[Warning: This story contains full spoilers for Marvel’s The Defenders.]

The Hand has been after the Black Sky ever since Marvel and Netflix launched their partnership with Daredevil, and the ancient organization finally got their wish in the form of Elektra Natchios (Elodie Yung). But it’s as the old saying goes: Be careful what you wish for.

Over the course of Marvel’s The Defenders, Elektra evolves from a singularly focused killing machine into an even deadlier version of the assassin who fell in love with Matt Murdock (Charlie Cox), the Devil of Hell’s Kitchen. In the sixth episode of the event series, Elektra makes her independence known through two brutal acts: first killing Stick (Scott Glenn), the man who raised her like a daughter for much of her life, and later killing Alexandra (Sigourney Weaver), the woman who raised her from the dead. From there, Elektra wields her role as the prophesied leader of the Hand in unexpected ways, pursuing the secrets to immortality as a means of staying alive forever with her precious “Matthew.”

At the end of the series, the world believes both Matt and Elektra are dead, crushed underneath the destroyed Midland Circle tower. But the final scene of the series reveals that Matt is still alive, healing his wounds in some unknown location. So what about Elektra? She already cheated death once. Is it possible that she’s been born again, again? For more on that possibility and the rest of her arc over the course of the series, The Hollywood Reporter turned to Yung.

'The Defenders' Showrunner Breaks Down That Shocking Death and Finale Twist

How much did you know about what was in store for Elektra on The Defenders when you wrapped the second season of Daredevil?

Not much, not when we wrapped. Pretty soon after, I knew that I was going to be a part of The Defenders, and I wasn’t surprised. They’re very secretive and they never want to tell you anything, but I knew pretty soon that she was going to do everything she ended up doing.

What was your reaction when you learned Elektra would emerge as the primary antagonist of the story, rather than just operating as an instrument of the Hand?

It just made sense to me. Elektra is quite a free spirit. That’s kind of her quest. She has to gain this aspect back over the course of the series. She’s brought back to life by Alexandra, and then she kills her. She kills her dad, she kills Stick. She makes the Hand work for her. But what she really wants is to be with Matthew.

When we reach these final two episodes, how much is this the Elektra we used to know versus the Black Sky she was destined to become?

I think she’s Elektra. She says it. “My name is Elektra Natchios, and you guys are going to work for me.” To me, she is Elektra. She’s back. But she has maybe new abilities. I’m not sure exactly how being brought back to life changed her. Is she completely human? Is she not? Can she die? I don’t know anything like that. It’s still obscure to me. My understanding, and the way I played her, is that it just kicked in: “I know who I am, and don’t mess with Matthew.” She uses them to get to her goal, which is 1) being free, and 2) being with Matthew. She wants to be with him forever, in a very weird and romantic way.

'The Defenders': Charlie Cox on What's Next For Daredevil

You see that as her ultimate goal — Elektra doesn’t want to find the substance purely for her own immortality, but also for Matthew’s immortality?

I think so. She says it to him in the way she says, “This is what living feels like.” I think she wants to share that with him. It’s like Romeo and Juliet. Let’s die together and maybe live forever, or let’s die together and you’ll finally see what living feels like. It’s what I’m feeling right now. I was dead, and now maybe you can live forever with me. This is what I understand. I thought it was quite beautiful and romantic.

How shocked were you when you read the end of episode six, in which Elektra kills Alexandra? What was your reaction when you learned you would be killing a character played by the legendary Sigourney Weaver?

I knew all of that from the start. I knew the arc. I knew everything. So from day one, I could not wait to kill her character. (Laughs.) And she couldn’t wait to be killed by me! We were like two kids. “Yay, we get to do this scene!” It was very fun. It was really good. The camera was right in front of her, and I was hiding behind her, then poof! We had to do it a few times. She was falling on the floor, and the blood was just flowing. We really enjoyed that moment. It’s a big twist in the story. I think it surprised the audience. We both enjoyed it a lot.

Alexandra doesn’t live long enough to wallow in the betrayal, but she viewed Elektra as a daughter of sorts. Does Elektra have any fondness toward Alexandra at all, or not really?

It’s a good question. I’ll leave it to people’s interpretations. What I enjoyed was being ambiguous the whole time. Hopefully people think sometimes that she was considering her as a mother, but maybe she was playing her. Maybe she was giving her the attention she wanted. Maybe she’s just playing the daughter to the mother because she knew she had no other options. I wanted to leave it to the audience. Up to this point, anything can be imagined about this relationship. Maybe Elektra from day one knew: “Okay, my name is Elektra, I know who I am, but where the heck am I? Who is this person?” Maybe she’s observing. Or maybe she really doesn’t remember who she is, and then she suddenly comes back on the day she kills Alexandra. I wanted to leave it open. I know what I played, but I think you can imagine anything. 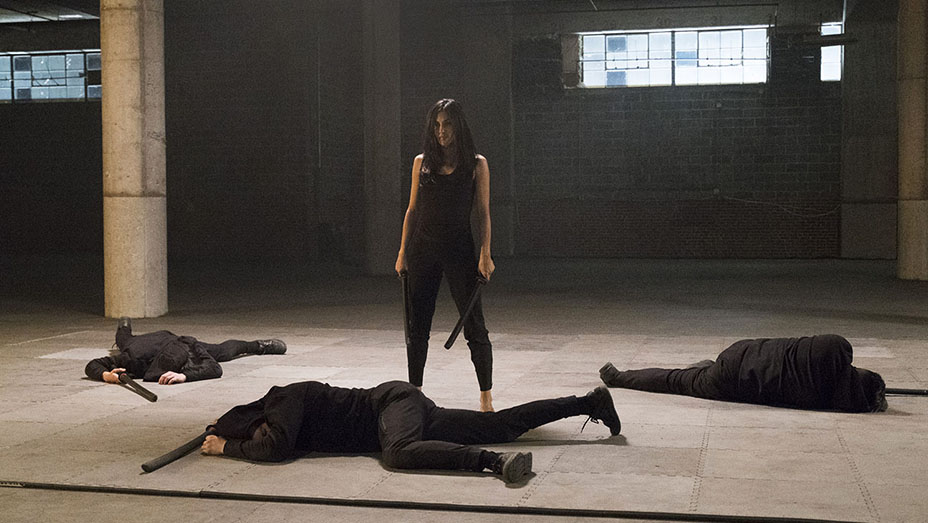 How about in terms of killing Stick? This man was her father figure for so long. Was there any emotion to it?

There was not. Elektra is kind of a sociopath. Maybe she just wanted to cut the ties. She just wanted to be free above anything. On the day, I didn’t play it as, “Oh, it’s hard for me.” No. I just killed the guy. She wants to be by herself. She’s a free spirit. She’s always been. And then she got caught in this war. I think what she wants most is to be free and with Matthew.

Whatever else she is, Elektra does not seem like the type of person who would respond well to being used as an instrument in some larger plan, or being told that she has a destiny that’s not of her own choosing.

No. Screw that. Not at all. Not into that at all. (Laughs.) She says that in Daredevil, when they tell her that she’s the Black Sky. They use the pronoun “it,” and she says, “Call me ‘it’ again. Call me an object again. I’ll chop you in half.” Something like that. That’s who she is: “Don’t even think of using me. I’m not your friend. I’m not your object. I’m not your daughter. I’m none of that. I’m just Elektra. Back off, and let me be.”

What do you remember about filming the scenes at the start of episode three, where we see Elektra come back to life, covered in the substance? It looked pretty nasty.

They offered me not to do it, because it really was disgusting to do. But to me, it was important to be put in the sarcophagus and just have the opportunity to be born again. I wanted to go through that. So I did it! And yes, it was very sticky and warm. It was sweet, like corn syrup. It’s disgusting. It goes everywhere. You do not want to do it. (Laughs.) I’ve done it now. If ever Elektra has to do it again, or any other part where I have to do it again, maybe I’ll pass it next time. Been there! But for me, for this storyline, it was so important to feel this. To be put through a birth again. This is it. It’s like an animal being born. I wanted to go through the pain of it. I’m glad. It’s where she’s at at the beginning. She’s a brand-new person or animal at first. It was not fun to do, but it was worth doing it.

You were involved in so many fight scenes this season. Does one stick out to you as particularly memorable?

There were so many scenes. I just wanted to be on top of everything this year. I knew from day one that Elektra would be stronger than last year and I would have to have more fight scenes. To me as an actress, it was important to train a lot. The whole shoot was fine, not too hard, but it was all about constant focus and training throughout the whole thing. In every episode, she’s sent to fight. The one with Charlie at the end was very epic. It took us I don’t know how many days to do it. It was a long sequence and it was very hard. It was emotional, for both of us. We wanted to make it right, because this particular one wasn’t just a fight for a fight. It’s love and fighting. What do you feel when you have to go through this with the person you’ve lost and the person you’ve loved and still love? That one was very hard.

We don’t know what happened to Elektra at the end of this show. We know Matt is alive, but no update on Elektra. Will we see her again in the future?

I hope so! I really like Elektra. It just feels unfinished. She’s done all of that, and now what? Where is she? And he’s alive. So I’m hoping their paths will cross again. I want to know where she lives and what she does and if she’s enjoying life and all of that. (Laughs.) But I don’t know what’s next for her yet — or if it’s the end.

There’s no way that’s the end.

I hope not! She’s such a great female character. She’s so crazy and strong and she has so many flaws. You kind of feel for her. I do feel for her. It’s not easy to be who she is. There’s humanity in there. It would be interesting to explore that again, especially after what just happened. But we’ll have to see what Marvel will do with her. I have no clue.

Stay tuned for more coverage of The Defenders.