[Warning: This story contains spoilers through the first four episodes of Marvel’s The Defenders.]

When it comes to Marvel’s The Defenders, it all starts with The Fisher King.

No, that’s not the name of a Marvel supervillain, though it certainly sounds like one. Instead, it’s the 1991 Terry Gilliam film about a disgraced shock jock and a homeless man who find friendship and redemption in one another. The film features a memorable scene set inside a Chinese restaurant, impactful for many reasons — but for the purposes of Marvel’s Netflix initiative, impactful in that it’s what inspired the way Matt Murdock (Charlie Cox), Luke Cage (Mike Colter), Jessica Jones (Krysten Ritter) and Danny Rand (Finn Jones) sit down together for the very first time in The Defenders.

“For me, I didn’t know much about what the show was from the very beginning,” Defenders showrunner Marco Ramirez tells The Hollywood Reporter. “A lot of the process was discovery. But I always had this image of the four of them sitting around at a table eating at a Chinese restaurant and looking at each other, in one place. I didn’t know when it would happen, whether it would be at the end of the series or earlier, but I knew it was going to happen. Cinematically, it’s very similar to a scene from The Fisher King, a very different movie but one that feels very New York to me. I always wanted to get that Chinese restaurant meeting together. I didn’t know it would be the first time they met or the last time they met, but I knew it was going to happen.”

Ultimately, The Defenders‘ Chinese restaurant meet-up wound up at the halfway mark of the series. It takes three full episodes before all four of the main characters are in the same scene at the same time, and even then, it’s only for a brief (though admittedly memorable) action scene at the end of episode three, which takes place in a hallway, one of the hallmarks across all of the Marvel-Netflix projects.

“It’s not like someone comes in and asks, ‘Hi, where’s your hallway fight?’ It’s just organically the place,” Ramirez says, laughing at the mention of how frequently hallways are used for fight scenes in the Marvel Netflix Universe. “It’s a bit of a signature of these shows. If you have a great signature, you use it.”

“It was a really long shoot,” says Jones of the scene, in which Iron Fist stands front and center in the hallway fight against members of the Hand, including Sigourney Weaver’s Alexandra and Elodie Yung’s Elektra. “But leading up to that, I’d got a big fight scene with about 10 Hand members, and I remember just feeling it. It was a big [shoot] — from the scene before that into the hallway fight scene, that was just a grind.” 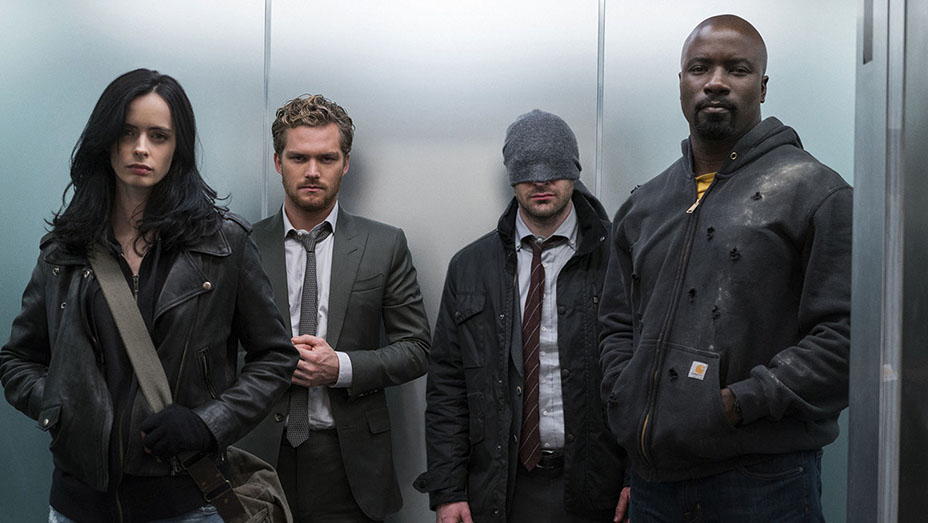 After the battle, in which all four of the Defenders converge on the same location for different reasons, the heroes not-quite-yet-for-hire seek shelter inside a nearby Chinese restaurant, hiding out from the rest of the Hand. At this point in the story, some of the Defenders have already crossed paths: Luke and Jessica already have history, Luke and Danny beat the snot out of each other at the end of episode two, and Jessica and Matt are on each other’s radar all through episode three. When the four of them get together, however, there’s an opportunity for everybody’s backstories to come to the surface, with a fair amount of incredulity shared between future teammates. (Somehow, the bulletproof Luke Cage has a hard time accepting Matt Murdock as a blind superhero, and vice versa.)

“That was some of my favorite stuff,” says Cox, who plays Murdock. “Because that’s the stuff that was the least plot-driven. It was all character-driven. It was that episode where we come together for the first time and we kind of explain who we are and why we’re there and who’s what, and some of us are keeping secrets, some of us aren’t, and that’s the stuff that I think the fans are really gonna love. It’s all character-driven, which is my favorite stuff to do.”

With that said, it’s a bit jarring that it takes four full episodes before all four Defenders are standing together, side by side, shoulder to shoulder, fully committed to fighting alongside one another — with an assist from Scott Glenn as Stick, on top of it. For his part, Ramirez says the decision to delay the assembling of the Defenders has roots all the way back in the very first Marvel-Netflix series: the first season of Daredevil, which spent 12 out of 13 hours keeping Matt Murdock away from his iconic costume.

“We had a lot of conversations in the writers room about how long could we wait to keep Matt in the black Zorro costume and cargo pants,” remembers Ramirez. “How long would the audience stay with us? It was a big risk. [We] took that risk in a big way, and I think it paid off in droves. All of us learned at that point that the audience that comes to these shows is pretty sophisticated. They don’t need dessert right up front. They are willing to wait and be patient with us so they can have a very big payoff.”

What’s more, Ramirez believes it wouldn’t have made sense to assemble the Defenders earlier than the end of the third episode — and really band them together by the end of the fourth — due to how much these heroes are used to operating on their own.

“To me, it was important that these characters got to the story of The Defenders in their own time, so that it never felt like they were being recruited for a corporate project called The Defenders,” he says. “These are all very independent people. Of all the superpowers that somebody like Jessica Jones has, the real power is how independently minded she is, and how she refuses to take anyone’s shit. The thought that she was just going to get recruited to work on a team just didn’t work. She needed to get to that point in the story on her own. We needed it to be realistic in the timing, and we needed everyone to learn the back stories and everything they needed to know in order to understand these characters and get to it on their own. When they’re finally facing [the Hand] together, it feels like psychologically, story-wise, they’ve earned it.”

Follow our coverage of Marvel’s The Defenders for more interviews, news and deep dives.

Jenna Marotta contributed to this story.