After four years in development, Marvel and Netflix’s ambitious The Defenders event series is finally here, assembling four different heroes and shows in one eight-episode endeavor.

The stars of Daredevil, Jessica Jones, Luke Cage and Iron Fist and members of their supporting casts are brought together for a communal battle to defend New York City against the pervading threat of the Hand and an enigmatic enemy known as Alexandra (played by Sigourney Weaver). It takes some time before the Defenders actually come together for a common cause, and in the interim, the series itself almost feels like four different shows happening at once: quick-cuts of New York subway trains, bridges and other pieces of the city’s iconography serve as separation points between the noir-heavy Jessica Jones (Krysten Ritter) scenes and the red lighting of the Daredevil (Charlie Cox) sequences, for instance, lending to an early sense of separation before the big team-up.

According to showrunner Marco Ramirez, the distinction between characters and their scenes is by design, so as to make the moment of their coming together even more impactful. Here’s what Ramirez told The Hollywood Reporter about those storytelling choices and more, including what the show owes to The Avengers, the decision to cast the series’ antagonist in a fairly sympathetic light, and just how much viewers need to remember from the four different Marvel-Netflix shows that have already passed.

The Defenders is the culmination of four different TV shows. How important is it that everyone has seen those four shows before watching this one? Is it necessary to enjoying The Defenders?

It’s not necessary. It was always part of the design, that Marvel and Netflix always wanted us to make a show where audiences could dive into it without having seen any of the others. You could just hypothetically come in and watch The Defenders. With that said, if you have seen the other shows, the idea is to never make a show that’s redundantly telling you something you already know about these other stories. That was the trapeze act of figuring out the writing, making sure to never be expository but also make sure it wasn’t a requirement that you would have to do seven weeks of homework, or whatever the math is on binge-watching five seasons of television.

So, if someone hasn’t seen Iron Fist, for instance, they won’t be lost on Danny Rand (Finn Jones)?

Sure, yeah. Exactly. If you haven’t seen any of the other shows, you should be able to pick up and figure out that that’s how this person fits into this world. It could be your first [show]. Marvel has a corporate slogan in the comic books world, that every comic book is somebody’s first comic. We tried to continue that here a little bit. You don’t have to have seen the entirety of any of the individual shows in order to get this one.

What was the biggest challenge of pulling this show together?

The biggest challenge was that the tonal differences between all of the [previous] shows are so vast. That works to each of the shows’ credit. Jessica Jones is very different from Luke Cage, which is very different from Iron Fist, which is very different from Daredevil. When you then have to think about combining those in the same dish, it kind of feels like, “Wait a second. What’s going on?” But what the writers realized and the directors realized and I realized while running it is, the very problem of the show is the key to entering the show. Yes, it doesn’t make sense that Jessica Jones and Danny Rand are sitting at the same dinner table. She should hear his story and say, “That doesn’t make any sense. Your chi is bullshit, your backstory is bullshit, and all the dragon stuff doesn’t make any sense.” That’s actually the fun of the show, watching that interaction between Matt Murdock and Luke Cage encountering each other and saying, “How are you bulletproof?” and “What do you mean, you’re blind?” The interactions should make the show more fun, not take you out of it. 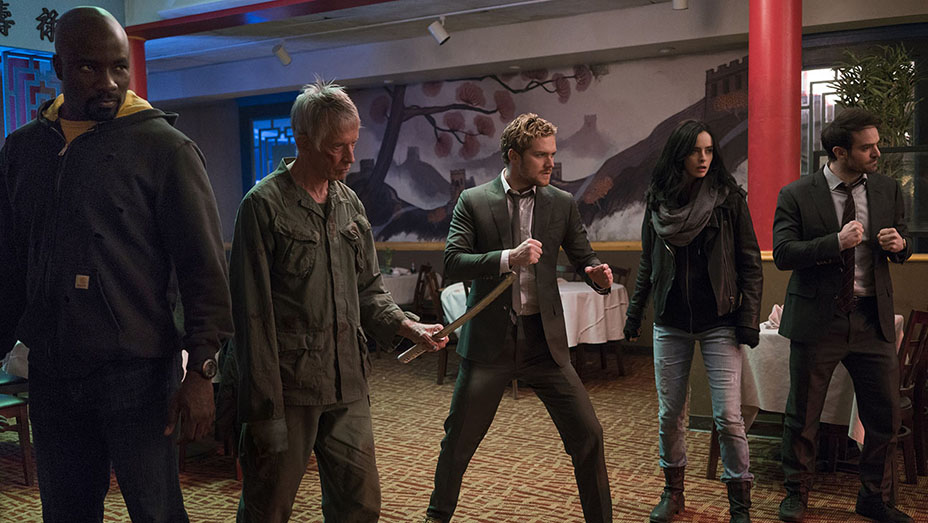 Certainly in the first four episodes, there’s a feeling of what you just brought up, of almost the four shows happening simultaneously within this series. The Luke Cage scenes feel very much of a piece with the Luke Cage series, for instance. Is that by design?

Yes. As every one of these shows start folding into each other, we wanted them to feel like the most optimal versions of those shows. The early Daredevil scenes should feel like the most Daredevil we could possibly go, with the most red lighting and filters. The Jessica Jones scenes should feel the most film noir with violet colors. The idea then is that when they start to cross-pollinate, we see something else start to emerge, and that’s what the identity of this show is, which is kind of a combination of all the visual and sonic elements of each of their individual worlds.

Given the premise, one enters The Defenders expecting it to be an ensemble show. But for you, do you feel one of these heroes has an emotional throughline that carries us forward in the series more than the others? For instance, Matt has an extremely personal stake in the story, given the involvement of Elektra (Elodie Yung).

It’s hard for me to tell, having worked on it, and trying so hard to make sure that that didn’t happen. Honestly, I would like the ideal answer to be no. I don’t want this to feel like it’s so-and-so’s show and everybody else is visiting. It should feel — and that’s why we spent so much time on this in the first two episodes — that we are invested in every character. Yes, Matt and Elektra absolutely have history. But Elektra and other characters on the show quickly have history of their own that we get to see unfold. Danny Rand certainly has history with the Hand. While the Matt-Elektra relationship is very strong and is a very strong part of what makes the show tick, I don’t think it’s in any way the only backbone of the show.

Sigourney Weaver plays Alexandra, the villain of the piece. When we first meet her, she’s receiving bad news about her health. What was the goal in introducing your villain in a fairly sympathetic light?

It was exactly that: It was about not painting her as a mustache-twirling villain who wants to do nothing but bad things to this city. Each of these shows have featured very compelling antagonists, whether that’s Vincent D’Onofrio as Wilson Fisk or Jon Bernthal as Frank Castle or David Tennant as Kilgrave. There are a lot of very intellectually interesting people, some of whom aren’t necessarily “bad people.” I would go as far as to not call them villains; they’re just antagonists. They want the opposite thing that the heroes want, and that doesn’t always make them bad. To me, it was important to introduce Alexandra in a way where she’s actually vulnerable. She’s not a “supervillain.” It was also very important to Sigourney. She wanted to play a character who wasn’t two-dimensional. If she was a member of the Hand, she didn’t want to be a nihilistic dark force. She wanted to really enjoy life. She wanted to enjoy living. She wanted to embrace the positive in what they’re doing.

This is the first time it’s happening on Marvel TV, but it’s not the first time a bunch of disparate heroes have joined together in a live-action Marvel project. How much did you look at The Avengers as inspiration for The Defenders, or did you consciously avoid that film as you were crafting the series?

When you have literally the footprints that The Avengers had, there’s kind of no way to avoid the comparison and no way to avoid referencing it in the writers room. It’s an incredible achievement and a great story told really well. But to me, aside from that, in the formation of the show in the writers room, it was important to me to talk about story templates and influences. We talked about The Dirty Dozen and Seven Samurai. We talked about movies and cinematic stories where characters came together who did not want to come together, who had their own in-fighting but ultimately came together to fight something bad in some way. I would like to think the influences are wide in that way.

Follow our coverage of Marvel’s The Defenders for more interviews, news and deep dives.