When Downton Abbey opens its doors on the big screen, all of the characters from the beloved Crawley family drama will be back in place — a feat that the reunited team behind the movie adaptation deemed unlikely when wrapping the Emmy-winning PBS and ITV series back in 2015.

“I didn’t believe the movie would happen,” series creator Julian Fellowes admits to The Hollywood Reporter. “Because a lot of my favorite series didn’t have a movie, I didn’t feel it was inevitable in that way. But gradually, it seemed to present itself as inevitable and after about a year, I started thinking about what was going to go into it.”

When Downton Abbey ended after six seasons, the idea to revisit the critically praised and hit period series with a theatrical spinoff was in the air — but nothing was confirmed. When THR spoke to the producers and cast at the film’s New York City premiere, many used the word “impossible” when looking back on the idea that the massive ensemble cast (featuring 18 main characters) — including the legendary Maggie Smith — could be reunited for a movie down the line.

“At the season-six wrap party, people said, ‘See you for the movie,’ and I dismissed it,” says Allen Leech, who reprises his role as Lord Grantham’s widowed son-in-law Tom Branson in the Focus Features and Carnival Films movie, which bows Friday. “Not because I didn’t want to be a part of it, just because I never thought there would be an opportunity to get all these people back together again.”

Adds Laura Carmichael, who plays Lady Edith Crawley: “There really were the ‘It’s never going to happen’ moments and ‘I think it’s happening next year… oh, no, it’s not.’ There was all of that. So when we had the dates, we were still crossing our fingers until the first day and were just so pleased when it all came together.”

It was the looming idea of a big-screen adaptation that helped to soften the blow — for both the audience and cast — when the series signed off. “We ended the TV show a bit earlier than we might have done,” says producer Gareth Neame. “We re-upped the actors in season four for two more years and I knew that we probably wouldn’t be able to hold everyone together beyond that. If we had managed to keep the cast, we could have gone another year or two. We felt that by ending in season six, we quit while we were ahead. But I think we all felt good about quitting when we did with the knowledge that a movie would hopefully follow.”

Neame says he indeed had a plan for the film, but didn’t know if he could pull it off. “They had a nice break of about three years and they were really excited to come back again,” he says of the response once he began reaching out to the actors. (The cast keeps in touch through a WhatsApp chat, according to Phyllis Logan, who plays head housekeeper Mrs. Hughes.) “There’s a real difference between coming back every year for seven months to do a TV series as opposed to coming back for a few weeks to shoot a movie. They did all want to come and do it, it was just that everyone had to commit together.”

Admitting that it “took a while” to corral the cast from all corners of the globe and get them signed on for what would be a 10-week shoot, Leech says the deal stage of the process had a snowball effect: “We’d ring around and read the script — and I was so delighted that Julian gave me such a lovely storyline that I said, ‘I’d love to do it! Who else is in?’ Suddenly Hugh [Bonneville] is in, Michelle [Dockery], Laura [Carmichael]. And then the final call we got was that Maggie [Smith] had signed and we were like, ‘I think we’re going to do this.’ She’s the ‘Notorious MAG.’ It wouldn’t be right if she wasn’t last.” 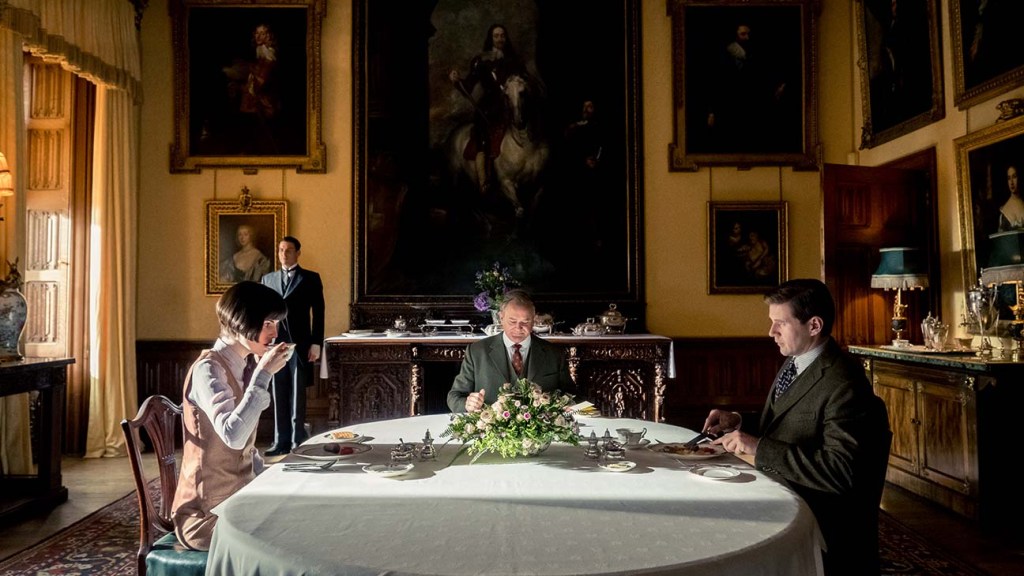 Beyond the barbed zingers fans have come to expect, Smith’s Dowager Countess indeed plays a pivotal role in the 1927-set film when the Crawley family and their loyal servants pull out all of the stops to get Downton ready for a royal visit from the king and queen. Fellowes said the Michael Engler-directed film — which feels like a familiar, extended episode but more grand and with a big-screen budget — was designed as an escapist feel-good story, especially amid Brexit. But subplots still tug at politics and certainly the heartstrings with surprising developments for a handful of fan-favorite characters.

“I hope the fans disappear into a wonderful fantasy world for two hours. And I hope that they enjoy this page-turner — because it is a page-turner,” says Penelope Wilton, who plays the onscreen foil to frequent scene partner Smith as Isobel Crawley.

The collective hope from the producers and cast is that the audience will make the trip to the theater to revisit the TV family — and if they do, a sequel should be in store. “All we have to achieve here is to get the fans out of their homes and buy tickets to go and see it, because people are used to watching at home. You’ve got motivate them to come out and see it in theaters. And if it does really well, then we’d do another one,” says Neame.

Box Office: With 'Downton Abbey,' Baby Boomers Flex Their Muscles at the Multiplex

The movie, meanwhile, got off to a strong start over its opening weekend abroad, bringing in around $12.2 million across 17 markets, and domestic first-day advance sales have outranked any 2019 U.S. drama. “The critical thing is how we do with the domestic box office. Hopefully from there we’ll have a sense of how the film may run and fare internationally,” the producer adds.

Neame says that a year ago, he would not have contemplated the idea of doing another film because of how complicated it was to get all the pieces on the Downton chess board. (“I described it at the time as being more complicated than Brexit,” he says). Now, however, he says there are some ideas being kicked around for a sequel. The film indeed ends with several avenues to explore, should the Downton franchise continue.

“We’ve got the beginnings of ideas of what we might do next — if that would happen,” says Neame.

“What I love about what Julian always does is when it looks like he’s finishing a storyline, he’s actually starting one,” adds Leech. “It would be very interesting to see what would happen. I think we would all be up for it. It all comes down to how this one does. If people really love it and there really is an appetite, then why wouldn’t we do it?”

Stars Dockery and Carmichael say they “absolutely” would do more should the franchise continue. “We love making the show so I hope people enjoy it. It would be really cool to make another,” says Carmichael. “We want to see if everyone likes this one — but everyone is asking about the sequel!” echoes Sophie McShera, who plays assistant cook Daisy. “We love working together and we would always want to work together if there is an appetite for it.”

Still, Fellowes is waiting to see the box office returns: “I just feel I have to wait for the public’s response to the movie and see, did they really like it? Has it gone well? It’s a combination of the [box office, audience buzz] all of it, to be honest, and then you get a picture of whether this movie landed. I think you can get a sense of whether it worked or not. And if we do get that sense, then we will have that conversation.”

In the meantime, Leech hopes fans walk away feeling the pic’s collective message of hope: “Downton Abbey has always been about getting through and adversity and a lifetime sometimes of struggle and sometimes of opulence — and it always comes down to the fact that you have to be a good person. The film really has elements of that throughout.”