Scrooge McDuck and his nephews are making more DuckTales, woo-oo!

Disney XD announced earlier this year that it was reviving the animated series based on the classic show about Scrooge McDuck and his grandnephews Huey, Dewey and Louie. Fans got a first look at the reboot Aug. 12 with a one-hour TV movie, but the series officially kicks off with two new episodes Saturday, Sept. 23 (airing at 7 a.m., 11 a.m., 2 p.m., 5 p.m., 8 p.m. and 10:30 p.m.). Each will also be available on the Disney XD app and Disney XD VOD on those same dates.

And yes, the beloved “woo-oo” theme song from the original will be present, with a new version performed by singer-songwriter Felicia Barton (Dancing With the Stars). (The timing couldn’t be better, as the original series celebrated its 30th anniversary Monday.)

Ahead of the series premiere, The Hollywood Reporter spoke with executive producer Matthew Youngberg and co-producer/story editor Francisco Angones, both fans of the original — Angones even incorporated the theme song lyrics into his wedding vows — about why they wanted to renew this series, how they approached the new version and what elements they knew they had to keep.

What was the impetus for bringing back DuckTales? Why was this series chosen to revive?

Francisco Angones: [Disney executives] knew they were sitting on this property that helped build a studio, Disney TV Animation. They’d done a bunch of other animated shows before, but this was really the show that put the studio on the map. Coming up on the 30th anniversary, it seemed like the [right time] to bring back these pop culture icons into an adventure series. So Disney [execs] thought, “Why don’t we just do the show that started it all?” 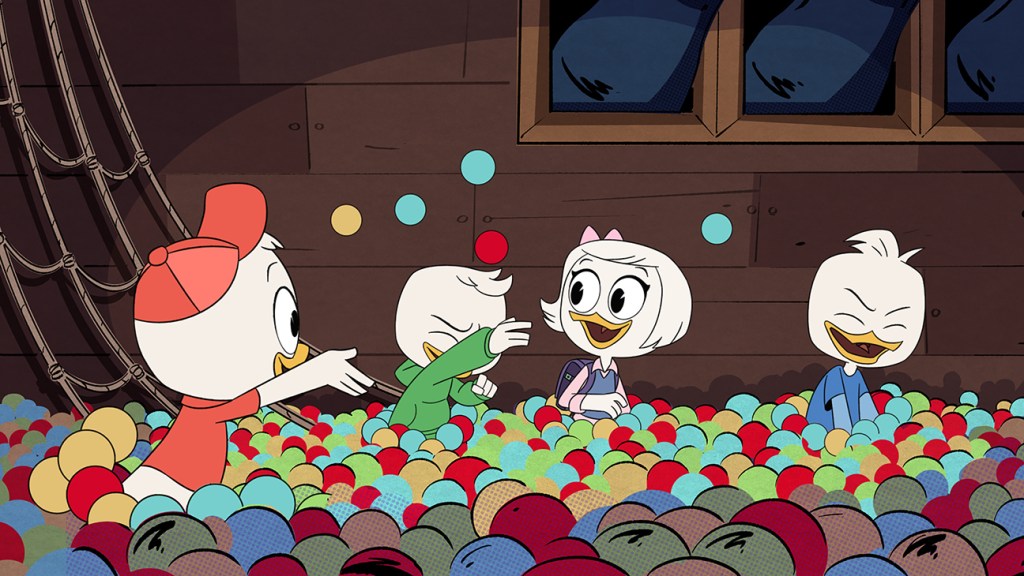 What was the development process like? How did you decide what to update and what elements to keep?

Matthew Youngberg: When we started out in development on this, first and foremost we wanted to make sure the show was true to the original series. We wanted to re-create the feeling we had watching the original series as a kid and creating that feeling for a new audience. We knew there were certain elements about DuckTales that we had to keep. There are certain things that made DuckTales, DuckTales. One, of course, was the relationship between Scrooge and his nephews. Also, there are very specific DuckTales characters that weren’t on any other TV series or short — like Launchpad McQuack, Betina Beakley, Webbigail — we knew we had to have them on the show.

Angones: It’s funny because a lot of fans our age don’t realize that DuckTales is based on the original Carl Banks comics. One of the things we responded to from the original was the notion of family. Carl Banks and subsequent writers built out of Scrooge’s family and how their relationships were so important. It was kind of the original blended family — not a kid and a parent but an uncle and triplets. The pilot was a good opportunity to seize on the modern notion that family is what you make it. Everyone around you who is important to you can be considered family. Our guiding light was how to take the original characters that everyone knew from the show and [make them] feel like an actual family.

Angones: One of the key ideas was to differentiate Huey, Dewey and Louie. They were much different before, but now we have an oldest, middle and youngest. Scrooge is a spy, scholarly, adventurer, and we were lucky to get David on board. A lot of the cast were fans of the original.

Youngberg: We really tried to root everything in the characters themselves. When we were casting, we were looking at who the characters were and how they can be the most funny, really, from the point of view of the kids. The most drastic casting change from the original was that the kids were pretty interchangeable. Many jokes came from that. A lot of people don’t even know the colors [that Huey, Dewey and Louie wear]. They just know them as a group. We needed to differentiate the characters themselves so they sound like different characters. The actors really embraced those new characteristics, and we just lucked into the best people that we could. We auditioned so many people and listened to so many different takes. We got lucky with this cast.

Angones: We went back and rewrote the first couple of episodes specific for their voices because they got their characters implicitly. It’s [in the vein of] Modern Family and Arrested Development, where they’re playing off each other. You’re not always able to achieve that in animation. 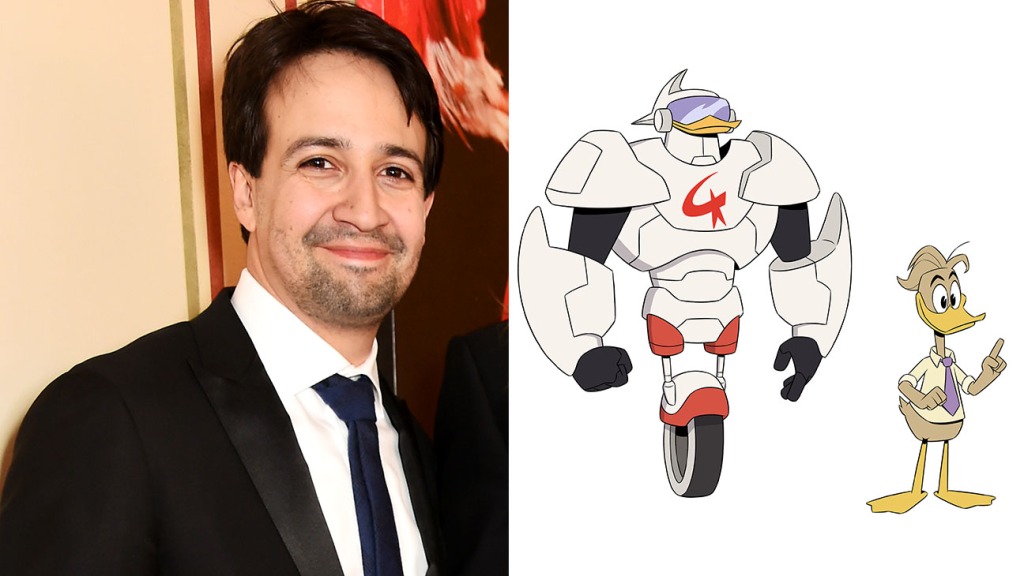 And Lin-Manuel Miranda is recurring as Gizmoduck. I understand he’s a big fan of the original.

Angones: Lin-Manuel was a special case. We really shot for the moon with him. We heard he was a fan of the original, and we had the character of Gizmoduck from the original, and one thing in updating and making the show more relatable was diversity. We know they are all ducks and dogs and pigs and stuff, but you have to have some representation there. Gizmoduck is an idealist, a fast-talker, running a million miles a minute, and he has tons of big ideas, and he’s impossibly sincere. We thought, “Well, that’s Lin, but we’ll never get him.” We wrote the episode as if we were getting him, full well knowing we’d never get him. We took a shot in the dark and wrote a letter to him about the importance of having a Latino superhero. I’m Cuban-American, and growing up in Miami, there was not a lot of Latino representation in superheroes. Even today at the multiplex, the main superhero may get a token sidekick who’s Latino. I sent a letter to Lyn saying that, and lo and behold he actually said yes for some dumb reason [laughs].

What was your reaction?

Youngberg: It’s really exciting. It helps us feel like we’re on the right track. We love the cast we have, and adding him [helped] make this the show we wanted to make. It’s rare to do something that kids your own kids can watch that you also loved as a kid. [Many in the cast have said] it’s really nice to be on a show that they can share with their family.

Most people have such an affection for the theme song. I know you kept that for the revival [with an updated version]. Seems like that was a no-brainer!

Angones: Oh, we had to. When we were talking about the things that had to be in this, the No. 1 question we got was, “Are you keeping the theme song?” We really shot ourselves in the foot with this one. We’re holding ourselves to the high standards of the original series, and everyone is saying, “Oh, you better not mess this up!” A lot of people have high expectations, and we are going to meet every single one and pass. Or fail [laughs]. Those are the options.

Youngberg: Our goal in mind from the beginning is to make sure this feels like DuckTales, and the fan response has been great. I’m really happy to see how people not only like what we’re doing in terms of the jokes but also the connection with the characters, which is the most important thing for us, because you can watch anything for adventure nowadays. Everything is at your fingertips. But to have viewers keep coming back because they’ve connected with the characters, or they’ve fallen in love with the attitude of a certain character, that means a lot and it’s what we set out to do. It’s the best show on TV — better than half of the seasons of The Wire [laughs]. 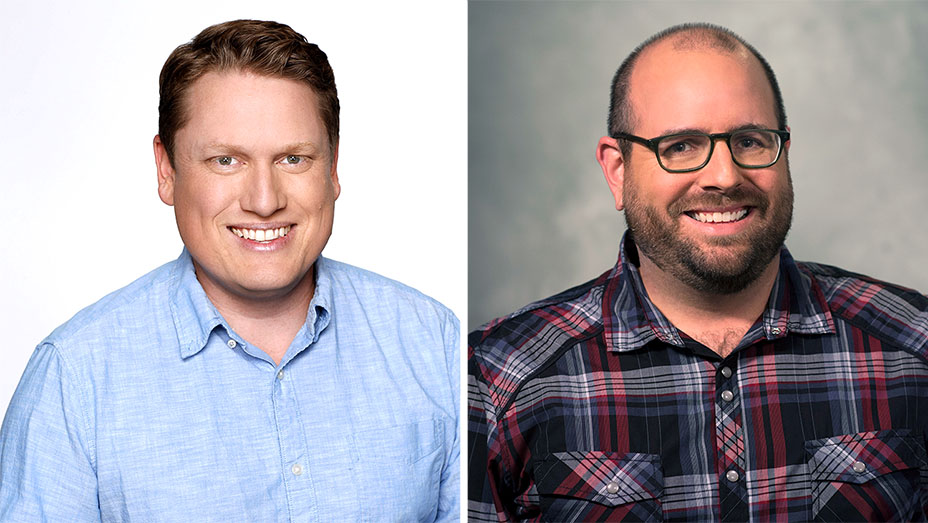 'DuckTales' Theme Song Gets an Update for Disney XD Reboot