Dustin Diamond, who spent 13 seasons as the goofy nerd Screech on the Saturday morning sitcom Saved by the Bell and its various iterations before his life and career took a turn for the worse, died Monday. He was 44.

The cause of death was carcinoma, his rep, Roger Paul, told The Hollywood Reporter. The actor was diagnosed with stage 4 cancer three weeks ago and was receiving treatments at a Florida hospital.

“In that time, it managed to spread rapidly throughout his system; the only mercy it exhibited was its sharp and swift execution,” Paul said in a statement. “Dustin did not suffer. He did not have to lie submerged in pain. For that, we are grateful.”

When he was 11 and in the fifth grade, Diamond beat out 5,000 other hopefuls in 1988 to land the role of Samuel “Screech” Powers on the Disney Channel comedy Good Morning, Miss Bliss, the forerunner to Saved by the Bell.

“The hardest thing about being a child star is giving up your childhood. You don’t get a childhood, really,” he said in a Where Are They Now? interview for OWN in 2013. “You’re a performer. You have to know your lines and rehearse and practice, making sure you are the funniest and the best you can be. Because if you weren’t funny, you could be replaced.”

In the ensuing years, Diamond began a new career as a stand-up comic (he said he had been favorably compared to George Carlin); beat up a much older Ron Palillo (Arnold Horshack of Welcome Back, Kotter) on Celebrity Boxing 2; shed some pounds on Celebrity Fit Club; entered the ring with Dennis Rodman and Frank Stallone on Hulk Hogan’s Celebrity Championship Wrestling; and appeared on World’s Dumbest and Celebrity Big Brother.

In 2006, Diamond was behind Screeched — Saved by the Smell, a 52-minute sex tape that involved him and two women. Later, he said that a “stunt person” stood in for him, with his face added during editing.

“It’s the thing I’m most embarrassed about,” he said. “The rumor that I think had been put on TV was that Paris Hilton had made $14 million off [her] sex tape. My buddy said, ‘Fourteen million? Holy smokes! Where’s the Screech sex tape? You’ve got to be worth at least a million.’ I thought, ‘Yeah, maybe.’ … I got some money off of it, but it wasn’t worth the fallout.”

Three years later, Diamond shared salacious behind-the-scenes tales about his TV show in the book Behind the Bell. After it came out, he said it was ghostwritten and he wasn’t given a chance to remove some of the stories that were created from some “offhand” comments that he had made to the real author.

In 2015, Diamond was convicted of disorderly conduct after he stabbed another bar patron in the armpit with a switchblade on Christmas Day 2014 in an incident involving his then-fiancee. He served three months in jail before being released in April 2016.

When the Peacock streaming service unveiled a follow-up Saved by the Bell series in November, original stars including Mark-Paul Gosselaar, Elizabeth Berkley, Mario Lopez and Tiffani Thiessen were back, but Diamond was not. Screech, it was explained, was living on the International Space Station with Kevin, the robot pal that he built.

'Saved by the Bell': TV Review

“We are aware that Dustin is not considered reputable by most. He’s had a history of mishaps, of unfortunate events,” Paul said. “We want the public to understand that he was not intentionally malevolent. He — much like the rest of those who act out and behave poorly — had undergone a great deal of turmoil and heartache. His actions, though rebukable, stemmed from loss and the lack of knowledge on how to process that pain properly. In actuality, Dustin was a humorous and high-spirited individual whose greatest passion was to make others laugh. He was able to sense and feel other peoples’ emotions to such a length that he was able to feel them too — a strength and a flaw, all in one.”

After Gosselaar was hired to star as Zack Morris on Good Morning, Miss Bliss, he pushed for the blue-eyed Diamond to get the part of his best friend in junior high, Screech. (Diamond had appeared in 1987 on the syndicated TV comedy It’s a Living and in 1988 in the film Big Top Pee-wee.)

“The thing is, I was 11 when we started, and [his castmates] were 14, 15 years old,” he said. “I was kind of like the tag-along brother; when they were going into college, I was just going into high school. And at that age, it’s a huge difference. I was wacky and I was wild and real hyper.”

As he longed for Lisa Turtle (Lark Voorhies) and shared his first onscreen kiss with Violet Bickerstaff (Tori Spelling), Screech remained at the center of Saved by the Bell and its offshoots as the franchise moved to the fictional schools of Bayside High and California University and then back to Bayside, where Screech was now the assistant to bumbling Principal Belding (Dennis Haskins).

In 2006, it was reported that Diamond was selling T-shirts at $15 a pop in an attempt to stave off a foreclosure of his home in Port Washington, Wisconsin. He said he had filed for bankruptcy protection in California in 2001 and had gotten into a financial hole because his parents had spent money he had earned from Saved by the Bell. 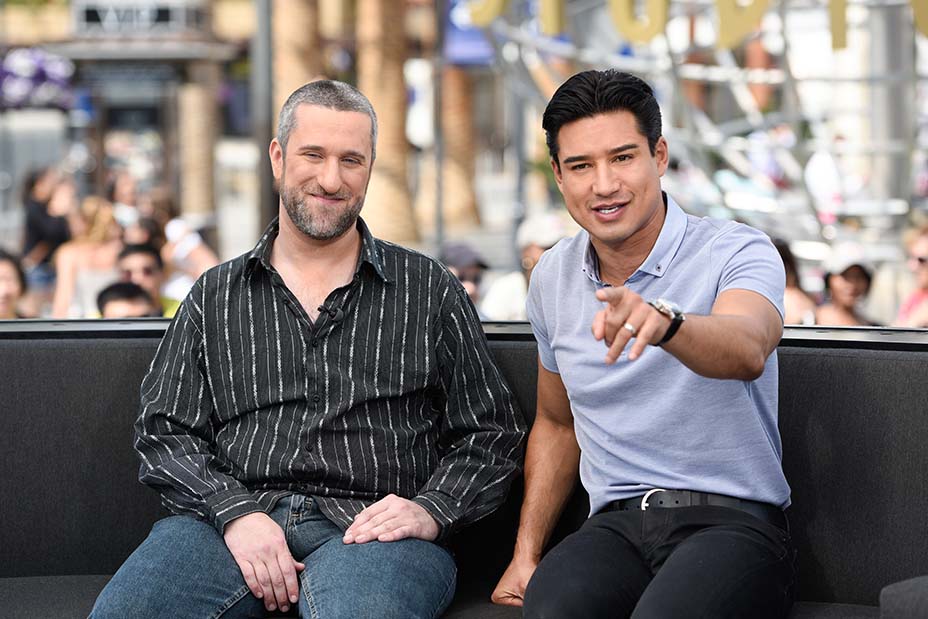 “I’m proud of the work that I’ve done when I’ve done it. It’s just, how do you come off such a phenom role of this Screech character and break out of that mold and do something different?” he asked Lopez in a 2016 interview on Extra. “I’d audition, and every single time they’d say, ‘Hey, we loved it, but we saw too much Screech in it.’ Well, I can’t change my bone structure, what do you want me to do?”

'Saved by the Bell' Cast Mourns Death of Dustin Diamond