Continue to The Hollywood Reporter SKIP AD
You will be redirected back to your article in seconds
Skip to main content
By Scott Feinberg, Michael Buckner
August 29, 2021 4:53pm

Ed Asner, the legendary TV actor, died Sunday at the age of 91. The Hollywood Reporter conducted the final interview and photo shoot of his career for an installment of our THR Icons series. Here, THR writer Scott Feinberg and photographer Michael Buckner share memories of their interactions with him.

A few weeks ago, Seth Abramovitch, my esteemed colleague at The Hollywood Reporter, had to take a last-minute trip out of town and asked me if I would assume responsibility for an interview that he had already scheduled with Ed Asner. I was delighted that Seth thought of me because Ed is someone whom I’ve always admired for his work, on screen and off, but I had never before had occasion to cross paths with him.

Ed and I connected via Zoom two Mondays ago. He immediately began busting my chops — teasingly, but with a straight face, of course — about the fact that I had a five o’clock shadow. Couldn’t I have been bothered to shave it for him?!

We had a great conversation during which I was tremendously impressed with not only Ed’s recall, but also his stamina (we spoke for over an hour), his humor (he was quick to joke about anything and everything, most frequently in a self-deprecating manner) and kindness (“I’ve never been asked that question before,” he said at one point, and “I like your style,” he added at another).

Sadly, it was the last interview Ed ever gave.

He died on Sunday morning, succumbing suddenly to “old age,” his publicist told me. Just two days prior, Ed was tweeting. Not long before that, he was recording messages for fans on Cameo. And less than two weeks before his death, he was chatting with me about his illustrious career, the effort to recall Gov. Gavin Newsom, President Biden’s challenges in Afghanistan and yes, my five o’clock shadow.

On the pilot episode of The Mary Tyler Moore Show, Ed’s Lou Grant famously told Mary Tyler Moore’s Mary Richards that he hated “spunk.” Ironically, it was Ed who had spunk in spades.

When I arrived to photograph Ed a few days before his interview with Scott, he was sitting at the dining-room table eating a snack when I arrived. He warned me to give him a heads up when I was ready because it was going to take him a while to walk to my set-up.

I pulled a low director chair with his name on it into his office and asked if it was okay for me to use it for the shoot.

I set up my backdrop and lights in his office, which was filled with Emmy statues and memorabilia from his career.

As I was unpacking my lights and loading film into my camera, his French bulldog came in and sniffed inside my bags. Ten minutes later, Ed’s housekeeper came in with a roll of my Kodak 400 Portra covered in dog slobber and teeth marks. Ed later told me his dog likes to chew on everything.

Once I was set up and ready to go, I invited Ed to join me in his office. “I’ll get there when I get there,” he teased in a gruff voice full of determination.

After Ed sat down, I briefly explained my game plan for the shoot.

“I’ve done this before,” he quipped.

I don’t usually direct someone as legendary as Ed, since he has probably heard it all before, but I did ask him to look around the room while I clicked the shutter. Ed would look left and grumble under his breath, then look right. He was speaking to himself, channeling the gruff but soft characters of his past.

Then, out of nowhere he started belting out “The Sound of Music” with that raspy voice that Ed is so famous for. As he finished the song, he looked straight into the camera lens and grumbled for me one last time. 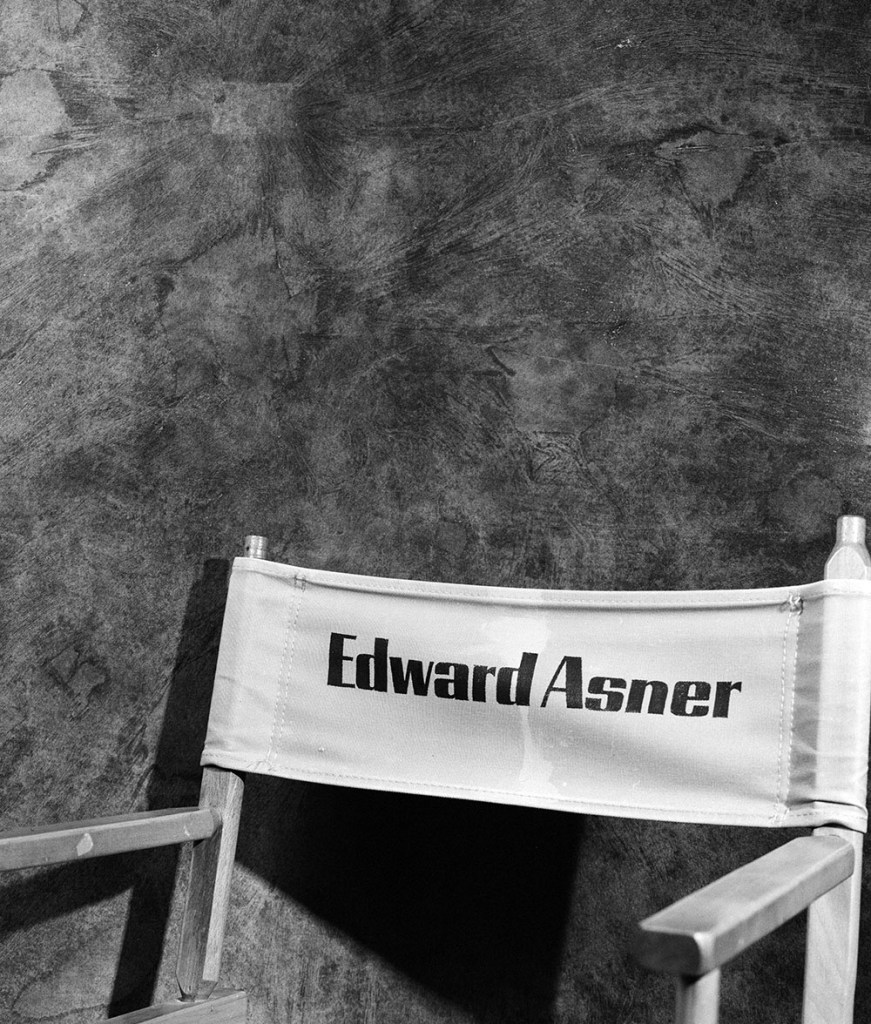