In the end, it does not work out well for Todd Alquist. The spider-hoarding, kid-killing sociopath played by Jesse Plemons, introduced in the sprawling fifth and final season of AMC’s Breaking Bad, makes a killing both literally and in the meth-cooking business over the course of his run — but when it’s all said and done, he’s one of the final few bodies on the floor, choked to death by Aaron Paul’s Jesse Pinkman.

The Todd sequence is one of the film’s greatest sources of comedy and darkness — perfectly Breaking Bad, as it were — and comes off as surprisingly to the audience as it came to Plemons, based on what he tells The Hollywood Reporter about reprising the role. Ahead, Plemons opens up about what was involved in bringing Todd back to life, if only for one last ride. 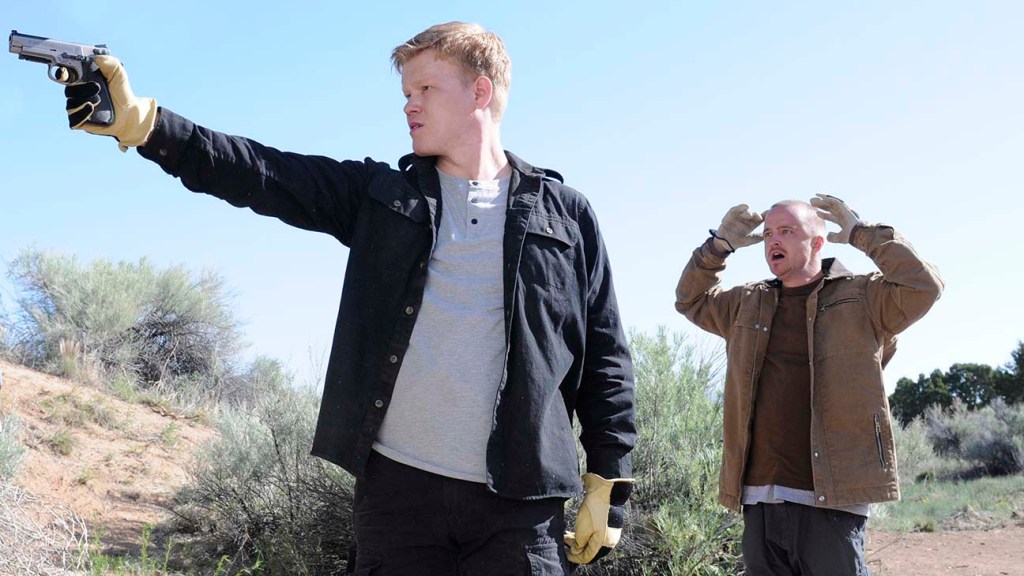 How were you approached for El Camino?

I was working in Atlanta. I had received a few missed calls from a number I didn’t know. I finally picked it up, expecting a telemarketer, but it was Vince and Melissa. They didn’t tell me anything, except that there was a movie happening, and they wanted me to come and read the script when I had a chance. It was out of the blue. I never expected to get that call, for sure. I went into their office in Toluca Lake, sat in this little room and read the script, and was just blown away. I don’t know…I had felt like everything was covered in the series. I didn’t know I was missing something with Jesse and Todd. But it really did give a deeper insight into that complicated relationship. It was so much fun to read, and so much fun to make.

There was so much secrecy surrounding El Camino, even from what you’re describing of how it came together for you…what was involved on your end, keeping your role under wraps?

The short version is I was just lying to people for months and months and months. (Laughs.) It was very strange at first! But then I started to enjoy it. It was great to flat-out lie to fans. When people asked if I was in the movie, I would say, “Yeah, I wish!” But with something like this, I knew it would be a great secret to keep. I never expected Todd to return, and so the fans didn’t expect it, either.

In the past few years, did you ever wonder about Todd, or ever think about getting back into that character’s skin — especially with Better Call Saul in existence, let alone the idea of returning for a Breaking Bad sequel movie?

I don’t know…it seemed pretty tidy to me. (Laughs.) He got a pretty deserving death at the hands of Jesse, and that was it for me. He’s dead. Fans of the show would ask me if anyone from Better Call Saul ever reached out to me. In my mind, that timeline wouldn’t work out, unless it was a much younger version of Todd, and I don’t think I’d be able to play that. So it was a surprise on all fronts to come back for this. I was pretty nervous to try and capture him again, because it was such a long time ago. It took a day or so, but Todd was still in there, I guess — which was…. (Laughs) It was fun to realize.

How did you set about rediscovering Todd, seven or so years removed from Breaking Bad?

I watched the show up until Todd entered the picture, right after I got the part. At that time, I wasn’t watching much of anything I had been in. I saw bits and pieces of Todd in ADR, but I don’t believe I ever actually watched the last two seasons in their entirety. I didn’t really want to watch those scenes, but I felt like I had to. I was watching them for the first time, which was interesting. I was trying to figure out what I had been doing. Especially in the first season, I really remember feeling like I had no idea what I was doing, because I had such little information. But in talking with Vince, I think we talked more about Todd during the filming of the movie than we did while making the show, which was interesting. I remembered enough to remember how I viewed Jesse. I don’t want to give all of that away, but there was enough buried deep down that I could draw on. The writing is just so good that it’s really easy to slide back into him. Aaron’s so incredible in his part. It was easier than I thought it would be.

Can you tell me more about the difference between approaching Todd for a film as opposed to episodic television? Did the movie clarify new things for you about the character?

With anything episodic, you’re learning more and more as you go. That’s part of what’s so exciting about television and limited series. But with this, I knew for certain this time that this was it. This was going to be the last time I ever [played this character]. There were a few details that I don’t know I had thought about. I maybe had thought about what Todd’s apartment looked like, but…

I’m sure you didn’t expect the pastels.

No! (Laughs.) I was really angry at myself that I didn’t see that coming, because it’s just so, so perfect. If Todd suddenly has a bunch of money, what would his apartment look like? Well, I think that is exactly what it would look like. (Laughs.) I remember listening to a lot of music while I was making the show, some of it was more for the effect I thought it would have on me as opposed to what I thought Todd might actually listen to. But I was mad that Vince figured it out first. Of course Todd listens to yacht rock. It was just too perfect. More so than any other questions I had or blanks that I felt weren’t covered in the show, it was the really strange relationship with Pinkman that was so much fun to explore. In a lot of ways, he looks at Jesse like he’s his best friend. Aside from the fact that he’s asking Jesse to help him bury his cleaning lady, this is kind of Todd on his happiest day ever. He doesn’t have his uncle looking over his shoulder. It’s just the two of them out in the world. It was really fun to play around with that. This is one of Todd’s happiest days ever, I think.

'Breaking Bad' and 'El Camino': A Tale of Two Endings

I had talked to Vince about that scene quite a bit. We wondered if Todd was a terrible singer, or maybe he’s okay. We landed on… well, maybe he’s okay! (Laughs.) Again, it was about thinking of Todd on his best day. When I realized there was a semi-truck passing me on the road, I had flashbacks to taking road trips as a kid and what that felt like. I assumed Vince would say [Todd signaling for the truck driver to honk] was a really funny idea, and maybe we could try it once, but let’s not do it more than that…but they really liked it.

Vince Gilligan has said that shooting the scenes in the Painted Desert were among the highlights of his entire Breaking Bad experience. What do you remember of that shoot?

I remember saying this to Vince and Aaron: it’s rare you can take a step back as you’re making something, where you can look around and see that every single detail is fully thought out, as it always is with Vince. Nothing is coincidence. There are some happy accidents, sure, but so much is accounted for and thought about. I remember thinking the writing was so good, what Aaron was doing was so good, the location was one of the most beautiful locations I ever shot in, down to the broom I was using to sweep up with…it just felt classic. It’s the only way I can describe it. It was so, so much fun. As a crew, we were all on our own little road trip through the town in Arizona. Getting to work with these people that you really love again, when you didn’t expect it? It felt really, really special.

That sentiment is shared by many in the Breaking Bad audience, between the expansion into Better Call Saul and now El Camino. Do you have a theory for why this universe has become so resonant with fans?

It’s the same thing that makes anything stand the test of time. It’s not any one thing in particular. It’s every component coming together, every detail. I remember when we were shooting the introduction of Todd in the movie, the silhouette from the pit. Vince spent maybe 30 or 40 minutes trying to get the wind to match his vision. He’s one of the nicest people in the world, so he was really nice about it, but I respect that so much, that he’s willing to take the time — and because he’s such a nice person, everyone on the crew wants to get it right, because there’s so much trust in him. Because of that, there’s no weak link.