Jimmi Simpson describes how, in the past, being cast “as the other weirdo” in supporting roles had resulted in him “coming at everything a little scruffy” on the red carpet. This year is altogether different for the 42-year-old actor. Nominated for an Emmy as guest actor in a drama series for his time-shifting performance in HBO’s Westworld, Simpson also has been cast opposite Ben Kingsley in the upcoming Epix series Our Lady, LTD. “My career had, in the first 12 years, an incline that was sooo slight,” he says in his self-effacing manner. But as the nominee heads into leading-man territory, other duties, including red carpet appearances, call. “You’re representing the show now — it’s part of your job as an actor,” he says. “I want to do all of my job at 110 percent and that includes often being the mouthpiece,” not to mention also a showcase, at least stylewise. And while Simpson is not a slouch in the wardrobe department, with a clean look revolving around “a couple suits, sport coats and some cardigan-y things,” his heightened visibility is an opportunity for a sartorial reinvention, courtesy of THR contributing editor Andrew Weitz, the talent agent turned fashion consultant who helps Hollywood executives get dressed. 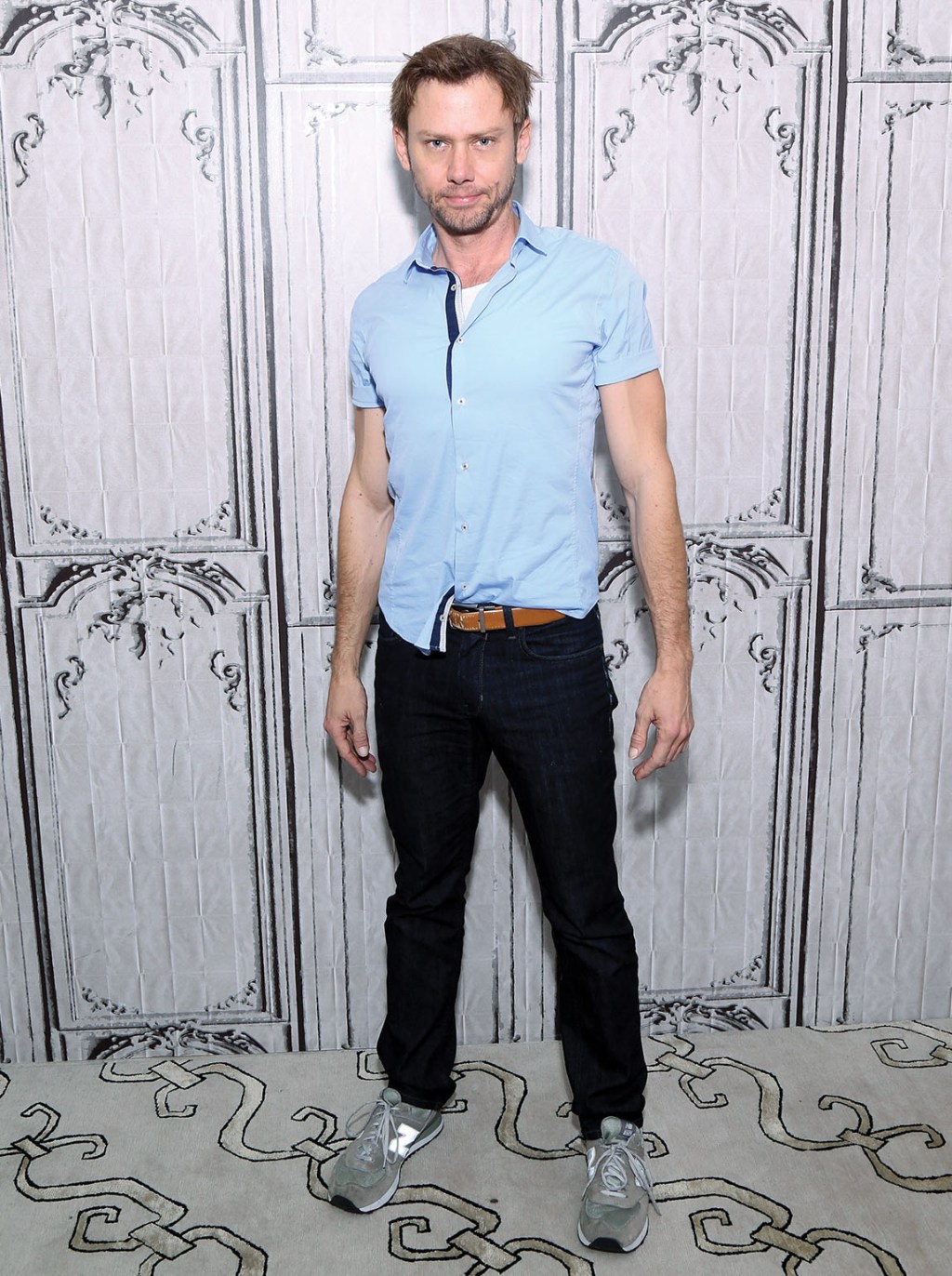 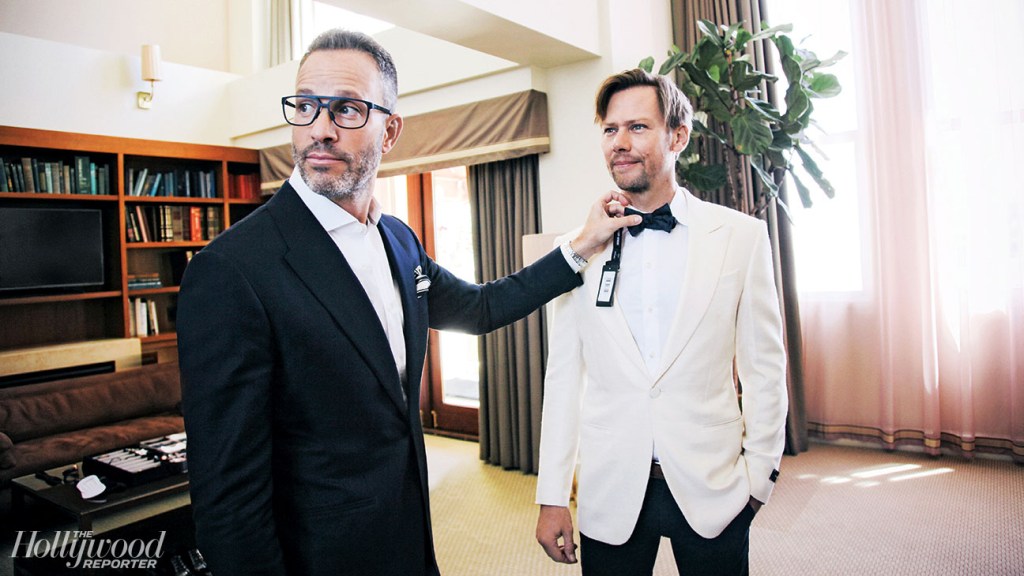 The actor had met The Weitz Effect founder before. Several years ago, when Weitz was still working in his day job as a WME agent, he took the then-journeyman actor on a memorable day of shopping. “He’d heard that I was newly single and that I had no sense of style and could use some help,” recalls Simpson, who still wears a blue John Varvatos suit acquired from that jaunt “because it was the one suit that fit me and looked good.” (When Weitz learns that Simpson still has some of the stuff from that sojourn, he tells him, “By now, maybe you should get rid of it.”)

This time around, Simpson wants to step outside of his comfort zone with an expert who is well aware of what that actually means. The actor does a deadpan impression of their repartee: “I would never reach for that, bro.” “Please, try it.” “I put it on: ‘Shit, I do love how I kind of rock this. Thank you for forcing me to try it.'” Weitz gives credit to Simpson for the actor’s evolution, sounding very much like the agent he used to be: “You’re taking a supporting actor, and now he’s nominated and on a international hit, a cult show, and in a pivotal role. Now he needs to go out and show the world that he’s a leading man, that people in the industry could look at him and say, ‘He is the guy.'” 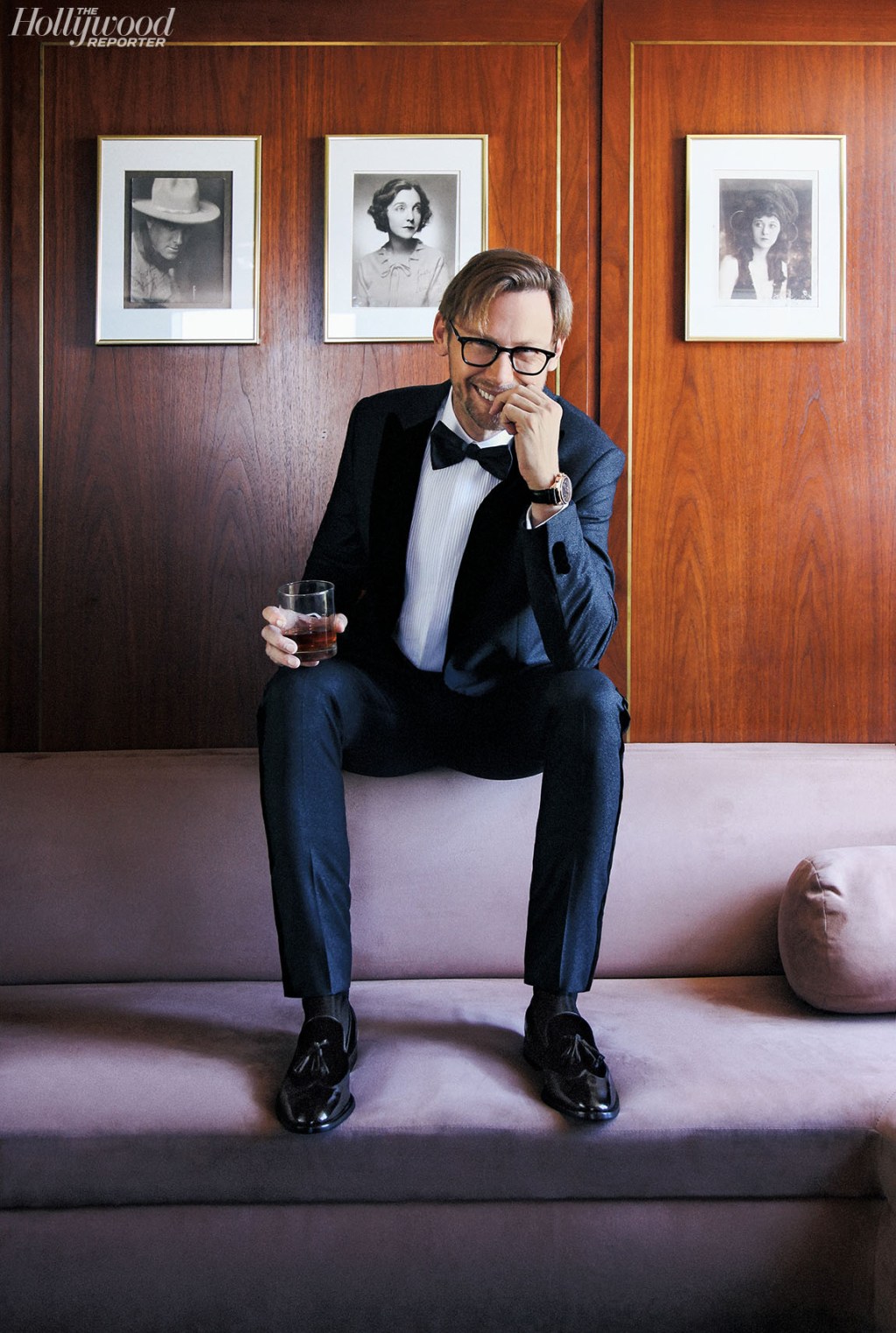 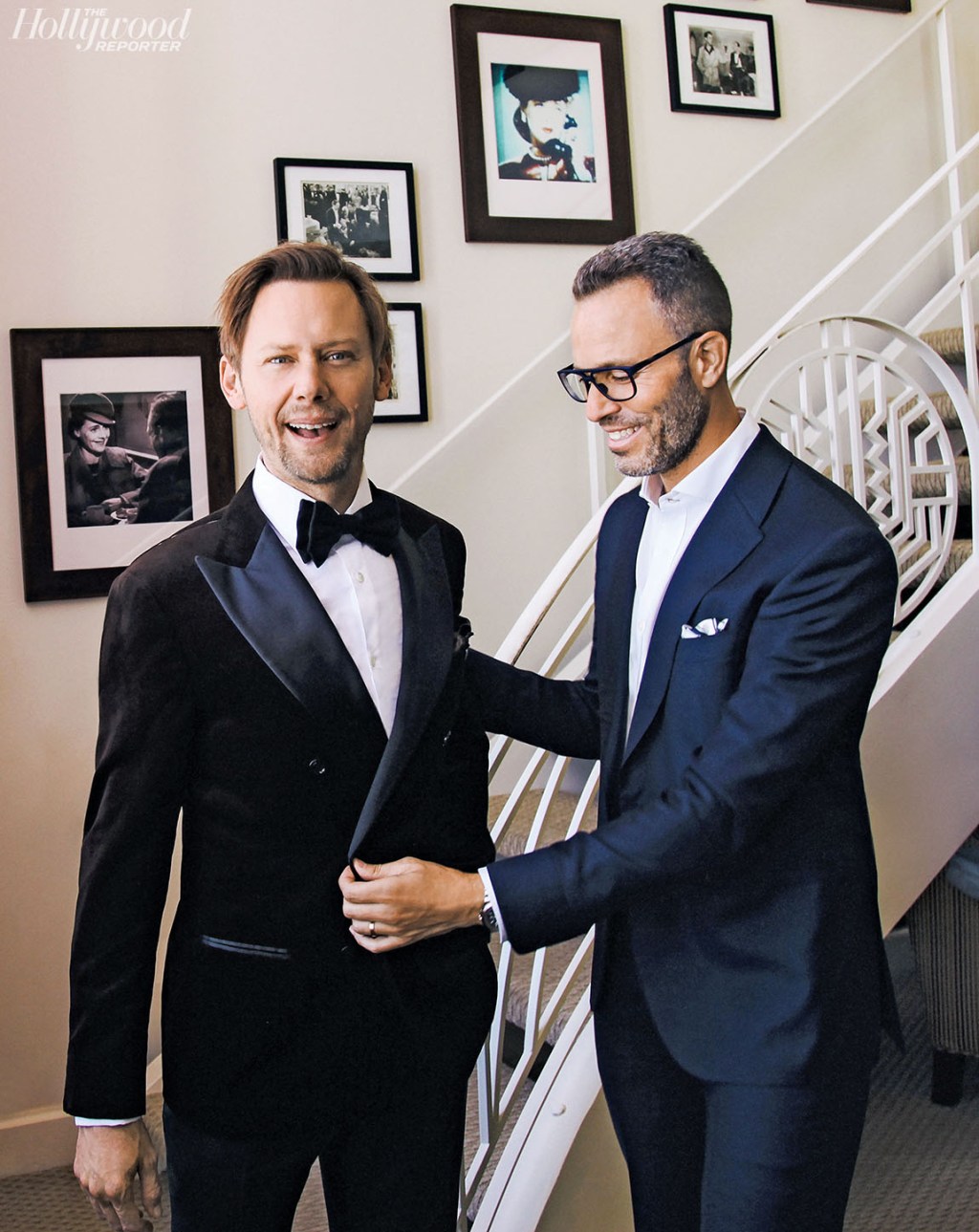 One thing that catches Simpson’s eye right away was a dinner jacket from Ermenegildo Zegna in the color of clotted cream (seen above). “It had this lovely fine texture, and the cream on top of a white tuxedo shirt was blisteringly appealing,” he says. “It wasn’t a James Bond thing or a maitre d’ thing.” Weitz then steers Simpson toward a rich brown velvet tuxedo from Italian luxury house Brunello Cucinelli. The double-breasted jacket with black satin peak lapels has swagger, and the deep truffle color is a sophisticated play on classic black. “I want to break it up and pair it with black tuxedo trousers that don’t have a satin stripe so it is both elegant and modern,” says Weitz, adding he would bring in “a shirt without studs, because the jacket is the showpiece, and a black satin bow tie to match the peak lapel, with a tapestry evening slipper in a pattern that picks up both tones. A brown silk pocket square with a subtle print adds a little extra life.” 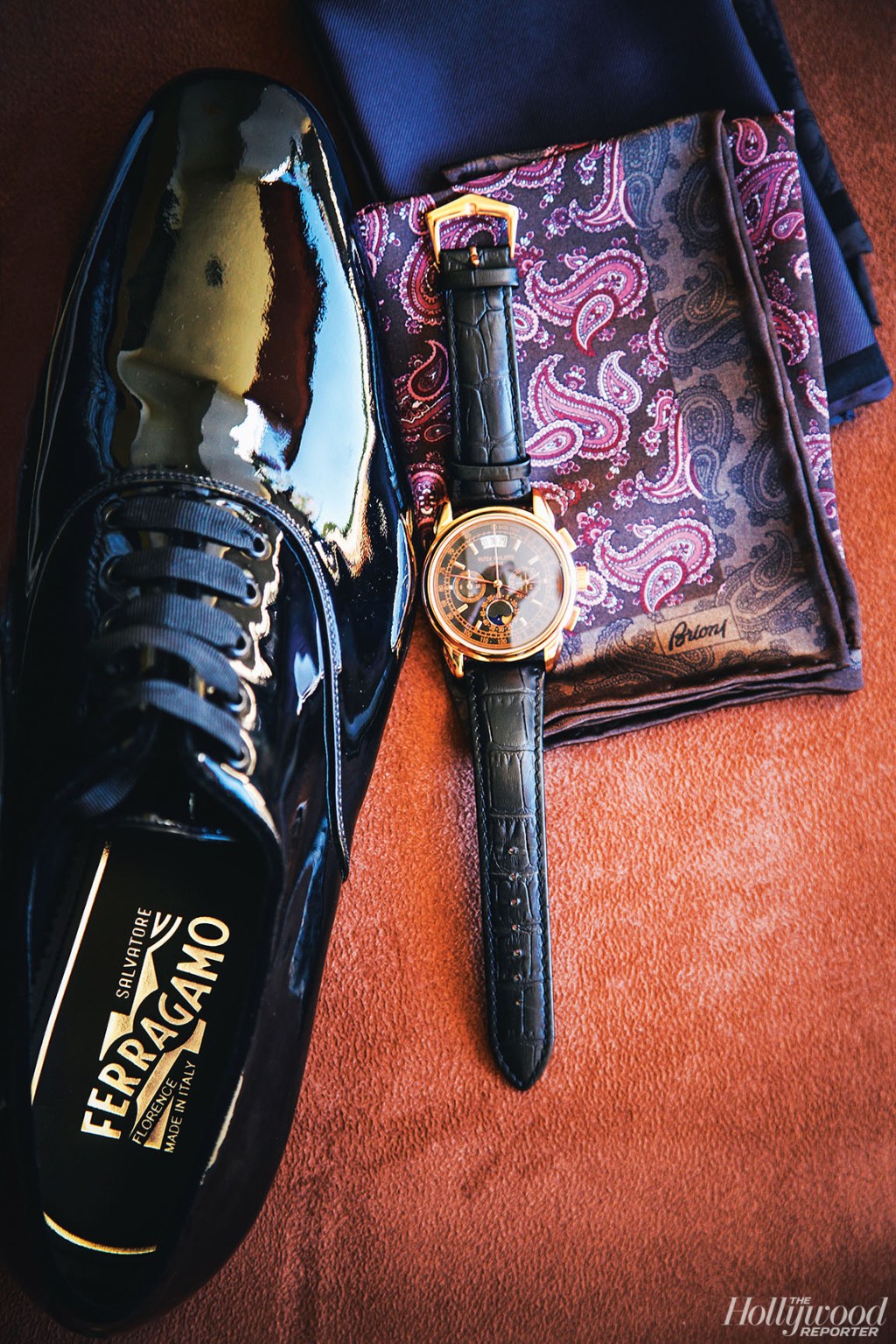 Simpson is on board: “The brown on black lands smooth like the Concorde. It makes me feel like Professor Plum but more svelte,” he jokes. Velvet tuxes have gone from being a novelty to a red carpet staple in the past few seasons, notes Bruce Pask, men’s fashion director at Bergdorf Goodman and Neiman Marcus, who adds that Hollywood stars can also wield it more casually: “You can wear the jacket with jeans and a T-shirt. It’s not just an occasion look anymore.”

After a brief brocade jacket try-on, next up for Simpson is a Brioni dinner jacket with a black shawl collar, in a black and navy silk jacquard (that’s when the pattern is woven into the fabric, not printed on top). “Many men don’t think black and navy go together, but with formal wear, it’s a sophisticated choice,” says Weitz. He adds sleek Salvatore Ferragamo trousers with a satin waistband, a modern update on the cummerbund. Classic patent lace-ups keep lines clean. “When we were choosing the tux shirts, I grabbed a wing-tip collar, which I usually don’t like because they’re very bar mitzvah,” says the style consultant. “The whole thing popped with black and silver shirt studs, so we skipped the bow tie. You’re wearing a wing tip, but it’s not 1980 and you’re doing it this way.”

Simpson had to agree. “It looks like a guy who was so comfortable with himself, it’s like, ‘Fuck it,’ and it shows,” he says. “That’s a large part of my energy, not in a dismissive way, but I’m acutely aware that nothing really matters. Some people are nihilists! Let’s not sweat the stuff and all be a little freer.” Losing the tie is a trend that was recently set by both Chadwick Boseman, who donned a tieless black Givenchy to this year’s Oscars, and Ryan Gosling, who sported a white Gucci jacket with matching white shirt sans tie at the Venice Film Festival. (“It’s a clean and modern update to the classic tux,” notes Gosling’s stylist Samantha McMillen.) 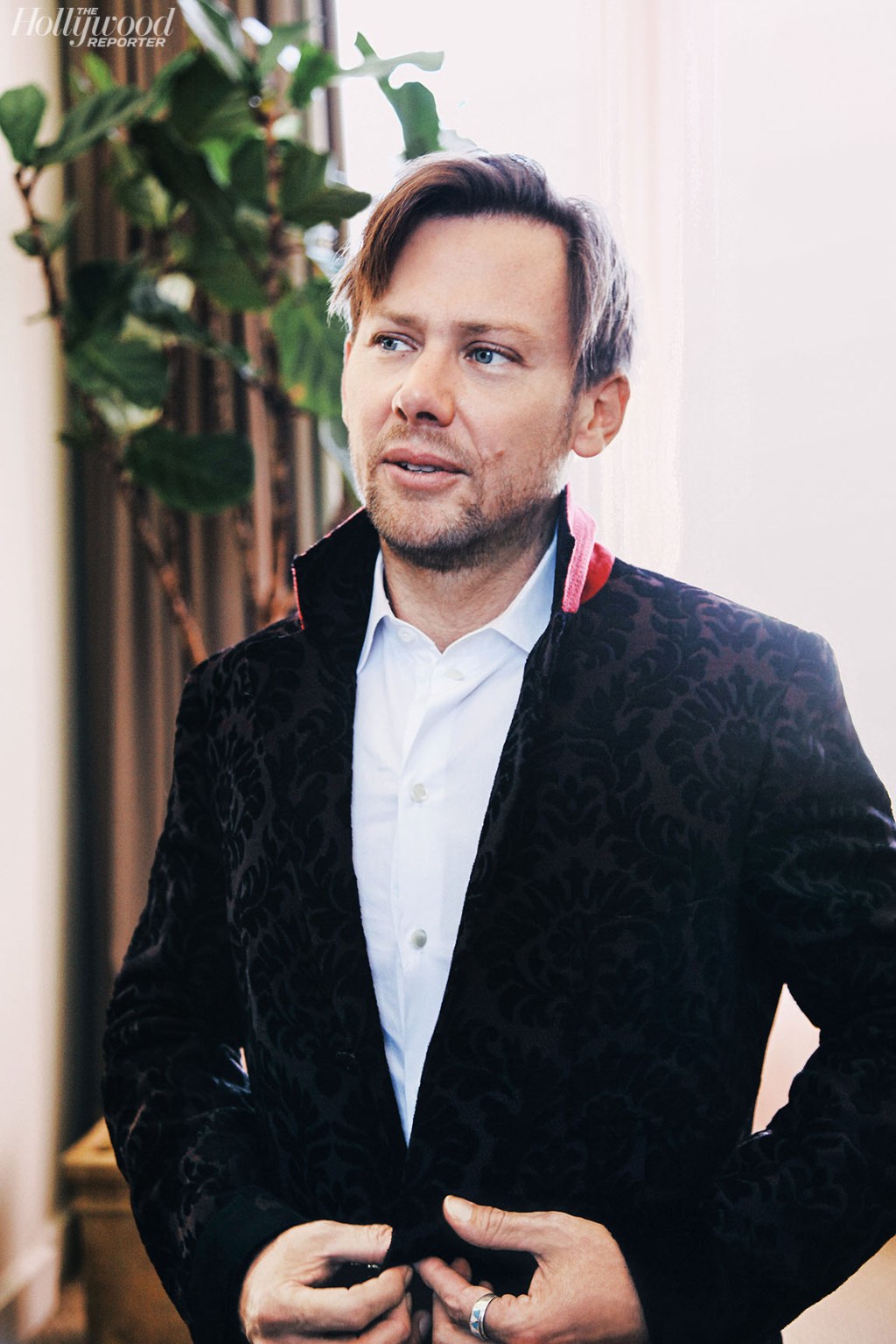 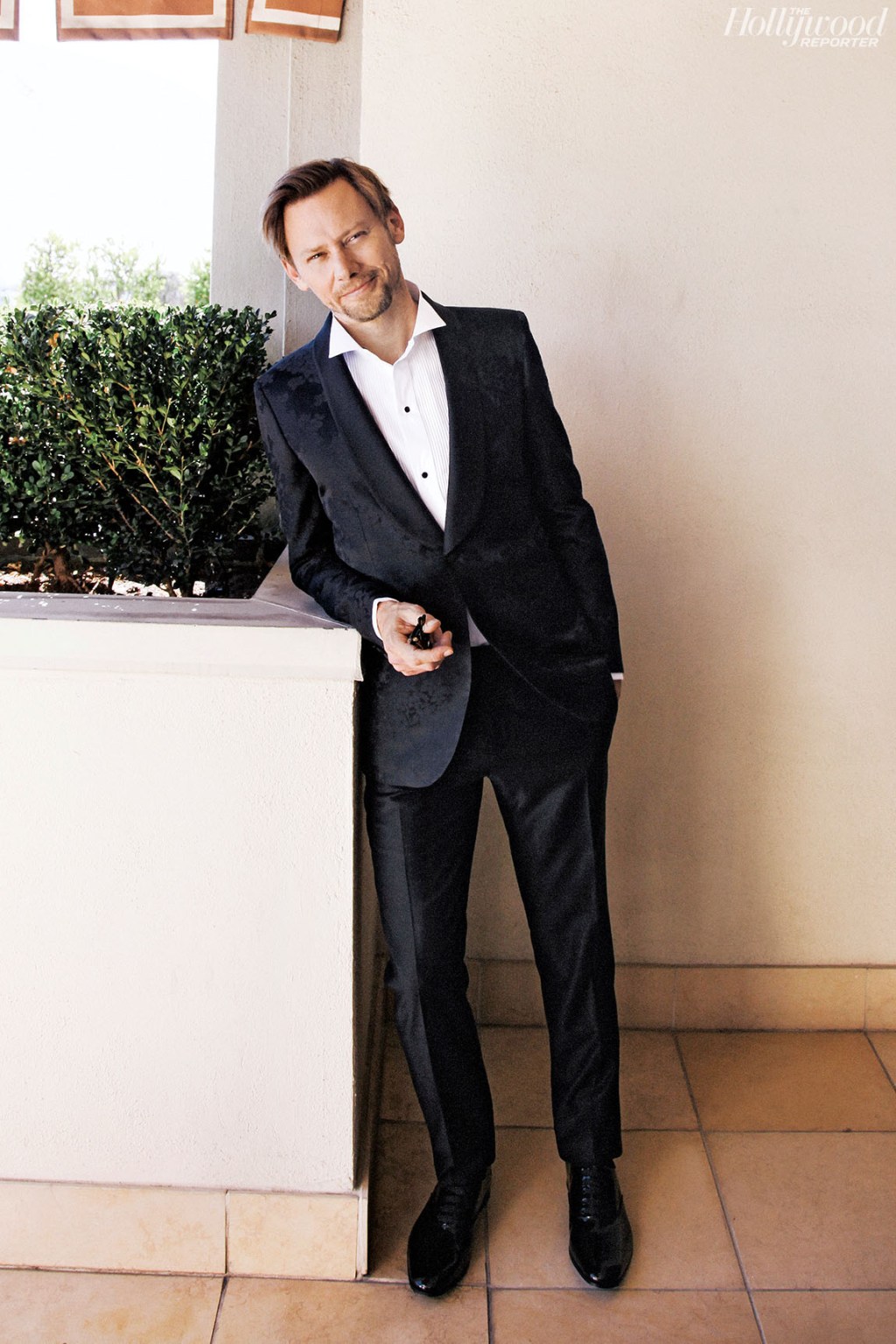 Somewhere in the mix, for a more elevated take, Weitz offers up the option of a Giorgio Armani tuxedo in a subtly textured gray flannel, with a clever twist on a current trend — just the lapels and trouser side stripes are black velvet, picked up on by a pair of velvet and leather tassel slip-ons from Tod’s. “This season, I’ve seen more velvet than in the past, but it’s rare to see something with both velvet lapels and a stripe, and it looks so rich,” says Weitz, admiringly. “It’s conservative but edgy at the same time.” He chooses for Simpson a contrasting bow tie in matte-black silk grosgrain, instead of the expected velvet. “I am the first person to match the fabric of my bow tie to the lapel, but the grosgrain looks stunning. We went with a Brioni covered-placket shirt since the tuxedo itself was the showstopper.”

This is the winning look for Simpson. “It struck me as graphic and softly bold,” he says. “It’s me making an effort, saying how much I care about this special event.” Weitz concurs: “We’re taking his vibe, his personal brand of, ‘I want to be stylish but I don’t need to go overboard,’ and making sure he gets noticed without going too far out of the box — but noticed in exactly the right way.” 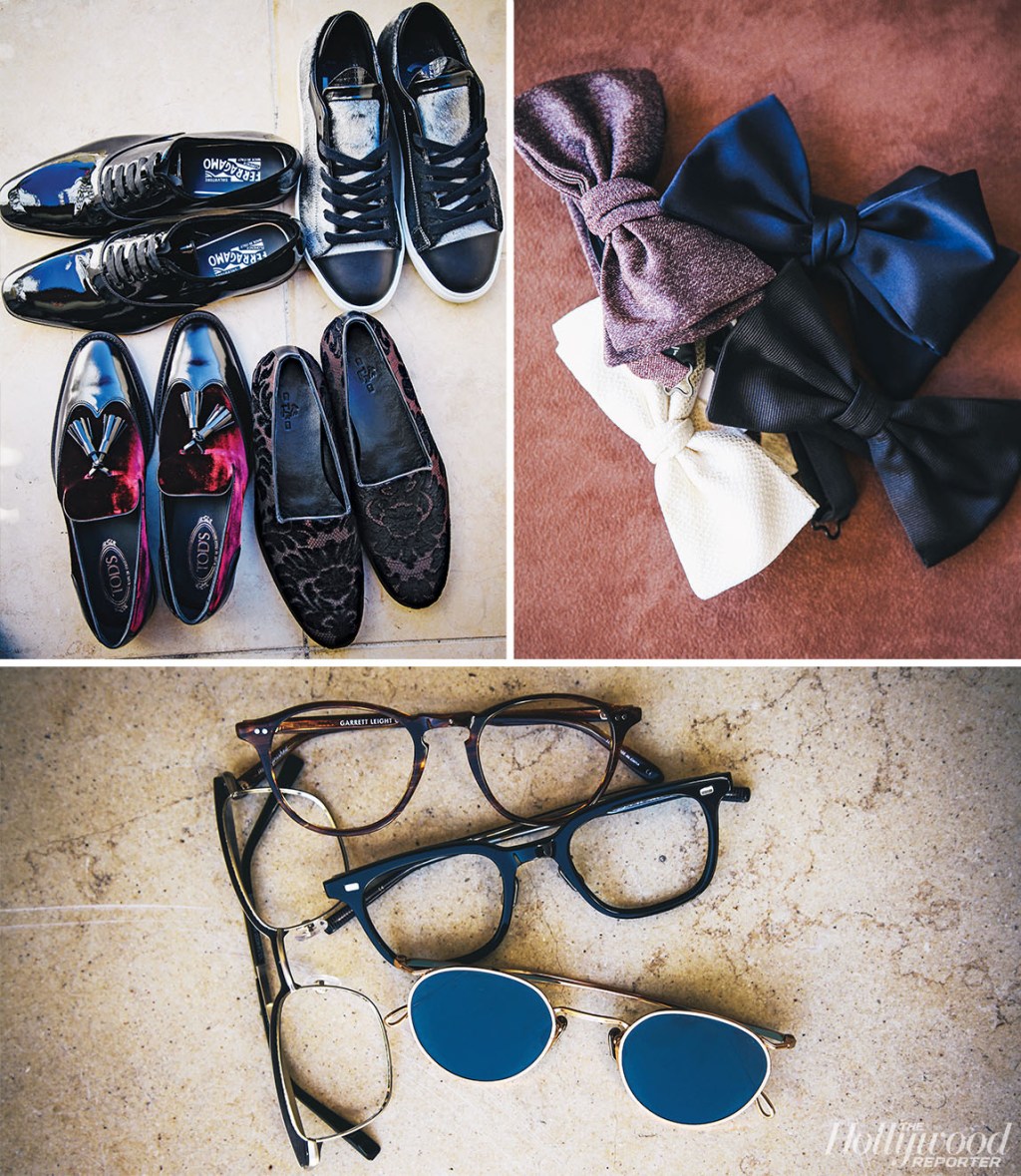