The 72nd Primetime Emmy Awards honored the year’s best in television on Sunday night. Hosted by Jimmy Kimmel and held semi-virtually for the first time in the show’s history, the ceremony was filled with a number of standout and stand-up moments. Some of the most memorable ones included a trash can on fire, a Friends reunion and a Canadian comedy sweep.

Powerful speeches and essential workers were also among the most unforgettable highlights of the 2020 telecast. Read on for a recap of the Emmy Awards’ most memorable moments.

Jennifer Aniston made a number of appearances during the 2020 Emmys, but easily the most memorable was toward the end of the show when Aniston appeared on the stage’s big screen in what looked to be an office. Shortly after, she was joined by Courteney Cox and Lisa Kudrow, who joked with Kimmel that of course they were with Aniston, they’ve lived together “since 1994.” Jason Bateman then appeared behind all three women, with Aniston jokingly admitting that he only lives in their house “until he goes off to college.”

“I will say I appreciate the support. That’s so nice that you guys gathered around the monitor to watch the show,” Kimmel barely got out before all three women hurriedly dashed out of the video to go eat dinner.

In the lead-up to announcing the nominees for best limited series or movie, Black-ish star and presenter Anthony Anderson took the stage and acknowledged that the shift towards more Black Emmy nominees was “great.” He then declared the Emmys would have been All-Star weekend and Wakanda all rolled into one and “hot sauce in your purse Black” had the pandemic not shut down the in-person ceremony.

“This was supposed to be the Blackest Emmys ever,” Anderson said. “Y’all wouldn’t have been able to handle how Black it was going big, but because of COVID. We can’t even get in the damn building.”

Anderson detailed how speeches would have featured quotes from Black icons like Maya Angelou, Langston Hughes and Cardi B and Megan Thee Stallion’s “WAP.” After lamenting standing alone in a sterilized green room, Anderson confessed that it “this wasn’t what it should have been.”

“But you know what, I’m still rooting for everybody Black because Black stories, Black performances and Black Lives Matter,” Anderson said before getting Kimmel to chant “Black Lives Matter” on stage. “And because Black lives matter, Black people will stay at home tonight to be safe, which is fine because guess what? Y’all don’t know how to light us anyway,” Anderson concluded.

This year the Emmy Awards went virtual due to health concerns around the COVID-19 pandemic. Jokingly titling the night the “Pandemmys,” Kimmel helped buffer the lack of an audience with a few jokes focused on the award show’s safety precautions.

The opening featured old awards show audience footage over a laugh track, an in-person appearance by Ozark star and nominee Jason Bateman amid a crowd of cardboard celebrity cutouts and an Emmy statue holding hand sanitizer. But things got somewhat testy after presenter Jennifer Aniston arrived on stage to help announce the best actress in a comedy series winner.

After clips of the nominees played, Kimmel sprayed Lysol on the envelope containing the winner as Aniston looked on, remarking “That is a little extreme, Jimmy.” Kimmel then dropped the envelope into a trashcan and lit it on fire in an effort to “burn all the germs off,” before Aniston was left to make several attempts at putting out the fire on stage.

The entire cast was joined together at a socially distanced Emmys viewing party in Toronto, where they doled out plenty of hugs and kisses as they accepted their awards from hazmat-clad trophy presenters. “I want to thank our amazing production team, terrific writers and exceptionally talented cast who I loved working with for six years,” Eugene Levy said.

Each of the winners acknowledged the family at the center of the show’s creative team, as well as the family that had grown out of their time filming together. Special and gratuitous thanks often went to both comedy and acting icons Eugene Levy and Catherine O’Hara.

While accepting the best comedy series Emmy, Dan Levy celebrated the ideals at the heart of the show, which dominated the comedy categories. “Our show at its core is about the transformational effects of love and acceptance. That is something that we need more of now than we’ve ever needed before,” Levy said.

Without a host of celebrities at their fingertips due to social distancing precautions, the 2020 Emmys opted to give the virtual stage to a different kind of star this year. In keeping with their general pandemic theme, several categories featured essential workers announcing this year’s nominees. A public school U.S. history teacher and a UPS driver were among the handful of regular Americans that were featured in pre-recorded videos during the 2020 ceremony. All shared messages about how the pandemic had impacted their work, and the importance of human connection during a time of quarantine.

“We’re not just mas — I mean, celebrating ourselves tonight,” Kimmel announced towards the start of the show. “We’re also shining a light on doctors, nurses, teachers, farmers, truckers, people who do so much to keep our country going. Tonight we invited some of them, our essential workers, to hand out awards to those who are much less essential than they are. 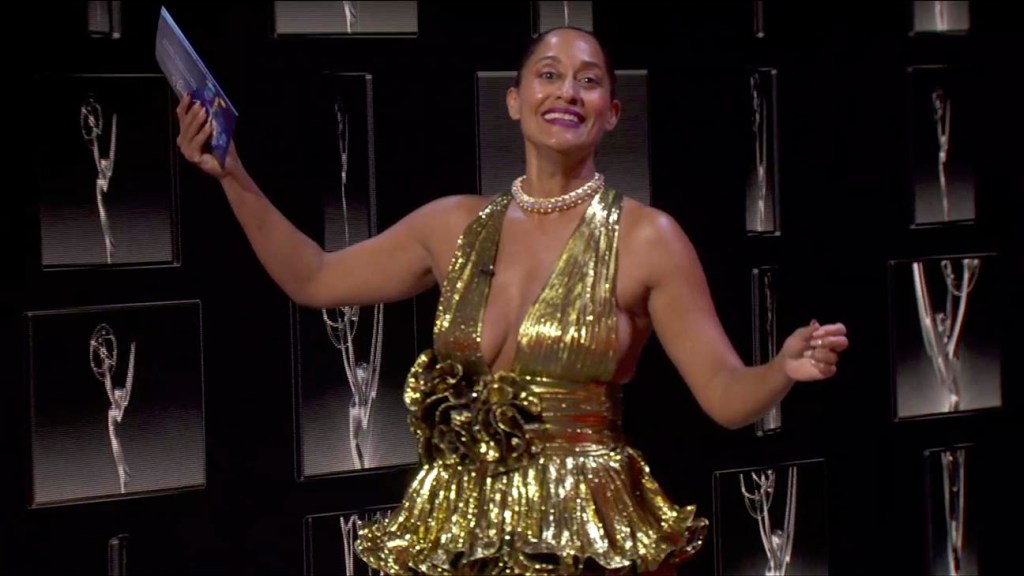 The presidential election was a hot topic during the 2020 Emmys, with calls to vote making their way into several presenter and acceptance speeches, and a few of the night’s stand-alone comedic bits. Black-ish actress and nominee Tracee Ellis Ross kicked off the trend with a presenting gag, declaring that she had only “agreed to dress for the occasion and come somewhere other than my home, and I have done that.”

“I am here to present for outstanding writer for a comedy series,” Ross said when she first entered the stage. “And thank you, stay safe, make a plan for voting, wear a mask and good night.”

As part of a bit about the state of the postal service and mail-in voting, actor Anthony Carrigan walked onto the stage with an accent, dressed in a postal uniform with a name tag that said “Derek.” He then stated that the old mailman who was intended to appear had had “an accident.” After telling Kimmel that he’s from the sunshine state “where the old people die and the young people wear the tank top,” Derek shared with the Emmys host that he had only started right before the 2016 election and sketchily requested to get Kimmel’s absentee ballot.

Winners Levy and Regina King made more serious pleas for viewers to vote, with Levy apologizing for making his speech political while King encouraged voters to have a plan and participate in local elections.

Stars Having Been Anxiously Drinking and Pruning While In Quarantine

Nominees have been holed up in their homes for months. Since no one was able to walk a red carpet to talk about how they’ve kept themselves occupied, the Emmys asked what they’ve been up doing with their quarantine and got a handful of comedic results.

In a short video segment, celebrities like Chris Harrison, Mindy Kaling, Will Arnett, Kenan Thompson, Bob Newhart, animated characters Rick and Morty and David Spade dressed as Joe Exotic offered up glimpses at their preferred quarantine activities. Thompson could be seen riding an exercise bike, while Harrison sat behind a desk covered in roses, seemingly pruning them before asking the camera, “Who do you think does this?” Good Doctor star Freddie Highmore related that while masks have made it easier for some celebrities to go outside, due to his character constantly wearing them, it’s made it him more recognizable.

Other stars’ revealed slightly more upsetting quarantine routes, like Tatiana Maslany, who admitted to making wine out of her toilet alongside Margo Martindale whose gardening mostly consisted of sipping on wine out in her garden. Bob Odenkirk also revealed he had been spending a lot of time outside, specifically “living inside my garden shed to avoid my family.” Kaling shared that embroidery was helping her deal with anxiety before showing an embroidered piece that read, “Help, I’m going insane.”

Emmys Analysis: HBO Holds Off Netflix in a Year Unlike Any Other