Color, custom and carats: Those were the three jewelry trends that ruled the Emmys red carpet on Sunday night.

Boldly hued gemstones were seen on a variety of jewelry by designers such as Anabela Chan, whose Papillon earrings in lilac amethyst and smoky quartz were seen on Anna Chlumsky; and Harry Winston, which provided a pair of 1968 vintage sapphire and diamond hoops totaling 30.68 carats, set in platinum, for Gwyneth Paltrow.

Custom pieces likewise dominated Emmys jewelry, and not exclusively for the women. For Sterling K. Brown, David Yurman crafted a pair of custom-engraved cufflinks out of forged carbon for a one-of-a-kind look with his Brioni tuxedo.

On a night featuring no shortage of sparkle, here are five standout looks:

The Game of Thrones nominee for lead actress in a drama series was among the night’s most anticipated arrivals, and Emilia Clarke didn’t disappoint in her plunging navy gown by Valentino. But it was her David Webb earrings that caught the eye, crafted of cabochon opal drops, fluted sapphires, brilliant-cut diamonds and green enamel, all set in 18-karat yellow gold and platinum. Clarke wore a matching ring also by David Webb, which enjoyed a healthy amount of red-carpet placements Sunday night, also helping to accessorize Natasha Lyonne, Angela Bassett, Amy Poehler and Jameela Jamil. 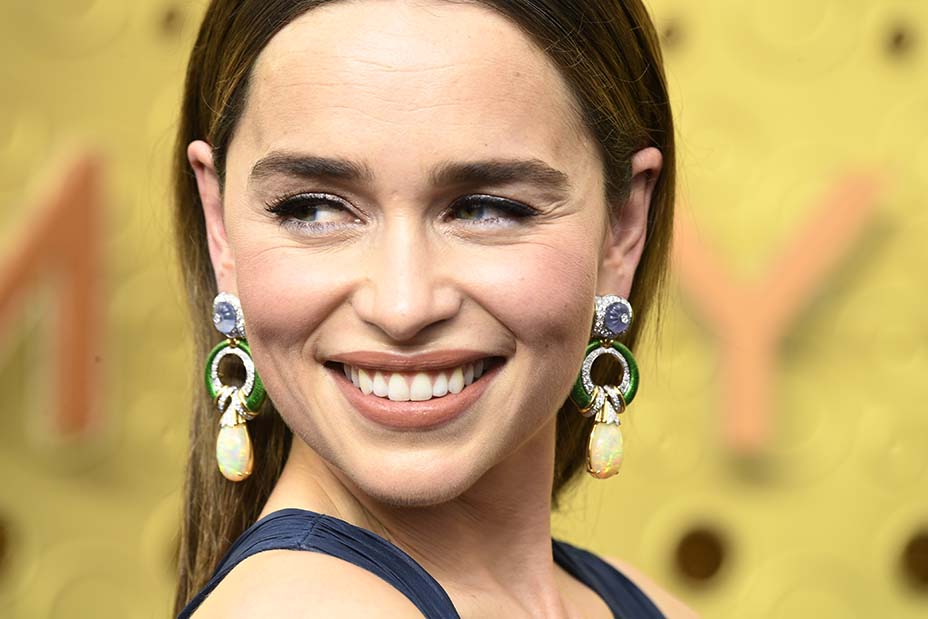 Another nominee for Game of Thrones, for supporting actress in a drama series, Sophie Turner gave a subtle nod to the HBO show’s vibe in her Emmys look. Turner’s head-to-toe look by Louis Vuitton included a necklace and ring from the house’s latest high-jewelry collection, titled “Riders of the Knight,” which takes its cue from medieval female warriors. As its name implies, Turner’s “L’Armure” necklace is inspired by armor and is crafted of baguette-cut diamonds set in 18-karat white gold. 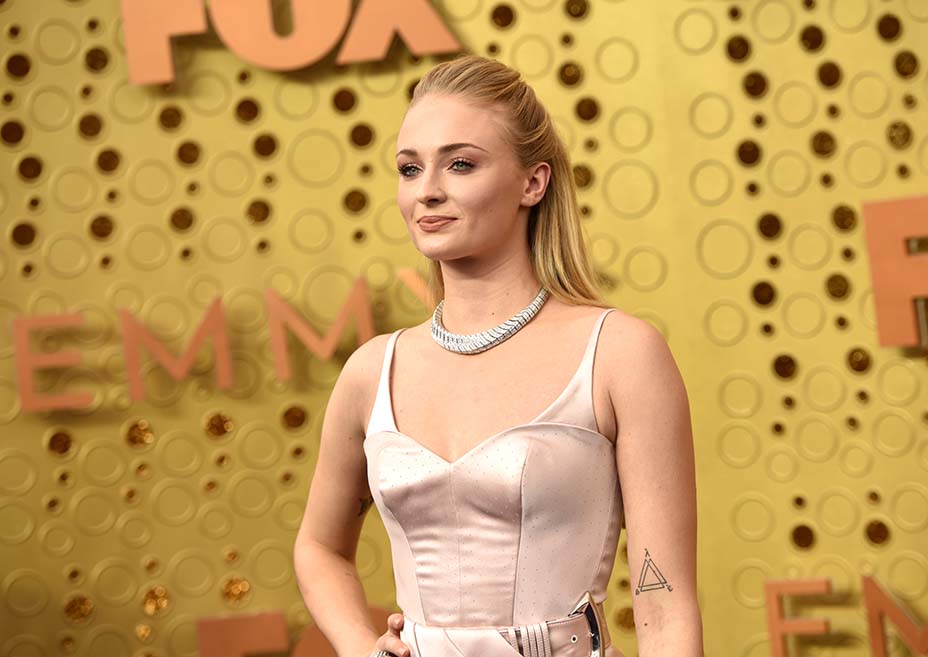 She’s an 11-time Primetime Emmy winner, so why shouldn’t Julia Louis-Dreyfus dress the part, outfitting herself like a golden goddess on Sunday night? With her custom gold embroidered lamé gown by Oscar de la Renta, the actress wore a pair of one-of-a-kind earrings by Los Angeles-based jeweler Irene Neuwirth, crafted of 10 carats of opals and full-cut diamonds totaling 4.94 carats, all set in 18-karat yellow and white gold. A ring featuring green beryl and diamond pavé also was a one-of-a-kind piece by Neuwirth. 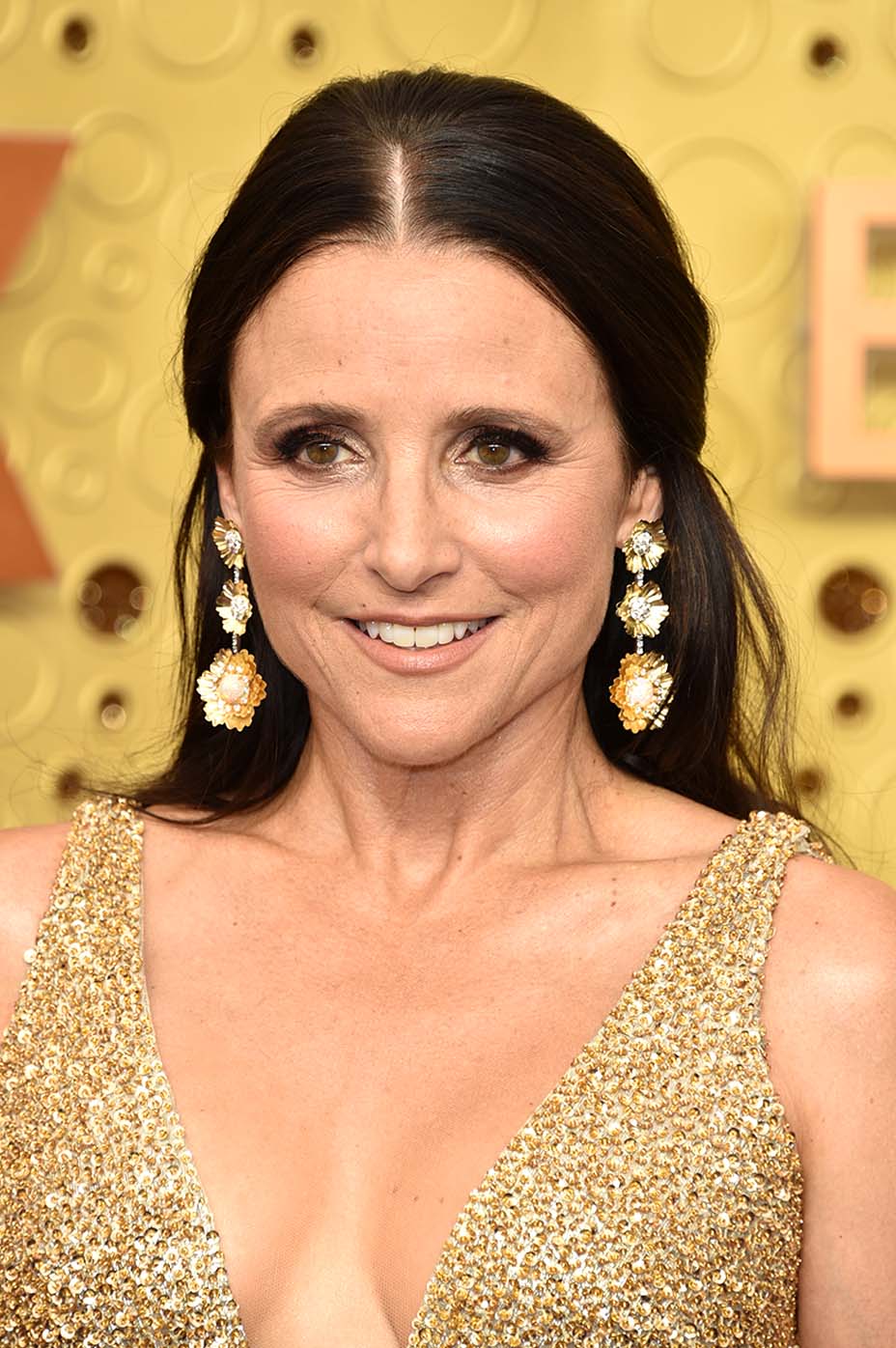 A nominee for outstanding lead actress for How to Get Away With Murder, Viola Davis paired her graphic black and white gown by Alberta Ferretti with a multitude of diamonds by Forevermark (and its Forevermark by Rahaminov line), including a choker and two necklaces totaling 78.72 carats of diamonds set in 18-karat white gold. Princess-cut diamond studs totaling 8.21 carats and an oval diamond ring totaling 10.32 carats, set in platinum, finished the look. 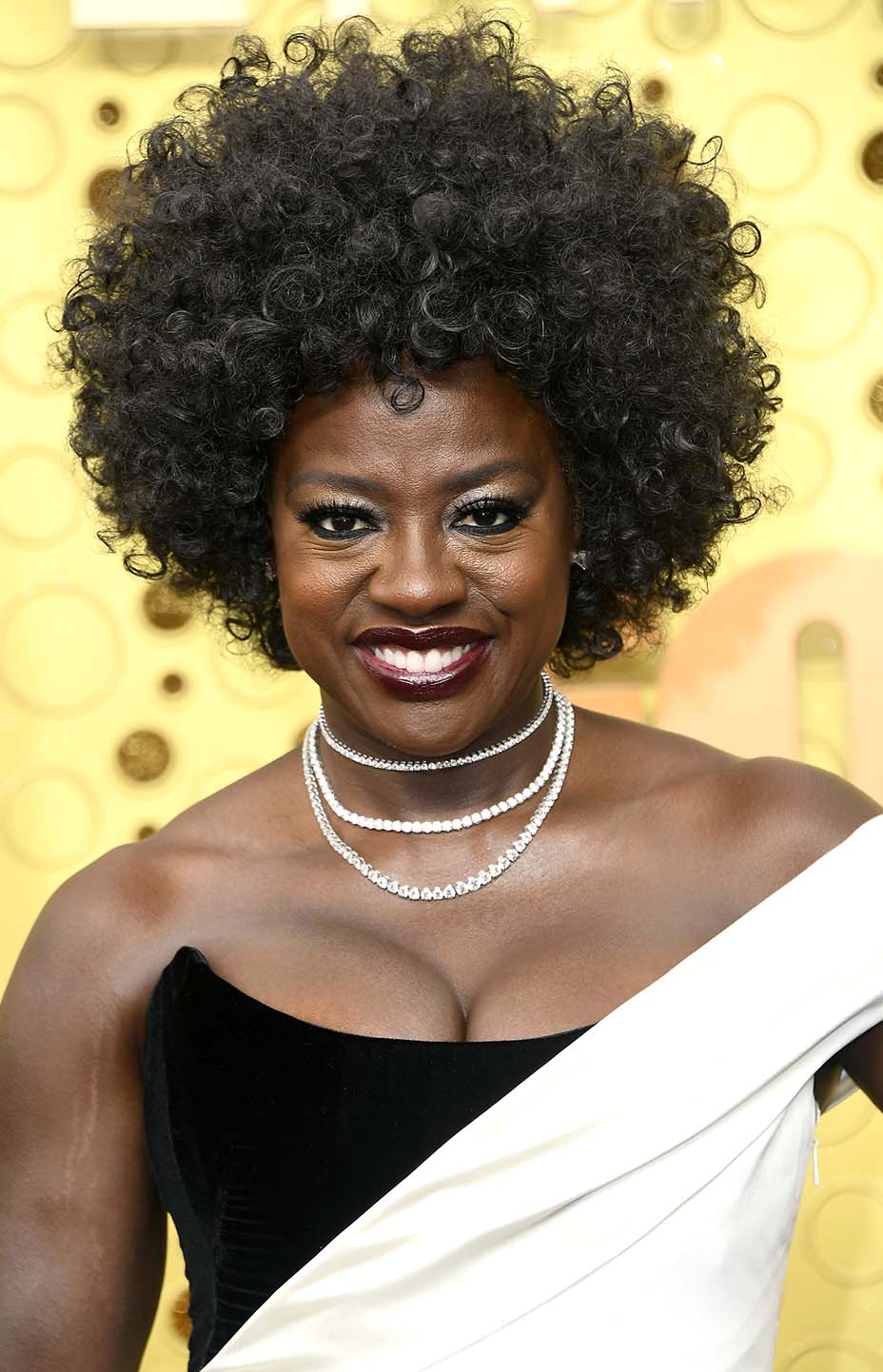 Brilliant color dominated the statement earrings seen on the Emmys red carpet, but none more so than the deep crimson of Lorraine Schwartz’s Burmese cabochon ruby and diamond earrings worn by Catherine Zeta-Jones, who paired the shoulder-brushing jewels with a rose-hued gown with an illusion detail from Georges Hobeika’s fall-winter 2019 haute couture collection. 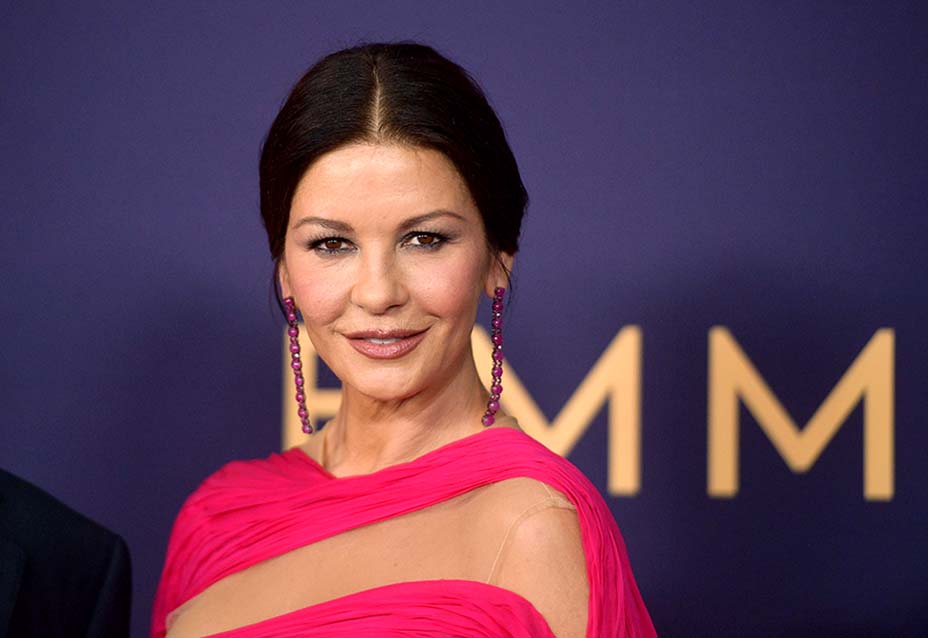