Alexa Demie, who stars as Maddy Perez on HBO’s Euphoria, took a starring turn on the boundary-pushing drama’s fifth episode on Sunday as her character navigates an abusive relationship.

At the end of last week’s episode, Maddy’s boyfriend, Nate (played by Jacob Elordi), violently choked her after she confronted him about photos on his phone. This week, Maddy attempts to disguise the abuse with makeup, but school officials see the bruising and bring Nate to the police. She repeatedly denies he hurt her, so much so that the police have to put her in handcuffs and cut off her sweater in order to see the injuries. After Nate is suspended, Maddy goes into a downward spiral trying to contact him until they eventually meet up in secret in a hotel at the end of the episode.

Demie, who previously starred in Jonah Hill’s Mid90s, talked to The Hollywood Reporter about playing an abused girlfriend, filming that intense choking scene and offering lessons to young people.

We learn about Maddy’s childhood in this episode. How did her upbringing explain how she ended up in this situation with Nate?

It’s pretty clear that her home life is dark and dull. Her parents don’t have the best relationship, they don’t even really communicate. She doesn’t see any love there, so she believes what she has with Nate is far better than what she has at home. I think oftentimes growing up in a dysfunctional family, you can easily end up in a dysfunctional relationship because it seems almost normal to you, or even better than you grew up seeing. So I think it definitely had an effect on her and explains why she’s not left this relationship.

She also has an interesting backstory with being a child pageant queen and being forced to stop after one of the men involved in pageants is arrested for sexual assault. How did that impact how you thought about her?

I think it really helped me, because since she’s been a little girl she’s always had confidence and she’s always been in love with the makeup and hair and wardrobe. Then everything she loved and everything that she dreamed of doing and thought she was going to do forever was taken away from her by some random man she never even met. I think that set into her wanting to have control over men and be the one in charge.

Maddy says she’s sick to her stomach because she knows the abuse wouldn’t stop her from loving him — why do you think that is?

I think because she really is in love with Nate, despite how dysfunctional and toxic their relationship is. A lot of times, especially in high school, your emotions are at an all-time high, and you’re so in love with the person that you’re with and you think you’re going to end up with them. A lot of times with girls, we also think we can fix them or help them or change them. I think she is in love with him, and she has a little bit of hope inside of her that he will be everything she wants him to be. She’s also just really young and thinks that Nate is her world. Later on things might change, but now she just wants to defend him and be with him.

She defends Nate multiple times, to the police and her parents and her teachers. Why does she protect him?

She doesn’t want him to go to jail — he’s her boyfriend. Despite what you see on camera, I know we show a lot of the toxic parts of the relationship, but there’s also been the good parts of the relationship. You also feel like when your parents or any adult is trying to tell you what to do, you want to rebel against that, and she definitely wants to rebel and just be with Nate. 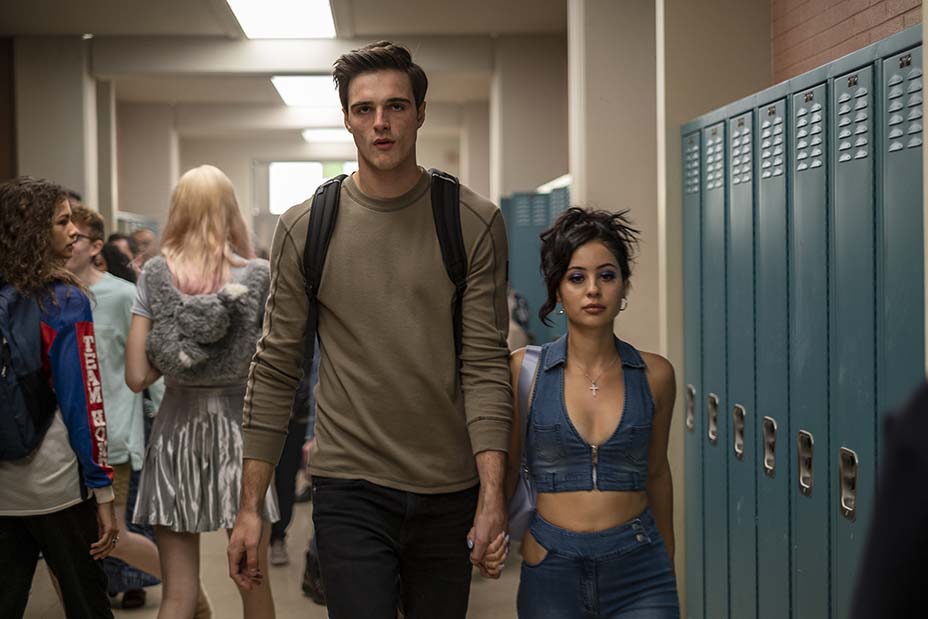 How was it for you and Jacob to shoot that intense choking scene?

It was really intense. We had a stunt coordinator on set to help, but when you’re in the moment anything can happen. I’m happy that all of my scenes that have been the most uncomfortable have been with Jacob, because he’s a really sweet person and really professional and easy to work with, so that made it better. But those scenes are never fun. You can easily get hurt, and oftentimes you want to give it your all as a young actor and you want to make it as real as possible, so you allow certain things because you want it to be good and believable.

How does Maddy feel returning to school after Nate has been suspended and everyone knows about what happened?

We see her unraveling after the suspension — why has not talking to Nate affected her so much?

I think even though he’s the one who hurt her, it’s a very dark, vulnerable time for her, and it feels like everyone is against her. She’s seeking comfort in the relationship that she knows, and it’s weird, because as much as it’s a violent relationship, she also feels a certain safeness in being with him. She also wants to know what’s going on with him.

You have some intense sex scenes on the show. How were those to shoot?

Sam [Levinson, Euphoria creator] made it really comfortable for all of us. We always made sure it was a closed set; there were as few people in the room as possible, we had all of the monitors turned off. To me, those scenes are really uncomfortable, and I think they were as uncomfortable to Jacob, so I think both of us being uncomfortable in it made it a little easier. The scene with the montage of all the guys, not my favorite thing to do, but the story calls for it so we did it.

Maddy’s storyline focuses a lot on abusive and toxic relationships. What do you want young people to take away from your character?

As much as you think this person loves you and as much as you think you love them, any time it starts to get violent —whether that’s physically, mentally — you need to make that choice to leave, because it can get worse. I think that’s the great thing about Euphoria, we don’t glorify these instances to show all of the consequences, so I think throughout the story you’ll see more and more consequences. It won’t look good to be in this type of relationship.

A lot has been made about the sex and drugs aspect of the show, but what do you hope Euphoria says about high school today?

I’m happy that we’ve made a show that isn’t a cliche or doesn’t just sit at the surface. I think now that we’re seeing all of these kids and what they’re going through, I hope it develops more empathy and more compassion for adults and teens and children. Everyone’s going through something, you never know what it is, and I think being a little bit nicer to each other is a good start.