Barbie Ferreira, who stars in HBO’s bold new drama Euphoria as Kat Hernandez, was the breakout star of Sunday night’s third episode, in which her character juggles sex, insecurity and the dark corners of the Internet.

Events of the Week: 'Euphoria,' 'The Offer' and More

Ferreira, who has previously appeared on HBO’s Divorce, spoke to The Hollywood Reporter about that webcam scene, her own experiences with fat-shaming and the escape of living online.

First, that webcam scene. What was it like to film that?

Funny enough, we shot the pilot and then the first week that we were back, I did that scene. I was really excited to do that scene, it’s so funny and so up my alley of this dark humor but also this very vulnerable, real interaction that I know many people have gone through. The added layer that it’s a micropenis, it was honestly such a fun scene to shoot because my reactions were so genuine. He was actually there and had an earpiece in and I could hear him and see the Skype video. The reaction is there, the literal scene is my actual reaction to seeing that. I couldn’t contain myself sometimes. I don’t get grossed out really quickly, so I had to channel having this be the first really crazy moment of seeing something so extreme and not understanding or computing what was going on. It was a blast to do, I know it’s funny to watch, but it was also pretty funny to shoot.

How did you prepare for that scene?

I remember the first week I came in and in the pilot I was overthinking so much because it was my first time doing anything like this, so I went in not even trying to visualize what it would look like because I wanted that genuine “Oh no! No he didn’t!” reaction to it. So I saw a peek of the room, it was in this little room upstairs with the webcam, and I was downstairs in my room and I peeked in and there was a giant jar of jelly. I don’t even know if you can see it, but the amount of detail in that room — I wish they would pan out and show you, there was a giant jar of jam that was like half-eaten and these gross little details to it. And everyone there is so cool and respectful and it was such a good experience, even when things like a prosthetic micropenis came into play. It just felt like any other day on set too, but that one day will always be extra good.

In addition to the webcam moments, your character also has a few sex scenes. You had an intimacy coordinator on set. How did that play into shooting those?

The intimacy coordinator was in almost every decision of people touching each other or showing any sort of skin, so everything was incredibly deliberate and choreographed. Most of my sex scenes I’m fully clothed, or even if I am showing something, it’s all just so talked through. You talk to her and then you talk to her again right before it. I signed off to do a lot more nudity; we just realized I didn’t even need it. As much as people are watching and being like, “Oh my god, there’s nudity everywhere,” it’s all so deliberate and specific and conveys a message. Sam [Levinson, Euphoria creator] always has reasoning for everything, and you can see it when you’re reading it and watching it.

Why was Kat drawn to this online sex space, and how did she use it to become more empowered?

I think the reality of Kat is that everyone around her is having sex or is thought of as desirable, and she just doesn’t feel that. She feels that she’s lacking in sexual experience, and she is not trying to be a prude or a virgin, and it’s almost like this frustration that no one wants to explore her sexually. That scene where Daniel breaks up with little Kat, it made me cry, actually, when I first started watching it. I know it’s a more lighthearted background for a character than Euphoria is used to, but for those who understand it and get it, it’s so sad to know to know that this girl’s whole life — and how I was also until I had to break it — was feeling invisible or even an aspect of disgust, because you’re like, “I don’t think people would find me attractive.” And to see a world in which all of these anonymous people that don’t need to be nice to you see you as a sexual person who’s hot, taking that power back and being the object of desire she’s never been — especially in this seedy place that’s also inherently sexy and taboo — it just all plays into her need to be anonymous online and get validation from it. I think the porno comments are the first time she’s ever seen people see her in that light that she wants to be in so desperately because she wants to be like everyone else, she wants to explore her sexuality. 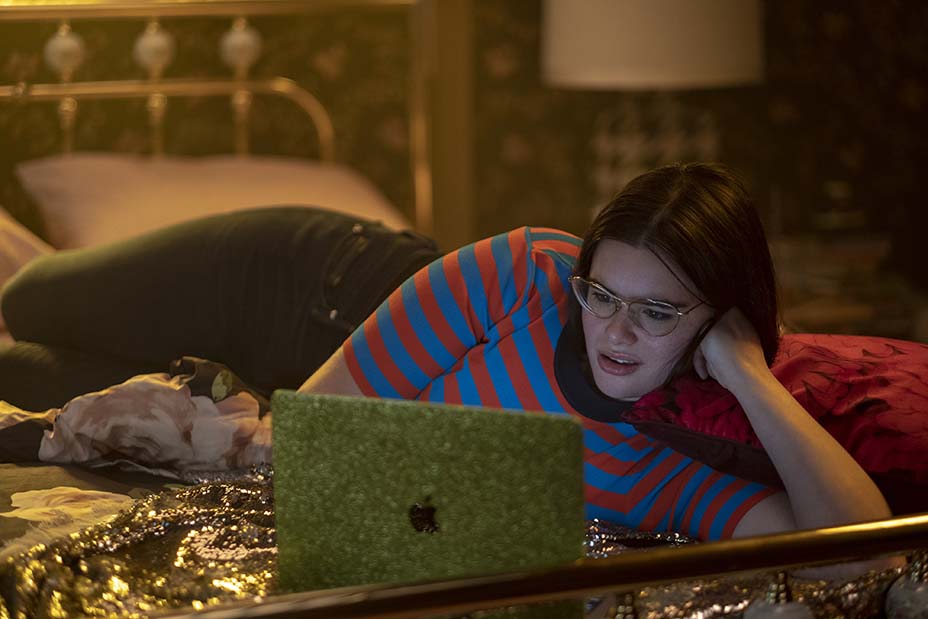 The episode also deals a lot with bullying and being shamed for her weight — how do you think the show tackled that uniquely, and why was that important for you?

Bullying because of weight happens in such small ways, in big ways as well, but Kat really does feel isolated, and she resorts to being an online erotic fiction writer. She wants an outlet to support that, and when [in the show] I walk down the hallway and the kids behind me are making sound effects, it was written in the script, but that was direct from my life. I would be followed home from school and guys would be like making sound effects as I took my steps. So the reality of it is there’s a lot of different ways for people to make you feel bad. I also think it’s funny because the kid behind me making those sound effects is also chubby. People really have a self hatred of being fat or being known as fat, and especially in an environment where everyone thinks of you as a negative thing, it makes you feel really horrible about yourself, and your self-hatred is so deep. I didn’t feel like one day she was going to be confident, it’s this armor that she’s putting on to go into her cam girl self, which is the only persona that has gotten her any sort of attention in that way where she feels like she’s not different than everyone else and she’s actually a hot girl. That armor of being a cam girl, it’s a way of pushing back those insecurities just so you can put up that front, like, “Don’t f—with me, I’m wearing leather.” But inside it’s still there, and you can see it in every move that she makes.

Kat’s story deals a lot with her online life versus her real life. How has one impacted the other?

The anonymous aspect of it is really interesting to me, because there’s a level of vulnerability when you show who you really are on the Internet. I went on the Internet at a young age, and I couldn’t deal with being vulnerable and showing those aspects of myself. I think having an outlet where she’s validated and she’s talented and people really admire her and don’t even know who she is, it’s like she’s keeping it at arm’s length because she’s scared that if people see who she really is they won’t like her anymore and will realize she’s just another fat girl. That’s an extension of herself that she doesn’t want to mix with real life; she wants to keep it separate, because she’s scared if she mixes it, it will all go downhill. She kind of starts exploring bringing her online persona into her real life, but her new online persona, and she finds power in it, and she’s powerless at school.

Part of Kat’s storyline is also that she’s the creator of Larry Stylinson, the hugely popular fan fiction about One Direction’s Harry Styles and Louis Tomlinson. What was the idea behind that?

When I first read the script, that was the first thing that popped out to me, because I can relate to that as a 22-year-old woman who lived through the One Direction age. It’s such a reality for so many people, and so many children and teens that are fans just have this escapist world. You completely give yourself to this persona of a person you don’t even know, or five guys, and imaging the way they interact the escaping from your own reality. It’s really interesting to me because I was definitely a part of that, where I wanted to escape my own life and focus on others because it was easier and felt more meaningful.

Beyond all of the sex and drugs, what do you want people to take away from this show?

I think the people watching it are really understanding how the characters are so layered and how they can relate to them, but also understand that it’s a drama and not necessarily everyone’s story, but it is a story that people can relate to. We were getting press about nudity and whatever, and it made me nervous because we put our heart and soul into it, and I’m so happy that as soon as it came out, the amount of thinking, the amount of conversations, the amount of people really relating to it. People are not listening to young people, clearly, because of the way they were writing about the show, because young people have resonated with it so much. I’m completely confident they’ll be able to continue to, because every episode peels back a layer of young adulthood. Sam really wrote something that people can feel and understand and talk about, and that’s been evident in the way that people are having conversations about it, even about the nudity.