[The following story contains spoilers for the sixth episode of the first season of HBO’s Euphoria.]

Continuing Euphoria’s trend of breakout episodes and deep dives into one character’s past each week, Sunday night’s episode six was Algee Smith’s moment in the spotlight. Smith stars on HBO’s boundary-pushing drama as Chris McKay, the lone college student in the group who is struggling with his identity as a former football star.

The episode explores McKay’s complex relationship with his strict father, who is always pushing him to be the best on the field, and the fears about his future when he realizes he may not be good enough to make it to the NFL. His relationship with girlfriend Cassie (played by Sydney Sweeney) is also a big part of his storyline, as he keeps her at arm’s length and gets embarrassed over how she dresses and acts. In a particularly brutal scene this week, McKay is getting intimate with Cassie when multiple masked men break down his door and assault him, seemingly as part of a hazing ritual. He breaks down in the bathroom after the incident, but publicly acts like everything is fine, even as he and Cassie get increasingly distant. The episode ends with Cassie realizing she may be pregnant.

Smith, who recently appeared in The Hate U Give, spoke to The Hollywood Reporter about that hazing scene, McKay’s emotional issues and working with an intimacy coordinator on set.

We learn a lot about McKay’s relationship with his father in this episode — how did that intense upbringing affect who he is now?

We see from the beginning of the episode, as soon as we come in, how it is between him and his father. Even when he’s practicing really hard and he’s like, “OK, now you’re ready to practice for real with the team,” you see immediately the hard work inside of him. I think his father’s opinion really just affects his everyday thought process, and when he feels he’s not making it in college, that really hurts him to break it to his father. That relationship is very critical to him and his confidence.

Throughout this episode, McKay is panicking about his future and doubting he will be able to go pro. Beyond football, what’s the deeper fear there?

I think it’s really rooted in football, to be honest; that’s where he finds his confidence. The deeper we go, we start talking about the father again because that’s just the dynamic right now; it’s football and it’s also trying to please his father with football. I think outside of that, it may be Cassie and everything he has to do with that, but I think the main thing he’s focused on is, “I’m not making it in my dream, and my father is counting on me making it and I’ve got to break it to him.”

With him and Cassie, we see a lot of ups and downs in their relationship, with a constant theme of him caring what his friends think of her and how she dresses and acts. Why does he care so much what others think of her?

He knows her situation; she’s just out there, she’s a very out-there girl. He knows that, so when he’s dating her he knows he’s going to get shit and his friends are going to talk shit because they know the type of girl she is as well, so that’s where his insecurity comes in. He really likes this girl, but at the same time he knows her history, and that bothers him. 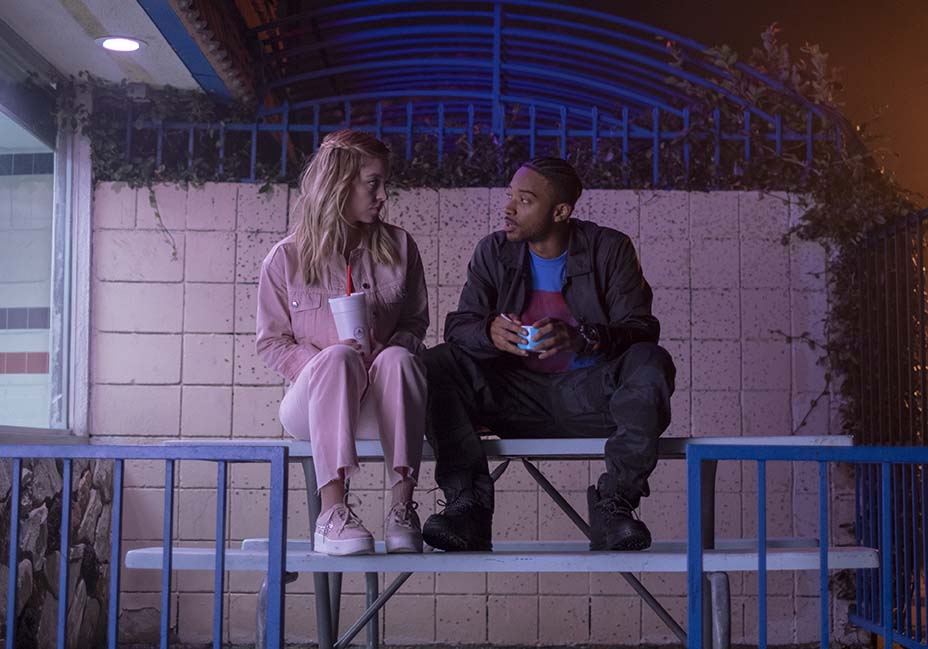 McKay has an intense hazing scene in this episode, and there’s been some confusion online about what exactly is happening to him. What’s going on in that scene?

In that scene, he was getting hazed by the frat or whatever, and his drunk frat brothers came in and were fake humping him. It looks really graphic in the scene the way they edited and chopped it up, which is scary as hell, but they’re play-humping and whatever and calling him “McGay.” The way they made it look was very scary; I was surprised by the editing.

It was really cold in there because I was naked for real. Outside of being very cold, it was very dark. The way Pippa [Bianco, the episode’s helmer] directed it, it was a private set and when they came in the room it was very intense. It lasted for a long time and was somber on set.

After that, we see him alone in the bathroom and breaking down in the mirror. Where is McKay emotionally in that scene?

At the beginning of the episode, we see his father tell him to take his emotions and bottle them in, and when you get to the line [of scrimage], that’s when you let it snap. He tells him to not let it show, that the measure of a man is defined by how much he can take; that’s one of the lines his father gives him. So when he’s in the mirror, he’s going back to that moment and hearing what his father said; he’s taking all of that that just happened and he’s bottling it up. You can see that once he bottles it up, he comes back with a calmer, or numb, state of mind.

Why doesn’t he open up to Cassie in that moment?

I don’t think he wants her to know his full emotional state. I think he’s comfortable knowing that she likes him and maybe will grow to love him, but he doesn’t want to let her in and be open yet. I think he just loves the idea of having her, not being fully vulnerable with her. That’s a lot to share, whatever he’s going through, and he doesn’t know how to talk about it because he’s never talked about it or communicated because he just bottles everything up. All the times he does want to talk to her, I think he just doesn’t know how.

Do you think he has any suspicion Cassie is cheating on him with these other guys?

I definitely think he has suspicions, even though he doesn’t have anything to prove it. He knows what kind of girl she is, and he’s trying to just blind it right now with “love.”

Your character is the only one in college, with the rest still in high school. How do you think that impacts the story?

It impacts the story more than the way I play it. Even though he’s in college, he’s fresh out of high school, so his mindset hasn’t changed a lot. It’s more so responsibility. For the story, I think it’s very important because you’re not just relating to high school anymore, you’re relating to college. And even though the show does feel very college, you’re on both sides now so you can go to both markets.

We had a pregnancy scare tease at the end of this episode. What can you say about what’s next for Cassie and McKay?

They do really well with the teases, that’s all I can say. They’ll continue to be tested, and we’ll figure out if he really likes her for the long run. We’ll see those feelings come out and what they have to go through.

You have some pretty intense sex scenes on the show. The cast had an intimacy coordinator on set. How did that help you with shooting those?

That was very beneficial. That was the first time I’ve had an intimacy coordinator on the set. Before we even got on set, she would come to our trailers and talk to us about everything we had to do and made sure we felt very comfortable. When we got on set, she wouldn’t keep letting them do takes for no reason. When we did about three takes she was like, “OK, my actors have done enough, they’re good now.” She really kept an eye on us and kept us protected, not in the sense that anyone else didn’t want to protect us, but it was her job to overprotect and make sure that we were super comfortable being in the position we were in.

Beyond the sex and drugs aspect of the show, what do you want people to take away from Euphoria?

I hope it continues to be relatable. I think that’s the thing right now — if it’s bullcrap people are quick to call it, and if it’s relatable, as you can see, they’re quick to latch on and continue to watch it. So more than anything my hope is for it to be super relatable, for people to have empathy and understand and be able to come out and talk about a lot of the things that are going on on the show. I’ve seen a lot of conversations on social media, on Twitter especially, about people just talking about these things that they deal with that are relatable on the show, and you’d be surprised, it’s a lot of people. It’s really good it’s opening up the dialogue, and I think that’s the important thing.