With political forces — Brexiters in England, far-right nationalists in Italy and France — apparently striving to tear Europe apart, it’s heartening to see how European television companies, at least, are pulling closer together.

Faced with a growing threat from global streaming platforms for audience eyeballs — Netflix and Amazon Prime already are established in Europe; Disney+, Apple TV+ and WarnerMedia’s service will launch by 2020 — Europe’s old-media giants are joining forces to try to keep the barbarians from the gates.

On May 29, Italian TV group Mediaset paid $368 million for slightly less than 10 percent of German commercial broadcaster ProSiebenSat.1, a first step in creating a pan-European television company. On June 7, Mediaset said it would set up a new holding firm, MediaForEurope, in the Netherlands to bundle its TV assets across the continent. On June 3, French giant Vivendi placed a $2.37 billion bond to finance its European expansion — including a $1.1 billion deal, announced May 29, by its pay TV division CanalPlus to buy Luxembourg-based M7 Group, a company with about 3 million pay TV customers.

Even within European countries, once-bitter corporate rivals are cooperating. ProSiebenSat.1 and RTL, its main German competitor, have become frenemies, launching a joint venture June 3 that will pool the networks’ advertising efforts online, helping them better match ads to audiences. Several collaborative SVOD services among former competitors already are in the works, including France’s Salto (backed by commercial networks TF1, France Television and M6), BritBox (ITV and the BBC) and German-based Joyn (a joint venture between ProSiebenSat.1 and Discovery, which owns pan-European sports network Eurosport).

“Everyone is looking to get bigger, to get economies of scale and go international,” says Guy Bisson of London-based Ampere Analysis. Adds François Godard, a researcher for Enders Analysis: “European broadcasters don’t have the resources to compete alone against global players like Netflix. If they don’t stick together, Netflix will have them for dinner, one by one.”

Godard compares the state of the European TV market with a slow-moving car crash. The traditional television business — free and pay TV — still dwarfs the streaming market in Europe but, as one analyst notes, “there’s no growth there.” TV revenue in Europe has been broadly flat over the past five years and the big national networks have seen their audiences erode. Meanwhile, SVOD figures have skyrocketed. With Disney+ and Apple TV+ soon to be in the mix, London-based Digital TV Research is forecasting 100 million SVOD subscribers in Western Europe by the end of 2021 and for total SVOD revenue in the region to jump to $12.47 billion within five years.

None of Europe’s big national networks is looking to take Netflix or Disney+ head-on. The humiliating end to CanalPlus’ CanalPlay — after Netflix entered the French market in 2015, the homegrown SVOD service saw its subscriber figures collapse from 800,000 to just 200,000, forcing CanalPlay to shut down last summer — has local broadcasters taking a more modest tone. When CanalPlus CEO Maxime Saada announced the company’s new Canal+Series service in April, he made clear the cheaper SVOD offering would be “complementary” to Netflix, not a competitor.

Noting the strong growth in online video advertising in Europe — the segment has surged 187 percent to $3.8 billion across Europe’s five top territories in the past four years, with only a quarter of that going to traditional broadcasters — Godard says what European broadcasters really need “is not a European Netflix but a European Hulu; that is, a joint, ad-supported streaming platform.”

The big question is whether European networks can further unite in their common cause. “There is demand for local content in Europe, and that is where national broadcasters traditionally have excelled,” says Ampere’s Bisson. “But scaling that across borders, across different languages, different cultures, is a tall order. They need to get it right, and they need to get it right quickly.” 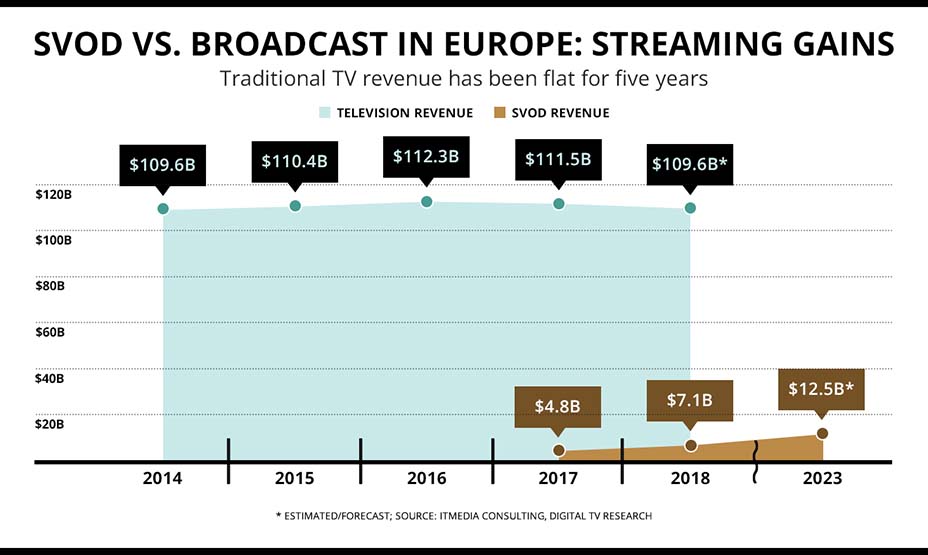