When Ewan McGregor met Halston executive producer and director Daniel Minahan to discuss starring in the Netflix series, he was not familiar with the 1970s fashion revolutionary.

“To find out that he was so massively famous in his time,” says McGregor, “and I had never heard of him — that didn’t make much sense to me.”

McGregor was quickly brought up to speed, however, by Minahan, who had been trying to turn Halston’s life into a project for nearly 20 years. A dedicated student of Halston, Minahan put together a presentation featuring images of the designer at every stage of his rise and fall.

Once put into production, no expense was spared to re-create the luxe world that Halston inhabited — from his Olympic Tower design headquarters to his ultra-modern Manhattan townhome to the fabled disco Studio 54, where Halston danced the night away with his entourage, including best friend Liza Minnelli.

“It’s interesting,” says Minahan. “Since I first started pitching this project, I’ve seen a Halston revival come and go, maybe twice. He had a huge influence on the fashion world.”

In these exclusive and never-before-seen images from the set, Minahan walks through every painstaking detail taken to ensure that the world of Halston felt just right. (Read more from The Hollywood Reporter’s cover story here.)

Pictured above: Halston (Ewan McGregor) at his desk in the Olympic Tower. “It was important to us that we dressed every one of Halston’s workspaces to be functional, with the correct sketches, newspapers, swatches and tools — right down to the yellow-lined pads and flair pens Halston actually used.”

"I Have the Career I Started Out Wanting": Ewan McGregor on Reviving Obi-Wan and "Going to the Extremes" to Play Halston 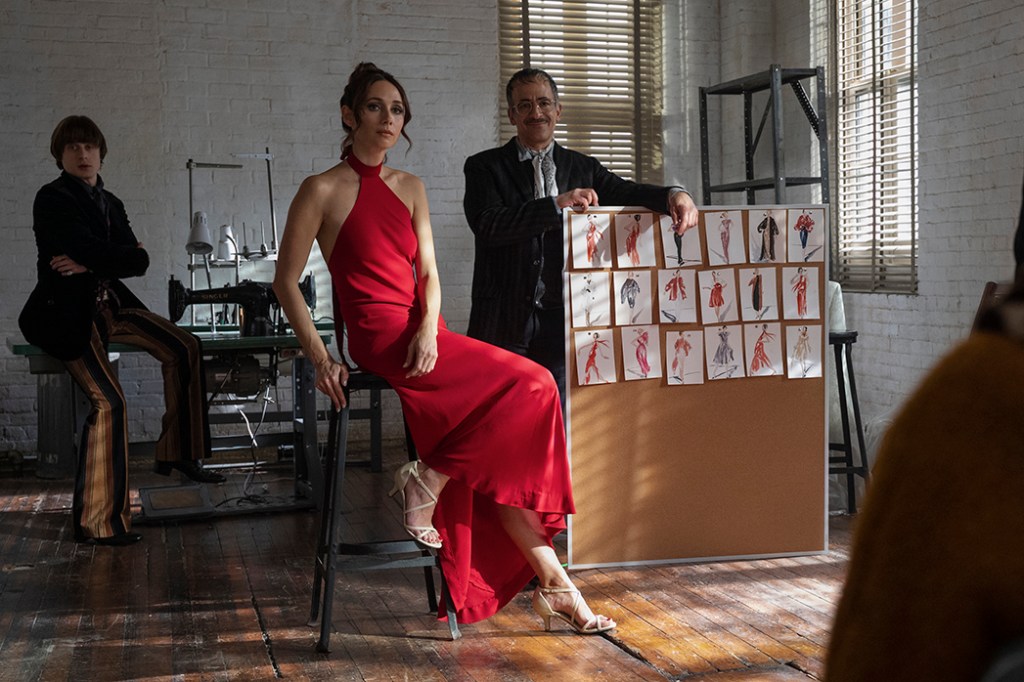 “Here’s Halston’s design team looking skeptical while pitching to a potential investor. Design partner Joel Schumacher (Rory Culkin), Elsa Peretti and Joe Eula. People are surprised to learn that Joel Schumacher, better known for his work as director, started out in fashion and worked with Halston in his first business.”

“Krysta Rodriguez in the role of the one and only Liza Minnelli. She really sings and dances all of these numbers with incredible skill and passion and gives 110 percent — just like Liza. Here she’s performing ‘Bonjour Paris. The reactions of the audience were real; she brought everyone to their feet.” 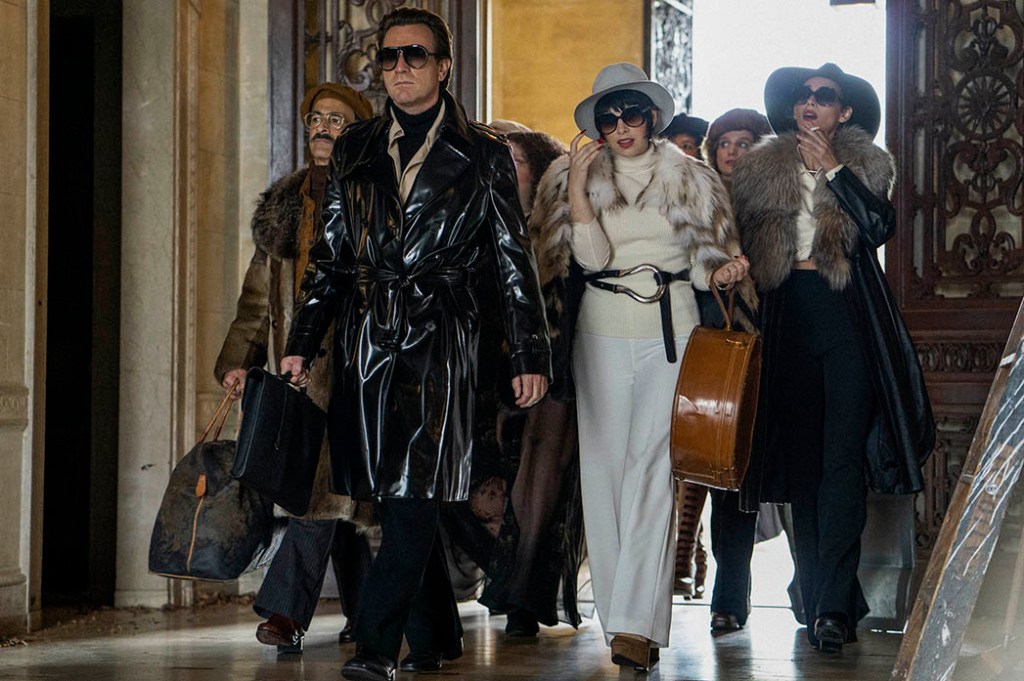 “Halston’s creative team arrives to the decrepit Palace of Versailles with a lot of style. To get the ensemble to feel like a family, we had Sunday dinners at my place where everyone pitched in, hung out, ate, drank, and gossiped into the night.” 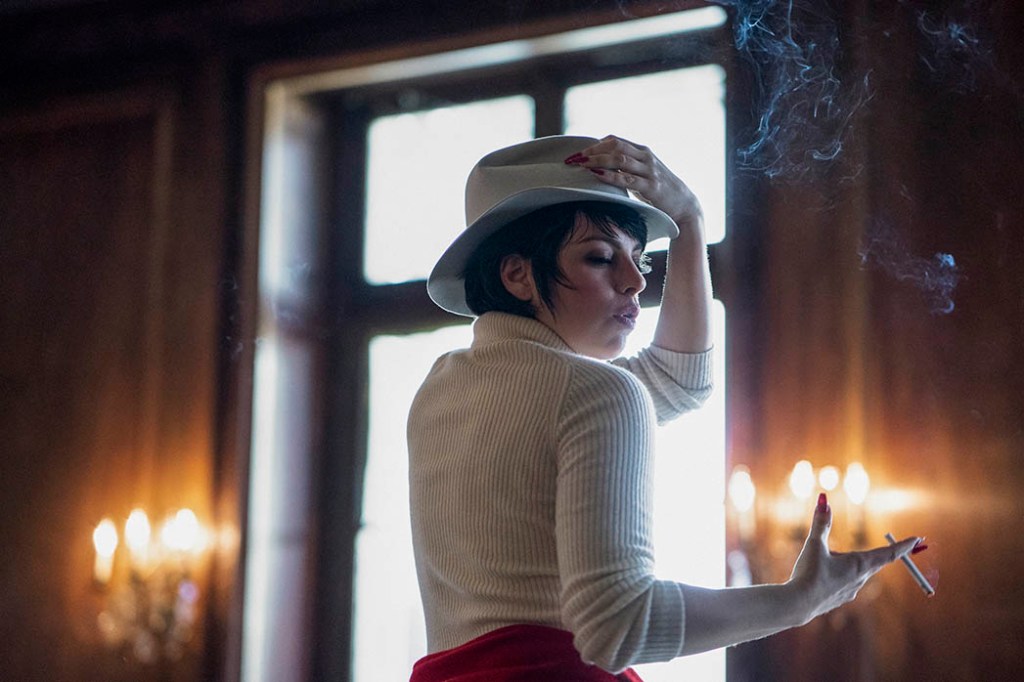 “We improvised a scene where Liza rehearses her Battle at Versailles number for the show alone in one of the grand galleries in the palace. It’s these grace notes, seeing Liza in this private moment, that makes the portrayal so dimensional.” 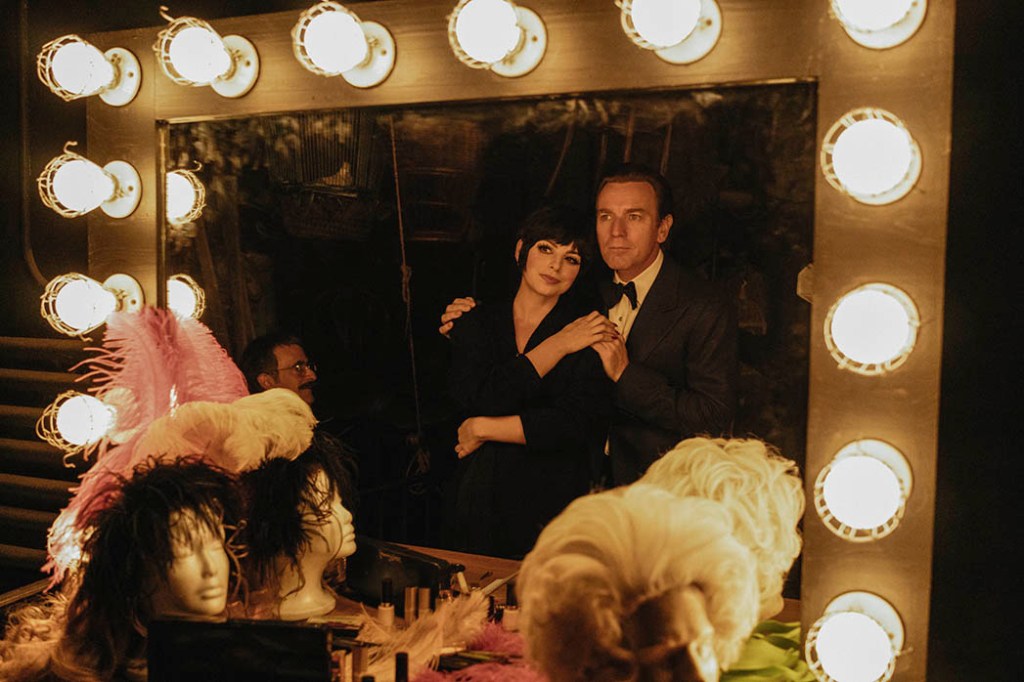 “Halston checks in backstage with Liza before the American presentation at Versailles. We tried to convey that Halston and Liza always gave each other their best selves in their friendship.” 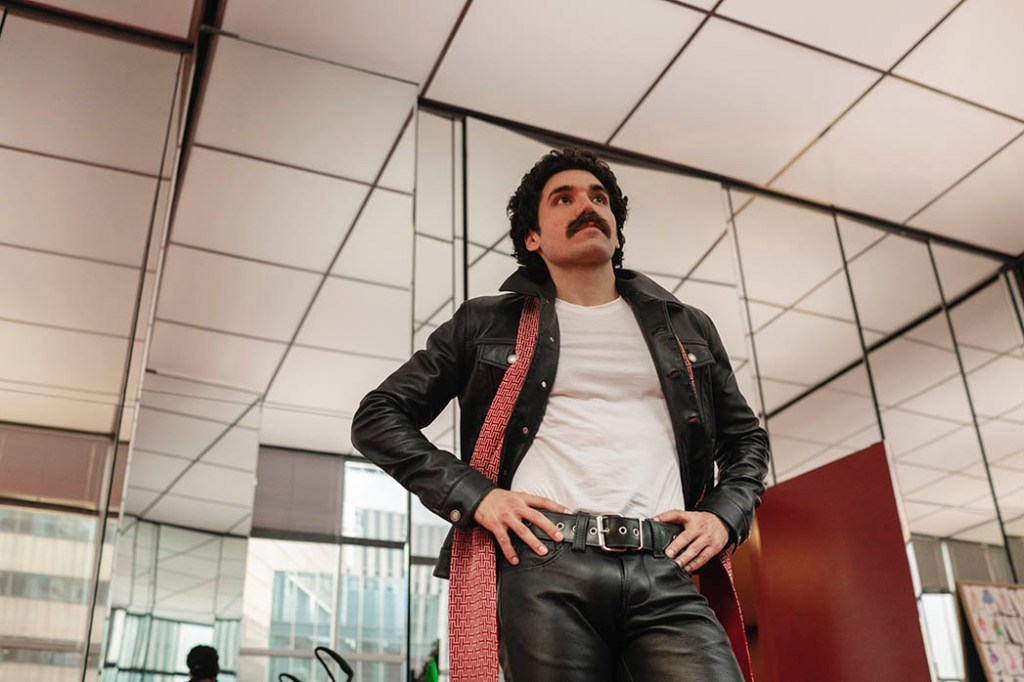 Victor Hugo (Gian Franco Rodriguez), Halston’s outrageous lover, looking out of place in full leather at the Olympic Tower. “Gian Franco met the challenge of this larger-than-life character who was a Dada artist, hustler, sexual outlaw and general disruptor. He made us laugh every day.” 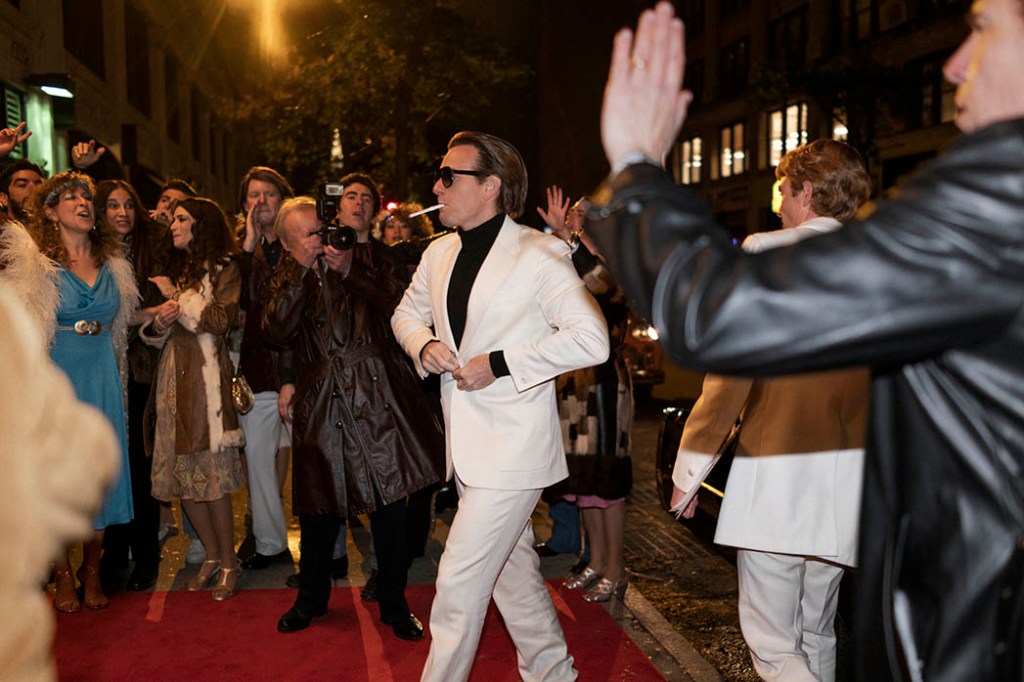 Halston arrives to Studio 54. “Andy Warhol described Studio 54 as ‘a dictatorship at the door, a democracy on the floor.’ The arrivals were as significant as the party inside; these people were here to be seen. We cast real photographers from the period to work as paparazzi: Here in black leather is celebrity photographer Patrick McMullan.”

“This epic tableau depicts Halston and his entourage as they greet the press like rock stars at Paris Orly. It was important to us to get the members of Halston’s court correct — like Pat Cleveland (Dilone), a legendary runway model famous for her flawless turns and Pat Ast, Halston’s top salesperson and sometimes large-sized model.”

“The third hour opens with a sequence of Elsa Peretti (Rebecca Dayan) creating the amphora pendant that will become Halston’s iconic fragrance bottle. We really give Elsa her due in this episode and we recognize her skill as an artist and the importance of her work with Halston.”

“Eleanor Lambert (Kelly Bishop) orchestrates the press at Orly Airport. Lambert, an innovator of public relations, was the driving force behind the Battle at Versailles, a benefit fashion show where four French and four American designers showed together.”

“Here we see Elsa Peretti onstage in Versailles in a particularly innovative Halston gown (it has no top) flanked by The Halstonettes. Casting the Halstonettes was a lot of fun. Halstonettes was a nickname for Halston’s diverse ‘cabine’ of models who not only walked in his shows but accompanied him everywhere. “

“Joe Eula (David Pittu) was Halston’s closest collaborator. A fashion illustrator and veteran of the highest circles of the international fashion world, Joe is the conscience of the piece — and he’s seen it all.”

“Halston drapes a tie-dye silk kaftan on Elsa in this scene leading up to his first fashion show. Ewan actually cuts, drapes and builds the dress on screen. He practiced for weeks with our costume designer Jeriana San Juan and her team of seamstresses.” 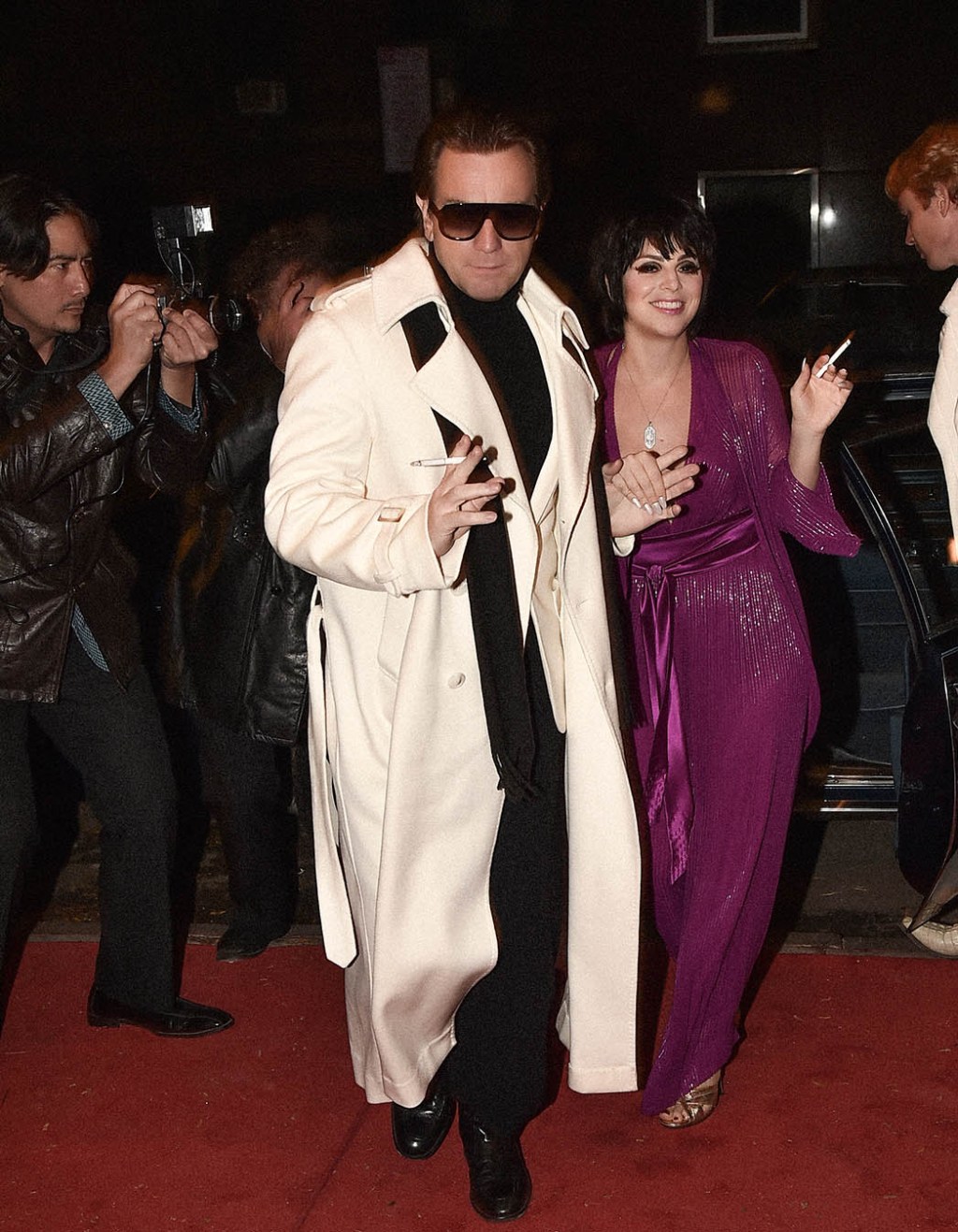 “This image of Halston and Liza arriving to Studio 54 is iconic. Pure glamour was what we were after here. Jeriana San Juan, our costume designer, created this dramatic white wool trench for Halston. For Liza’s beaded purple jumpsuit, one of my favorite costumes, Jeriana collaborated with designer Naeem Khan (whose family actually did all of the beading for Halston) to re-create this Halston original.” 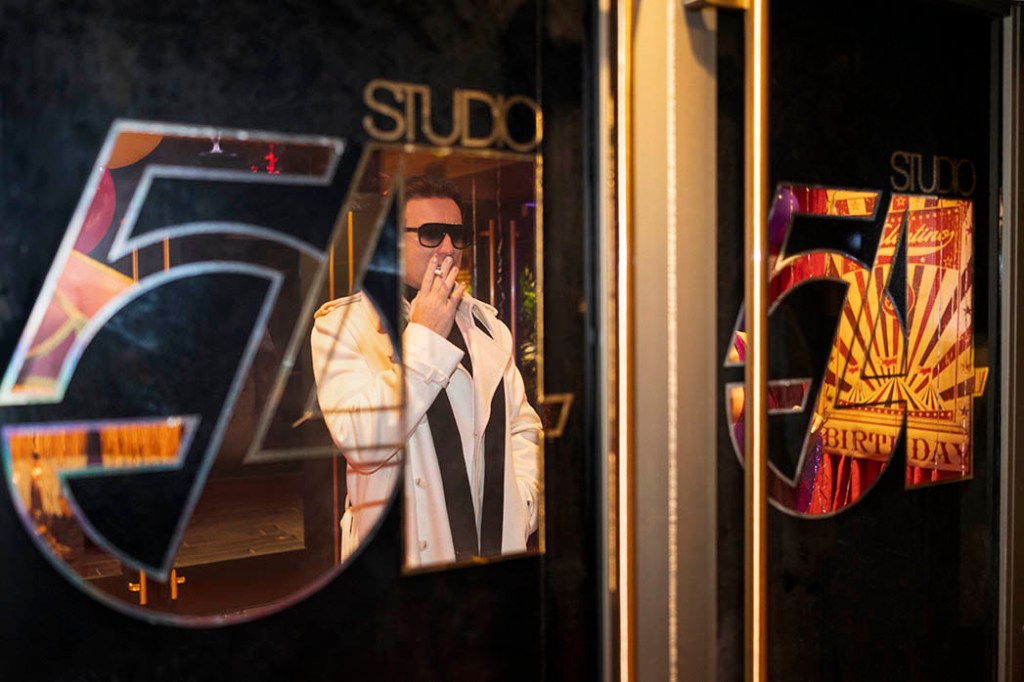 “A cool Halston waiting inside the lobby to Studio 54. Besides our throngs of extras and paparazzi waiting to get in, our production was pursued by real paparazzi who were dying for a look at our Halston. Sometimes it was hard to tell them apart.” 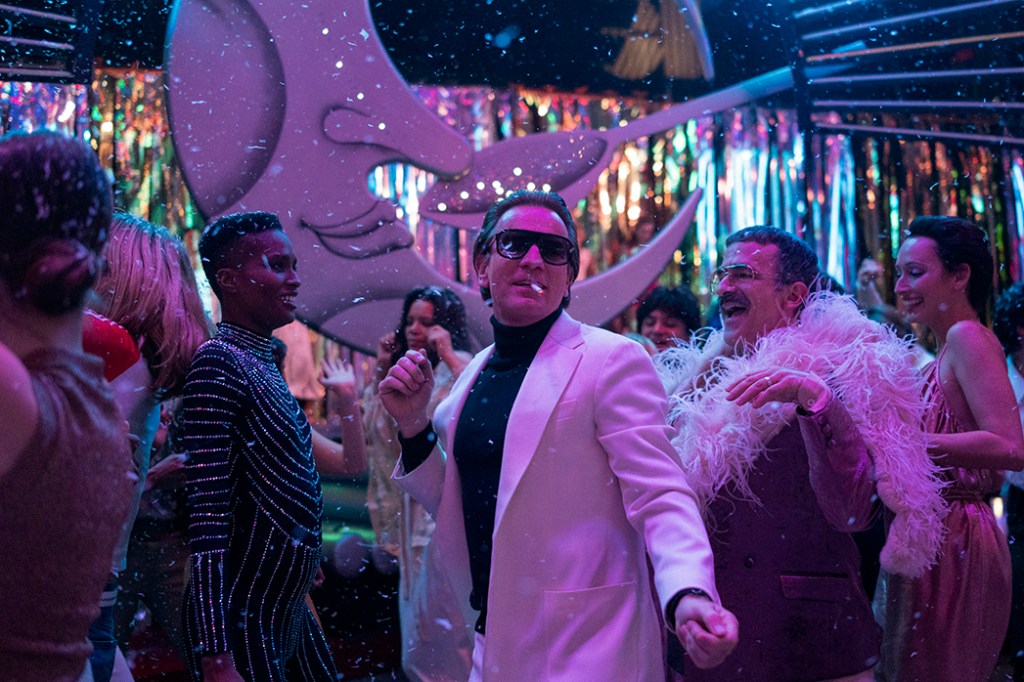 “The cast really cut loose when we shot the Studio 54 scenes. We wanted to communicate the inhibition of the place and the joy and freedom of really letting yourself go. Rebecca Dayan said, ‘It felt so real, it was my first time back in a club in a year.’ Ewan hit the dance floor and decided that this was how Halston would dance — a bit square, like a guy from another era.”