[This story contains spoilers for The Falcon and the Winter Soldier.]

When The Falcon and the Winter Soldier director Kari Skogland and star Sebastian Stan met for the first time at the Avengers: Endgame premiere, neither had seen a script for what was next, but they knew they faced a tall order. They not only had to follow up one of the biggest movies of all time and help introduce the world to a Black Captain America (Anthony Mackie), but they also had to breathe fresh life into Bucky Barnes, the character Stan had portrayed for a decade. (No pressure.) Here, the director and actor discuss Stan’s most daring scene, the talked-about moment when Bucky loses use of his metal arm, and the improv between Stan and Mackie that made the show what it is.

We’ve never seen something like a five-minute therapy scene in a Marvel property. Sebastian, how did Kari help you get into that scene?

SEBASTIAN STAN I knew we were going to head that way at some point. We hadn’t gotten a chance to go deeper, particularly the impact of everything he’d gone through. In order to jump off into the series, you had to establish that he was alternately facing these things and taking a chance on working on these things. The way Kari was shooting it, and the camera placement, was telling its own story and how my performance would fit into those angles and the marriage of the two. There was a different kind of visual storytelling to that scene and to the show that came from her that we hadn’t had before.

KARI SKOGLAND He never said, “Jesus, the camera is right in my flippin’ face!” Sebastian is particularly good at being able to use that tool, which for some people is a bit pervasive. What we were trying for is this type of jail cell that he’s in, his own mind. It’s really not easy to perform at that caliber for an entire day, with the camera absolutely on him.

STAN There was a freedom there, which was nice. We were able to go, “OK, let’s do a version of the scene now that is very funny and sarcastic, and let’s take him to these different places” to have options in the editing room. We ended up with a much more grounded, realistic version than was on the page, or how initially I had approached it. It was much more right this way, because it sets the tone for the series.

SKOGLAND I have this saying: “If it sucks, it won’t be in the movie. Don’t worry about it.” It releases us all. Even if elements don’t work, you discover something. To have everybody open to discovery is critical on any set, but in particular this one, because of the fact that we were remaking characters. Bucky was like a whole new guy. Bucky was dealing with post-traumatic stress, dealing with psychiatric issues, dealing with relevance, dealing with all these things coming at him, and it was important to experiment to find the tone. On the other hand, the levity — it was really easy to be funny. Particularly between Sebastian and Anthony.

Speaking of levity, there’s a moment when Anthony and Sebastian are talking about fighting wizards, about how Bucky read The Hobbit when it first came out in 1937, things like that. Is that in the script or is that improv?

STAN I don’t think Anthony’s and my improv necessarily revolves around wizards. That was all in the script. It’s one of those things where you look at something like that [and think], “This is going to sound very silly,” but then when you are doing it and committing to the choice of it full-heartedly in the moment, naturally it is funny because these two grown men are debating these things.

SKOGLAND There was a lot of improv between you guys. The scene after that — we went into the plane — originally had a whole bunch of words. Then we tried, “OK, let’s try a take with no words.” The two of you were glaring at each other.

STAN That’s probably what made it.

SKOGLAND Everyone was willing to experiment. Out of that came the genuine, authentic relationship between the characters. It’s hard not to drag their personal friendship in it as well. The two of them together, before you say, “OK, roll,” they are cracking jokes and enjoying each other’s company. It’s trying to capture that, but keep it within the characters. They were a lot of fun to watch, the ad-libbing and such. At the monitors we are wondering, “OK, what’s going to come out? What’s next?”

Do you recall any ad-libs, Kari, that you ended up using?

SKOGLAND Definitely with John Walker (Wyatt Russell), when we were in Prague, in the back of that truck. There were some fun ad-libs there that Bucky came out with, because Bucky’s attitude at that point was, “I don’t want to know this guy. I don’t want to be near him.”

STAN In episode two there were quite a bit of ad-libs with Anthony. We had that freedom. They had just reunited and were trying to one-up each other. 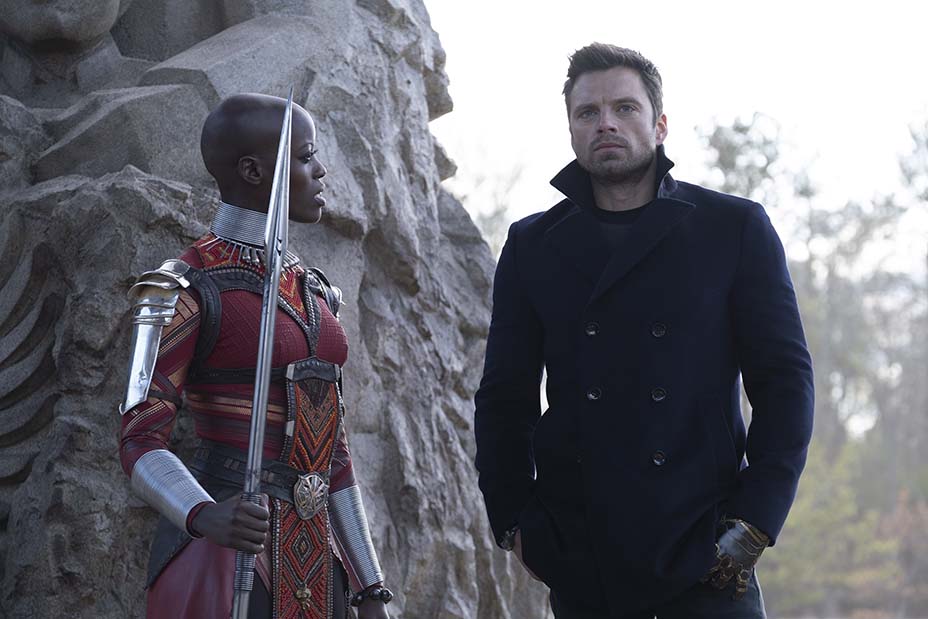 The Falcon and the Winter Soldier

One of the most talked-about moments was when Dora Milaje member Ayo (Florence Kasumba) disarms Bucky’s robotic arm. Sebastian says so much with just a look. What was the key to that?

STAN The Wakandans were the only ones who could rein in Bucky in any way, shape or form. That’s where his whole loyalty and allegiance is at that point in the series. When that scene happens, it’s him trying to feel out his perimeters and life again. He owes everything to the Wakandans. But in a way he is growing up again and breaking out again and trying to find how he can take charge of certain situations. [In that fight scene,] he is well aware that he’s gone too far, [teaming up with Daniel Brühl’s Zemo, a mortal enemy of both Bucky and Wakanda]. I always said to Kari, “Why would he ever stop them?” But it’s really Sam asking him, “Hey, we’ve got to put a stop to this altercation right now.”

SKOGLAND On the page, it looks like one thing. Then you get inside and go, “Actually, he wouldn’t do that, so how are we going to fix that?” It was through Sebastian bringing up some tough questions and us going, “Oh yeah, you’re right.” They [Stan and Kasumba] could play off each other to get inside that scene.

STAN In that moment when the arm falls off, there’s so much subtext going on in their relationship [with Ayo]. It’s a warning in a sense, and it’s a reminder: “Hey, you are here now, but just remember why.” It’s a little bit putting him back in his place, which I think he needed at that point.

Kari, was there a particular Sebastian scene that most impressed you?

SKOGLAND When he is in front of the fire [in an episode four Wakandan flashback scene] and Florence/Ayo is giving him the final test [to prove she has freed him of the brainwashing that made him into a weapon]. And he says, “It’s not going to work.” She says, “Don’t worry, I’m here to take care of you.” It was a magical night. I wanted it to have fire and be murky. I shoot way too much, and he had to do about 27 takes of that and stay in that place. And he did an amazing job. I was really so thankful that I was there to capture it.

STAN As an actor you see a scene like that and initially go, “Oh my God, yes! Finally!” And right after that, you’re like, “Oh God, I really have to try to do this thing.” And then you mark it on a calendar and you are just dreading crossing the days out as you get closer and closer. This was right after the holidays, so I was able to grow out my beard for it. I was definitely very, very nervous about it.

What’s something that stuck with each of you about working with the other?

STAN I still felt we needed to discover a new version of this character that we hadn’t seen before, one that had a sense of humor but also had this incredible, traumatic past, and it was very much about the tone and making sure we are earning those fun moments. Kari came without any preconceived idea of Marvel, these characters, what we’ve seen, what it needs to be or what are the expectations.

SKOGLAND Sebastian has a tremendous sense of story. For me, it’s all about trusting that they know more about their character than I do. When Sebastian comes to set with ideas because he’s been working on this scene all night and he’s found these bits and pieces he wants to try, it’s my job to go, “Yeah, let’s try.” He knows.