When it was first announced that Marvel Studios was developing television series for Disney+, it was immediately understood that such projects would afford Kevin Feige and co. the opportunities to explore more character moments than the two-hour Marvel films typically allow. And so far, there’s been no greater example of that than Adepero Oduye’s Sarah Wilson, a widowed single mother, small-business owner and sister to Sam Wilson (Anthony Mackie) on The Falcon and the Winter Soldier. Oduye has revealed a whole new side of the Marvel Cinematic Universe as her character sheds light on an Avenger’s domestic life including financial problems related to the family business.

For Oduye, she had just one request when initially discussing the character with head writer Malcolm Spellman and director Kari Skogland.

“Before [Malcolm Spellman and Kari Skogland] could really share much with me, I wanted to make sure that Sarah was not just there to pat a man on the back or to stroke an ego,” Oduye tells The Hollywood Reporter. “So I’m thankful for the space that was created. It allowed us to dive into [the Wilson family], ask questions, think about things and change things, if needed, within the dialogue to make it very clear, specific and grounded.”

Sam Wilson is not the only superhero in the Wilson family; it’s just that Sarah’s heroics receive far less fanfare by comparison. After all, Sarah raised two young kids by herself and kept the family business afloat during Sam’s 5-year absence via Thanos’ snap. When developing the character of Sarah, Oduye immediately drew inspiration from her own mother.

“People have been talking about that idea of Sarah as a superhero, and I think about my mother,” Oduye shares. “Sarah is a representation of all women figures who are out here getting things done, taking care of families and making sure livelihoods are there. Because we have to; we have no choice. Us, as human beings, we do extraordinary and have done extraordinary under all kinds of circumstances. I don’t have to go far to see that. My mother birthed and raised seven kids, and as an adult, I’m just like, ‘How? Wow. And thank you.’”

In a recent conversation with THR, Oduye also discusses Sarah’s complicated reaction to Sam’s shield being given to John Walker (Wyatt Russell), the generosity of Mackie during episode three’s phone call scene, and her fond memories from The Big Short set.

Since Marvel is quite secretive, did you know what you were auditioning for?

It was all quite vague. It was just brass tacks, but what I came to know fairly quickly was where in the story where we were going to take it from. So that is what really interested me.

Did you and Mackie eventually test together?

No! (Laughs.) I knew Mackie from before, but I met with Anthony before shooting started. We just talked about the characters. It was kind of like a rehearsal, but not in a typical sense.

What did Malcolm Spellman and Kari Skogland discuss with you at first?

It was making sure that Sarah was, first and foremost, grounded. Before they could really share much with me, I wanted to make sure that Sarah was not just there to pat a man on the back or to stroke an ego. And this was before I knew anything about what the story was. So once it opened up into what the story was about, Anthony was also part of those conversations with Kari. So it was just making sure of that brother-sister relationship, and that the questions of the story were clear as it pertained to the Wilson family’s world. Because if we were confused, then I feel like it would be confusing for the people watching it. So I’m thankful for the space that was created. It allowed us to dive into that, ask questions, think about things and change things, if needed, within the dialogue to make it very clear, specific and grounded. 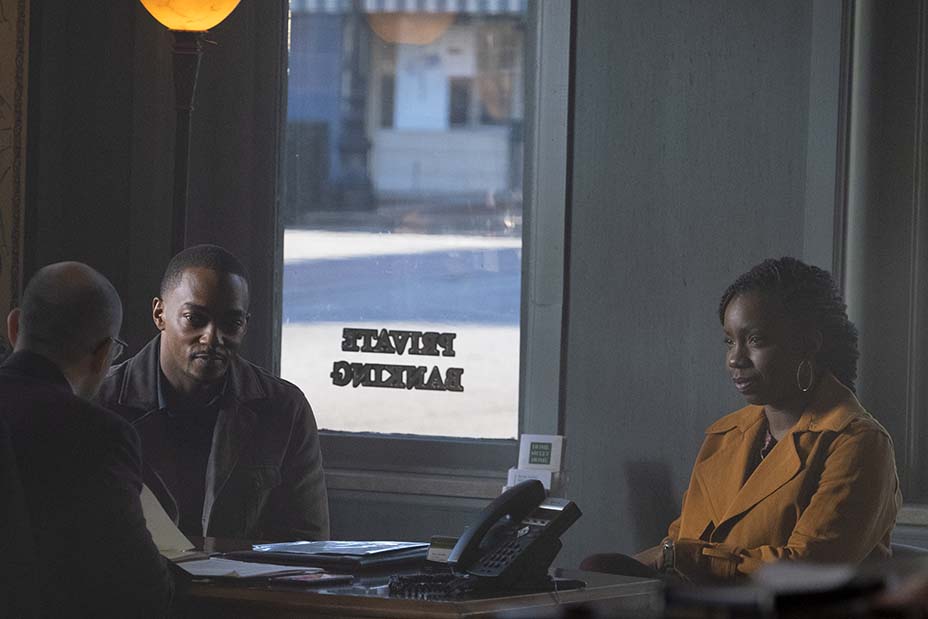 The bank scene was both shocking and unsurprising on many levels, but it also revealed that Tony Stark only paid the Avengers in goodwill. When you read this, were you just as stunned? Or did it fit your perception of Tony Stark?

I never thought about that side of it. You just see people doing superhero things, and they’re saving the world. When I read it, I was like, “Oh, wow. This is a very good point/question. How does this work?” So I never thought to think about this very good question. So then your mind starts running, like, “What are all the possible permutations in terms of how people make a living doing this?”

More importantly, even though Sam is an Avenger who helped defeat Thanos, his family is still treated just as unfairly as so many other Black Americans. Did you admire the fact that Marvel was putting the usual superheroics on hold to explore an important real-world issue?

Absolutely. It’s what drew me to the project. The fact that there was going to be an opportunity to explore something grounded and real, which so many people are experiencing day-to-day. It’s kind of like watching the news. You see what is given to you, but behind all of that are people and families who are dealing with all of these issues. So I really appreciated getting to portray that and be a part of that in The Falcon and the Winter Soldier.

When Sarah saw Sam’s shield in the hands of the Government’s preferred image of Captain America, what was going through her mind?

That’s a good question. I think about it from my own perspective. Even though you know bad things happen and have happened, such as disenfranchisement, there’s that human part of you; I don’t know if it’s hope or what to call it. But once you’re hit over the head again with what you already knew, you feel a little bit stupid for being shocked or surprised. Then you say, “What else did I think would happen?” So I imagine that’s what’s going on for Sarah in that moment, particularly because it’s attached to her brother who she loves so much, and knows he does this work. There was all this interest to see that it went in a way that she both maybe expected but was also irked by, surprised by, saddened by or angered by because of her attachment to her brother. 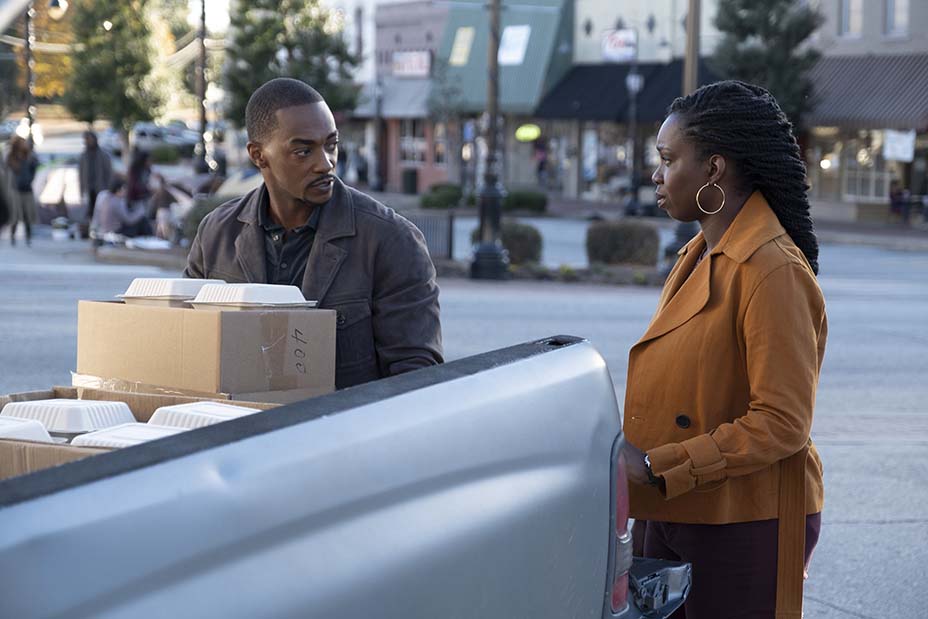 The show is about many things including forgotten heroes. So when Sam is given a hero’s welcome by a couple of Sarah’s employees, the camera mostly stays on Sarah as she keeps working. Maybe I’m reaching here, but the show seemed to be making the point that she should also be treated like a hero after raising two kids by herself and keeping the family business going while Sam was gone for 5 years. Did you have a similar takeaway?

People have been talking about that idea of Sarah as a superhero, and I think about my mother. Sarah is a representation of all women figures who are out here getting things done, taking care of families and making sure livelihoods are there. Because we have to; we have no choice. Us, as human beings, we do extraordinary and have done extraordinary under all kinds of circumstances. I don’t have to go far to see that. My mother birthed and raised seven kids, and as an adult, I’m just like, “How? Wow. And thank you.” There’s no amount of words to thank her for all that she’s done, and I’ll never even know all that she’s done and did.

Will we find out what actually happened to Sarah’s husband by series end?

I think all you get to know is that she’s a widow. And that’s it.

In episode three, Sarah blows Sam’s cover in Madripoor. Were the two of you able to shoot that phone call while the other was out of frame, or did scheduling not work out?

No, we got to do that together on each side. It was really generous of Anthony to do that. He was like, “Of course, I’ll be on the other side so you don’t have to talk to some random person.” (Laughs.) So it was great.

“We’re expecting to be expecting.” What do you remember from your couple days on The Big Short?

Outside of me being in it, it was one of those scripts that was undeniable. You might not have known all the language in terms of what happened in 2008, but it was undeniable. I just remember sitting back and watching actors like Jeremy Strong. I was just in awe of how in it they were. So my experience was just getting to watch and be with all these amazing actors, especially Steve Carell, who I just absolutely adore on so many levels. (Laughs.) There are so many things I love him in, but getting to see him do something dramatic and just getting to watch… All the artists involved in it, Adam [McKay], and watching two cameras going, and how they’re communicating with each other about what the shots are going to be, I’m a geek like that. I like to watch and see people at their best when I’m on set.

***
The Falcon and the Winter Soldier is now available on Disney+.