The forces responsible for AMC’s The Walking Dead universe have long subscribed to Egon Spengler’s sage wisdom, keeping the flagship zombie drama and spinoff Fear the Walking Dead separated by both distance and time. Given the news about Walking Dead veteran Lennie James’ upcoming series-regular role on Fear the Walking Dead, it now looks like the golden Ghostbusters rule has been vaporized — and in the process, the two shows look set to overlap in time, if not space.

Heading into the Talking Dead announcement about the Fear and Walking Dead crossover specifics, most fans were set on the theory that Abraham Ford, the late and great bruiser played with relish by Michael Cudlitz, would serve as the bridge between the two sides of the AMC zombie apocalypse. After all, before joining up with Rick Grimes (Andrew Lincoln) and the rest of the gang, Abraham originally hailed from Texas — the same place where Fear the Walking Dead is heading in season four, with production now underway in Austin. Through three seasons, Fear the Walking Dead has told a story set years and years before the current events of The Walking Dead, roughly around the same time as season two of the flagship series. With that in mind, it made sense for Abraham to appear on Fear, as his character didn’t link up with Lincoln’s Rick until the tail end of season four.

Sadly, those Abraham dreams have been smashed to smithereens, not unlike how the barbed-wired baseball bat known as Lucille obliterated the late Sergeant Ford’s skull in the seventh season premiere of The Walking Dead. Instead, another iconic face from the original series will make the leap over to Fear: Morgan, the first major character viewers ever met in the Walking Dead universe following Rick Grimes, at least in terms of the individuals who are still alive.

But how does Morgan appearing in the current Fear the Walking Dead timeline make sense, given what we know about the character’s history? Here’s where it gets interesting: It doesn’t make sense — unless Fear the Walking Dead is about to experience a massive leap forward in time. (The live stream of James’ first day on set was nothing more than the actor walking to the makeup trailer.)

We don’t know everything about Morgan Jones, but we do know his apocalyptic history in vivid detail:

•  We first met Morgan in the Walking Dead pilot, seeking refuge in Rick’s hometown when the lawman first awakens from his coma and into the world of the dead. Morgan’s wife, Jenny, had already turned at this point. Morgan’s son, Duane, was still alive.

•  After Rick left Morgan in the pilot, viewers heard nothing from the Joneses again until season three’s “Clear,” written by current Walking Dead showrunner (and Fear the Walking Dead executive producer) Scott Gimple. Years had passed at this point, and in that time, Duane died thanks to Morgan’s inability to kill his zombified wife. Morgan remained in Rick’s hometown all of this time, and remains there still after Rick, Carl (Chandler Riggs) and Michonne (Danai Gurira) hit the road with enough weapons to fight against Woodbury.

•  In season six’s “Here’s Not Here,” also written by Gimple, we learned what happened to Morgan after parting ways with Rick for the second time. He continued his murderous rampage, killing anyone he came across, until joining up with Eastman (John Carroll Lynch), the aikido master who took Morgan under his wing and taught him that “all life is precious.” Morgan stayed with his new pacifistic mentor until Eastman’s death, enabling a rehabilitated Morgan to once again hit the road.

•  Shortly after leaving Eastman, Morgan spotted signs for Terminus, which put him on the path toward reuniting with Rick for a third time. We saw Morgan on the road toward Rick and Alexandria at a few points during season five, until he finally met again with his old friend in the final episode, just in time to watch Rick shoot Pete Anderson (Corey Brill) in cold blood. We have been with Morgan ever since.

Considering that history, there is no way Morgan could have existed in Texas alongside the characters of Fear the Walking Dead during the AMC spinoff’s current timeframe — at least not without a major jump over the shark. A major jump in time makes much more sense if only in terms of logistics, especially given how Fear the Walking Dead ended its third season with the entire status quo up in the air.

In its season three finale, Fear left the fate of every major character hanging in the balance, potentially drowned or otherwise killed in an explosion that caused the Gonzalez Dam to overflow. The lone exception: Madison Clarke (Kim Dickens), who was seen to have survived the incident. The ambiguous finale allowed outgoing Fear the Walking Dead showrunner Dave Erickson a measure of closure over the story he had been telling across three seasons of the series, while providing a blank slate for incoming showrunners Andrew Chambliss and Ian Goldberg, with Gimple serving as an executive producer as well.

Already, it’s clear that there are major creative shakeups happening on the Fear the Walking Dead story front, with two significant casting announcements in the past month: Garret Dillahunt (Deadwood and Raising Hope) and Jenna Elfman (Dharma & Greg and Imaginary Mary) have both signed on as new series regulars for season four. Now, a third new series regular has been added, in the form of Lennie James as Morgan — and based on what Gimple said about the move during the Talking Dead announcement, it certainly sounds like this is a version of Morgan fans have not seen yet: “Morgan’s arc in The Walking Dead season eight positioned him for the story on Fear the Walking Dead.”

As far as the comic books from Robert Kirkman and Charlie Adlard on which The Walking Dead is based, Morgan no longer exists. The character is killed in the comics during the same walker assault on Alexandria as the one featured in season six of the AMC adaptation. Much like Melissa McBride’s Carol, then, the TV version of Morgan is a blank slate moving forward. Given Morgan’s current arc in season eight, in which he’s once again struggling with issues of mercy and wrath, one can easily see why he would remove himself from Rick’s group permanently, putting him on a path toward Texas.

'The Walking Dead': How the 100th Episode Honored its Past

In other words, there’s no reason why Fear the Walking Dead can’t skip forward several years into the future and tell new stories with new characters, at a period of time that closely aligns with the current events of the flagship Walking Dead. Indeed, there are a lot of narrative reasons why such a time jump would be useful, whether that’s excising problematic characters (this would be an easy way to move past Frank Dillane’s Nick, as one potential example, though a photo of Dillane at the season’s first table read, embedded below, suggests Nick’s safety — for now) or hitting fast-forward on some much needed character evolutions. Alycia Debnam-Carey’s Alicia, for instance, was well on the way toward becoming a fully self-sufficient soldier of the apocalypse during season three; meeting the character again several years past that point eliminates the need to experience her growth as a warrior in slow motion, and instead hop right back into the action with a story much better suited to the tried-and-true actress’ capabilities. 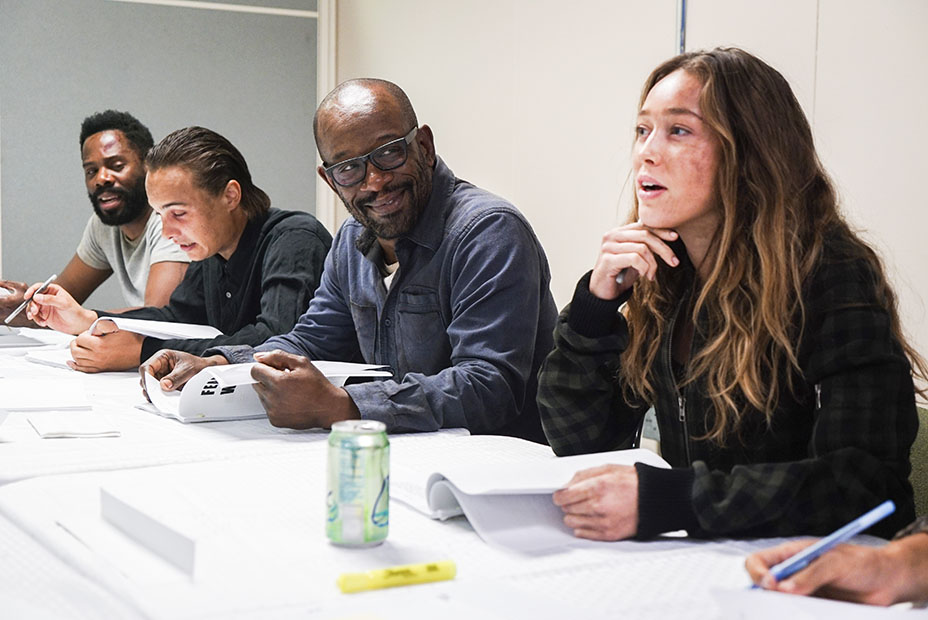 What’s more, if Fear the Walking Dead doesn’t benefit from the much-needed creative reset, a leap forward in time affords AMC the option of bringing the show’s most successful characters (like Alicia and Madison) over to The Walking Dead proper, without any massive leaps in logic. After all, assuming that Morgan will arrive in Texas with full knowledge of Rick’s community, it’s not a stretch imagining him bringing any and all Fear stragglers back to Alexandria should things not work out in Austin.

In the past, there has been an outward effort to keep The Walking Dead and Fear the Walking Dead separate from one another, to the point that a storyline involving characters from the CDC was ultimately nixed from appearing in Fear. Despite its relative ratings success, Fear never captured the zeitgeist in the same way as its older sibling, due at least in part to its isolation from the main series and its status as a veritable prequel. In bringing the two shows closer together in time and through the lens of one of the most recognizable and enduring faces from the franchise, AMC has the opportunity to deepen the world of the Walking Dead through two aligned entities.

Dr. Spengler warned that crossing the streams “would be bad,” but in the case of The Walking Dead, this nuclear option could be a very good idea indeed. For now, here are the only official statements from the Walking Dead powers that be on what Morgan’s new role on Fear means moving forward:

“Lennie James’ brilliance and humanity in his portrayal of Morgan Jones has been part of the DNA of what makes The Walking Dead so fantastic since the very beginning,” said executive producer Scott M. Gimple. “Morgan’s story will continue in this season of The Walking Dead, and then, it begins again in the upcoming season of Fear the Walking Dead, pushing the series — and the Waking Dead universe itself — into new directions and possibilities.”

“To take Morgan into this new realm and landscape, to see who he could now be, to see where his story could go in the world of Fear the Walking Dead is wonderfully exciting and I am really looking forward to the challenge,” said James. “My time on The Walking Dead has been a blessing and one of the top working and personal experiences of my life. That cast and crew will have my love, my respect and my deep gratitude until the end of my days.” 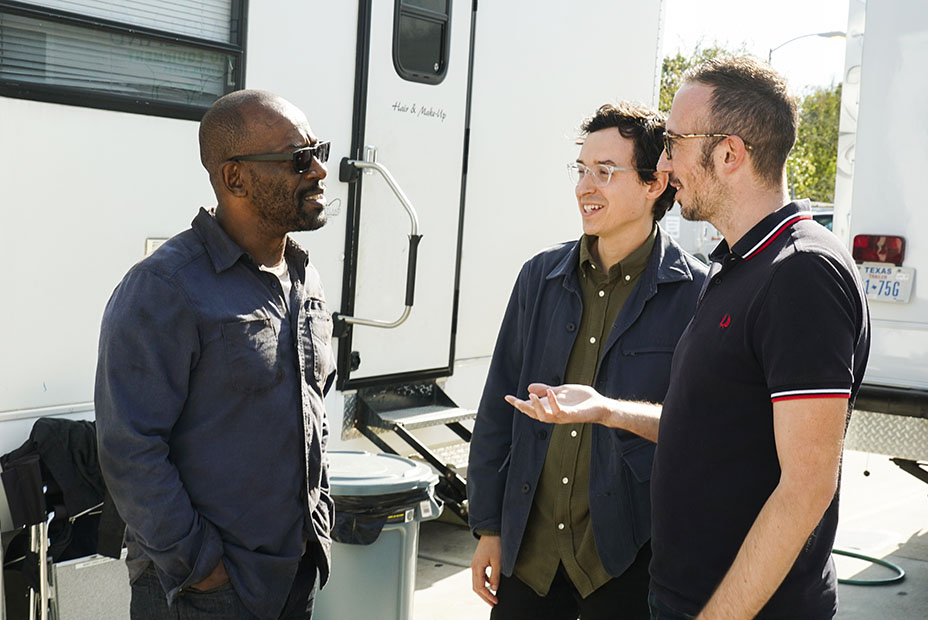 What are your theories about Morgan’s new role in the Walking Dead universe? Sound off in the comments section below, and follow THR.com/WalkingDead for more developments.

Critics’ Conversation: The Exhilarating Stupidity of Netflix’s ‘The Circle’