With little time left in the third season of the AMC zombie apocalypse series (which also serves as co-creator and showrunner Dave Erickson’s final run of episodes), Fear the Walking Dead is making short work of several of its characters and storylines. Travis Manawa (Cliff Curtis) was already removed from the playing field in the second episode of the season. Since then, regulars Dayton Callie and Sam Underwood (as Jeremiah and Jake Otto, respectively) were both killed off from the series. Now, add another main character to the body pile, and another season one veteran at that: Ofelia Salazar (Mason), who died after sustaining a zombie bite in the previous episode.

“It’s just so nice to finally be able to talk about it now,” Mason tells The Hollywood Reporter about how she’s feeling, now that the death of Ofelia has finally played out on the show. “These poor fans have been asking: ‘What happened? Were you bitten?’ And I just have to laugh! ‘The weather’s nice, right?’ I kept having to avoid, avoid, avoid!”

There’s no avoiding it any further: Ofelia is gone, a consequence of her heroic attempt to save the lives of the ranchers in last week’s “This Land is Your Land.” With a walker-borne infection coursing through her veins, Ofelia did her best to stay alive long enough to have one final moment with her father Daniel (Ruben Bladés), falling short of the goal by no more than a few seconds.

With her time on the show at an end, Mason joined THR for one last look back at her role across three seasons of Fear the Walking Dead, her regrets about Ofelia’s fate, and the one item she was thankfully able to cross off of her zombie apocalypse bucket list. 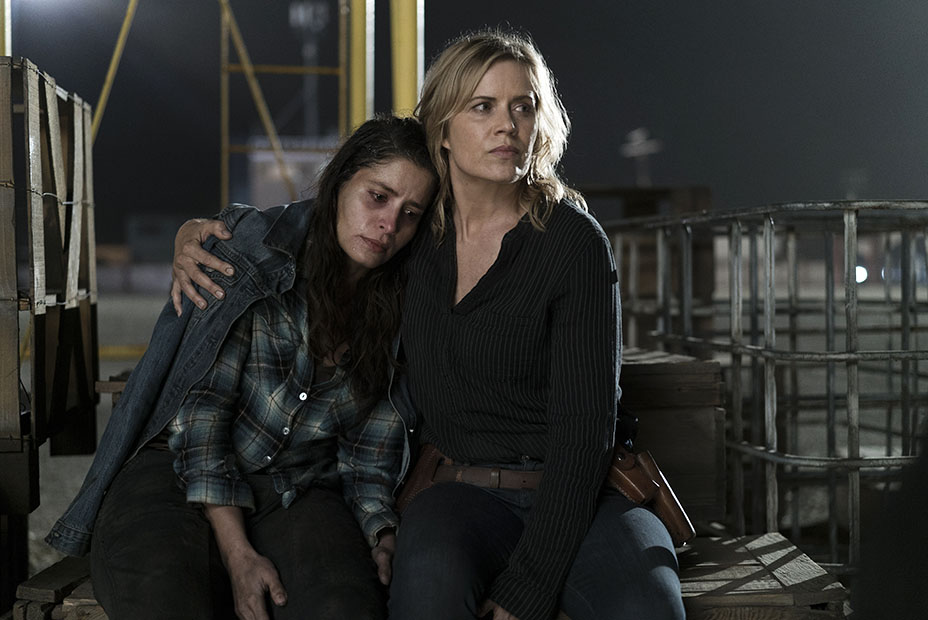 Talk us through learning about Ofelia’s death. Was this before or during production on season three?

It was during. It was actually toward the end. To be honest, I’m not sure if they had decided yet where the season was going, because with Dave Erickson leaving and new showrunners coming on, I’m not quite sure what that conversation was. But I learned around episode 310. It was sort of a collaboration between myself and Dave. I don’t know where the show is going to go next year. They could be going out of the country, and my husband and I are trying to start a family, so it became a conversation of trying to figure out what we’re going to do here. And he said to me, “Look, I think it’s going to be so much more poetic if you’re part of Daniel never being able to say his last words to you.” I agreed with that. I think there’s something beautiful about him being forced to put his daughter out of her misery, and also in theory it’s paying for all of the sins he’s committed. It’s what he was haunted by, and what his biggest fear was, that his daughter would follow in his footsteps, or that she would become a victim to this world, and ultimately he has to put her out. And I love the fact that she didn’t turn.

You’re not disappointed that you didn’t get to become a zombie?

It would have cheapened it. It would have been more of a struggle for him, making sure his daughter doesn’t bite him, as opposed to this beautiful choice he has to make to not let her become that. That’s him choosing to do it, which I think is so much more difficult, as opposed to just survival and having to put a bullet in somebody’s brain.

The final Ofelia moment involves your character, now deceased at this point, in her father’s arms. What are your memories of shooting that scene?

I’m bummed about two things, and this is just my own personal opinion. Madison (Kim Dickens) is walking Ofelia to the place where she sits down, and Ofelia bends over and vomits up blood. To me, that was such a huge moment. I don’t know why they cut it. First, it was very gross to shoot. (Laughs.) Use it, damn you! But two, it shows how difficult it was for Ofelia to hold on. For you to be vomiting blood, there’s obviously internal damage happening. She’s holding on so strong just to see her father, and then she dies literally moments before he gets there. The other thing is that we did several takes, and there were a few takes where Ruben was sobbing. It came out as every fear he’s ever had and every sin he’s ever committed coming out in that moment through his tears. I’m supposed to be dead, and I’m trying desperately not to sob. I had tears running down my face. He moved me so much. I know they ultimately used the scene where Salazar is a bit stronger, but me personally, there was so much beauty in his vulnerability and in his rawness in that moment.

Before she dies, Ofelia tells Madison that she was looking forward to getting to know her father, leading to a moving speech from Madison about how children already know their parents thoroughly. It moves Ofelia to tears. How did you put yourself in that emotional place?

I have crippling daddy issues. (Laughs.) I know some actors use menthol sticks or they cut, but I could cry right now. The one thing that I have at my disposal, that I’m lucky about, is that my emotions are always super raw and they are always at my disposal. Those tears were real. The tears where we’re sitting at the edge of the truck and they tell me that Daniel’s alive? Those were real. When you have crippling daddy issues, any time someone talks about a father figure, the tears start flowing, so you just need to turn the camera on. Thanks, dad! (Laughs.)

What did you think about the evolution of Ofelia throughout season three, where she exited season two on an uncertain note opposite Jeremiah Otto and became rather militant under Walker’s wing?

That’s what I was begging for all along. My only wish is that it came sooner. I wish it didn’t take the amount of time that it did. I know they need to develop all of the characters, but it would have been so amazing if Ofelia became, in her father’s absence, just like her father. I would have loved to have seen her mirror some of his rhetoric and his actions and his behavior. I think it would have spoken volumes to the fact that she is her father’s daughter, and this has always been in her, and maybe when she discovers in season one what he is, maybe that fear is that she knows she had those predilections, and that’s why she freaked out when she learned about her father.

Did it feel like she was on that path this season, before her death?

Oh, for sure. The beauty with Ofelia is she very much has her mother as a moral compass within her, but she also very much has her father within her. The more she progressed, the more she realized that in order to survive the zombie apocalypse, you have to be like Daniel Salazar. As nice as it is to have a moral compass, it just doesn’t quite work in that world. The longer she would have been alive, the more she would have become like him. The one amazing thing would have been if the two of them had gone off on their own as a father-daughter killing duo. It would have been a great spinoff. You see friends fighting together and love interests fighting together, but you never quite see a father-daughter duo taking on the world. 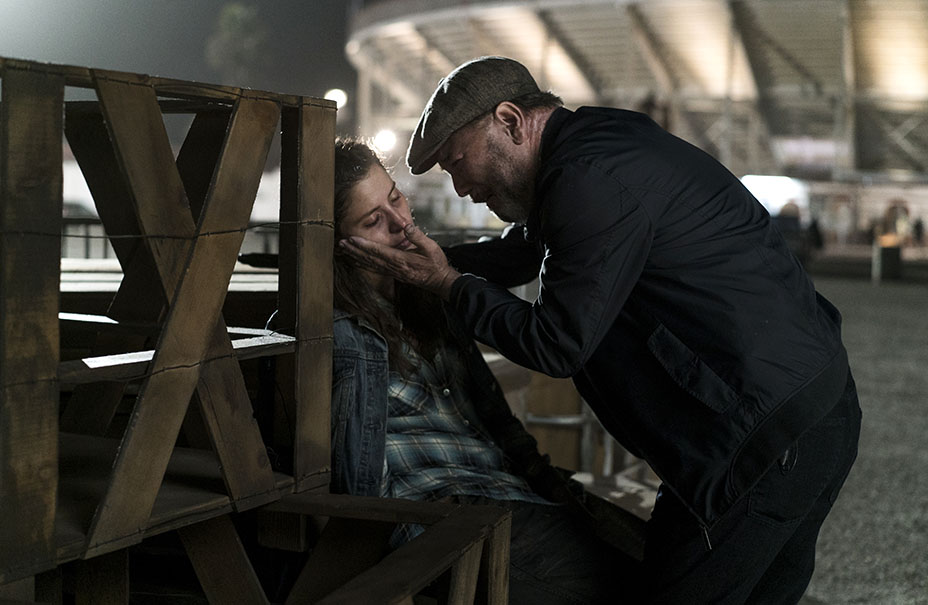 Last week’s episode was another intense one for you, where the fateful bite occurs, after Ofelia struggles through one of my own greatest fears: an extremely claustrophobic space, crawling through the ventilation shafts to get air to the ranchers.

Parts of it were in an actual air duct that they recreated. There was a little bit of a claustrophobia aspect to filming it, and I’m definitely not a fan of tight spaces, either. For the other parts, when you see us from the side angle, they took a wall out so the camera could film us. But when you see us from the front angle, we’re in there, and the camera’s in there with us. It was definitely a little bit claustrophobic. I’m the surprise guest on The Talking Dead, and they have a blooper reel where you can see a little bit more of how they shot that scene.

You mentioned before that you and Dave Erickson worked together on closing out the arc for Ofelia. What was it like working with him, and how do you feel about his looming departure from the series?

It’s such a bummer to see him go. I associate him solely with this show. I’m also really excited for him. I can’t wait to see what he does next. He’s the sweetest, most soft-spoken man. My constant joke with him is that he must be drowning kittens on the weekend, because he’s so sweet and I don’t trust it. (Laughs.) I love busting on him. He’s a really, really sweet man.

Do you wish Ofelia was continuing on into this next mysterious chapter of Fear the Walking Dead, whatever the future holds in season four?

Of course! Of course. But for me, if she had survived, it would have been such an amazing thing that could have happened with her and Daniel. I think it would have been really cool. But there are huge things changing with the show. And me being pregnant? It would have been interesting to figure out how Ofelia’s gotten pregnant, too. By the time we would start shooting, I would be enormous, and then there would be a very small child hanging off my breast. (Laughs.) How do we handle that? Ofelia found a kid!

Is there a personal highlight for you as you walk away from this series, as far as any line items you were able to cross off your zombie apocalypse bucket list?

Maybe I have some major mental issue, but watching my character smash skulls with a hammer… why does that give me so much joy? I don’t understand! It’s so visceral! As an actor, it’s so much fun to do physical things. I always want to do my own stunts. It’s very exciting to watch that and maybe tell my kids some day, “Look! When mommy was pregnant with you, she was smashing skulls! And here you are!”

Exactly! (Laughs.) “You will eat your broccoli!” We’ll have that video on a loop in our house, terrifying the poor kid.

'Fear the Walking Dead': Ruben Blades on Sudden Return and Road to Redemption

What did you think of Ofelia’s demise? Sound off in the comments below.