Continue to The Hollywood Reporter SKIP AD
You will be redirected back to your article in seconds
Skip to main content
June 4, 2017 8:10pm
Logo text

In his final season as showrunner, Fear the Walking Dead mastermind Dave Erickson is leaving it all on the table — or on the rocky ground beneath a helicopter, as it were.

The first two episodes of the Walking Dead spinoff’s third season make it clear that nothing is sacred and nobody is safe in the zombie apocalypse. While the series was already well accustomed to killing off main characters, most viewers assumed that the core protagonists of Madison Clark (Kim Dickens), her two children Nick (Frank Dillane) and Alicia (Alycia Debnam-Carey), and veritable husband Travis (Cliff Curtis) would all be safe for quite some time. As it turns out, not so much, at least in one of those characters’ cases.

The second episode of the season, which aired immediately following the premiere, focused on the surviving members of the Clark-Manawa clan as they traveled to a compound, populated by Jeremiah Otto (Dayton Callie) and his community of doomsday preppers. Madison and Nick arrive without too much incident. It’s a much more hectic affair for the folks traveling by air, including Alicia and Travis. Their helicopter comes under attack from mysterious gunmen, bullets piercing through the windshield. Out of nowhere, two bullets strike Travis: one in the neck, another in his midsection. Alicia watches in horror as her bloodied father figure falls from the helicopter to the rocks below. While we don’t see the body land, make no mistake about it: Travis Manawa is dead and gone.

“This is a season that exists in the shadow of Travis’ death,” Erickson tells The Hollywood Reporter about the shocking twist. “It’s about the emotional impact it has on Madison, Alicia and Nick, and finding some way to mourn him and move on ultimately. If you break it into the stages of grief, that could actually track as well.”

According to Erickson, Travis’ arc was initially meant to last longer than one episode and change. In season one, Travis promised his dying wife, Liza (Elizabeth Rodriguez), that he would protect their son Chris (Lorenzo James Henrie) at all costs. When Chris died at the end of season two, Travis went on a tailspin, losing himself to the primal vortex of the apocalypse. Season three was set to explore that shift within Travis in greater detail, but the events of the premiere episode (in which Travis saved Nick from certain doom) quickened the process.

“For me, the arc for Travis in season three was going to be about redemption,” says Erickson. “You have a guy who really in his mind broke the promise he made to Liza back in season one. He promised to protect their son, and he’s failed to do that. The only thing left for him in his mind is having failed his biological son, he needs to save his surrogate son, Nick. When he saves Nick, and there were conversations about that happening deeper in the season, this story was essentially over. He did what he needed to do. I think Cliff played it beautifully in the end of the premiere. He’s accomplished something. He returned Nick to his mother. But pointedly, he’s not part of that family embrace at the end of the act. There’s a certain remove and a certain resignation, even in his own mind. It didn’t fix anything for him. It may have brought Madison back with her son, but it didn’t repair anything in Travis. I think he knows that. There’s a certain fateful quality coming off of that.” 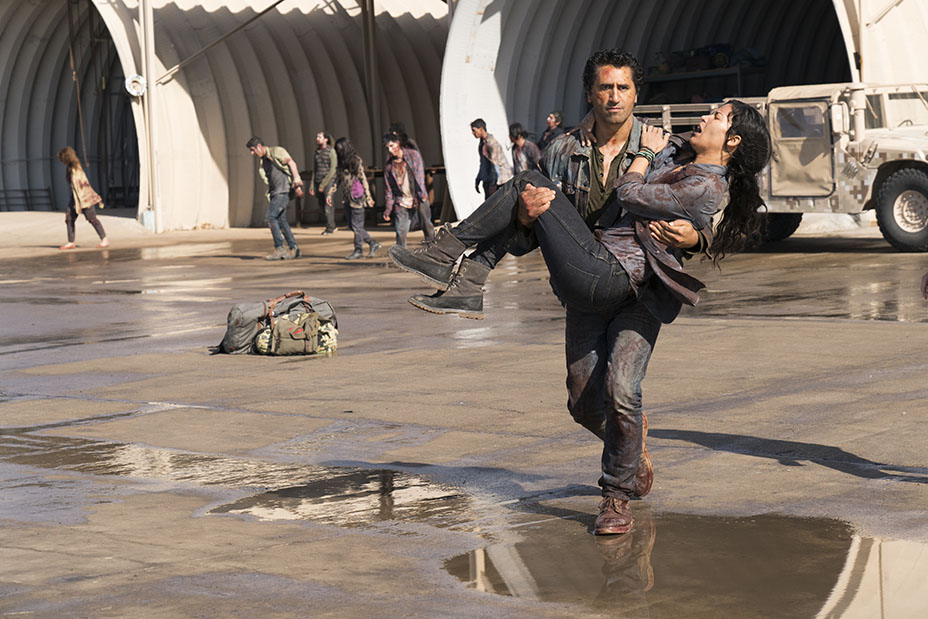 As for how Curtis reacted upon learning of Travis’ death, Erickson says, “He understood the larger construct of the story and the narrative. Unfortunately we’re all part of a much larger story. As long as it’s actually servicing the greater story, nine times out of 10 when I have conversations with actors about this very thing, there’s an understanding and appreciation of that. I think everyone has a certain degree of selflessness where they feel like they’re serving a larger construct. I’m sure he would have rather had a few more episodes where he could kick ass and continue to kill zombies, but I also think it’s not what Cliff is about ultimately. I think he got it and I think he understood. And now he gets to go on and do a little art house film with James Cameron.”

Indeed, Curtis has signed on for a lead role in the upcoming Avatar sequels; in that sense, the writing was on the wall, as far as his character’s mortality is concerned. With Travis dead and gone, Erickson says Fear the Walking Dead will now focus on how his death impacts the people he’s left behind.

“Thematically, we saw Travis make a turn at the end of last season,” he says. “He was more or less consumed by the apocalypse and tapped into this more violent warrior state. You have a situation where Alicia murdered somebody to protect him, and within two or three days, he’s gone. He’s dead. That throws her. I think Nick is really scrambled by it, because in his mind, the reason Travis is dead is they came looking for him again. And Madison is driven to a still darker place. For her, having lost the moral compass in their family — and of the show, really — I think it’s time to double down and make even larger moral compromises in order to protect her family.”

“That’s what I’m fundamentally interested in: the moral compromises this family is willing to make, and how they suffer for it, and hopefully how they can emerge from it with a modicum of hope by the end of the season,” Erickson continues. “But for me, it’s coming back to the fundamental relationships we established in the pilot between Madison and her kids. And then seeing Alicia and Nick continue to define themselves and emerge from the family structure a little bit and find their own identities.”

As for the mechanics of how Travis died, Erickson promises it wasn’t a random act of violence: “We’ll find out where those bullets came from as we get deeper into the season.” The answer to that question is coming down the line, but Erickson promises the impact of Travis’ death will make itself known all season long.

“Just when you think you’ve finally arrived and you’ve saved somebody and you protected your family, something comes out of the woods to take you back down,” he says of what the death represents. “From an emotional standpoint, it does leave a mark on Madison and on Nick and on Alicia. That’s what’s important, ultimately. Whenever a character is going to die, you need to make sure or at least attempt to make sure that it leaves an imprint and it hits the people who surround him or her in a profound way. Liza’s death did that for Chris, Chris’ death did that for Travis, and I think Travis’ death is going to resonate throughout the rest of the season. Consciously or subconsciously, it drives everything that Madison, Alicia and Nick do next.” 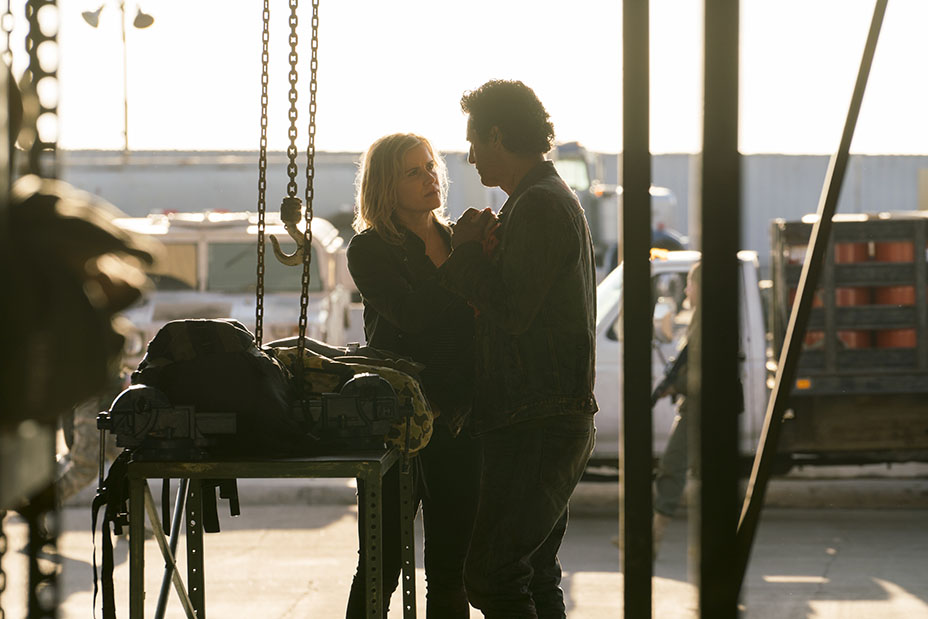 What are your thoughts on the shocking Fear the Walking Dead premiere? Who do you think killed Travis? Weigh in with your theories in the comments below.