[This story contains spoilers through the first two seasons of AMC’s Fear the Walking Dead.]

Dave Erickson’s final walk with the dead is nearly at hand.

The man who co-created AMC’s Fear the Walking Dead is set to leave behind the apocalyptic family drama at the end of the upcoming third season, bowing June 4. For now, he’s still knee deep in guts and gore. Speaking with The Hollywood Reporter about his looming departure, Erickson reveals that writing on season three is now complete, with production currently targeting a mid-July end date.

“The work we’re doing this season is the best we’ve done,” says Erickson, who will remain in the AMC family through a multiyear development deal. “Creatively, it’s an interesting place to be. We’re setting things up to hand off to someone else. I’m curious to see what direction it’s taken in. It’s really about wrapping things up and servicing the core Clark family story and coming up with some sort of transition, which feels like we’re getting a degree of closure but also opening up a new door.”

'Fear the Walking Dead' Showrunner to Exit After Season 3

Erickson’s departure from Fear the Walking Dead was announced months ahead of the season three premiere and has been in the works for quite some time. “It’s something that’s been on my mind for a time,” he says. “When you’re running a show, inevitably it’s all-consuming. Frankly, you end up not spending as much time with your kids as you would like. You sacrifice quite a bit to keep all of these balls up in the air. I’m looking forward to having time to reflect and spend time with everybody in my life and think about what’s the next thing to do. We wrap in July, but I’m still delivering and won’t be done until August or September. I’m looking forward to September and October as a time where I can refill the well a little bit and make plans for the next thing.”

Whatever the next project entails, it won’t involve zombies. Although Erickson will remain aboard Fear the Walking Dead as an executive producer, he says he has not had any conversations with incoming showrunners Andrew Chambliss and Ian Goldberg, nor has he discussed the series with Scott M. Gimple, the flagship Walking Dead showrunner who is set to join Fear as an executive producer with its fourth season. Indeed, Erickson does not imagine that he will have much involvement at all with the series moving past season three.

“I think a clean break is best,” he says. “Different showrunners, as they come in, will have to put their mark on the show and develop it and shift it toward whatever it is AMC and [Walking Dead creator Robert Kirkman] and company are thinking. For me, my job is to continue telling the story we’ve been telling and finish it as best as I can, in terms of closing one chapter and letting them open up the next. My intention is to downshift and focus on other things.”

This is far from the first time the Walking Dead franchise has experienced a showrunner shake-up. Frank Darabont, who adapted the comic series for television, was famously dismissed from the original series ahead of season two. His successor, Glen Mazzara, parted ways with the show following season three, paving the way for Gimple to step in as showrunner, a position he’s held since season four. Erickson’s departure from Fear marks the third showrunner change in the Walking Dead universe, which leads to the question: Is there something unique to the zombie franchise that makes it a challenge to manage?

“There are a lot of things that are challenging about it,” Erickson answers with a big laugh. “It’s a massive franchise. It’s incredibly important to the network, clearly. And there’s a huge existing fan base that you need to be aware of and cognizant of. I think there’s a lot of demands and pressure. It’s a tricky soup to get just right. I can’t speak for Frank or Glen’s situation, and obviously Scott has been doing an incredible job since he took over. I’m curious and excited to see how it develops once it gets into season four. Having not discussed it, I’m sure Scott and company have very specific plans. I think it will be an exciting thing for the franchise. Running any show is challenging. But to do something that’s under the microscope as much as Fear has been, and as much as the franchise has been, especially in the last couple of years? I think that’s a challenge.”

Erickson co-created Fear the Walking Dead alongside Kirkman, the comic book author who originated the zombie franchise alongside artist Tony Moore, with Charlie Adlard taking over art duties from The Walking Dead #7 and onward. When asked about his collaboration with Kirkman on the series at large and this final season in particular, Erickson says: “It’s pretty much the same as it’s always been: Robert, ultimately, it’s his universe; we’re just living and working in it.”

“You don’t see Robert coming into the room on a daily basis, because he’s managing an empire,” he continues. “It’s really more about checking in on plots and scripts as they come in. One of the nice things about working and collaborating with him is that he’s quite generous creatively. He lets you run and explore. It’s one of the reasons he’s been successful.” 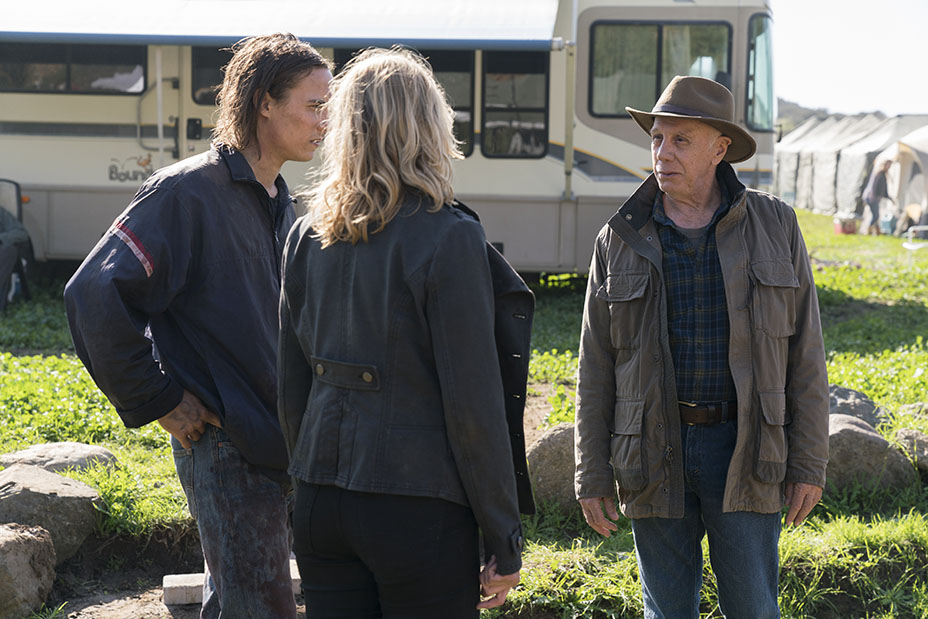 As for what to expect in his final season, Erickson paints a dark and politically charged picture. When the series last went off the air, Madison Clark (Kim Dickens) and daughter Alicia (Alycia Debnam Carey) had reunited with veritable husband and step-father Travis Manawa (Cliff Curtis), a man overwhelmed with rage and grief in the wake of his son’s death. Meanwhile, Madison’s son Nick (Frank Dillane) and girlfriend Luciana (Danay Garcia) were surrounded by armed gunmen at the U.S.-Mexico border. Even farther up the road, Ofelia Salazar (Mercedes Mason) ran into a mysterious figure played by new series regular Dayton Callie, with whom Erickson worked with on Sons of Anarchy. The showrunner reveals Callie will be playing a man named Jeremiah Otto, who is the leader of a community of survivalists who were already well prepared for the apocalypse before it hit.

'Fear the Walking Dead': Who Died in the Season 2 Finale?

Season three will serve as a reunion of sorts for Deadwood favorites Callie and Dickens, who played confidants Charlie Utter and Joanie Stubbs on the HBO Western. The actors are set to share several scenes together in season three, as Madison must come to grips with Otto’s often brutal tactics as he rules along the border. Indeed, Erickson warns that this story will have particular political resonance given that “we’re living in the wake of an election.”

“There was always going to be a certain topicality to this season, because it was always intended to be the border season,” he says. “That plan predates President Trump. But now, in the wake of the election, it resonates and echoes a little bit more. Fundamentally, the question for Madison this season is what happens if you align yourself with somebody you know has reprehensible traits. We’ll come to learn with Otto that even though there seems to be a benevolence to him at times, there’s a darker and uglier side to him as well, and it’s frankly racist. I think Madison will have to rationalize that. But I don’t think you can cast your ballots focusing on one specific topic and one part of your agenda, and ignore the racism and misogyny and xenophobia that goes along with that. I think that’s part of what the family has to wrestle with this season. They’re going to find a modicum of sanctuary and security, but it’s going to come at a great price. They’re going to have to get somewhat dirty before they have a chance to clean themselves off.”

Some of them won’t have the chance to clean themselves off, however. The previous two seasons of Fear the Walking Dead have featured the deaths of series regulars, and season three looks to amp things up in that regard. Erickson warns that one particular casualty will cast a shadow over his final run on the series, making his mission statement abundantly clear: “Anybody can go at any time.” For Erickson, the time to go is nigh.

The third season of Fear the Walking Dead premieres June 4 on AMC with two all-new episodes. Let us know your expectations for the season in the comments below.