[This story contains spoilers for the season four finale of AMC’s Fear the Walking Dead, “…I Lose Myself.”]

For Morgan Jones (Lennie James), the Aikido disciple who crossed over from The Walking Dead into Fear the Walking Dead territory at the outset of season four, the story ended as it began — at least in a manner of speaking.

Sunday’s finale focused heavily on Morgan and his pursuit to help the menacing Martha, the so-called “filthy woman” played by Tonya Pinkins. So much for that. Martha wound up besting Morgan, if only briefly, skewering his leg and keeping him from helping his friends in need — friends who Martha managed to poison with antifreeze. Eventually opting to neither kill nor save Martha, Morgan broke free from her clutches, returned to Alicia (Alycia Debnam-Carey) and the rest of the gang and hooked them up with a truck filled with beer brewed by the late Jim (Aaron Stanford).

“You can, in fact, chug beer as a cure,” co-showrunner Andrew Chambliss tells The Hollywood Reporter about the finale’s unusual ticking-time-bomb situation. “You just need to drink a lot of it, or drink beer with a high enough alcohol content to counteract the antifreeze.”

Unfortunately, copious amounts of alcohol can’t cure the zombie apocalypse. Fortunately, Morgan offers up another possible panacea: hope. The Walking Dead alum tells his new friends that he no longer wants to return to Alexandria, dashing plans for any further crossovers, at least in the near future. Instead, he plans to help as many survivors in the nearby area as he can, so they don’t wind up like Martha (who eventually died and zombified from wounds sustained earlier in the season), or worse. The season ends with Morgan and the rest setting up shop at a factory, arming themselves with new trucks and supplies, and roaring off into the wild as an end-of-the-world rescue crew.

While he began his time on Fear the Walking Dead as a loner looking to avoid people, Morgan arrived at a full-circle moment at the end of the season, complete with imagery meant to call back to his first appearance in the Fear side of the AMC zombie universe. According to Chambliss and his fellow showrunner Ian Goldberg, Morgan and his friends’ desire to help people will form the spine of season five. Here’s what the Fear bosses tell THR about how they came up with their ending for season four, what to expect from season five, an update on how far along they are in the planning and production stages and how a certain figure from Fear seasons past is fixing for a comeback.

'Fear the Walking Dead' Bosses Forecast the Storms Ahead

How did you settle on the ending for season four?

Andrew Chambliss: The idea for where we wanted to end all of these characters, we had it at the beginning of the season. We knew we were telling a story about them going from a dark and hopeless place to a place of hope. More than that, we wanted to get them to a place where they could spread that philosophy and that idea. They wanted to make up for all of the bad things they did. They wanted to have a mission that would allow them to achieve their redemption. The final moments of the episode, where they’re driving out into the world to find other people who were like them at the beginning of the season — in need of help, both physical and emotional — that was something we had from the very beginning. The details surrounding that were what we worked on as we developed the season.

There’s a full-circle quality to the episode: Morgan traveling toward a person rather than away from people, and Morgan suffering a leg injury, as two examples. What did you feel you needed to accomplish, in terms of closing loops?

Ian Goldberg: As it relates to Morgan, that’s absolutely right. In many ways, we were returning to the themes and images we started with Morgan in [the season premiere]. The biggest one was in his first interview with Al, when he told her, “I lose people, and then I lose myself.” We really wanted Morgan to confront that head-on in this episode. The way we had him confront that was through Martha. She’s someone whom Morgan had come to know and has seen a lot of himself in. He’s told her, “You’re stuck.” He understands what it’s like to be stuck in a place of trauma, after the loss of his wife and his son and all of the people closest to him. But it’s this episode where he realizes he’s still stuck. Martha knows that. This episode is about Morgan exorcising that particular demon. When he washes the “I lose people, I lose myself” writing off of his face, we talked about that as the rebirth of Morgan. He’s finally able to shake off the damage and trauma. He’s no longer stuck. The reason he can do that is because of this unlikely family that’s come together over the course of the season.

Season four ends with Morgan and the gang deciding to ditch the Alexandria plan. Is that on the back burner for good, in your mind? Do you see them still trying to make some kind of contact with the folks at Alexandria?

Chambliss: I think what’s at the forefront of their mind is helping people in their immediate proximity. In Morgan’s mind, and the other characters’ minds, from everything they have heard about Alexandria, he’s pretty well assured they have things handled. But this area of the country Morgan is in right now is a lot rougher in many ways. They haven’t come across as many people and as many settlements. It’s really about helping the lone survivors they can find out there, because so many have been on their own. Martha is the ultimate extreme of what happens when there’s no one to turn to for help. It’s a way of making this corner of the world better, and preventing those people from going down the dark path Martha went down. 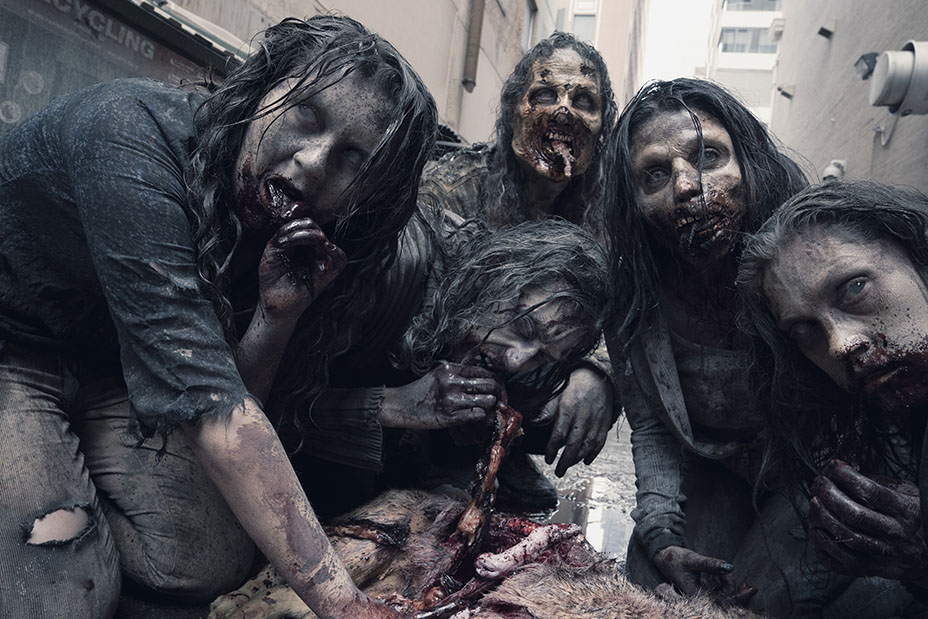 What’s your vision for season five, based on where we leave these characters?

Goldberg: When we started this season, we wanted it to be about hope. That was the emotional through line for everyone: starting in a place of helplessness and getting toward hope. This season has been about not just emotionally coming to believe that, but also making hope part of their mission and their reason to exist in this part of the world. It’s a shared mission statement they’re all galvanized behind. It’s going to continue in season five. It’s not going to be easy for them. As Strand [Colman Domingo] says, “Where are we going to find these people? They’re in short supply.” Their efforts to help might not always go smoothly, but they’re all united behind the shared mission. That’s the canvas we’re playing with in season five. There will be more introspection and looking inward for these characters. They will see that even though they have found a noble mission in helping the people of this world, the next step of their mission is learning how to live. What do we do beyond our mission? What do we do beyond survival? How do we live our lives in this world?

How far are you into the process of building out season five?

Chambliss: We just pitched the first half of the season yesterday. We’re already underway writing the first few episodes. We’re pretty far down the line and getting excited about what we’re doing. As Ian said, it’s about continuing the mission we saw them set out on at the end of [the finale], but also encountering a lot of bumps along the way — some expected, and some unexpected.

Will Mo Collins and Daryl “Chill” Mitchell return for season five as Sarah and Wendell?

Goldberg: Yes. We love Mo and Chill. We love what they’ve brought to the show, just in terms of the way they portray these characters: the humor, the heart, the soul. They will absolutely be back.

Do you anticipate any issues with scheduling Chill around NCIS: New Orleans? Was that at all an issue in this past season?

Chambliss: Because Wendell didn’t appear until the back half of the season, the way our schedules aligned with NCIS: New Orleans actually worked out fairly well. There was only one episode of production for NCIS and for us that overlapped. We’re very grateful for the producers of NCIS: New Orleans. They’ve really helped us out in scheduling so Chill could play Wendell. As soon as we saw him read for the role, we knew he was the person we wanted. We’re very happy it worked out, and we’re looking forward to continuing that relationship.

'Fear the Walking Dead' Season 4 Teases Villains Beyond the Storm

Where will production take place for season five? Are you staying in Texas?

Goldberg: We are. We’ll be in Austin again. We had a really great time filming there in season four. We felt we got a lot of variety in terms of what the city had to offer. We’re going to explore new sections of the city and the outskirts that maybe we didn’t see in season four.

As far as what we didn’t see in season four: Daniel Salazar (Ruben Blades), whose fate in the Walking Dead universe remains unknown. Will he return in season five?

Chambliss: We don’t want to give anything away, but we’ve said it before and we’ll keep saying it: Daniel Salazar is out there. He’s alive, and he will be popping up again in the Walking Dead universe.

Season four focused on building new bonds between this new cast. Will there be a time jump between seasons four and five, so the relationships are deeper when we see them next?

Goldberg: The thing that’s excited us so much after working on season four, and what we want to continue carrying forward to give Fear its own identity, is largely a tonal thing for us: we want it to be a show about hope. We want to paint with a lot of different emotional colors. This season, it was very important to us to have humor in the show and to play a love story at the center of it. We wanted to find a way to have it be a very positive and hopeful show about what’s often a bleak world. We relish in being able to be a bit experimental and weird, to do episodes back-to-back like 410, where Alicia and Charlie were in a very dark place in the house, and then 411, where Morgan could go on a very bizarre road trip with two truckers and a surly brewer.

What did you think of the Fear finale, and what are your expectations for season five? Sound off in the comments below, and stay tuned to THR.com/WalkingDead as season nine of the flagship prepares to launch.