[This story contains spoilers for season four, episode 11 of AMC’s Fear the Walking Dead, “The Code.”]

The world of Fear the Walking Dead just got a whole lot bigger — and a whole lot weirder.

First teased in the Comic-Con trailer for the second half of season four, several new castmembers have finally arrived on the Fear the Walking Dead scene: Mo Collins as Sarah, Daryl Mitchell as Wendell, Aaron Stanford as Jim (and don’t you dare call him “Jimbo”), and Tonya Pinkins as… well, it’s not clear who Tonya Pinkins is playing quite yet, but she’s somebody who fits the description of how showrunners Andrew Chambliss and Ian Goldberg have described the villain looming over the next several episodes.

Over the course of “The Code,” viewers watch as Morgan Jones (Lennie James) weathers the current storm, hiding out and falling asleep in the back of a truck bound for Mississippi. When he wakes up, he winds up at a gas station that’s filled with healthy amount of supplies, not to mention working water. (Your mileage may vary, but from this writer’s vantage point, Morgan taking time to sit down and enjoy the comfort of a functional toilet stands out as one of the most satisfying and downright human scenes in the entire Walking Dead franchise.) During his bathroom break, Morgan encounters Sarah and Wendell, who initially present themselves as rough-and-tough do-gooders dedicating their lives in the apocalypse to supplying those in less fortunate circumstances.

'Fear the Walking Dead' Season 4B Trailer Storms Into Comic-Con

Eventually, it becomes clear that the lanky trucker and her wheelchair-bound accomplice aren’t as altruistic as they appear at first glance. Morgan finds this out the hard way after he encounters a brewmaster named Jim (Stanford), and soon learns that Sarah and Wendell are grifters who were trying to kidnap Jim and steal his booze supply. The development disgusts Morgan, especially when Jim winds up taking Sarah and Wendell’s side, with the three strangers desperate for Morgan to direct them toward the fabled Alexandria Safe-Zone of the Walking Dead proper. Some zombie shenanigans ensue, as is the Walking Dead franchise’s wont, and Morgan is able to convince his three new reluctant allies to stop being so self-centered, join him in a journey back to where he last left Alicia (Alycia Debnam-Carey) and his other friends, all while stopping along the road to leave behind supplies for any strangers who might be in need.

It’s in the journey home that the final new character of the episode makes herself known: Tonya Pinkins’ mysterious stranger, who is listening to Morgan monologuing over the radio. As it turns out, this woman has a walker pinned to a wall in some unknown storage facility. She scrawls some familiar words onto his face in marker: “Take what you need, leave what you don’t.” The same eight words have come to define Morgan and his mission, and the arrival of this new menacing figure makes one wonder about their origin.

'Fear the Walking Dead' Bosses Forecast the Storms Ahead

“The storm is the thing that makes the world a lot harder to live in, but there will be someone cropping up who is going to really test all our characters in ways that they didn’t expect,” co-showrunner Andrew Chambliss previously told The Hollywood Reporter, adding, “and this antagonist — I don’t want to give away too much about who this person is — may know a lot more about our characters, or have insight into who they are and what they’re going through in ways that our characters don’t even have.”

Chambliss’ remarks are certainly echoed in what little we know about Pinkins’ character thus far, as she’s seen listening in on Morgan’s conversations, with multiple radios at her disposal. There’s reason to believe she will run into Morgan directly at some point in the near future as well. In the Comic-Con trailer, Morgan is seen at one point with words scrawled across his forehead in marker: “I lose people, I lose myself.” The future markings on Morgan’s face certainly line up with the limited details we currently have about this new stranger.

But should we assume that Pinkins’ enigmatic character is the main villain of the second half of season four? Not necessarily. When pushed on whether or not the mysterious villain would be a brand new character or someone familiar, co-showrunner Ian Goldberg was coy: “It could be either. We can promise you this person or persons will show up in the back half of the season.”

Who from the Fear the Walking Dead cast’s past could show up at this point in the series? After all, just about every person Alicia and friends have encountered over the seasons is dead at this point, right? Well, not exactly. There’s one person whose fate remains unconfirmed… 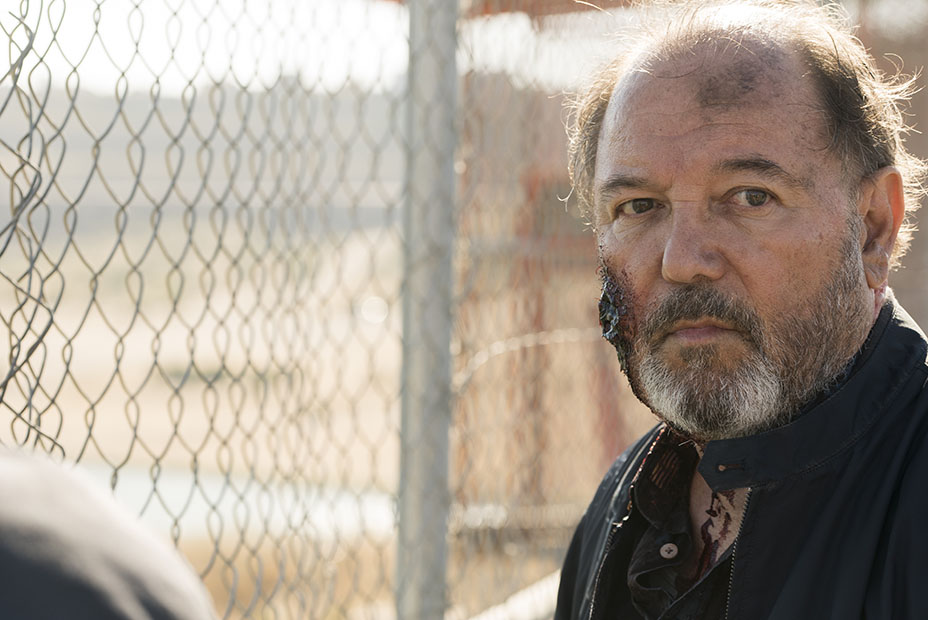 …Daniel Salazar, played by Ruben Blades. Outside of Alicia and Strand (Colman Domingo), Salazar is the only main character from the first season who might still be alive; he was last seen in season three nursing a gunshot wound to the face, trying to save Nick (Frank Dillane) from doom in the wake of the Gonzalez Dam’s destruction.

Before season four debuted, representatives for Fear the Walking Dead confirmed to THR that Salazar was alive and that Blades would appear on the show again, albeit not as a series regular. That promise remains unfulfilled eleven episodes later. With only five episodes remaining, the odds of a Salazar sighting — potentially as an antagonist, working alongside Tonya Pinkins’ character — have never been higher.

What do you make of the new Fear the Walking Dead characters, and what are your theories about the new antagonist? Do you expect to see Salazar again before long? Sound off in the comments and keep checking THR.com/FearTheWalkingDead for more.