[This story contains spoilers for the season five finale of AMC’s Fear the Walking Dead, “End of the Line.”]

Morgan Jones (Lennie James) is dead — at least, it looks that way. Official comments from Fear the Walking Dead showrunners Andrew Chambliss and Ian Goldberg leave the door wide open for Morgan’s continued survival, however improbable, given the bullet wound and the walkers closing in.

Whatever happens to Morgan next, the veteran Walking Dead hero can at least take some comfort knowing there’s still new life in the world of the dead. Case in point: Karen David as Grace, the nuclear power plant worker who spent her entire debut season sick, suffering from apparent radiation poisoning. As it turns out, Grace wasn’t on the verge of death after all. Quite the opposite, in fact: she’s pregnant. Morgan learns the news just a few short moments before Colby Minifie’s Virginia leaves him for dead with harsh parting words: “I just resent your face so much.” Rude!

For her part, Grace does not resent Morgan’s face. She will miss it very much in the time ahead that they are apart — whether it’s forever, or only for now. In either case, for more on what’s next for the series as well as what’s next for Grace specifically, The Hollywood Reporter sat down with Karen David for a closer look at her character and the plot twists of the season finale. 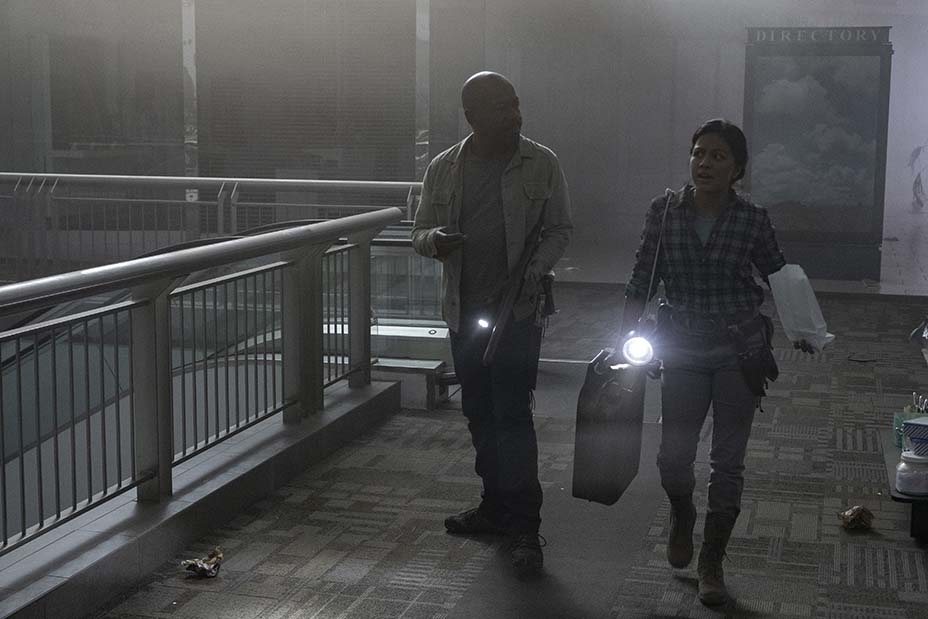 Congratulations to Grace on her pregnancy! Such fantastic news in the midst of a bleak finale.

Thank you! (Laughs.) I’d like to think it’s fantastic news. I’m sure under normal circumstances, Grace would be ecstatic and elated. But I’m sure she, like me, has a million questions running in her head. It would have been the biggest shock for her. When Ian and Andrew first told me about where the storyline was going, and they dropped the pregnancy reveal at the end of the conversation, I was so excited. I never in a million years would have see it coming, and I don’t think Grace would have, either. I really felt like I was in her shoes. There are millions of questions running through her head. She has radiation [sickness], there’s now more pressure about how she’s trying to move forward and live beyond today. If anything catapults that, it’s this pregnancy. She’s now responsible for another life. She’s going to be asking: “Is the baby healthy? Is the baby okay? Will the baby be impacted by the radiation? Will she carry to full term?” The main question: will Grace live to see her baby’s first birthday, and each of the years that go by? A lot of things are weighing heavily on her.

In your mind, the reveal of Grace’s pregnancy and how it contextualizes some of her sickness throughout the season — you don’t think this means she’s in the clear, ultimately? You’re still concerned about her long-term prospects from the radiation exposure?

It’s definitely still a risk. Grace was exposed to high amounts of radiation back at the nuclear plant. There’s no way of avoiding that. It’s just a question about how now, the stakes have risen, big time. We know she’s been malnourished. When the doctor radioed into Ginny and said, “[Grace] isn’t sick, she’s pregnant,” it’s more a question about how her symptoms from the radiation exposure have not surfaced yet. As far as the doctor can see, she’s pregnant. So, let’s see. We don’t know how much radiation. She’s been exposed to a lot. There’s only so much a hazmat suit can do to protect. Only time will tell.

Grace and Morgan confess their feelings for one another before they are torn apart — moments before Morgan is literally torn apart by walkers, depending on what’s next. What was your reaction to the final note of the season?

It was such a bittersweet feeling. I feel the whole episode was so bittersweet. There are pairings and unions between couples and friendships, only for them to be broken off and sent away to what I feel are glorified concentration camps. It’s quite haunting. If ever there was a time to live and to keep moving forward, I think that was very much reflected in the episode. I love that everyone collectively as a group decided they weren’t going to be guided by someone whose beliefs don’t fit with theirs. They do not believe in what Ginny believes in. They basically threw up the middle finger at her: “You can come and tear us apart, but we’re going to continue doing what we do.” I love that we went ahead with the June (Jenna Elfman) and John (Garret Dillahunt) wedding. I love that it put things in perspective. I love how Morgan and Grace finally had this moment together. I guess that’s what the apocalypse does to you: it eventually brings out the truth, because you don’t know what will happen tomorrow. They started living for the moment.

I remember filming that scene and looking at Lennie, who is just so wonderful. His acting is so breathtaking. I feel really honored to work with an actor like him. We were both tearing up in that moment. I could sense between both of us that it was a feeling of release, that they could get these feelings out. There was joy, and then a bittersweetness, that they were going to be ripped apart momentarily. Time was not on their side. She doesn’t know if she’ll ever see Morgan again. She even tells Morgan earlier: “We won’t see each other again.” It’s quite haunting. But it’s very satisfying to me as an actor, that these two characters who a lot of fans have enjoyed seeing together finally got their moment. I saw a lot of people on social media saying, “Finally! Thank you!”

Did 'Fear the Walking Dead' Just Kill One of the Franchise's Most Important Characters?

Meanwhile, you’re on the other side of the computer saying, “Oh, well, just wait. Give it five more minutes — because things are about to get worse.”

Right. (Laughs.) But he listened to Daniel Salazar (Ruben Blades) and finally said it! It was a joyful moment! I know how much it took for Morgan to drum up that courage to express his feelings for Grace. It’s been a long time since he was able to do that, after mourning [his deceased wife and son] Jenny and Duane. I can’t imagine how a character like Morgan has to cope with such immense loss, and find a way to learn to live with that. Knowing his journey and coming to that moment was exhilarating to watch — but yeah, I did have to bite my tongue after that, because I knew it was about to change drastically.

Just as she was leaving, she turned around and was pretty adamant in telling Morgan: “You need to know that.” It was before the revelation of the pregnancy, and so at that point, she had come to terms with the fact that her clock was ticking and time was not on her side. She’s going to die. She truly feels that this is it. When she looks at Morgan, it’s with some finality. She’s made peace with her situation, she’s told Morgan how she feels, probably won’t see him again. She can walk away, with him knowing how she felt.

I would imagine now — and these are guesses I’m throwing out — that now that she’s pregnant, all she wants is to go and tell Morgan, to make sure he hears this news from her and nobody else. She doesn’t know how he’s going to react. They just started what she hopes will be something meaningful, relationship-wise, and now we’re throwing her pregnancy into the equation and what that represents to the group as a symbol of hope. But it’s still a baby — someone else’s baby! But maybe this is Morgan’s chance at gaining a family again.

But we may never know now, because he’s at death’s door, surrounded by all these walkers. He’s been shot. He’s bleeding badly. It’s not looking good. (Laughs.) It was very hard to watch that scene. When Morgan drags himself along the rocks… I found it so difficult to watch. When Ginny points her gun at Morgan and says, “I just really resent your face so much.” Colbie is such a brilliant actress; you could really feel the resentment there. I think that would have really broken Grace, like any of us. It hurts my heart a lot, that she has no idea what’s just happened to Morgan.

Do you have any theories about how Morgan will survive? If you were in charge of the storyline, how does he escape his current situation?

There’s the whimsical answer and the non-whimsical one. (Laughs.) I’d like to think [Salazar’s cat] Skidmark got out of his crate and came up to Morgan, and distracted all of the walkers. Skidmark obviously scuttles away safely, but they all follow him, and guides them to somewhere else so Morgan is absolutely fine.

Hold on one moment, I have to call Andrew and Ian and tell them that they have been replaced.

Right? (Laughs.) We have all grown to love Skidmark. He’s our mascot of the apocalypse. If there’s ever a time for your beloved mascot to become the true hero of the hour, it’s now! Other than that, I think there’s something about Strand (Colman Domingo). What’s he up to? He’s always thinking ten steps ahead, assessing the situation. Nothing seems to faze him. He’s probably asking, “Where is Ginny coming from? Why is she doing the things she’s doing?” I wonder if Strand has something up his sleeve, and he’s able to come back for Morgan. My gut feeling says there’s something about Strand.

'Fear the Walking Dead' Renewed for Season 6 at AMC