Amazon’s Forever, from creators Alan Yang (Master of None) and Matt Hubbard (30 Rock) is an exercise in the concepts of marriage and commitment. But, no offense to series stars and exec producers Maya Rudolph and Fred Armisen, it isn’t their wedded characters, June and Oscar, who offer the best example of devotion and eternal longing. That credit actually goes to two characters who only appear in one episode.

Through a fully contained story in the freshman dramedy’s sixth episode, viewers meet Andre and Sarah. Played by The Chi’s Jason Mitchell and Downsizing’s Hong Chau, these are two Riverside, California realtors who find a special spark early on in their house-selling careers, but whose paths send them into the arms of different partners so that their commitment to one another never becomes legally binding. During the course of the episode, viewers see their relationship evolve and dissolve, climaxing in an extremely heart-breaking finale where an older Andre learns Sarah has died without his knowledge. She takes with her his dreams of rekindling the romance he never forgot and leaves behind the eternal sliding doors of “what-ifs” and ulcer-inducing missed opportunities — sentiments that echo what Rudolph’s June is also going through at this point in the series.

Below, Yang, Hubbard and Mitchell talk with The Hollywood Reporter about how the episode came together. (Chau was unavailable to participate.)

Lots of shows do bottle episodes. But one with nearly all new characters? In the first season?

Yang, who also directed the episode, says he doesn’t think there’s anything harder to do on TV than a pilot. In this case, “we kind of gave ourselves another pilot to do” in season one because “it’s almost like a little play in the middle of the season,” where “you’re writing the story of an entire relationship over the course of decades crammed into 30 minutes and crammed into a track home in Riverside.”

He explains that “you have to establish two characters’ personalities, establish the reason they’re attracted to each other, establish their entire relationship and then take them through their own trials and tribulations, put up obstacles for them [and] also try to make it funny, try to make it interesting, try to make it observationally relevant and try to make it dramatic.” Because of all of these hurdles, he says that this script was “harder than just another episode where you have an A, B and C story. You’re working with new actors and it was truly a series of challenges.”

Hubbard adds that the stress was worth it because it helps get the audience’s attention. “You can do these unusual things and it helps [to take] risks,” Hubbard says of the current TV landscape, reminding that “we kind of fake people out in episode three” of Forever by briefly introducing new characters. “In this episode, I think people might think it’s that again and, in this episode, it just doesn’t end,” he says.

Yang says the episode was inspired by the “realism and the dialogue and the naturalism” of films by the likes of Richard Linklater and Éric Rohmer.

“It was a tough one because you want to be more realistic than the rest of the show is and still have a bit of humor and tragedy and a little bit of observations about relationships,” says Yang, who stresses that several people collaborated on the episode, even if he and 30 Rock alum Colleen McGuinness are ultimately the ones who got the byline. “I like the passage of time and writing about that and writing about regret and loss. Hopefully, all of that got crammed in there in an interesting way.” 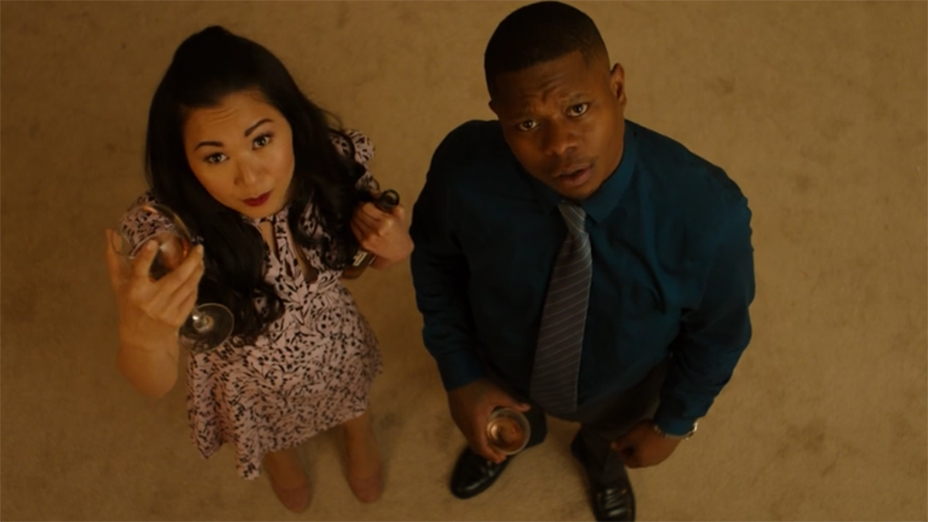 Yang did feel a particular resonance to the setting.

“When I walked into that location that we found, it felt like my [childhood] house,” he says, crediting location manager Manny Padilla and production designer Amy Williams for pulling this off. “I grew up in Riverside, so some of the carpeted stairs and some of the fixtures felt like some of the houses that I’ve lived in.”

There is no hidden meaning by making the characters realtors.

Realtors do move in and out of people’s personal spaces and therefore also may see things that are not immediately obvious to others — kind of in the same way that June and Oscar can do at this point in Forever.

But Yang says it was a “pragmatic” decision to give these characters these jobs, even if their sound mixer did think Mitchell’s Andre was meant to be God. He says they simply “wanted them to be in this empty house and have it change over time and have it be a central location that they could keep going back to and/or run into each other.”

The creators also liked that they had an interracial cast with a twist: Two people of color who meet and fall in love even though they will eventually be espoused to white people.

Yang says that “it gave us some material to work with in terms of the specificity of their lives.”

“It’s the kind of couples you don’t see very much, especially in this kind of [story],” he says, referencing films like Linklater’s Before trilogy that stars Ethan Hawke and Julie Delpy — movies, he points out, where it’s “mostly white people talking — which is OK, but we can do that with all kinds of people now. All kinds of people can be charming and sexy and have tons of conversations together.”

This, however, did not stop the characters from taking digs at white people.

“I just thought it was really cool because inside conversations are always hilarious,” Mitchell says, explaining that that kind of bonding and frankness is not something you normally see on screen.

Yang elaborates to say that these scenes allow “you [to] understand how these people can be together in a different way and get something from each other that they’re not getting elsewhere. They’ve both been underdogs and part of that is from their background and their race and where they grew up.”

The show’s premise is famously shrouded in secrecy — even to guest stars Mitchell and Chau.

Mitchell says that the creators told him that “we can’t really talk about too much, but your episode is going to be different and there’s a lot of love and stuff like that,” so “I went into it really blind.”

The stars also didn’t get a ton of prep time to perfect that intimacy.

Mitchell says, “I actually compare it to the first day of school,” but they got lucky and things just clicked. Maybe it was a subconscious connection? Mitchell says neither he nor Chau put it together that they both grew up in New Orleans until the end of shooting.

“It’s a pleasure to work with somebody like that,” he says of his co-star’s professionalism.

The last scene in the episode was actually the first one filmed.

Mitchell says he found this handy because he could watch actor Jesse D. Goins, who plays his older self, in what he calls a study in “reverse psychology of myself.”

“He was going to be capping the whole thing off, so we shot him first,” Mitchell says. “I could nail him down and basically be him. He was kind of my cheat sheet. Everything from his walk or the way he’d pat his leg; different small things. I was like this was really cool. This is the man I’d grow into.”

The episode ends in a makes-you-think downer. That’s deliberate even if it is depressing.

“One of the big reasons to do the episode in general was how it tied into the larger arc of the show,” Yang says. “In some ways, the Andre-Sarah relationship is the mirror of the Oscar-June relationship. In a certain way, Andre is the surrogate June character. When June sees the intense regret that Andre has, we wanted that to impact her and make people think about the path not taken; the choices we make and every decision we make has repercussions down the road.”

He says that “having Sarah pass away was sort of the strongest version and the way to produce the most intense regret.”

Even Mitchell was impacted by it.

“I’m a very opinionated person when it comes to relationships, marriage, and all these types of things,” he says. “I believe a lot of times people make decisions for those around them instead of themselves. I really think that this episode makes people think about that and the fact that you can have something that could be potentially beautiful in your life, but because of obligations or situations that may be in the way [that doesn’t happen].”

He adds that “love is such a taboo thing. It’s a crazy thing because even if it’s taboo, most people have a pretty good hold on it once they know that they love somebody. It’s just hard to hide from. It’s really cool.”

The show hasn’t received a second season order yet. If it does come back, will bottle episodes become part of its signature formula?

The creators say they’re open to it if Amazon is. They’re even happy to bring back Chau and Mitchell, if they’re game.

Forever is now streaming its entire first season on Amazon.