The biggest medical story of the century will be a thing of the past when Fox medical drama The Resident returns in January. Unlike the rest of television’s medical dramas, which premiered this fall and were set in the thick of the COVID-19 crisis, The Resident‘s fourth season is taking place in a post-COVID, post-vaccine world.

“You can’t ignore COVID, and nor did we want to. We wanted to tell the story of COVID, we wanted to honor all the front-line medical workers — of whom a bunch are our writing staff,” says Andrew Chapman, who started with The Resident in season one and was recently elevated to co-showrunner.

But with The Resident not returning until midseason, Chapman and the rest of the writers imagined that the world would likely be different than it was in June when the season four writers room returned to work.

“We thought that by the time we got on air — January, February, March of 2021 — not just the public but we as staff writers were going to be so underwater with COVID and COVID stories, and so sick of the pandemic and being locked down and the tragedy of it. We were trying to figure out a way that we can both honor the front-line workers and tell a story that’s compelling, so we made a sort of educated guess.”

'TV's Top 5': 'Grey's Anatomy' Boss on the Responsibility to Write About the Pandemic

The guess is that there would be a viable vaccine, and that it would be widely distributed as quickly as possible — which is true, though The Resident‘s timeline might be a tad accelerated. But still — a world in which most people will be vaccinated is hopefully a reality in 2021, and it doesn’t necessarily seem like some sort of science-fiction future.

The premiere episode, which was written by The Resident staff writer turned story editor Dr. Daniela Lamas and Harvard Medical School graduate Eric I. Lu, premieres Jan. 12 and will take place in the near future as Dr. Conrad Hawkins (Matt Czuchry) and nurse practitioner Nic Nevin (Emily VanCamp) are preparing to get married.

The episode will flash back to the worst of the pandemic, when the doctors and nurses of the fictional Chastain Park Memorial Hospital were inundated with COVID patients — including several of their own employees — before depicting the moment when Conrad and Nic finally walk down the aisle.

The Resident‘s decision to skip ahead in the pandemic is a stark contrast from other scripted shows. ABC veteran Grey’s Anatomy, for example, set its 17th season at the onset of the pandemic in April and currently has leading lady Meredith Grey (Ellen Pompeo) fighting for her life after testing positive for COVID-19. Only CBS’ Blue Bloods and now The Resident (so far) have made the decision to fast-forward and set their stories in a post-vaccine world. Other programs either decided to exist in a world without COVID or write the pandemic into their stories. The debate over doing so was one that weighed heavily on the minds of many writers in April and May when rooms were beginning to reunite and craft stories during the height of the production shutdown. 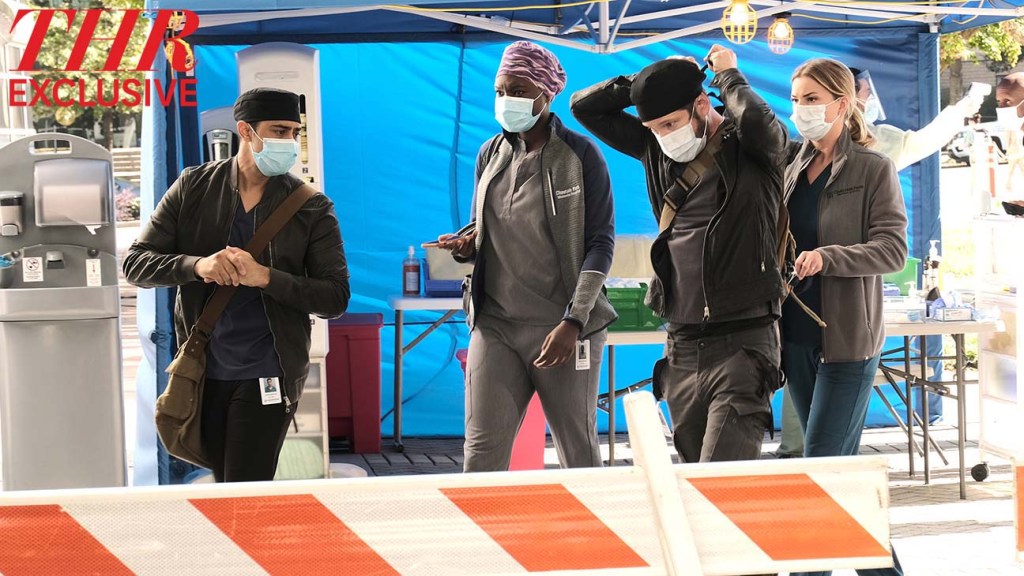 Lamas spent the third season of The Resident as both a staff writer on the show and a pulmonary and critical-care physician at Brigham and Women’s Hospital in Boston, jetting from Los Angeles back to Boston for shifts in the ICU. But for season four, she’s been Zooming in to the writers room during breaks from her work on the front line of the pandemic, where she’s been treating COVID patients since March.

She told THR that she included plenty of her real-life experiences in the episode, both larger plot points and smaller details, like how she and her colleagues would keep their iPhones in plastic bags to prevent contamination, and how they’d store their personal protective equipment in paper bags to prolong their usage.

All of those little ways they tried to keep themselves safe will make it into the show, as will the quieter moments, like “the way that even in the midst of these most stressful and tragic moments in the call room, you find yourself eating a piece of food or taking a sip of coffee and noting that you’re able to smell it, thinking, ‘all right, for now, today, I’m OK.'”

Lamas had just settled into her hiatus back in Boston when the pandemic hit, and she knew that although it would be difficult to continue to do both jobs when The Resident‘s room started up again, she wanted to try.

“I feel a strong responsibility to both worlds,” she said. Critical care doctors are essential to fighting the pandemic, but so is storytelling and making the public aware of what front-line medical workers are going through. “Having the opportunity to turn experiences and to turn these little stories that I have and aspects of individuals into fiction gives them some kind of immortality and different life.”

That, she says, has been “the most amazing antidote to burnout that I can imagine. On a purely personal level that’s been a huge gift and that’s really, really important. I think a lot of health care workers are watching medical television right now, actually. I talked to the nurses about the shows that have come out and there is something strangely cathartic about watching that, about watching these characters that you know go through what you’re experiencing, even if it is not perfectly accurate, and then move beyond it into some world that you can imagine getting back to some kind of normal.”

That said, the new normal looks very different — and is still deeply affected by COVID. Although the premiere ends on a high note with Nic and Conrad tying the knot, there will be more COVID stories to come. 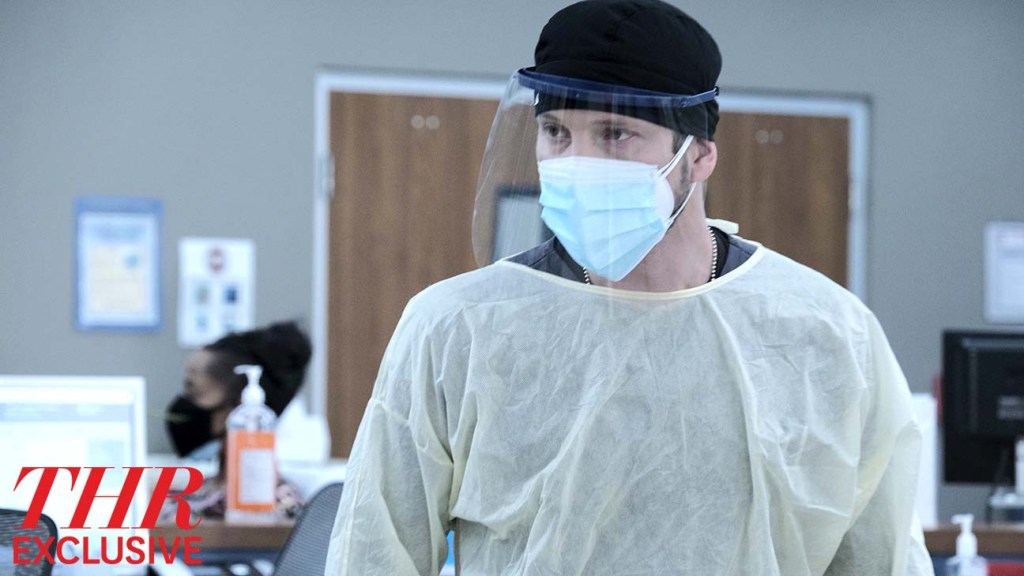 “We really wanted to end that premiere on a hopeful note and move forward into the future with promise,” Chapman said. “We just felt like, ‘Oh my God, this is so awful.’ This pandemic is so heavy and tragic and we just wanted to give people hope. We just wanted to give people a sense that there was going to be a medical show after COVID, we were still going to save people’s lives and still be heroic. With the episodes following, we are set in a vaccinated world. We’re still going to deal with the ramifications of COVID. We’re still going to have people who got sick from COVID and they’re long-haulers, or they had surgery that they shouldn’t have had during the pandemic and they got sick, or they won’t leave their house because they’re still terrified and they’re shut-ins.”

Another effect of COVID is the way the inequities of the American health care system were laid bare by the pandemic. In March, Lamas’ first COVID patients were all mostly affluent white people who had caught the virus on, say, luxurious European ski vacations. Weeks later, the demographic changed.

“We were taking care of room after room of intubated Black and brown, largely men, and this was an entirely different demographic than we started out [with],” said Lamas. “I was really shaken by that, and then of course shaken by the fact that I was shaken by that. Of course the people who could quarantine did, and of course any disease is going to be worse among people who do not necessarily have the same access to health care or the ability to quarantine and to stay away from work or from those they love.”

The pandemic has also taken a catastrophic economic toll on the entire country, and Chastain Park Memorial Hospital is not immune. The financial situation of the ritzy private hospital will completely change when it goes bankrupt in season four and turns into a public hospital with an entirely different demographic.

In setting the season after a vaccine, The Resident gets around the biggest challenge facing all shows about first responders — mask-wearing. To not show proper mask usage would be irresponsible, but the future setting avoids that altogether. There are still liberties taken, though — pretty much all medical professionals would agree that everyone will be wearing masks in hospitals for many years to come, so the fact that the Chastain doctors won’t when they’re treating non-COVID patients is probably a bit of fantasy.

Lamas has learned working on the show that there’s a fine line to tread between writing compelling television and maintaining medical veracity, and sometimes the television part wins out. But right now, messaging through fiction is especially important — which is why disclaimers about mask usage will air before each episode.

“In this setting, in the pandemic, that’s different,” she said, “because you’re modeling behavior and the mask issue is so tragically politicized that if you’re setting a television show in an ongoing pandemic and showing weird protocols around masks, that’s confusing to a public that we know is already really confused.”

Said Chapman, “We really don’t want to be irresponsible, so we have disclaimers. Obviously people will still wear masks in surgery, or if there’s a patient who’s highly contagious with something, or they don’t know what it is, then yeah, they immediately go to masks. But we felt like this was going to be a relief for our audience to be able to let go of that.”

Added Lamas, “I think it will allow our viewers something that we really need, to see our actors’ faces in this post-COVID world and to remind people that world will exist if we do the things we need to do — if we get vaccinated, if we’re careful until that time.”