When the 15-year-old ABC Family rebranded as Freeform in January, executives at the Disney-owned network touted the move as a way to shift its audience from parents with kids to more desirable millennials and teens — what Freeform execs called “becomers,” those 14-to-34-year-olds who are experiencing their first jobs and relationships (and, presumably, solidifying their buying habits). Now, nearly a year later, production wrapped Oct. 26 on the series finale of the network’s biggest hit, Pretty Little Liars (the finale airs in the spring), and no show has emerged to take its place. Worse, the linear ratings erosion that has hit all cable networks has pummeled Freeform even harder.

Without DVR or digital viewership, Freeform has dipped 16 percent this quarter — below the ad-supported cable average. Viacom has made headlines for the ratings struggles at its youth-targeted networks, but Freeform is down more than its Viacom-owned direct competitors MTV (7 percent) and Comedy Central (10 percent).

Of course, nonlinear viewership tells a different story. Freeform originals add an average 33 percent to their core demo haul during a 35-day window as viewers 18-to-34 tune in via the relaunched Freeform app, Hulu and VOD. Total consumption across all digital platforms for the year is up 47 percent, according to the network (7.2 billion minutes versus 4.9 billion). And in a bid to better measure its audience, Freeform is teaming with Nielsen to add live streaming viewership to its numbers, becoming the first cable network to do so (and joining corporate sibling ABC in that effort). Still, the transition presents challenges.

“There’s value in the name change because you’re going to a younger demo, which is where they want to go, but it’s hard to monetize those eyeballs,” says SNL Kagan’s Derek Baine. The firm projects Freeform ad revenue to tally $556 million (up from $451 million in 2014), with $472 million net and a license fee per subscriber at 32 cents.

A new breakout show would help. As Pretty Little Liars and Switched at Birth wrap their runs, network president Tom Ascheim — on the job since 2013 after the former Newsweek CEO replaced Michael Riley — is beginning to usher in his own slate. Ascheim’s recent misses include summer big swing anthology Dead of Summer, the Amanda Knox-themed Guilt, the rehab drama Recovery Road and the single-camera comedy Kevin From Work. Next up are the Stranger Things-like drama Beyond (Jan. 2) and the Bella Thorne vehicle Famous in Love (April). Of Freeform’s nine scheduled scripted originals for 2017, four were developed via Ascheim and his new team — and the total likely will rise to 12. That will put Ascheim’s fingerprints on more than half of Freeform’s roster for the first time.

“We’ve had a great year and are proud of the decisions we made to relaunch the network,” Ascheim tells THR. “We had the best financial year in our history: the greatest revenue, greatest ad sales and greatest operating income.” (The network, part of the Disney-ABC Television Group run by Ben Sherwood, does not break out financial results.)

In a big step to keep revenue in-house, Freeform, starting last January, began retaining stacking rights (in-season and postseason) to all of its originals. Paired with international sales, the returns from SVOD advertising play a big part in the overall bottom line.

But like all cable channels, Freeform is facing stiff competition for top projects from deep-pocketed Netflix, Amazon, Hulu and even YouTube Red. Budgets on Freeform originals are said to be in the $2 million-per-episode range, while some rivals can average $5 million. Agents complain privately that they don’t quite know what Freeform is looking for, and without a recent buzz-building breakout — like, say, Mr. Robot on USA — it’s tougher to lure talent. “When you’re trying to do young, cool stuff, something popping and in the zeitgeist is the key,” says one top agent. “Freeform has Pretty Little Liars, and that’s it.”

Other recent high-profile big swings haven’t advanced as quickly as Ascheim and his team would have liked. Ascheim went straight-to-series in September 2015 on Nicki Minaj’s semi-autobiographical comedy Nicki, which after shooting a pilot in January, is being redeveloped (and is no longer a series order). Then there’s Marvel’s Cloak and Dagger, ordered straight-to-series in April and now eyed for winter 2018 as showrunner Joe Pokaski (Underground) rewrites his initial script.

On the plus side, magazine drama Issues — inspired by Cosmopolitan EIC Joanna Coles and previously developed at NBC — will likely join the schedule in 2017 (with Freeform retaining stacking rights to the Universal Television drama starring Katie Stevens). That will join season two of Shadowhunters and ABC Family favorite The Fosters, which is also expected to earn a fifth season and hit the landmark 100 episodes (with Switched at Birth and likely Baby Daddy also reaching the rare cable milestone). Ascheim also hopes to spend more on original movies and series to further monetize long-running Halloween and Christmas programming blocks that draw upward of 100 million viewers annually. Looking ahead, Ascheim expects the Pretty Little Liars brand to live on (via projects from King and author Sara Shepard), as well as add new series that build on Disney IP (in the vein of the Bachelor spinoff Ben & Lauren: Happily Ever After) in addition to shortform content produced in partnership with ESPN.

Ascheim also says he’s willing to take risks. Freeform will experiment with its rollout strategy for Beyond, launching all 10 episodes online following its linear premiere. And he’s talking with digital outlets about Freeform producing originals directly for streamers, which would create a larger studio footprint (as well as the potential for lucrative off-network sales). It’s all part of the new normal for a cable chief trying to build an audience however he can: “We believe in building digital viewership — and we care about total viewership.” 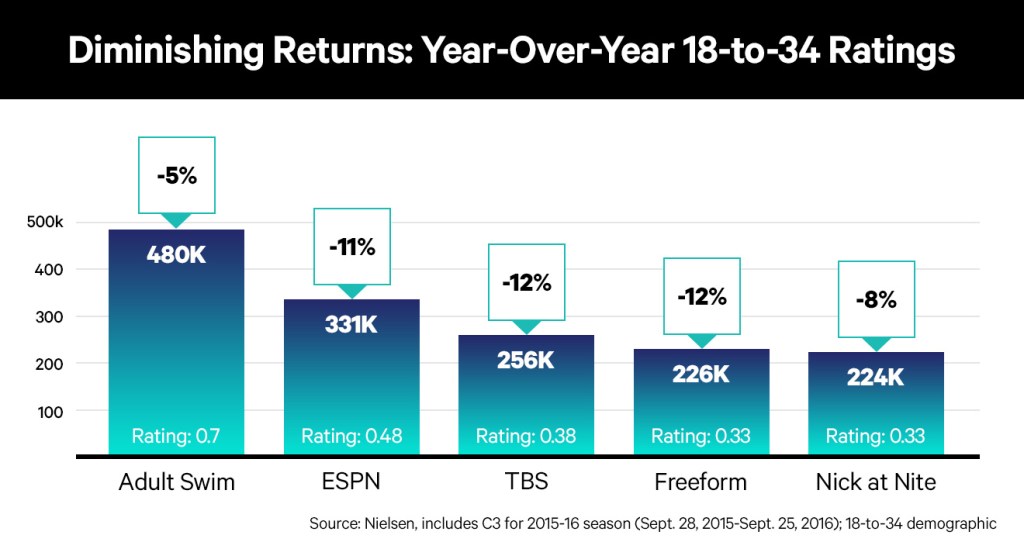