When Nahnatchka Khan set out to adapt Eddie Huang’s memoir for television, she had no plans of shifting any industry narratives. The veteran scribe just wanted her pilot, which focused on the famous Taiwanese-American chef’s childhood in 1990s Florida, to be seen by more than a test audience and a handful of executives.

But four years after Fresh Off the Boat made its way onto ABC as broadcast’s first series to be fronted by an Asian-American cast in two decades — since Margaret Cho’s mid-’90s sitcom All-American Girl — the family comedy now airs in a very different entertainment landscape, one where a film like Crazy Rich Asians (starring Boat‘s lead Constance Wu) can pull $239 million at the global box office. “We premiered February of 2015, which just so happened to be 20 years since All-American Girl,” recalls Khan, 46, whose own parents immigrated to the U.S. from Iran. “I imagine there were other series about Asian families in that time that just never made it onto the schedule, but the fact that we actually got a shot was a big deal.”

Fresh Off the Boat arrived at a moment when broadcast comedy was overwhelmingly white. Save for ABC’s Black-ish, which had premiered a few months earlier, the 20th Century Fox-produced comedy was the lone half-hour on the Big Four with a person of color at the top of the call sheet. “The expectation for me during pilot season was always the best friend, the co-worker, the lab technician,” says Randall Park, whose role as the Huang patriarch was among the first cast by executive producer Melvin Mar.

“The adage when I was coming up was that Asian-Americans were great side characters,” adds Mar, himself Chinese-American. “There are people who think change isn’t happening fast enough, but it’s actually happening. It’s taking hold in a real way.”

The scope of that change stands to broaden significantly come fall. As Fresh Off the Boat, once an anomaly, hits 100 episodes April 5, four broadcast comedy pilots fronted by Asian-American actors are in various stages of production. That number, though still modest, would have been unheard of just five years ago.

As for the series’ own enduring appeal, 4 million viewers still tune in on Friday nights. Wu, for one, believes the show’s success has less to do with its diversity than with its more universal themes. “This show is really about popular culture, the place you grow up,” she says. “It’s about how we all navigate life in this country, a type of solidarity that’s specifically American.”

Khan recently signed a deal that will move her from Disney-owned 20th Century Fox to Universal Television — and will take her off of Fresh Off the Boat should the series return for a sixth season. Now wrapped on her last season with the show, she reflected recently on its unique journey, TV’s history of avoiding topical comedy, and telling immigrant stories at a time when America is debating a border wall.

How conscious were you of the dearth of Asian-American stories on TV before you got the pickup?

Every step of the way, the odds are stacked against you. So we definitely were not thinking about that. I had just had my previous show, Don’t Trust the B— in Apartment 23, canceled on ABC. The wounds were still fresh. But [then-network president] Paul Lee said, “This show belongs on ABC.” I didn’t want to be Charlie Brown and ABC is Lucy with the football. We had multiple offers from all the networks, but I just decided to trust those guys.

Do you think the show deserves some credit for the push for diversity in TV?

I like to think that we had a hand in that tsunami of different faces on TV and changing the game in a way. In the grand scheme, five years is not a huge amount of time. But, in the TV business, everything has changed. I feel like we were at the beginning of that tidal wave and we had our part to play and I’m really proud of that. 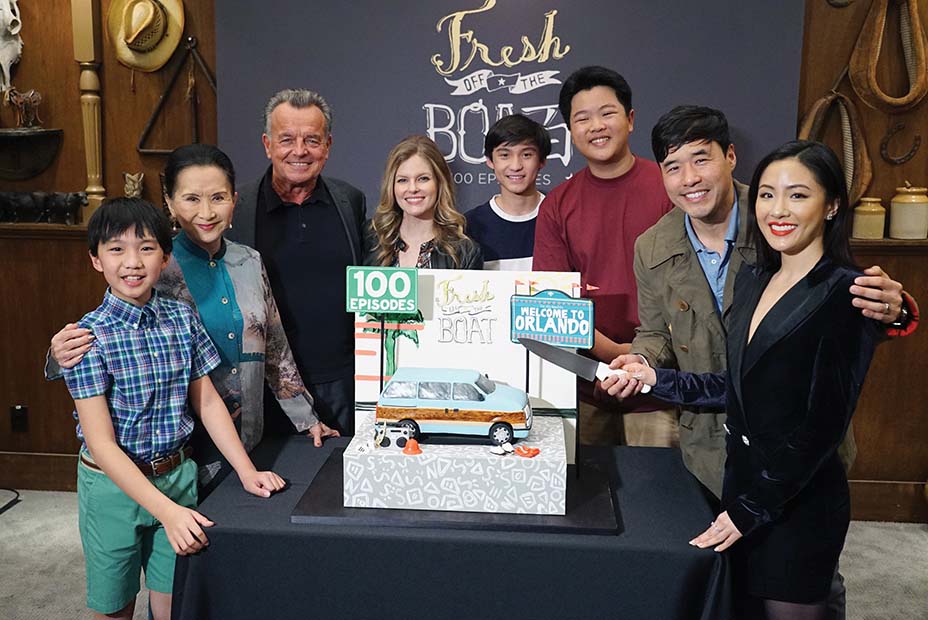 Now the conversation is becoming about authenticity. Today, Randall might not get cast — he’s Korean-American, not Taiwanese.

Now that more of these kinds of shows are coming out, you can get a little more nuanced about it. If you do a specific thing about Filipino-Americans, make sure your whole cast is exactly what you want. And that, even in the casting realm, has been a big influence. I think people are treating it as a vital piece of the puzzle now, as opposed to something like an afterthought.

Two years in, a very anti-immigrant administration was voted into office. How did that influence the kind of stories you were telling?

Everybody was very shaken by the 2016 election. It seemed like such a platform of hate that [Trump] was running on. Once we got past the shock, it galvanized us as a unit to say, “OK, well, here’s our platform. We’re reaching millions of people every week. How do we want to show people who maybe don’t know any Asian-Americans or don’t have that immigrant experience, through the lens of comedy, what it’s like? Let’s help them gain a greater understanding and maybe a little more empathy for the journey of people that are different from them.” So we had a whole season arc about Jessica [Wu’s character] wanting to get her American citizenship and that process. We were able to kind of really dig in.

That’s not the kind of thing anybody saw on a sitcom for decades.

Norman Lear was talking about everything in the ’70s … race, sexism, all of it. The network comedy really stayed away from that in the 1980s and 1990s. Seinfeld was an amazing show. It’s iconic and defined a whole generation of comedy writers — but by their own admission, that show was about nothing. When we came out, with shows like Black-ish, there was a re-embracing of the thing that you weren’t supposed to talk about — which is race.

The Cosby Show is obviously tainted now, but it’s odd to look back on a show about a black family that largely ignored race.

I can’t think of an episode where they tackled it head-on. They were trying to teach Theo about the value of money through Monopoly or whatever. Looking back through the 2019 lens, that was wild.

Your new deal means this is it for you, whether the show comes back or not.

Last summer, I directed a movie for Netflix starring Randall Park and Ali Wong, so I bumped up people who had been here since the very beginning to EPs and they’ve been running the day to day. So the infrastructure is in place. If the show were to continue, it would be in great hands.

Would it be weird for you to watch?

I can’t even imagine. That would be so wild! I’d be calling in with notes, and they’ll be like, “It’s already on the air.” “But I have a few thoughts!”