Could Friends fans be any more excited?

The beloved series will celebrate the 25th anniversary of its premiere on NBC this fall and to commemorate the occasion, production company Warner Bros. along with the studio’s consumer products division and Superfly have teamed up to create an immersive Friends pop-up experience in New York.

The space, layout embedded below, will give visitors a chance to revisit memorable settings like Chandler and Joey’s recliners and foosball table; Monica and Rachel’s purple door; the narrow stairwell through which Ross, Chandler and Rachel struggled to maneuver a sofa despite multiple “pivots”; a re-created Central Perk, orange couch and all; and even an area inspired by the fountain from the opening credits. The SoHo pop-up, featuring props and costumes, will also give fans a chance to learn some of Monica’s cleaning tips and check out Phoebe’s favorite things (“something with mittens?”).

“It’s been nearly 25 years since Friends premiered, but the fascination and universal appeal of the hit TV series lives on with fans of all ages,” Warner Bros. consumer products’ senior vp, global themed entertainment, Peter van Roden, said in a statement. “As we celebrate the show’s milestone anniversary, we are excited to bring the Friends experience to life for our fans in a way that pays homage to the remarkable cast of characters, iconic sets and instantly quotable moments.”

The monthlong pop-up, which includes a Friends store, opens Sept. 7 and runs through Oct. 6, with the first day dedicated exclusively to AT&T customers who can get complimentary tickets through the AT&T Thanks program. The experience will be open seven days a week from 10 a.m. to 10 p.m., with tickets going on sale Friday for $29.50 each.

A similar prop- and costume-filled Central Perk popped up in New York to celebrate Friends‘ 20th anniversary five years ago.

The Friends pop-up comes just weeks after Warner Bros. parent company WarnerMedia, which in turn is owned by AT&T, announced that all 10 seasons of the beloved series will be streaming exclusively on its new HBO Max service when it launches in the spring of 2020. 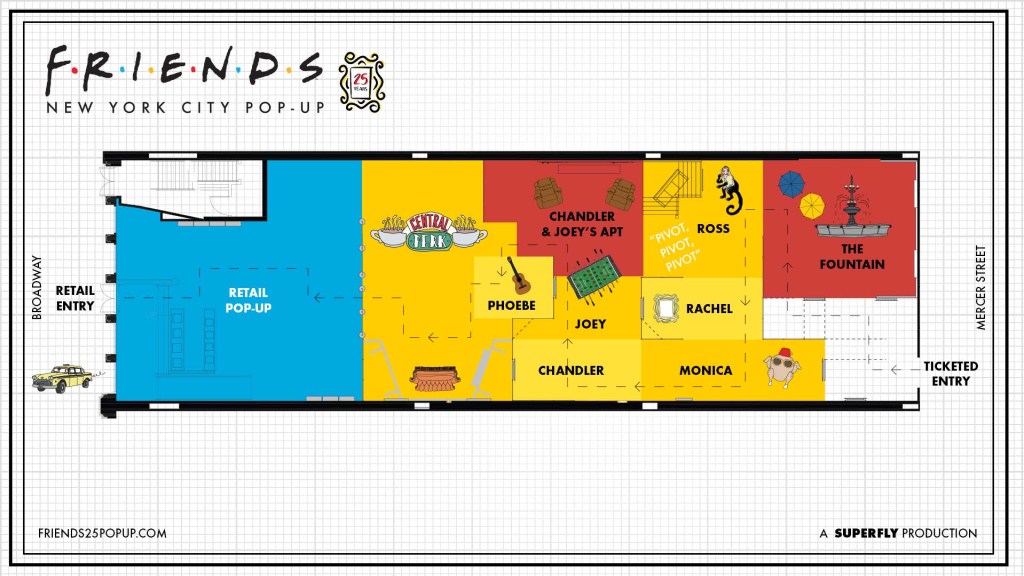