New data from Nielsen supports why Netflix was willing to pay such a premium to continue streaming Friends through the remainder of 2019. It also might help explain why “So what are you watching?” is such common small talk.

The ratings service’s latest Total Audience Report (for the third quarter of 2018) focuses on how viewers find and select streaming content. The upshot: Consumers largely base their decisions on what — and who — they already know.

A quarterly survey by Nielsen’s MediaTech Trender, which focuses on emerging technology and services, shows that when it comes to picking streaming content, the most influential factor — cited by two-thirds of respondents — is “existing shows I used to watch on broadcast media being available for streaming.”

Netflix paid WarnerMedia, which owns Friends, between $70 million and $80 million to keep the show this year — a more than 100 percent premium on the series’ initial four-year deal with the streaming giant, which ran about $30 million annually. (WarnerMedia has options starting in 2020 to add Friends to its own direct-to-consumer service.)

Figures like that speak to how important library content is to streamers. Hulu has said its users watch 20 hours of animation per month, a big reason it locked down exclusive streaming deals for Family Guy, King of the Hill, Bob’s Burgers and other 20th Century Fox TV series.

On the flip side, streaming may have helped extend the lives of some long-running shows. Younger viewers who discovered Grey’s Anatomy on Netflix have helped keep the ABC series among TV’s top-rated dramas into its 15th season, the network’s head of programming strategy, Andy Kubitz, told The Hollywood Reporter.

The second biggest factor in selecting streaming content, cited by 66 percent of Nielsen’s respondents, is recommendations from family and friends. That ranks several points ahead of any other method of discovery, as seen in the graphic below, and 18 percentage points ahead of the streaming services’ own recommendation engines. 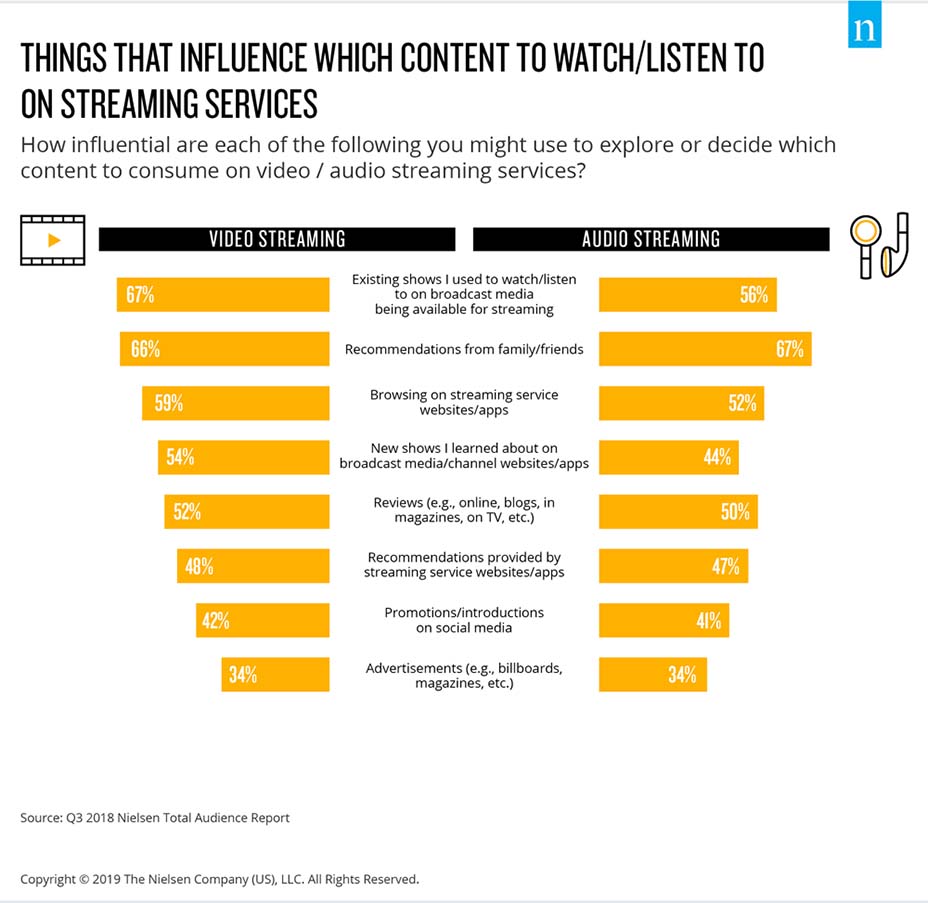 Reviews and information about new shows on broadcast media also rank ahead of recommendation engines. Traditional advertising is cited least among the eight factors Nielsen lists.

Subscription-based VOD services — big players Netflix, Amazon’s Prime Video and Hulu, along with more specialized platforms like DC Universe and ESPN+ — now reach 67 percent of the nearly 120 million TV households in the U.S. as of September 2018. That’s up from 61 percent a year earlier.

The most important attributes for a streaming service, per Nielsen’s survey, are the variety of content available (67 percent say yes), ease of use (56 percent) and access to movies (52 percent). More than four in 10 respondents (43 percent) said access to local programming is important, and 35 percent say they wanted to stream live sports.

Among people who don’t intend to add streaming services to their media diet, the most common reasons are satisfaction with current providers (cited by 36 percent) and the additional cost (33 percent).