The kidnapping of John Paul Getty III is a famous story, but it hasn’t been told the way FX’s new drama Trust will show — and the team behind the series says there’s much more to tell when it comes to the Getty family saga.

“Way, way back, we envisioned this as a five-season series,” exec producer Danny Boyle, who also directs the first three episodes, tells The Hollywood Reporter of his and creator Simon Beaufoy’s plan of bringing the Gettys to FX. “Then they rationalized it — and intensified it — down to three.”

Trust is inspired by the actual events surrounding the disappearance of the teen grandson to J. Paul Getty Sr. (played by Donald Sutherland) and heir to the Getty oil fortune, and takes place in 1973. During the course of 10 episodes, the drama will take a deep dive into the complex kidnapping and the reasons why the richest man in the world refused to pay a multimillion-dollar ransom, which he could certainly afford, in order to return his grandson to safety.

Led by Sutherland as the Getty patriarch, the stellar cast includes Hilary Swank, who plays the mother of the missing boy, Gail Getty, and Brendan Fraser, who steps in as Getty’s security chief, James Fletcher Chace, also the show’s narrator. (Those roles were played by Christopher Plummer, Michelle Williams and Mark Wahlberg, respectively, in Ridley Scott’s recent big-screen telling, All the Money in the World.) But Trust also widens out as an ensemble to bring Paul Getty III (Harris Dickinson) and his father J. Paul Getty Jr. (Michael Esper), as well as other members of the Getty family and girlfriends of Getty Sr., into the fold.

“There’s so much to say and do about three generations of Gettys,” Beaufoy told THR at the New York City premiere of Trust, detailing his long-term vision should the show get an official renewal from FX. “Like, where it all started with this story of a man who came to be obsessed with money — what happened in his childhood that made him so obsessed with money?”

Adding, “And there’s the years beyond 1973, where the family got together and decided the only way to survive was to get rid of the trust, to dissolve it. That was a big battle, so there’s a whole other story there.”

Beaufoy, who wrote the series, had hoped to speak to the one living Getty family member from that time, but never had any conversations with Gail Getty. “I really wanted to talk to her, but it proved very difficult for legal reasons,” he says. “I have huge admiration for her. She’s the one person in the story with no money, who kept the faith the whole time and wanted her son released. She worked tirelessly to get him released and yet she had no agency. She was divorced from the Gettys, she had no cash. She’s an extraordinary woman and Hilary Swank plays her as the true heart of the whole series.” 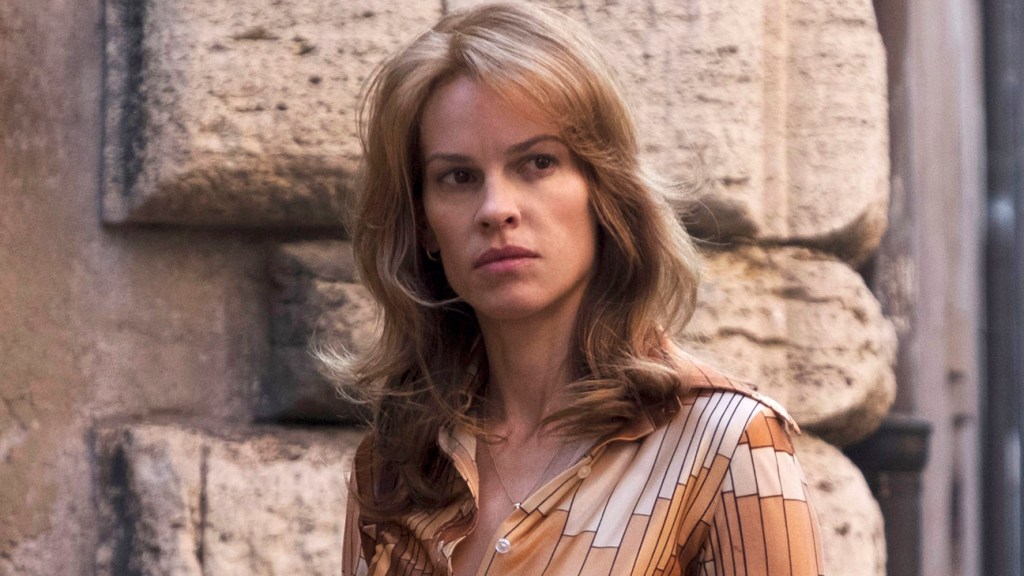 The first season of Trust, which premieres March 25, will end with the release of Getty III in 1973. The pivotal development of the saga, when the kidnappers cut off Getty III’s ear to mail back to Rome, will play out in the eighth episode in a way that Beaufoy says will be unexpected.

“It’s a really beautiful scene actually, it’s really sad,” he says of the event and performance by Dickinson. “It’s not gory in a way you would expect, it’s actually very moving.”

The season was filmed on location in Rome, Surrey — home to Getty’s mansion, Sutton Place — and Calabria in Southern Italy. The show couldn’t film in Sutton Place, which is now owned by a Russian oligarch, and re-created Getty’s sprawling home by filming at three separate mansions just outside of London.

Though Beaufoy plans for three seasons, he says they wouldn’t roll out yearly. With such a vast production, it would be “at least two years” between cycles and while they are already thinking about season two, they haven’t begun writing it yet.

With that kind of time commitment, Boyle credits the script, and the changing film and TV landscape, to being able to get and keep a cast that includes more than one Oscar winner.

“They still might say no, because they worry about tying themselves down to one thing. But if you’ve got a great script, then it’s to do with the times and the times have changed,” says Boyle. “Actors can see that movies are changing — you have these tentpole movies, the Marvel world and huge animation movies — and they’re looking for where the interesting parts are for them, and clearly it’s migrated to this new television world. You change with the world, you’re finished if you stand still because the tidal wave will just drown you. You have to surf with it.”

'Trust': A Guide to the Getty World Featured in the FX Family Drama