“I’ve always had a passion for acting, even when I was in gymnastics. It’s an art, and it’s fascinating to me how people can be moved by your performance,” Douglas told The Hollywood Reporter.

She will play Twisty, the head of the Gold Medal Girls who resides in the land of the munchkins, in the show’s one-hour season-three finale, which will air later this year.

“There is a lot of flipping, which is very relatable, and kind of sassy lines. I saw myself in the character, how I would act and things I would say,” Douglas said about her role on the show.

“I like not playing myself,” Douglas added. “That’s what I love about acting: It’s different and it’s an art. You get to be someone else and connect with someone’s emotions.”

The series follows the adventures of four 12-year-old quadruplets — Nicky (Aidan Gallagher), Ricky (Casey Simpson), Dicky (Mace Coronel) and Dawn (Lizzy Greene) — who don’t have much in common except their birthday.

The season finale, titled “The Wonderful Wizard of Quads,” finds a hometown celebrity (Tia Mowry-Hardrict) returning to Boulder, Colo., to direct the local production of The Wonderful Wizard of Oz. The Quads know these are the roles they were born to play, but when Dawn does not get the part of Dorothy, she goes on a mission to prove that she deserves the part over a theater diva (Jade Pettyjohn).

The episode also will feature two original songs performed by Greene and Pettyjohn. 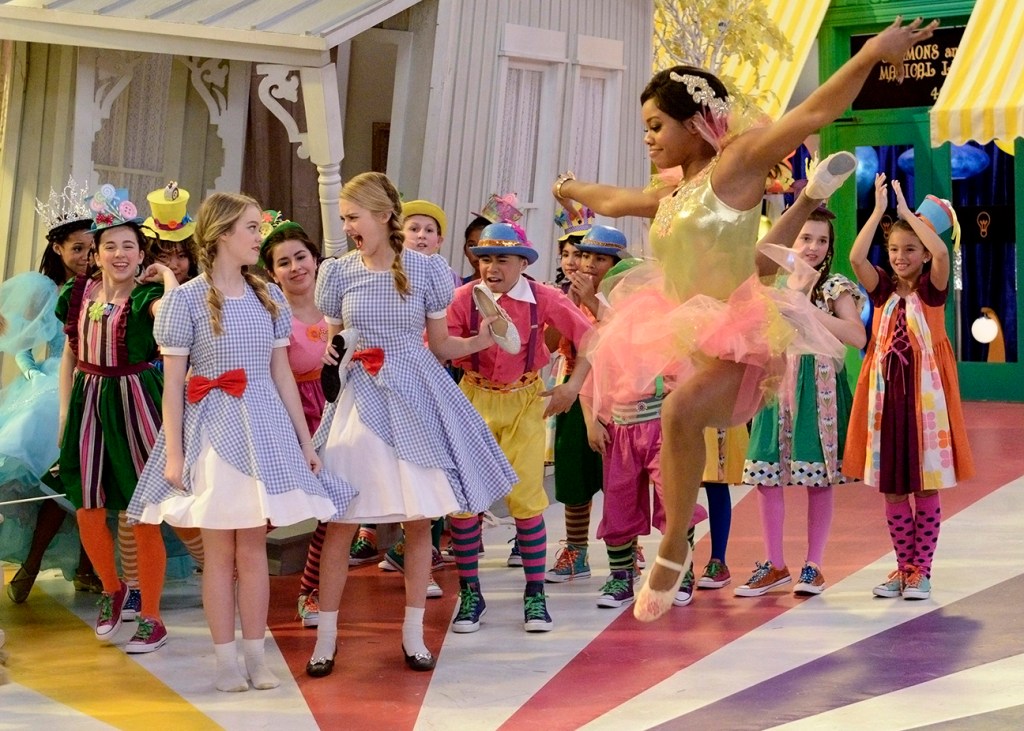 While filming the episode last week, Douglas said there was a moment when she gave the cast and crew “an adrenaline rush.” She was performing a gymnastics move in the air when she noticed a group of kids close to her. “Someone almost did, but no one got injured,” Douglas said. “They told me to do a flip and I saw all these kids behind me, so I had to slow down gravity and kind of bend my knees to not hit them.”

Douglas is the first woman of color and the first African-American gymnast in Olympic history to become the individual all-around champion, at the 2012 London Olympics. She is also the first American gymnast to win gold in both the gymnastic individual all-around and team competitions at the same Olympic Games and became one of only two U.S. gymnasts in history to win gold medals at back-to-back Olympics at the 2016 Games in Rio.

Douglas previously had a cameo on The Vampire Diaries in 2012 and also played herself in the biopic The Gabby Douglas Story in 2014. The TV movie recounted her gymnastics journey and the obstacles she faced leading up to the Olympic Games.

When asked about the most exciting thing that’s happened to her since taking home the gold, she told THR acting on the Nickelodeon show was it.

“I don’t want to be cliche but this role. I am a huge fan of Nickelodeon so, this is the main thing for me,” Douglas said. “It’s been so much fun.”