Game of Thrones is headed to Broadway.

A dramatic stage show spectacular based on George R.R. Martin’s fantasy world is now in development, The Hollywood Reporter has learned exclusively.

The play is from producers Simon Painter and Tim Lawson (The Illusionists), in partnership with Kilburn Live, and will have a story by Martin, who is working alongside award-winning playwright Duncan MacMillan (1984) and acclaimed director Dominic Cooke (The Courier). The team’s goal is to debut productions in New York City, London’s West End and in Australia. The first show is expected to launch in 2023.

The production includes a particularly unique story element that should be a huge draw for fans: While many prequel projects have been put into development since Thrones concluded in 2019, this will mark the first to bring back several of the most beloved Game of Thrones characters. The as-yet-untitled play is set during a pivotal moment in Westeros history, The Great Tourney at Harrenhal, a contest that took place just 16 years before the events in Game of Thrones.

“The play will for the first time take audiences deeper behind the scenes of a landmark event that previously was shrouded in mystery,” reads the play’s official description. “Featuring many of the most iconic and well-known characters from the series, the production will boast a story centered around love, vengeance, madness and the dangers of dealing in prophecy, in the process revealing secrets and lies that have only been hinted at until now.”

In Westeros lore, the Great Tourney was held over 10 days and was considered the biggest competition event in Westeros history, with tournaments of jousting, archery and more. No characters have yet been officially confirmed for the play. But according to Martin’s previously published books, attendees of the event included a young, shy Ned Stark, his rebellious sister Lyanna, cocky teenage Jaime Lannister, powerful Lord Robert Baratheon, lovestruck Prince Rhaegar Targaryen, dashing Prince Oberyn Martell and noble knight Ser Barristan Selmy, among many others (keep in mind, Martin’s Westeros timeline is different than the HBO series as the show had to age-up several characters in order to hire actors who could work with adult material).

“The seeds of war are often planted in times of peace,” Martin said in a statement. “Few in Westeros knew the carnage to come when highborn and smallfolk alike gathered at Harrenhal to watch the finest knights of the realm compete in a great tourney, during the Year of the False Spring. It is a tourney oft referred during HBO’s Game of Thrones, and in my novels, A Song of Ice & Fire … and now, at last, we can tell the whole story… on the stage.”

Some other characters who were around during that time period and who could likewise, in theory, be included the show include Cersei Lannister, Tywin Lannister, Tyrion Lannister, Littlefinger and Varys. Younger characters from the series – such as Daenerys Targaryen, Jon Snow and Arya Stark – were not yet born. At the conclusion of the event, Prince Rhaegar publicly declared his love for Robert’s betrothed, Lyanna Stark – a move which led to Robert’s Rebellion and the Targaryens being overthrown.

The franchise expansion to the stage is reminiscent of J.K. Rowling’s move after the conclusion of the author’s Harry Potter saga. Rowling unveiled an acclaimed two-part special-effects-stuffed stage show, Harry Potter and the Cursed Child, which included fan-favorite characters from a very different time period than in her books. Cursed Child debuted in London in 2016 and then expanded to Broadway, Melbourne and Toronto. By 2019, Cursed Child was reportedly the highest-grossing non-musical in Broadway history, having made more than $146 million until it was shut down by the coronavirus pandemic.

Added Martin about the Thrones production: “An amazing team has been assembled to tell the tale, starting with producers Simon Painter, Tim Lawson and Jonathan Sanford. Their knowledge and love of my world and characters has impressed me from the very first, and their plans for this production blew me away since the first time we met. Dominic Cooke, our director, is a former artistic director of London’s Royal Court Theatre, who brought Shakespeare’s dramas of the War of the Roses to television, and our playwright, Duncan Macmillan, has previously adapted George Orwell and Henrik Ibsen, among others. Working with them (back before the pandemic, when we could actually get together) has been a treat, and I am eager for our collaboration to resume. Our dream is to bring Westeros to Broadway, to the West End, to Australia… and eventually, to a stage near you … It ought to be spectacular.”

(The War of the Roses, incidentally, was also one of Martin’s real-life inspirations for ASOIAF).

MacMillan’s theatrical work includes Lungs; People, Places and Things; Every Brilliant Thing; and an adaptation of 1984. His work has been performed throughout the world, including at the National Theatre, the Old Vic, the Royal Court, in the West End and on Broadway. His screen work has appeared on the BBC, HBO, Netflix and at the Berlin and London Film Festivals.

“I have such admiration for George’s world and his characters,” MacMillan said. “His generosity and trust during this process has been incredible. Working on this play during lockdown has felt like a real privilege. I can’t wait until we can be back in a theatre to experience this together.”

Director Cooke previously was the Artistic Director of London’s Royal Court Theatre from 2007 to 2013. His production of Sondheim’s Follies at the National Theatre, where he is an associate, was nominated for 10 Olivier awards. He recently transitioned to TV and film with several titles including The Courier starring Benedict Cumberbatch.

“I am over the moon at being given the opportunity, by the dynamic producing team of Tim Lawson, Simon Painter and Kilburn Live, to bring a new installment of George RR Martin’s epic story to a life on stage,” Cooke said. “One of George’s inspirations for the original books was Shakespeare’s history plays so the material lends itself naturally to the theatre. Duncan MacMillan and I are having a great time digging into the dynastic power struggles at the heart of George’s extraordinary imaginative world and he has been hugely generous and supportive towards both of us.”

HBO is not formally involved with the project at this point but has the option to invest in the production at a later date. In addition to Painter and Lawson, Vince Gerardis and Jonathan Sanford will also serve as executive producers.

The news comes on the heels of Martin striking a new five-year overall deal with HBO to create content for the network. HBO has already greenlit one Game of Thrones prequel, House of the Dragon, which is expected to premiere in 2022, and has at least five others in various stages of development for HBO and HBO Max. 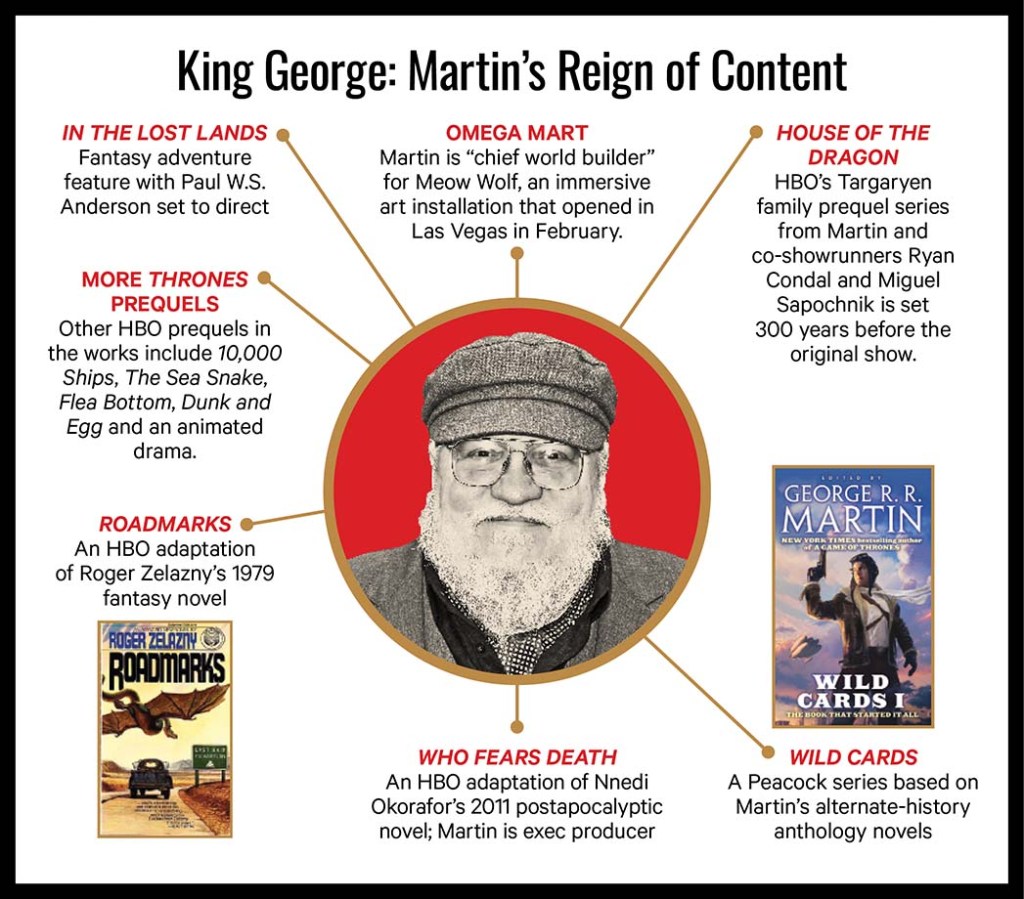