Continue to The Hollywood Reporter SKIP AD
You will be redirected back to your article in seconds
Skip to main content
August 2, 2017 8:00am
Logo text

[Warning: this story contains spoilers for the third episode of Game of Thrones‘ seventh season, “The Queen’s Justice.”]

“At this stage? None of us are getting out of this alive.”

Those are the wise words of Conleth Hill, the man who plays Varys on Game of Thrones. He should know: the Spider has been at least partly responsible for several deaths across the series, and just learned that he himself has a prophesied date with the Stranger. Plus, it’s par for the course: When you play a character on Game of Thrones, you win or you die — unless you’re Lady Olenna of House Tyrell, in which case, you win and you die.

'Game of Thrones' Star Looks Ahead at Varys' Ominous Future

The iconic Diana Rigg, who brought the Queen of Thorns to life starting with the third season of Thrones, was freed from her service to Westeros in the show’s most recent episode, “The Queen’s Justice.” Unlike so many others who have lost their lives in the deadly games played for the Iron Throne, Lady Olenna was allowed a graceful exit: a painless death via a poisoned wine, so painless in fact that viewers weren’t forced to watch her actual passing. What’s more, she managed to score one final victory in the moments before her death, confessing to Jaime Lannister (Nikolaj Coster-Waldau) that she was responsible for assassinating Joffrey (Jack Gleeson) several seasons earlier.

We’ll drink to that.

“I think wine, much like any good story, has complexity,” says Cabral, on the ways in which wine has been featured on Game of Thrones, both as a cause for celebration and as the source of violent demises. “Each wine has a unique backstory and characteristics that make it what it is, which parallels to these fascinating characters and plotlines we see with stories like Game of Thrones. I think it also has a historical value to it that can almost feel mythical. Wine has been around for hundreds of years — who’s to say it hasn’t been around in fictional worlds for just as long?”

With that said (and with the added mention from Cabral about his product: “I promise this wine is not poisoned!”), read on for our favorite wine-soaked scenes in Game of Thrones — the two aforementioned scenes notwithstanding, may the Queen of Thorns rest in peace (if not the Freys). 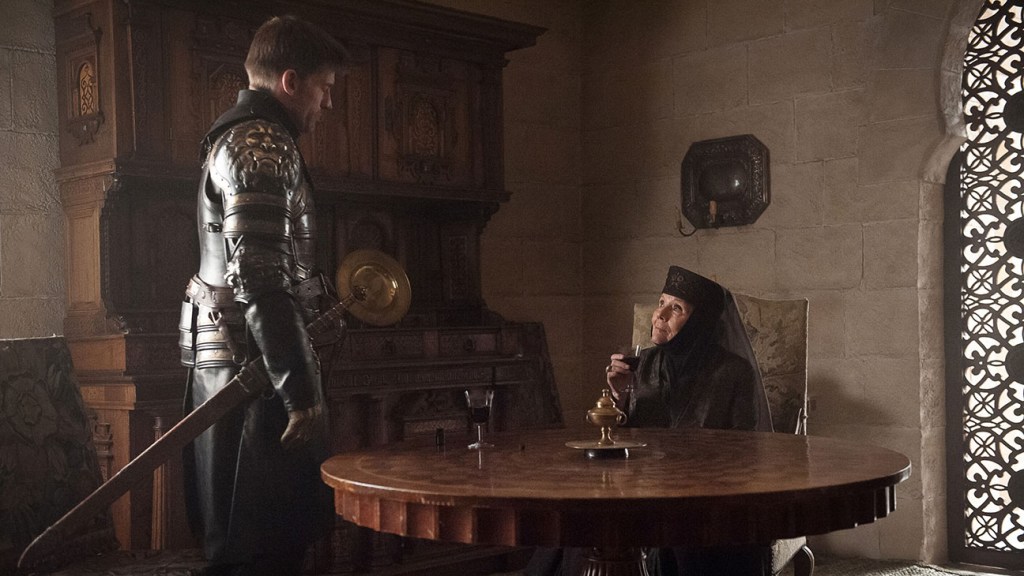 It shouldn’t come as a surprise, but Tyrion (Peter Dinklage) is the most valuable player in the Game of Thrones wine department, or at least its most prolific. Still perhaps his most memorable drinking scene: the moment in season one when he, Bronn (Jerome Flynn) and Shae (Sibel Kekilli) play a drinking game during a brief moment of respite from war.

Another fantastic Tyrion drinking scene comes early on in season two, when the acting Hand of the King invites City Watch commander Janos Slynt (Dominic Carter) over for dinner and more than a few glasses of red wine. Even if Slynt had kept it only to “a few,” he wouldn’t have escaped Tyrion’s brilliant plan to send this child-murdering man to Castle Black.

The Booze of Blackwater Bay

Cersei Lannister (Lena Headey) would be the foremost drinker on Game of Thrones, if not for Tyrion. While the battle of the Blackwater raged on outside the walls of the Red Keep, Cersei relentlessly boozed her way through the evening, even convincing her would-be future daughter-in-law Sansa (Sophie Turner) to imbibe. The way she drinks through the scene, you get the sense Cersei doesn’t intend to survive the night — which, actually, is more or less exactly what’s at stake.

Yet another great Tyrion drinking scene, albeit one that’s as funny as it is depressing. Fresh from sailing across the Narrow Sea inside a small box, Tyrion’s first act in Pentos is to chug massive quantities of wine. He immediately pukes it all up. That doesn’t stop him from continuing to drink his way through much of the next few episodes. That’s Tyrion in a nutshell: he drinks, he knows things and he throws it all up.

A much happier affair than her second marriage, albeit one that was still an unpleasant evening, thanks in large to how much wine Tyrion consumed throughout the night. It culminated in Tyrion completely losing his cool with the ferocious Tywin Lannister (Charles Dance), one of few times he allowed himself to rise up against his father — until that fateful night in the privy just one season later.

You can’t blame the copious amounts of wine the Stark army consumed for their complete decimation at the Twins, but it was certainly a contributing factor. Booze-addled soldiers are no match for the unforeseeable cruelty and cunning of Tywin Lannister, especially when his schemes and plots are backed up by the equally wicked Walder Frey and Roose Bolton (Michael McElhatton).

The event that led to what still remains the single most satisfying death in Game of Thrones history: Joffrey Baratheon chugging wine all through his wedding day, only to finally sip on a fateful poisoned cup, ending his life in a dizzying display of purple-faced chaos. Reliving that moment, it’s no wonder Lady Olenna was able to die with so much satisfaction.