“We’re probably going to die soon. I want to know what it’s like before that happens.”

And with those words, the romantic possibilities between Arya Stark (Maisie Williams) and Gendry (Joe Dempsie) were no longer just the stuff of fan fiction. In “A Knight of the Seven Kingdoms,” with hours left before the White Walkers arrive at Winterfell, Arya meets Gendry in one of the castle’s many corridors and makes her intentions clear: she wants to sleep with Gendry, her childhood friend, the black-haired blacksmith she once admired from afar. That distance is officially closed. Whatever happens next, the daughter of Ned Stark (Sean Bean) and the son of Robert Baratheon (Mark Addy) were an item for at least one night — a development some fans speculated about going as far back as the characters’ time together on the road in seasons two and three.

It’s a happy moment in otherwise bleak times for both Arya and Gendry, but how has the audience responded to the scene? With memes and mixed reactions, based on a quick stroll online. How did the creators of the series justify the scene? In HBO’s Inside the Episode feature after “A Knight of the Seven Kingdoms,” Thrones co-creator David Benioff offered the following explanation: “For us, what was interesting about this episode was that this is our last night together, and I think everyone would face the end in different ways. Some characters want to make love for the first time because they’ve never done it before, and other characters are getting drunk and singing songs.”

Beyond Arya, Benioff is referring to the other moments of character triumph throughout the episode, such as the scene in which Jaime (Nikolaj Coster-Waldau) knights Brienne of Tarth (Gwendoline Christie) in front of unlikely drinking companions Tyrion (Peter Dinklage), Davos (Liam Cunningham), Podrick (Daniel Portman) and Tormund (Kristofer Hivju).

“Everyone faces [the end of the world] in different ways,” he says, “but they’re all facing it and that’s why this episode was so important to us because, it’s all these characters that we’ve been following for so long and now they’re facing a common enemy.” 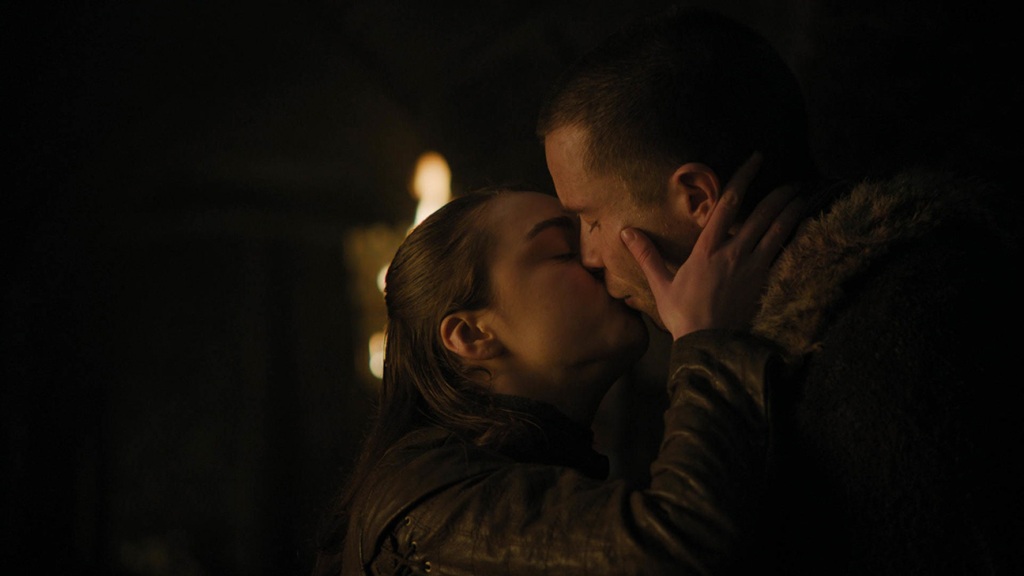 For her part, Williams spoke with EW about the scene, saying she first believed it was a prank from the creators. “David and [co-creator Dan Weiss] were like: ‘You can show as much or as little as you want,'” she said, speaking about the amount of nudity featured in the scene. “So I kept myself pretty private. I don’t think it’s important for Arya to flash. This beat isn’t really about that.”

What was it about, then? Williams’ answer on the meaning of the scene: “It was really interesting because it’s a very human relationship for Arya.… This is something she’s stayed away from, an emotion we’ve never really seen her engage with. David and Dan were like, ‘It’s the end of the world, what else would you have her do?’ This may be a moment where Arya accepts death tomorrow, which she never does — ‘Not Today.’ So it was that moment where she says, ‘We’re probably going to die tomorrow, I want to know what this feels like before that happens.’ It’s interesting to see Arya be a bit more human, speak more normally about things people are scared of.”

Two days after the episode aired, Williams responded on social media to fans who felt uncomfortable about the scene, tweeting: “if u feel uncomfortable just know that my mother and my step dad and my 2 sisters and my 4 brothers have all probably watched this too ahahakillmeehehe.”

Previously, The Hollywood Reporter spoke with Dempsie about returning to Game of Thrones in 2017, after a three-season break from the series. In that interview, he was asked to speculate on a possible romantic future between Gendry and Arya. His response at the time: “I think it’s implied in the books that there might be a romantic element to the relationship, and in the books I think the characters are significantly closer in age. I know from my personal experience, when we were filming the earlier seasons and people would ask about that and talk about that, I would feel slightly uncomfortable. I’m acting alongside a child here. I was a 25-year-old man. I sometimes found that question a little hard to address and a little tricky to answer.

“As a result of the difference in age, I think one of the roles Gendry played in Arya’s story was as him being an older guy who sort of awakens certain feelings in Arya for the first time as she’s becoming a young woman. There’s that scene in season two where I’m forging a sword — fairly inexplicably without a shirt on — and I think the idea was to convey the idea of Arya experiencing feelings she’s never felt before. Everyone’s had that at some point. Whether that means Gendry has a place in Arya’s heart or vice versa, I have no idea. I think there’s almost a sibling element, too. At that point in the story, Gendry really reminded her of her brothers and of home. That was the comfort with him. But it could go a number of ways. It would just be nice if they met again, wouldn’t it? It’s a pairing you wouldn’t want to mess with.”

As for how his thoughts evolved on the matter, Dempsie told EW: “It’s obviously slightly strange for me because I’ve known Maisie since she was 11, 12 years old.… At the same time, I don’t want to be patronizing toward Maisie — she’s a 20-year-old woman. So we just had a lot of fun with it.”

Where does the scene leave Arya and Gendry moving forward? For one thing, they won’t be sleeping in. The White Walkers have arrived at Winterfell by the end of “A Knight of the Seven Kingdoms,” and Arya has a brand new Gendry-forged weapon to test out. Expect to see its results in action in the supersize, action-oriented episode three, directed by “Battle of the Bastards” helmer Miguel Sapochnik.