When Game of Thrones returns for its seventh season, expect some big changes to the way things work in Westeros.

There’s the snowfall associated with winter’s arrival, of course, but something else is accumulating even faster than the frosty downpour: narrative momentum. Speaking with The Hollywood Reporter, the various members of the Thrones cast all agree that the upcoming seven-episode seventh season will be an even more heightened affair than usual, and it’s easy to see why. For the first time all series, folks like Daenerys Targaryen (Emilia Clarke) and Cersei Lannister (Lena Headey) are existing on the same continent as one another. A first meeting between those characters and others feels all but inevitable.

“A lot of people meet this year that you’ve been waiting to meet,” Kit Harington tells THR. “That’s a big payoff for fans who have watched for so many seasons. They’ll get that payoff this year.”

With the show’s action focused so squarely on the Seven Kingdoms now, and with only 13 episodes remaining before it’s all said and done, the pace of the “great game” will be one of the deadliest players on the field. Here’s what the cast told THR about what to expect from the coming season’s faster-than-ever storytelling:

Kit Harington (Jon Snow): “It’s incredibly fast. It’s a different TV show, really. I read it and couldn’t really believe what I was reading, since we’ve set the bar for slow-paced TV over the years, with characters not meeting when you think they’re going to meet. It was almost frustratingly slow. Now, everything’s changed. Everything ramps up.”

Isaac Hempstead Wright (Bran Stark): “It’s nuts. We shoot with two units in Belfast all of the time, and every other day, it felt like some massive sequence was going on. Like, ‘Oh my gosh, where are you going?’ Then they’ll recount to you the massive scene they were about to go off and shoot. It was like that reading the script.”

Aidan Gillen (Petyr “Littlefinger” Baelish): “In terms of storytelling, everyone knows there are two seasons left. These storylines and narratives that have been running on parallel tracks are probably going to intersect. It’s quite thrilling for everybody.”

Conleth Hill (Varys): “The pulse is quickened. The heartbeat’s quickened. Everything is ramping up toward some final showdown.”

Gwendoline Christie (Brienne of Tarth): “It really feels like we’re moving along at a lick, doesn’t it? It feels like there’s a lot of pace, because we only have 13 episodes left to tell this story. There are so many complex storylines that need to be resolved. We’re also so invested in the story. We want some kind of resolution, even if it’s an unsatisfying one. The worlds are starting to fold in on themselves.”

Nikolaj Coster-Waldau (Jaime Lannister): “We’re so used to having characters in different parts of this world. Now, they’re all very close. It’s difficult to get into because we don’t want to spoil the show, but you do feel this momentum.”

Jerome Flynn (Bronn): “The richness of characters who have never met before … potentially, it looks like there’s a lot going on there. I don’t think I can say much more. All of those lives are coming together and all of those yearnings for power makes it, as a viewer and a fan — because I don’t know everything that’s happening next season, honest to God — but I’m like, ‘This is going to be good.'”

Liam Cunningham (Davos Seaworth): “I will say specifically the fire and ice thing with Jon and Dany and all of that business … people have seen the lady arriving, with all of her entourage. She’s hitting Westeros. Jon is in Westeros. There’s an inevitability about this that nobody’s fighting. People are coming together. It was slightly odd for us this year. It’s slightly different. Instead of all these disparate stories happening, we zip from one area to another. There’s a coming together. Who’s coming together? I ain’t telling ya.” 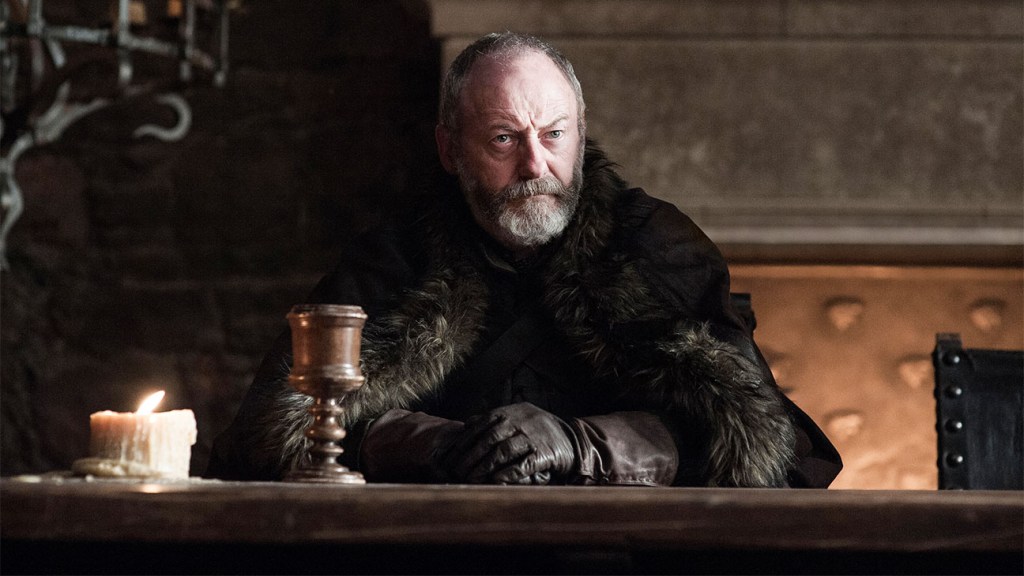 John Bradley (Samwell Tarly): “Normally, we have ten hours. This time, we only have seven hours. Just by design, if we want to tell the same amount of story — which we do — in the space of seven hours that we normally take ten? It’s going to be richer. It’s going to be quicker. You can definitely feel a sense of momentum building now.”

Hempstead Wright: “We only have seven episodes this season, but it took us the same time to film seven as it usually does to film ten, just to give you an idea just how much has been packed into these seven. It’s like, basically we have seven episodes of what’s usually episode nine.”

Jacob Anderson (Grey Worm): “The storytelling is moving at a much faster pace now. But it doesn’t feel like it’s rushing toward a finish line; it feels like the urgency comes from the storytelling. Everybody is on edge.”

Iain Glen (Jorah Mormont): “I think there was a degree of pressure, because the show is so successful, to continue it ad infinitum. I think [showrunners] David [Benioff] and Dan [Weiss] were very strong and clear that they had 13 hours of storytelling left, and that’s what they’re going to stick to. I think that’s brilliant. Certainly the season that’s about to show has that sense of crescendo and moving toward the end game. There’s no treading water at all. It feels like we’re accelerating forward. I think they’re the best scripts they’ve written, the season that’s about to show.”

'Game of Thrones' Season 7: Which Characters Are Likely to Die?

Gemma Whelan (Yara Greyjoy): “Everything is concentrated into a much more densely packed seven episodes. They have lots to tell yet. It moves along. I haven’t seen any of it but I imagine from what we shot and what I’ve heard, it moves at quite a pace. It does feel like everything is collecting together to make the season finale something pretty phenomenal.”

Alfie Allen (Theon Greyjoy): “There’s a real sense of urgency happening now. You can see all these characters joining together, characters who haven’t crossed paths before now meeting up with each other. You can see the end game coming now.”

Indira Varma (Ellaria Sand): “Who’s going to be corrupted by their own ambition, more and more? It’s really exciting. The momentum is building. It’s going to be crazy.”

Bradley: “If you know anything about the way TV works at all, you know The Sopranos did those two shortened seasons and Breaking Bad had that midseason hiatus. As soon as you know you’re doing seven and then six episodes, you know just from the conventions of TV that things are coming to a head.”

Hill: “And please don’t feel cheated. Because you may think you’re only getting seven and six instead of ten and ten, but really, you were only meant to get ten episodes, not thirteen. You’re getting an extra three, rather than less.”

Hannah Murray (Gilly): “It feels like a two-part final season.”