[Warning: This story contains spoilers for the second episode of Game of Thrones season seven, “Stormborn.”]

Well, that’s one way to make a dent in the Targaryen army.

The second episode of Game of Thrones‘ seventh season, called “Stormborn,” culminated in a vicious showdown between the two halves of House Greyjoy. Riding in on his great warship Silence, Euron (Pilou Asbaek) ambushed Yara (Gemma Whelan) and the Iron Fleet as they were sailing for Dorne, where they planned to assemble enough warriors to surround and conquer King’s Landing.

It’s a decisive victory for Team Euron. The Pirate King of the Iron Islands storms onto Yara’s ship with a massive ax in tow, a tribute to a character from the books who did not make it onto the show: Victarion Greyjoy, yet another one of the gruesome Greyjoy uncles, famous for wielding a massive ax in battle and showing absolutely no mercy toward his enemies. Euron channeled that character and then some as he murdered two longstanding characters: Obara Sand (Keisha Castle-Hughes) and Nymeria Sand (Jessica Henwick). The third Sand Snake, Tyene (Rosabell Laurenti Sellers) and Dorne’s de facto ruler Ellaria (Indira Varma) were both taken hostage.

Another hostage in the mix: Yara. After a brutal battle between king and queen, Euron overpowered Yara and proceeded to taunt Theon (Alfie Allen) into fighting for her life. Instead, Theon bailed on the fight, jumping ship and saving himself — a clear sign of the PTSD from his Reek days. Some wounds never fully heal.

Euron and Yara’s battle was a likely outcome for this week, given how close Dragonstone and King’s Landing are to one another. If Euron’s “gift” to Cersei (Lena Headey) was going to be delivering or conquering the rest of the Iron Fleet, then it was always going to be a quick leap toward that conflict. In the season premiere, Jaime (Nikolaj Coster-Waldau) warned Cersei that they looked like the losers on paper. We most certainly agreed with that assessment; it was going to take several hits in order to make any kind of impact on Daenerys (Emilia Clarke) and her forces, given how much power she amassed on her side.

Consider Euron’s gift delivered, then, as he’s severely undercut the Mother of Dragons’ campaign to take the Seven Kingdoms. And consider the cast’s promise of season seven’s epic battle sequences already fulfilled — and we’re only two episodes deep at this point. 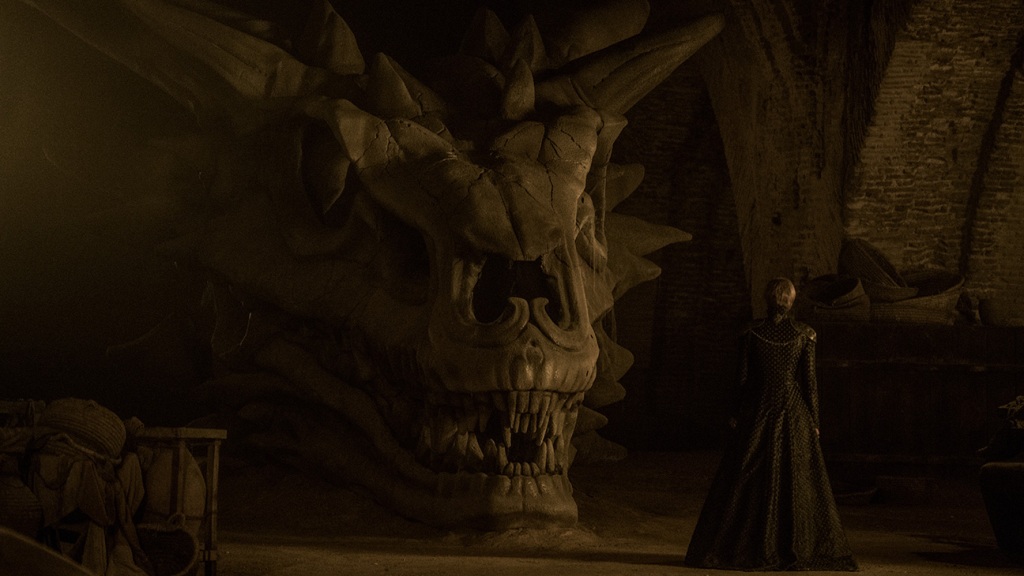 Beyond defeating Yara’s fleet (and leaving Theon stranded in the middle of the ocean) through Euron’s actions, Cersei scored some potential preemptive points against Daenerys in another way: a brand-new weapon against the dragons. Maester Qyburn (Anton Lesser) brings Cersei into the cellars of the Red Keep, where the skeletons of long-deceased Targaryen dragons are stored. He tells Cersei about the time Drogon saved Daenerys from the fighting pits of Meereen, and how the massive beast sustained numerous spear wounds in the process.

With that, he shows Cersei a massive crossbow, one that all of the finest artisan blacksmiths in King’s Landing have been working on tirelessly, day and night. With enough of these weapons on their side, and with enough eagle-eyed soldiers to man them, Cersei and her fellows could very possibly give one of Dany’s dragons the Bard the Bowman treatment. If Jaime was successful in his attempt to win Randyll Tarly (James Faulkner) to his sister’s cause, then the Lannisters won’t be hurting for good archers.

With that said, the Lannisters might suffer injury in another way very soon. Earlier in the episode, Tyrion (Peter Dinklage) outlines a war plan for how best to defeat his sister. The plan involves sending Yara’s fleet to pick up all the soldiers they can from Dorne, while the Dothraki and Unsullied are taken to House Lannister’s ancestral home of Casterly Rock. So much for the first phase, but with any luck, the second wave is already underway, Yara’s defeat notwithstanding.

If nothing else, it’s about time we saw Casterly Rock on the show. Both Thrones the series and George R.R. Martin’s A Song of Ice and Fire novels have thus far stayed away from the famously opulent castle and nearby city of Lannisport. It looks like the opening title sequence is about to add another location to the map very soon. 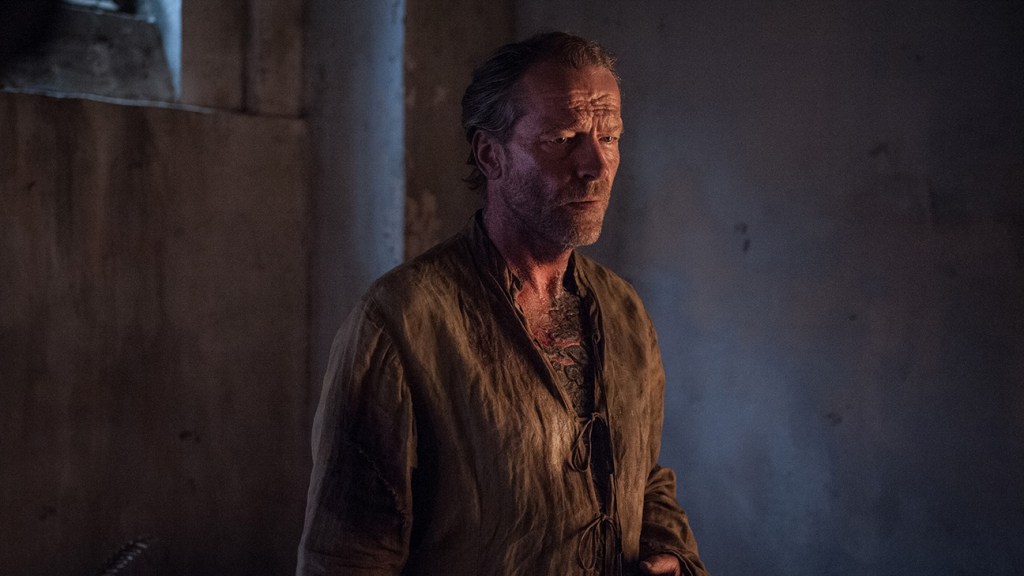 Looking south from Casterly Rock, there’s the Citadel in Oldtown, which featured a sickening scene for the second week in a row. It’s not as disgusting as Sam (John Bradley) scrubbing the bedpans, but it’s not pleasant: Sam operates on Jorah Mormont (Iain Glen), implementing a dangerous and rarely successful procedure to surgically remove all of Jorah’s infected flesh (and there’s a lot of it) and stop the greyscale spread as a result. The practice was long forbidden, but Sam takes it on anyway, due to how much he feels he owes Jorah’s father, the late Lord Commander Mormont.

Whether or not Sam succeeds in the surgery, there’s no doubt that he’s making a crucial ally in Jorah. On the positive side, even if the surgery fails, Jorah still has a healthy life expectancy, according to the Archmaester (Jim Broadbent). In fairness, the Archmaester also warns Jorah that he’ll start to lose his mind within the next six months, a problem he might not even have time to confront depending on the White Walkers’ pace.

With White Walkers in mind, let’s turn to matters of winter, which are very much on the mind of Arya Stark (Maisie Williams). During a brief but wonderful reunion with Hot Pie (Ben Hawkey), Arya learns that her family has conquered Westeros. Between her experience with the Lannister soldiers in the premiere and then learning about her brother’s status as King in the North, Arya finally decides to put vengeance on ice (for now) and head home.

On the way back to Winterfell, Arya reunites with yet another long-lost face from the past: Nymeria, one of only two surviving direwolves from the original pack. In the books, it’s rumored that Arya’s former companion has been running around the Riverlands as the leader of a small army of wolves. The episode takes this idea and runs with it, as Nymeria and several wolves surround Arya in the middle of the forest. Arya tries to convince Nymeria to return to Winterfell, but it’s too late; too much time has passed for these two to reconnect.

'Game of Thrones': A Firsthand Account of the Comic-Con 'Winter Is Here' Activation

If this is the extent of Arya and Nymeria’s reunion, then it’s very much a bittersweet affair, and one with potentially ominous ramifications for Arya. It suggests that after everything Arya has endured, there’s no such thing as truly going home. Even if she physically returns to Winterfell, she’s lost so much of herself that Nymeria, a howling testament to House Stark’s sigil, doesn’t even recognize her. It’s a foreboding prospect, when you start considering which of the surviving Stark children might not survive the series.

Arya’s sister Sansa (Sophie Turner) faces a bittersweet moment of her own: becoming the new Stark in charge of Winterfell, if only temporarily. Jon Snow (Kit Harington) hands Sansa the keys to the North after making the controversial decision to sail for Dragonstone in an attempt to win over Daenerys and make use of the mountain of dragonglass beneath her new stronghold. There’s clear discord among the Northerners, with even Lyanna Mormont (Bella Ramsey) begging Jon to remain in his place. But he’s steadfast in his choice, opting to let Sansa oversee Winterfell and the surrounding areas as he makes his best pitch to Dany. 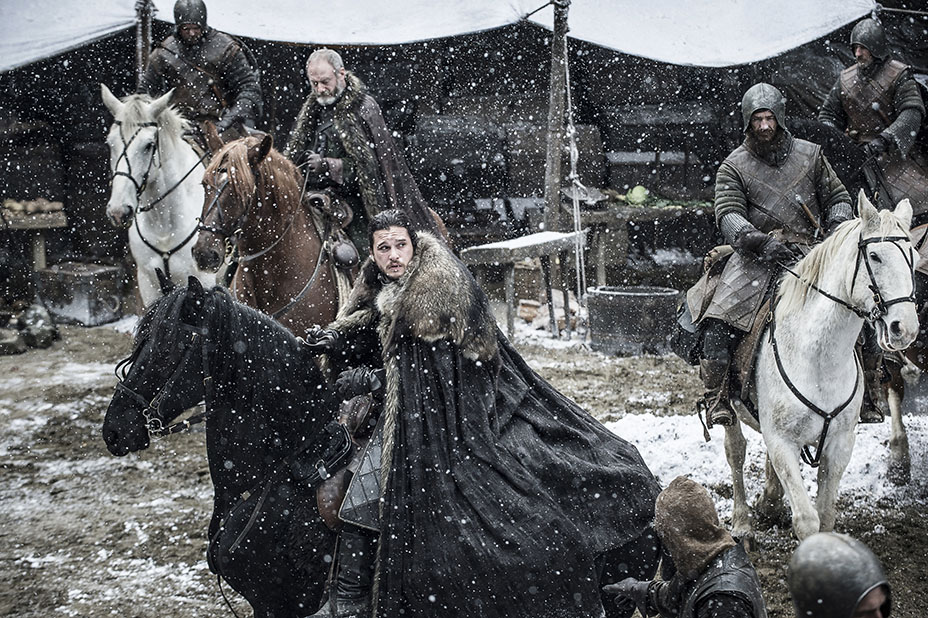 While he acknowledges that he could be walking into a trap (and the fear is valid, since the last time the Starks accepted a Targaryen invitation, it ended with the Mad King burning Ned’s father and brother alive, the final spark leading into Robert’s Rebellion), Jon has reason to trust Daenerys: Her Hand is an old friend. Jon and Tyrion spent the first three episodes of the whole series traveling together to the Wall, and it was always assumed that their preexisting relationship would be the bridge between an eventual Stark and Targaryen alliance. It sure looks like things will pan out in that regard.

For her part, Daenerys extends the invitation to Jon only after Tyrion’s ringing endorsement, paired with a pitch from someone deeply invested in Lord Snow’s success: Melisandre (Carice van Houten). The Red Woman shows up at Dragonstone with a warning: “The Long Night is coming, and only the prince who was promised can bring the dawn.” Apparently, the word “prince” in High Valyrian is gender neutral, and Melisandre believes that both Daenerys and Jon are the foremost figures in the upcoming war against the Night King. Whether or not Dany ultimately agrees? That’s a matter for next week, as the most anticipated meeting in Thrones history will finally commence.

Watch the video below for more on the battles of season seven.

'Game of Thrones': A Historic Meeting Goes Down in the Trailer for "The Queen's Justice"