“We don’t have time for all this.”

In the final-season premiere, Bran Stark (Isaac Hempstead Wright) articulated the frustration felt by some Game of Thrones viewers over the past two weeks as the HBO series inches closer to its endgame. The first two installments of season eight are in the rearview mirror, the shortest episodes of the year by roughly 20 minutes each, with time spent infusing each main character with the proper mixture of hope and dread. The simmering recipe is set to fully boil over in the coming episode from director Miguel Sapochnik, he of “Hardhome” and “Battle of the Bastards” fame. Those who wanted to see Thrones hurry up and deliver sword-swinging action may find themselves regretting what they wished for in short order.

Of course, for his part, longtime Thrones writer and co-executive producer Bryan Cogman won’t say one way or the other regarding his predictions for how the audience will react when the dust settles on the Winterfell war. Speaking with The Hollywood Reporter, he offers up this much of a tease: The battle will be of a size and scale “unparalleled and unprecedented … in the history of filmed entertainment.” Clegane Bowl hype, eat your heart out.

The writer of this past week’s “A Knight of the Seven Kingdoms,” Cogman is one of the many creative forces preparing to say goodbye to Westeros forever. It was not always going to be this way; Cogman was one of the writers tapped to co-create a Game of Thrones successor show. HBO is in the process of casting and preparing a pilot that takes place thousands of years before Thrones, from the mind of writer Jane Goldman. Cogman’s prequel will not be moving forward, according to the writer himself, who signed an overall deal with Amazon Studios last fall.

Cogman spoke with THR about saying farewell through “A Knight of the Seven Kingdoms,” what to expect from the coming battle, and the challenges of ending Game of Thrones without the benefit of George R.R. Martin’s A Song of Ice and Fire novels to light the way.

What were you hoping to accomplish with “A Knight of the Seven Kingdoms,” insofar as it lays track for the remainder of the series?

I think it was important that we took the time to have not only the viewer but the characters themselves take stock of where they are, and reflect on their journeys. That was important, going into this final stretch. There’s a lot of story that happens on Game of Thrones, a lot of plot, a lot of “events.” Certainly, there’s a lot of that in this episode, too. But we really wanted it to be an exploration of the characters, and for me, personally, a celebration of the characters. That’s what makes the show tick. It’s the reason we’re here, all these years later. As much as I love all of the incredible spectacle, if you don’t care about what’s happening within it? Then it’s all a bunch of Sturm und Drang. I was grateful to be given the opportunity to explore where these characters are at this moment in the story, and have the time to do that.

Some viewers have expressed frustration over the pacing of the final season thus far. How do you respond to that?

Look, the show is popular enough that there are plenty of people watching it for different reasons, and that’s fine. If somebody who’s watching wants a bit more action early, then they’re probably disappointed. I think it’s fair to say they’ll get their wish pretty soon.

And may even regret it!

Maybe, who knows? (Laughs.) Ultimately, and I have learned this from [showrunners] David [Benioff] and Dan [Weiss]: We just have to tell the story we want to tell, and feel the rhythm of the story as we’re laying it out. There aren’t any conversations about what people are going to think. If it feels right, that’s what we do. We determined pretty early on that we would explore this idea of, “What would you do if you thought it was your last night on Earth?” It felt appropriate, and even necessary, at this stage in the game — no pun intended. 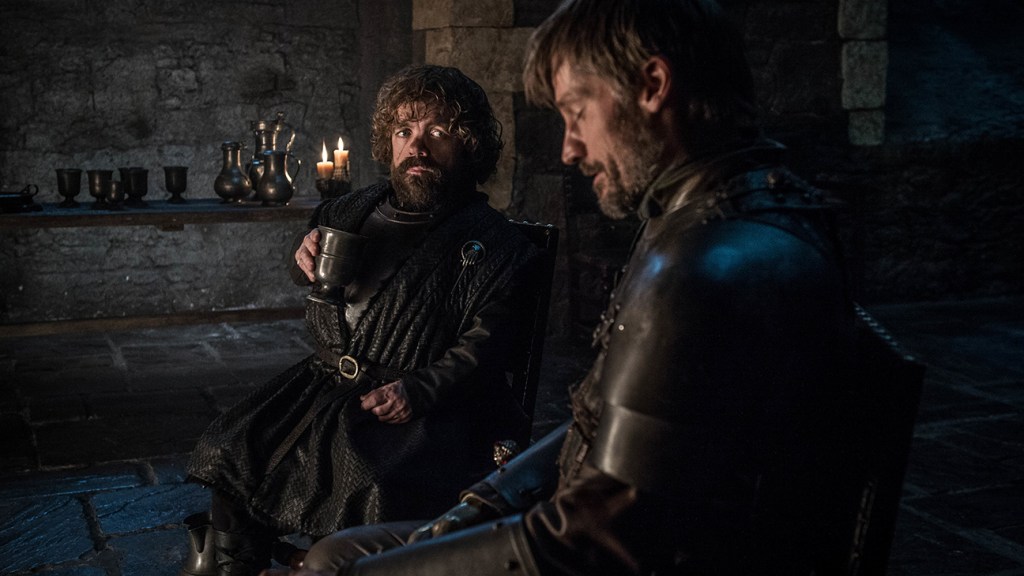 For the bloodthirsty crowd, what should they expect from Sunday night’s episode?

Without getting into spoilers, this is the dread coming to your door. The White Walkers and the Night King are the end personified. Whatever that means to you, that’s what you’re going to see next week.

How do you imagine Game of Thrones nation will react when the credits start to roll?

Truly, I try not to think about how people are going to react. That way lies madness. (Laughs.) I know this is a story we’ve been laboring on for, in my case, almost a decade. This was a part of the story we invested a lot of time in to get right. I can say the effort put in by our crew and our cast in the making of the whole season, but certainly next week’s episode, is absolutely unparalleled and unprecedented — and I’m going to go so far as to say in the history of filmed entertainment.

Game of Thrones is ending before George R.R. Martin finishes A Song of Ice and Fire. As someone who worked on this series for most of a decade, what have been some of the challenges in bringing Game of Thrones in for a landing, only knowing some of what George has in mind for his ending conversationally, not textually?

It was certainly a tremendous challenge, but a very gratifying one in its own way. And it’s important to remember that, yes, we’re finishing Game of Thrones. We’re not finishing A Song of Ice and Fire. It’s going to be finished by George when he finishes it. I always looked at my approach to the writing on the show as, “This [story] happened. These are events that happened in [Westeros] history. We have the history that we have. We as dramatists adapt it for the form that we have.” That’s our thing; it’s a dramatization of [Martin’s] history. You can go back to Shakespeare, and even further back, where you see his histories and how he wrote about the English monarchs. A lot of it is drawn from his own imagination, and a lot of it is from the actual history, and he was writing it to be a play. We’re writing a television show. As such, decisions are made to fit the story we’re telling for the television show. With that in mind, it means that, yes, his text is sacred and his characters are sacred. Where we did invent, we did our best to invent in a way that honors them, but also honors the story we’ve been telling and the experience that our audience has been having. It was a challenge, but it was also really fun and very rewarding in its own way in these back seasons.

Do you feel like you’re saying goodbye to Westeros as Game of Thrones ends, or are you still in the midst of the Seven Kingdoms? You’ve been attached to one of the successor shows. Is that still the case?

I’m definitely leaving. I was developing one of the successor shows with George. George has worked with a bunch of the writers, including Jane [Goldman], whose show is being done [as a pilot]. My prequel show is not happening and will not happen. HBO decided to go a different way. I’m working with Amazon now and helping them out with their shows. So, it is a goodbye. I am done with Westeros. It’s wonderfully bittersweet. I’ll certainly miss it, but I’m excited to go out on my own and try to be in the captain’s chair of my own projects, armed with everything I’ve learned. I’ve learned more than I could possibly imagine from eight seasons of this thing. It’s been wonderful to look back and watch some of the old episodes, and see some of our old friends at the premiere recently, and to know that we’ve done something good. We’ve done good work that people enjoy. That’s all an entertainer can ever hope for. I’m eager to start the next chapter, but a part of my heart will always live with Game of Thrones. That’s one of the reasons why this episode was so important to me. It was a goodbye and a love letter to these characters and to this cast.