And just like that, it’s over: the Night King and the White Walkers are no more, all thanks to one person: Arya Stark (Maisie Williams).

The Night King’s death at the Battle of Winterfell’s climax stands out as one of the biggest jaw-droppers in Game of Thrones history. Very few fans expected the White Walker war to end midway into the final season. Most onlookers expected Jon Snow (Kit Harington) to deliver the killing blow, given his central role in the war against the dead. Maybe Daenerys (Emilia Clarke) would eviscerate the king of the dead with her signature brand of dragon fire. Not so. It’s a Stark who gets the honor, just not the Stark anyone expected — but Arya’s role in killing the Night King and the White Walker threat isn’t without a whole lot of setup.

Director Miguel Sapochnik’s “The Long Night” more than lives up to its title, clocking in at an astonishing 82 minutes, the longest episode of the series and one of the most violent installments at that. The body count is impossible to determine; the number of main character deaths comes in at seven. (Here’s the full list of the dead.) The tides against the united forces of the living turn at each and every bend, with wights pulling a page out of the World War Z playbook and forming undead tidal waves to wash over Winterfell. In the process, significant casualties, brutal injuries and one heck of a showdown.

'Game of Thrones' Final Season: Who Died in the Battle of Winterfell — and Why It Matters

Through it all, Arya Stark tries to survive the assault, sneaking around Winterfell to avoid the dead. Eventually, she requires help from two other warriors: Sandor Clegane (Rory McCann) and Beric Dondarrion (Richard Dormer). The Lightning Lord dies his final death, throwing his body in the line of fire between Arya and the dead. The red priestess Melisandre (Carice van Houten) is on hand to see it all, and she tells Arya that this is why the Lord of Light kept Beric alive for so long — for this very moment, so that he could defend Arya.

It’s the first encounter between Arya and Melisandre since the two women met in season three; back then, the red woman stared into Arya’s eyes and said they were destined to meet again. Destiny arrives on this very long night — and the prophecy Melisandre once uttered about Arya shutting “many eyes forever,” including “brown eyes, green eyes and blue eyes” suddenly makes a whole lot more sense. There’s another familiar refrain that suddenly becomes sharper:

Melisandre: “What do we say to the God of Death?” 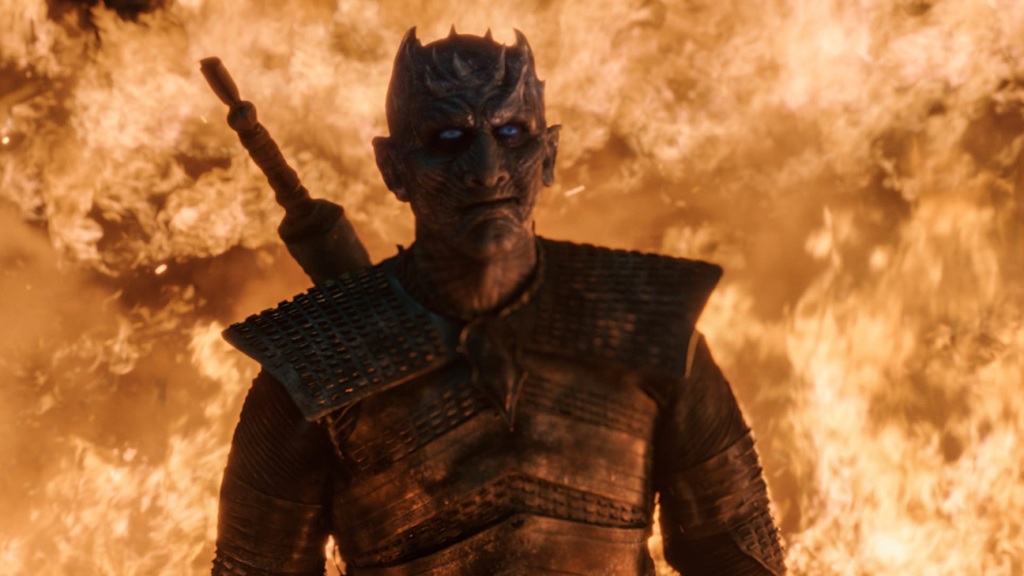 One of the oldest catchphrases in Thrones lore now has incredible new meaning. Back when she was training at the knee of Syrio Forel, the Braavosi water dancer would always say those words to Arya. It has long served as one of Arya’s main mantras. In the context of “The Long Night,” however, it means something different: the Night King and the God of Death are essentially one and the same, bearing down with all its weight on the living at Winterfell — and it’s up to Arya to make sure that weight doesn’t crush everyone today.

Cut to the climactic final moments of the episode, as underlined by series composer Ramin Djawadi. Jon Snow is struggling to reach the Winterfell godswood in order to protect his brother Bran (Isaac Hempstead Wright), who is at the mercy of the Night King. Only Theon Greyjoy (Alfie Allen) stands between the Three-Eyed Raven and the White Walkers, and while he puts up a valiant fight, it’s not enough, as the Iron Islander is easily and predictably killed by the Night King. What is dead may never die, indeed — but as it turns out, what is undead may very much die, thanks to the work of a certain young wolf.

Arya, unseen in the episode since leaving Melisandre, emerges in the thick of the night right before the Night King gets a chance to kill Bran. The ice-eyed monster catches Arya by the throat in midair. For a moment, all hope seems lost, and it appears the Night King is going to get two Starks for the price of one. Instead, Arya drops the Valyrian dagger in her hand and catches it with her other hand, plunging it forward into the Night King’s abdomen. He shatters instantly — and in short order, so do the rest of the dead.

Jon Snow may be Aegon Targaryen reborn, heir to the Iron Throne. But it’s Arya Stark who has spent the entirety of Game of Thrones training under the watchful eye of death. As she said to Gendry (Joe Dempsie) one episode earlier, she knows death intimately, and knows its many faces — what’s one more face between friends? It’s only fitting that she gets to destroy Game of Thrones‘ avatar of death, then — and not only that, she destroys it using the same weapon that started so much of the conflict: the Valyrian dagger once intended to assassinate Bran Stark all the way back in the first season.

The Night King’s death calls back to the first season of Game of Thrones in another way, and indeed, it echoes one of the HBO drama’s oldest traditions: completely shocking and unexpected deaths of main characters. The first season climaxed with the death of then series protagonist Ned Stark (Sean Bean), beheaded with one episode still remaining in the inaugural year. Back then, no one expected to lose such a main character at such a jarring time. It’s only fitting, then, that the apparent endgame villain of the piece dies in the mid-game, with three installments still on the board — plenty of time to bring everything back to the other petty squabbling that has defined so much of the series: the Starks, the Lannisters and the insatiable thirst for the Iron Throne.

And on that note, while we’re speaking of insatiable thirsts… I did encourage you to have some half-drunk hope heading into the battle, didn’t I?

'Game of Thrones' Final Season: How Jon Snow Could Win the War for Winterfell