After skipping and unintentionally dissing “The Last of the Starks,” Dark Words returns for a look back on “The Bells,” director Miguel Sapochnik’s savage episode in which Daenerys breaks bad and razes King’s Landing to the ground. The result: so much death, including thousands of innocents lives, as well as a few major series regulars. Ahead, the 15 greatest quotes from the episode.

Varys (Conleth Hill) owns the spotlight for the first ten minutes of “The Bells,” acting as a cautionary tale for the rest of the episode — and really, for the rest of the series. Here, he’s talking about his plan to take out Daenerys and install Jon Snow as king of the realm, but he may as well be speaking directly for showrunners and writers David Benioff and Dan Weiss, taking an enormous risk in this episode by delivering up the Daenerys Targaryen heel turn.

2. “Every time a Targaryen is born, the gods toss a coin, and the world holds its breath.”

Another Varys quote, ripped straight from the pages of George R.R. Martin’s A Song of Ice and Fire. It’s not the first time we have heard the quote in Thrones, as Cersei said a shortened version all the way back in season two. Still, it’s more than a little bit relevant to our immediately future interests.

And goodbye to you, Varys. These are the Spider’s final words, before being draped in the flames of Drogon — the episode’s first victim of dragon-fire, though certainly not the last.

In the midst of the debates about Daenerys’ turn toward the darkness, Emilia Clarke’s incredible work selling the turn shouldn’t be lost in it all. She’s a hollow shell of her best self throughout the hour, as made painfully clear in her most intimate moment with Jon Snow. If she cannot be loved? Then she will be feared — and Clarke, at least, should be revered. 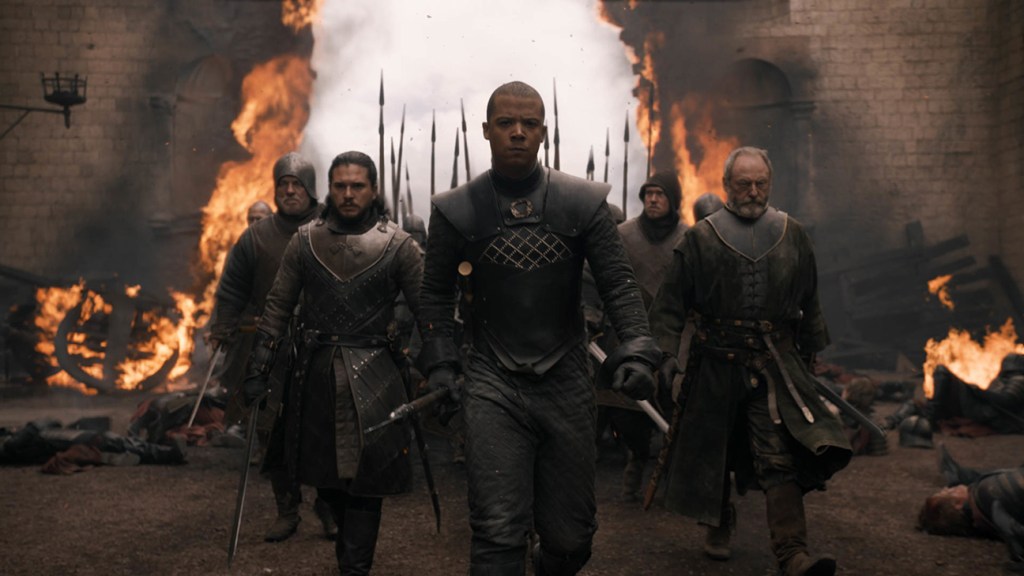 “The Bells” was not a funny episode. This was a funny moment. Tyrion bungling Valyrian is always good for a laugh, and his final bungle with an Unsullied guard was no exception.

6. “If it weren’t for you, I never would have survived my childhood.”

From a good chuckle to a good cry, Peter Dinklage delivers here in his final scene with Nikolaj Coster-Waldau, also delivering as the two Lannister brothers say their final goodbyes. Tyrion and Jaime did not have an easy go of it in the final few seasons, but their connection was always a highlight, and the last beats of their last scene together — a powerful show of love between brothers — will go down for me as one of my all-time favorite character interactions on Game of Thrones, let alone the final season.

Meanwhile, another Lannister, this one deeply out of touch: Cersei, who watches Daenerys’ rampage from afar, smirking and sipping wine as is her wont. It takes a long, long time before reality washes upon her shore. The final season really kept Lena Headey at arm’s length, but here, in her limited role, she truly sells Cersei’s shift from smug to concerned to truly desperate.

There are some moments in Game of Thrones that will stir darkly forever. “Ser Ilyn, bring me his head!” The Rains of Castamere’s opening notes. “Hold the door!” Add another to the list: “Ring the bells,” the trigger Dany needs (needs?) to hear in order to start burning everything in sight. 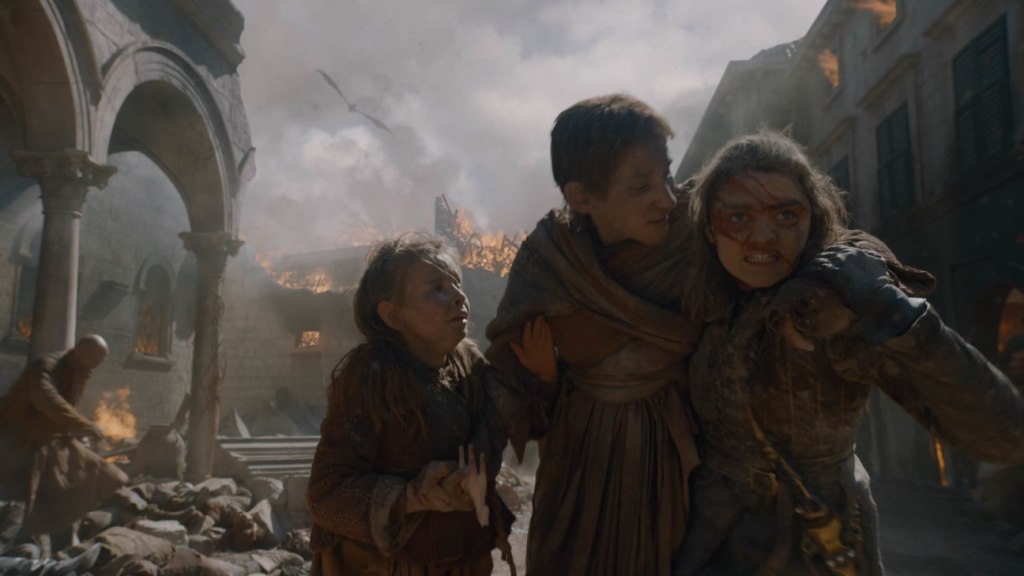 This is the first line-read of substance once Dany’s rampage begins. Jon Snow speaks it, after killing one of his own men, who was in the midst of assaulting an innocent woman. It’s both Jon snapping back into reality, as well as the viewer finding their first moment to maybe, maybe, breathe in the midst of this unfathomable situation.

The Hound (Rory McCann) killed the butcher’s boy, one of the first true and cruel tragedies in Arya’s life. It’s only fitting then that the man who taught Arya her first lesson about death also teaches her a final lesson about life: as in, go and live it. Drop your baggage. Avoid vengeance. Find a thing worth living for, and live for it. It’s not at all what I expected for Arya in the end, but I’m glad it’s what we got. 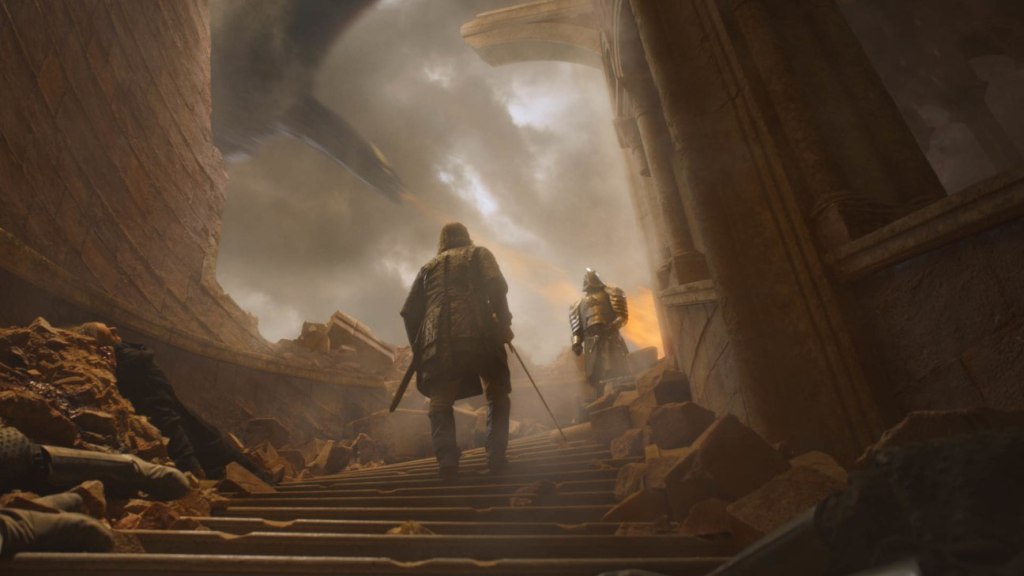 As a Survivor purist, this should bother me. Instead, it tickles me as far as it kicks off and encapsulates the Clegane Bowl, one of the messiest and most pointless fight scenes in Game of Thrones history — the messiness and pointlessness being the messy point, of course.

Immediately followed by the Mountain chucking Qyburn into a wall and down some stairs, leading to the Hand of the Queen’s brains falling right out of his shattered skull. A quick and brutal end to the exiled maester of the Citadel, one that shows off one of the central lessons of Thrones: quick wits are powerful, but power is power.

Goodbye to Jaime and Cersei, who exit the world as they entered it: alongside each other. Was it a fitting end to the Lannister twins, two of the most significant characters in Game of Thrones history? I haven’t fully decided on my feelings about it, but I’m fully decided on how Coster-Waldau and Headey played their last moments in the series together. (They did great, in case it wasn’t clear.)

Take your pick! A lot of wordlessness throughout “The Bells,” much of it a chaotic disaster, much of it an enormous tragedy, and one dialogue-free scene that was an outright delight: Cersei walking past the brothers Clegane, a small moment of comedy that will live on forever, unlike Cersei herself.