Welcome to Final Path, a regular feature leading up to the final season of HBO’s Game of Thrones. In every Final Path, The Hollywood Reporter‘s resident Westeros expert Josh Wigler will offer a character-by-character deep dive of their journey through seven seasons, as well as what can be expected in the upcoming eighth and final season. Up next: Bran Stark.

Before winter arrived, there was Summer.

Outside of Jon Snow’s (Kit Harington) companion Ghost, no direwolf in the Game of Thrones saga was more important than the one belonging to Bran Stark (Isaac Hempstead Wright), the exiled prince of Winterfell on a path toward becoming the all-seeing Three-Eyed Raven. During his journey north of the Wall, Summer acted as Bran’s literal eyes and ears on multiple occasions, thanks to the young Stark’s ability to warg — a form of magic that allows one’s consciousness to transfer into another being’s body.

These days, Summer is long gone, killed by the vicious Night King. Now, the winter battle for the soul of Westeros looms. But even though Summer and other companions are dead or otherwise occupied, Bran himself remains — though what remains of Bran is somewhat unclear. As the new Three-Eyed Raven, Bran’s connection with humanity feels thinner than ever. Ironically enough, he just might be humanity’s best hope for survival.

Despite sitting on the bench for all of season five, Bran Stark stands out as one of the most important players as Game of Thrones heads into its final season. The foundational character of George R.R. Martin’s A Song of Ice and Fire series, Bran is easily one of the most powerful figures in the universe, not the least of which is because of the secret he keeps: Jon Snow’s connection to the Targaryen line and, by extension, the Iron Throne. How will Bran’s secret information and special powers fuel the final season? Read on for those predictions and more in the latest edition of Final Path. 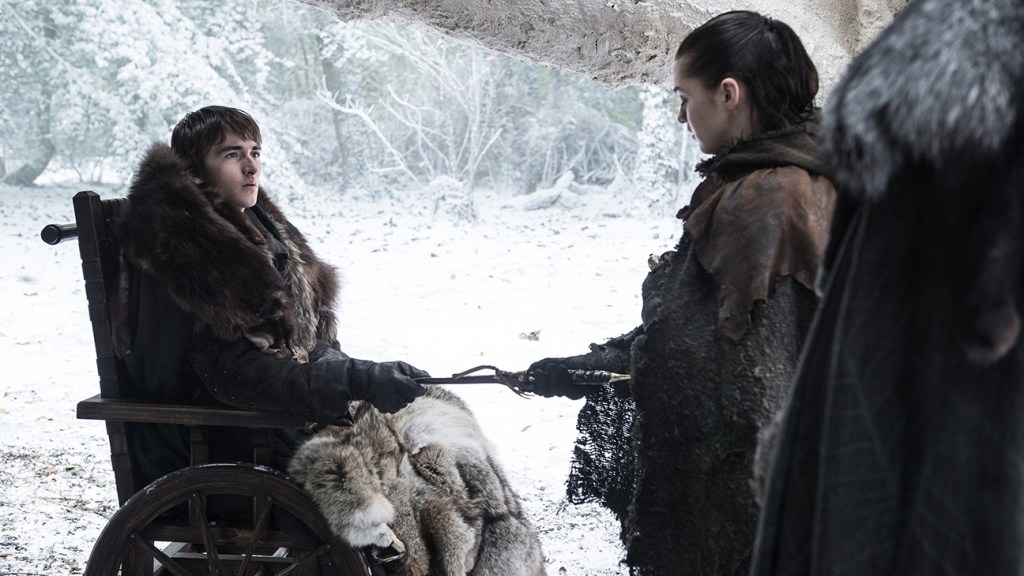 Last Appearance: “The Dragon and the Wolf,” the season seven finale. Much has changed for Bran since his whimsical Winterfell beginnings. As the all-powerful Three-Eyed Raven, Bran has gleaned the truth about Jon Snow’s status as Rhaegar Targaryen and Lyanna Stark’s secret son, making him the heir to the Iron Throne. He has more important matters on the mind now than courtyard games.

Best Friends: Do birds count as friends? Before he became the Three-Eyed Raven, Bran counted many friends in his ranks: Meera and Jojen Reed (Ellie Kendrick and Thomas Brodie-Sangster), Osha (Natalia Tena), Hodor (Kristian Nairn) and the direwolf Summer. All of them are dead or gone now, and even the one still standing — Meera — has been pushed away, thanks to Bran’s increasingly cold attitude as the most powerful mystic in the land.

Worst Enemies: The Night King is at the top of the list for most Game of Thrones characters, and for Bran? No exception. The King of the Dead poses a direct threat on humanity at large, and based on his last encounter with Bran, it would seem he has a specific axe to grind against the Three-Eyed Raven. Expect the bad blood to boil over in the final season, assuming it doesn’t freeze first. 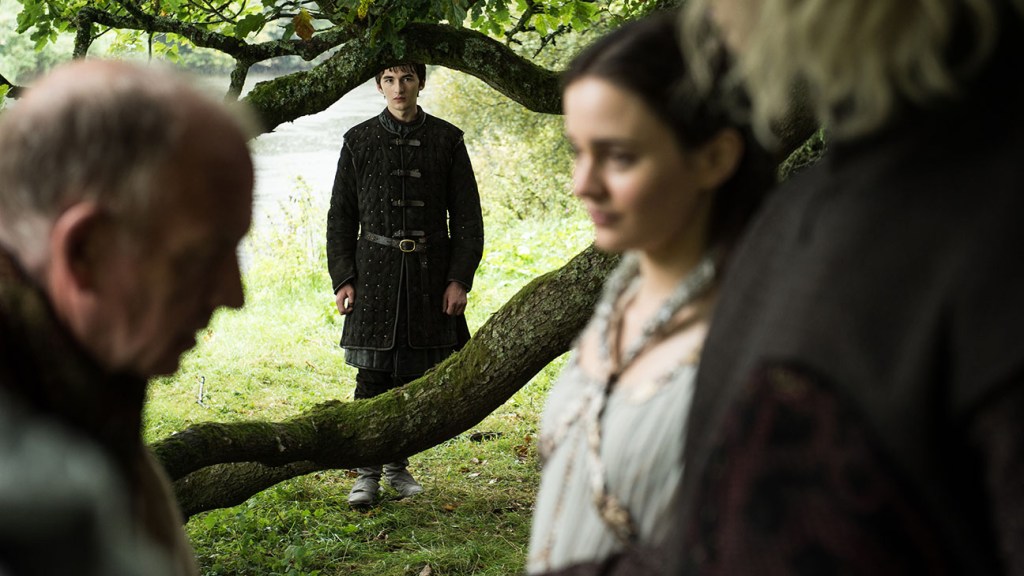 Best Kill: Bran isn’t the most lethal character in the series, despite his powers. That said, he’s put his warging gifts to deadly use on a couple of occasions, most notably when he zapped his consciousness into Hodor, using the lovable giant as a human weapon against Bolton loyalist Locke (Noah Taylor). If you close your eyes and focus, you can probably still picture Bran-as-Hodor snapping Locke’s neck like a twig.

Worst Wound: It’s part and parcel with Bran’s first appearance, albeit a few scenes further on. The series premiere ends with Bran witnessing the incestuous relationship between Cersei (Lena Headey) and Jaime (Nikolaj Coster-Waldau) firsthand. It would have been a traumatic enough wound on its own, but it’s made all the worse after Jaime pushes Bran from a Winterfell tower, paralyzing him from the waist down. Without the incident, Bran would never go on to become the powerful Three-Eyed Raven. Which would you choose: time-bending magic powers, or the ability to use your legs? Your mileage and Bran’s mileage may vary.

'Game of Thrones' Final Path: The Journey of Arya Stark

Critical Moments: Speaking of time-bending magic powers, season six revealed Bran’s ability to trip through time, at least in a manner of speaking. First, he witnessed some of the events at the legendary Tower of Joy, spying on his father as a young man, actively and successfully calling out to Ned. Next, he accidentally zapped Hodor’s consciousness across space and time, creating the feedback loop that caused Hodor to become Hodor. (Once more for good measure: “Hodor.”) Bran went on to witness the birth of Jon Snow, itself a big deal, but perhaps the bigger deal is Bran’s apparent ability to interact with the past — quite likely a deadly weapon for the final war to come.

Unresolved Mystery: Is Bran secretly Brandon the Builder? For those who don’t know the theory, it suggests Bran’s time-traveling hijinks somehow land him in the very distant past, putting him in place to summon the great Wall that divides Westeros from White Walker territory. It’s hard to picture with so little time left on the Game of Thrones clock, not to mention the upcoming prequel series, which is primed to cover this material on its own. No prediction here one way or another, but worth keeping an eye on just in case. (Another, wonkier theory: the Night King is a time-displaced Bran Stark. Officially giving the thumbs down for that one, but putting it out there in case Thrones delivers on this truly out-there twist.) 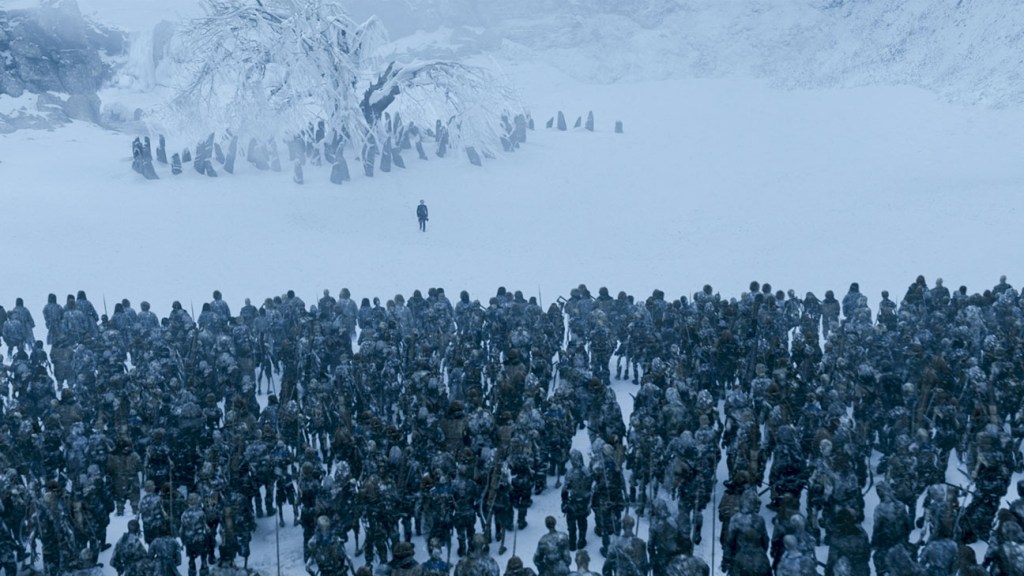 Final Predictions: Everything in Game of Thrones stems from Bran Stark, at least from a certain perspective. He was central to the first scene George R.R. Martin ever envisioned, watching his father execute a Night’s Watch deserter, learning a crucial lesson: “The man who passes the sentence should swing the sword.” Bran was at the heart of the show’s first jaw-dropper, falling from the Winterfell tower, a twist that solidified Thrones‘ deadly stakes several episodes before the Ned beheading. And that’s all before the Three-Eyed Raven of it all entered the picture.

In other words, Bran, like Ron Burgundy, is kind of a big deal. He might not be the flashiest character in the series or the breakout fan-favorite, but whatever’s coming down the pike in the final six episodes, you can guarantee Bran will be at the center of the final action. Jon Snow finding out about his true Targaryen roots? That’s all Bran, with a Samwell Tarly (John Bradley) assist. And the key to taking on the Night King? You guessed it: Bran.

To elaborate, one of the most widely held predictions heading into the final season involves Bran warging into a dragon. During their first face-to-face meeting, the Three-Eyed Raven left Bran with these ominous words: “You will never walk again, Bran, but you will fly.” Maybe Bran’s flight path has already been settled in a manner of speaking through his time-traveling green-sight, or by the fact that he’s traveled by air via raven-warging. But honestly, if that’s it? Not enough. Bran was promised flight, and that means dragon-warging or bust.

'Game of Thrones' Final Path: The Journey of Daenerys Targaryen

So, just to put it out there: Bran will absolutely warg into a dragon before Thrones ends. The stage is already set for such an encounter: Viserion was killed in season seven, raised from the dead as the Night King’s ice dragon steed. Bran using his powers as a warg to hijack Viserion out from under the Night King, paving the way for Jon Snow to best the White Walker commander in hand-to-hand combat, more or less writes itself.

There’s even Bran’s very first scene to consider in the equation. Jon leans into Bran’s ear and coaches him through the archery lesson. Could he provide some similar words of encouragement in this final moment as well? Back then, Jon even evoked Ned Stark’s presence when mentoring Bran’s bow skills. Could Bran get an extra push by tripping back in time, interacting with his father for one last moment of paternal wisdom, before shoring up enough courage to take down the Night King? It would be Game of Thrones‘ answer to Luke Skywalker blowing up the Death Star via Obi-Wan’s guidance. Perhaps it’s no coincidence that Thrones creators David Benioff and Dan Weiss are next set to take on a Star Wars trilogy. (It’s definitely a coincidence.)

Beyond Bran flying as Viserion and taking down the Night King as a result, it’s harder to figure out exactly where the character ultimately lands. There’s the aforementioned Bran the Builder possibility. He could also end up in Winterfell for something of a happily ever after, though given his all-powerful nature, it’s harder to picture. The easier ending to imagine is a somewhat sad one, and the one we’re going to go with: Bran will find a Three-Eyed Raven tree to call his own, watching out over Westeros and the realms of men from his own relative isolation. It’s not the most tragic ending in the world, but it’s certainly a bittersweet one. Then again, Martin has long said he sees his story ending on a bittersweet note; it would make sense for his starting character to play that note to the bitter end.

'Game of Thrones' Final Path: The Journey of Jaime Lannister

Last Hope: For Bran to meet and forgive Jaime Lannister. The final season has a lot of ground to cover, but if there isn’t room spared for Bran meeting the man who crippled him, consider it a huge missed opportunity. For one thing, it’s a chance to humanize Bran again, after his recent turn toward detachment. What’s more, the series has already put the wheels in motion for Bran to give Jaime a fair chance. In season six, Bran briefly saw flashes of the Mad King Aerys on the night he tried to burn King’s Landing to the ground. If Bran has seen the Mad King’s final night, then he’s either seen or has access to the “tapes” of Jaime killing the man, becoming Kingslayer in the process. The fuller picture Jaime once tried to pitch to Brienne? Bran could see it for himself, and find it in him to absolve Jaime more fully. For the sake of a strong showing between Isaac Hempstead Wright and Nikolaj Coster-Waldau, here’s hoping some version of this scene comes to pass.