Game of Thrones is not a happy show. Bad things happen to good people, and with alarming regularity. But sometimes, the characters themselves and the dedicated audience alike are allowed nice things, as was the case in “A Knight of the Seven Kingdoms.” Specifically: the scene from which the episode takes its title, as Nikolaj Coster-Waldau’s Jaime Lannister officially anoints the courageous warrior Brienne of Tarth (Gwendoline Christie) as a knight of Westeros.

The scene occurs toward the end of the hour, written by co-executive producer Bryan Cogman, as both Jaime and Brienne wait for the impending White Walker war in a warm corner of Winterfell. They are surrounded by unlikely friends and family: Tyrion Lannister (Peter Dinklage), Davos Seaworth (Liam Cunningham), Tormund Giantsbane (Kristofer Hivju) and Podrick Payne (Daniel Portman). As Tyrion recalls the various warriors’ most heroic acts of battle, it comes to light that Lady Brienne is not a knight, due to the fact that she is…well, a lady. Unfamiliar with Westeros and its patriarchy, Tormund is shocked at the news. He tells Brienne, the woman of his dreams: “I’m no king, but if I were, I would knight you 10 times over.”

It’s here that Jaime boldly announces that kings are not required in order for someone to achieve knighthood; all that’s required is another knight. With that, he withdraws his sword, asks Brienne to kneel and does the deed.

With that, she arises as Ser Brienne, wildly celebrated by the men in the room, not to mention millions of fans watching at home. It’s among the single happiest moments in Game of Thrones history, and an easy contender for highlight of the episode — one that mirrors an earlier moment of female empowerment between Sansa Stark (Sophie Turner) and Daenerys Targaryen (Emilia Clarke), as the Mother of Dragons admires the Lady of Winterfell’s political prowess: “We both know what it means to lead people who aren’t inclined to accept a woman’s rule, and we’ve both done a damn good job of it from what I can tell.”

It’s also a contender for the best scene between Jaime and Brienne. The previous title-holder also hails from the mind of writer Cogman: season three’s “Kissed by Fire,” in which Jaime and Brienne bathe together, with the “Kingslayer” revealing the secret truth behind his king-slaying story. 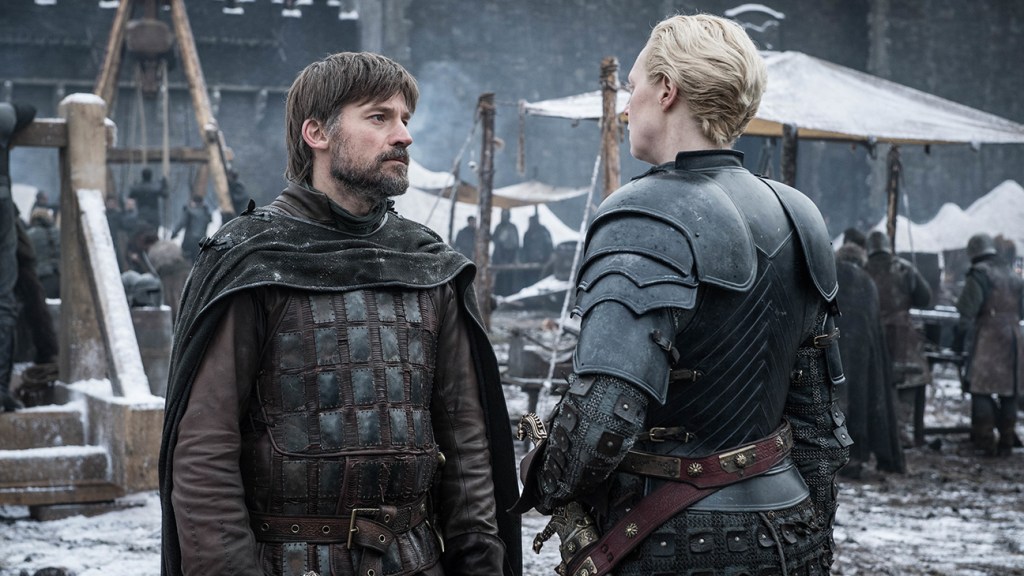 In HBO’s Inside the Episode feature, creators David Benioff and Dan Weiss weigh in on what went into crafting Brienne’s rise as a knight. As Benioff puts it: “Brienne has been more knightly than any of the knights we have seen.” Weiss offers an even more personal touch for what this means for Brienne, and what it means for this moment to come from Jaime.

“She’s a paragon of strength and honor and being true to your word,” says Weiss. “When Jaime knights her, it’s a general kind of validation she’s wanted her whole life. But even more importantly, it’s the acceptance and validation of Jaime, who she obviously has feelings toward that she’s never really come to terms with or even allowed to bubble to the surface of her consciousness — but they’re there all the same and we can see all of those things swirling.”

Will we see Brienne and Jaime’s relationship advance even more, following her knighthood at his hands — er, hand? Quite possibly, based on what Christie previously told The Hollywood Reporter about what to expect from Brienne in season eight.

“What I truly love about this season is we see Brienne explored as a woman,” she told THR, speaking before the season premiere. “She has developed a level of confidence and has evolved through her life, where now, she’s in charge of the decisions she makes. She’s not necessarily giving herself over to an idea greater than herself. It’s about her own wants, needs and desires, too. It’s very interesting, where that takes her, and what she experiences from that.”

Good news for fans hoping to see Brienne survive the impending battle at Winterfell, right? Based on how Christie describes things, we are still going to see Brienne of Tarth pursue her own “wants, needs and desires,” a hard mission to accomplish in the midst of a fight against the Army of the Dead. Then again, in the hype machine surrounding episode three, it’s been noted that the action-packed battle at Winterfell was designed to feature a litany of character-enriching moments. It’s entirely possible that Brienne can still find time to pursue her desires while also perishing in battle — specifically, in the sad event that she dies saving the man she loves.

In the run-up to the final season, THR made the official prediction: Brienne’s death will come at some point in these remaining episodes, and the big Winterfell war feels as likely a place as any for such an occasion to pass. More than happy to be proved wrong on that front. In any event, let’s not worry about that possibility until we absolutely must. To paraphrase what Tyrion said in the moments before Lady Brienne became Ser Brienne: “I think she might live.” Try not to laugh, Ser Seaworth.

'Game of Thrones' Final Path: The Journey of Brienne of Tarth