Welcome to Final Path, a regular feature leading up to the final season of HBO’s Game of Thrones. In every Final Path, The Hollywood Reporter‘s resident Westeros expert, Josh Wigler, will offer a character-by-character deep dive of their journey through seven seasons, as well as what can be expected in the upcoming eighth and final season. Up next: Bronn.

Some sixty-odd episodes ago, in a cold castle chamber tucked far away in the mountains, a knight lost his life. It was not the outcome anyone expected; the man was well armored and armed, honorable to the core. The killer, on the other hand, was armed with nothing more than a modest sword and some very fancy footwork — not to mention a complete abdication of the knight’s fatal flaw: honor. Not a drop of it to spare.

It wasn’t the first appearance of Bronn, the sharp-tongued sellsword played by Jerome Flynn, but it was certainly his breakout appearance: fighting for a very rich man he had only just met, all on the promise of an eventual lofty reward. Since those days, Bronn’s fortunes have hit peaks and valleys. He was in command of the King’s Landing city watch at one point. He was a hero during the Battle of the Blackwater. He coached a one-handed knight back into fighting shape. He also was forced to visit Dorne. The less said about that, the better.

As the final season approaches, Bronn stands out as a wild card, one of the reliable spices in the Game of Thrones cabinet that always punches up the flavor — but not a necessary ingredient, necessarily. As so many stories are set to converge on one another in the final six episodes, what more does Bronn have to offer to the proceedings, aside from his signature wit and fighting style? Perhaps that’s all he needs to contribute, frankly — in any case, our predictions for the man are ahead, as well as a look back on his journey thus far, in the latest edition of Final Path. 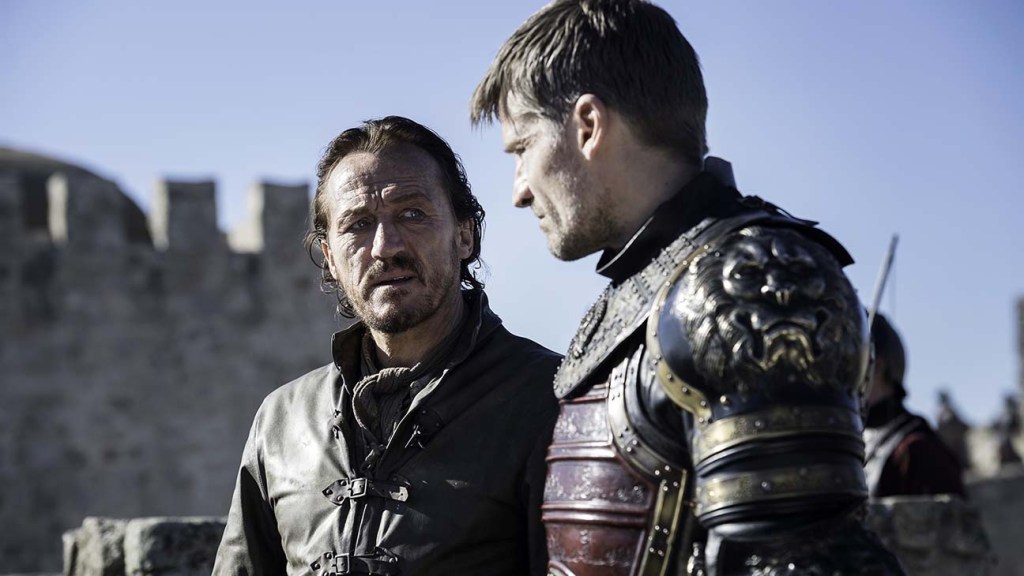 Names and Titles: Bronn of the Blackwater, Son of You Wouldn’t Know Him.

First Appearance: “Cripples, Bastards, and Broken Things,” the first season’s fourth episode. Stop us if you’ve heard this one: Tyrion Lannister (Peter Dinklage) walks into a bar, and within minutes, he’s placed under a veritable citizen’s arrest by Catelyn Stark (Michelle Fairley) for a crime he did not commit. Among the arresting officers: a sellsword by the name of Bronn, who happened to be at the exact right place at the exact right time — assuming he ends up getting the mountain of gold he’s owed at the end of the series.

Last Appearance: “The Dragon and the Wolf,” the season seven finale. Bronn greets the men and women from the Targaryen-Snow alliance as they arrive at the Dragonpit. Although we already saw Bronn and Tyrion together again two episodes earlier, the Dragonpit lead-up includes the first true dialogue exchange between the old friends since season four — a nice reminder that even if Jaime (Nikolaj Coster-Waldau) and Cersei (Lena Headey) sign Bronn’s paychecks, they aren’t his favorite Lannisters.

Best Friends: Bronn, much like Goldmember, loves gold. All others fall far shorter than money in the friendship hierarchy. With that said, Bronn is a big fan of Tyrion, and has grown a friendship with the Kingslayer as well. He’s rather fond of Podrick Payne (Daniel Portman), too.

Worst Enemies: Anyone who stands in the way of Bronn and his money — and at the moment, that means dragons. Bronn and the fire-breathing children of one Daenerys Targaryen (Emilia Clarke) do not exactly see eye-to-eye. In the wake of Jaime’s decision to join the Targaryen army, however, Bronn may be whistling a different tune soon. If so, he may soon find White Walkers are an even frostier thorn in the side. 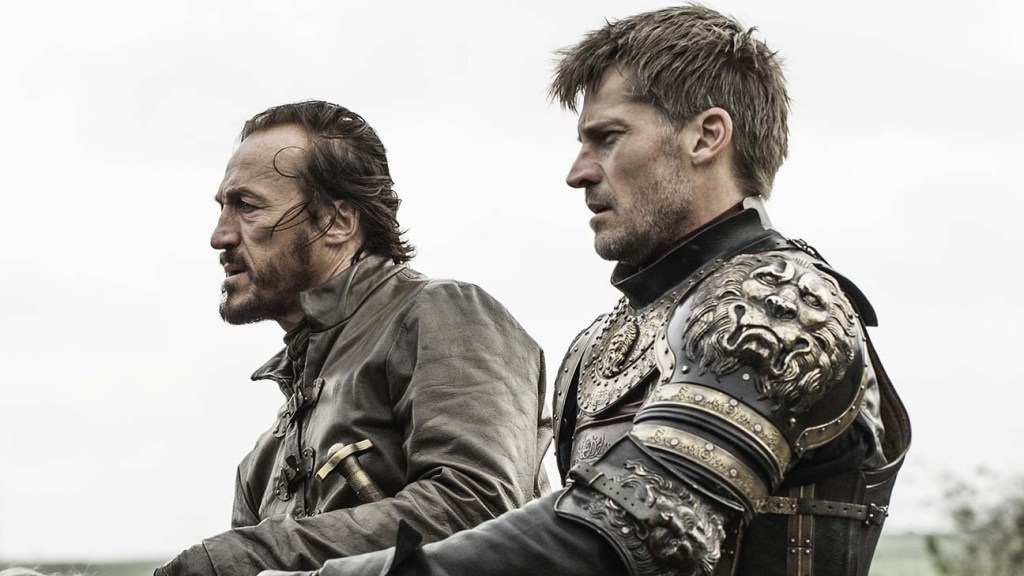 Best Kill: There’s a lot to choose from, whether it’s the Dothraki rider he skewered in “The Spoils of War,” or the Stannis Baratheon (Stephen Dillane) loyalists he incinerated with an arrow-triggered wildfire explosion during “Blackwater.” But let’s go with a classic: his death match against Ser Vardis Egen (Brendan McCormack) in season one’s “A Golden Crown.” Refresh yourself, if you haven’t seen the fight in a while. Incredible scene.

Worst Wound: Temporary poisoning at the hands of Tyene Sand (Rosabell Laurenti Sellers), “the most beautiful woman in the world,” according to herself and Bronn’s forced testimony. Honestly, let’s not revisit Dorne any more than necessary.

Critical Moments: Bronn has been at the heart of some of the greatest action scenes in Thrones history: “Blackwater” and “The Spoils of War.” If it’s not a huge battle scene, it’s a rare season that passes without Bronn at least breaking out the sword for a dance or two. He’s the reliable foil for any Lannister sibling, save for Cersei thus far — though there’s still time to fix that, as the King’s Landing story is lacking a bit in the compelling character department. If one has to boil Bronn down to a single moment, though, it’s the aforementioned fight against Ser Vardis in the Vale. It immediately struck to the core of the character, a man who takes calculated risks for big rewards — but rarely, if ever, makes a bet he doesn’t feel he can win.

Unresolved Mystery: There isn’t much mystery when it comes to Bronn, though there is one thing lingering from an earlier note in the series: Bronn once traveled north beyond the Wall. What did he see there, and will it come in handy for the final season? 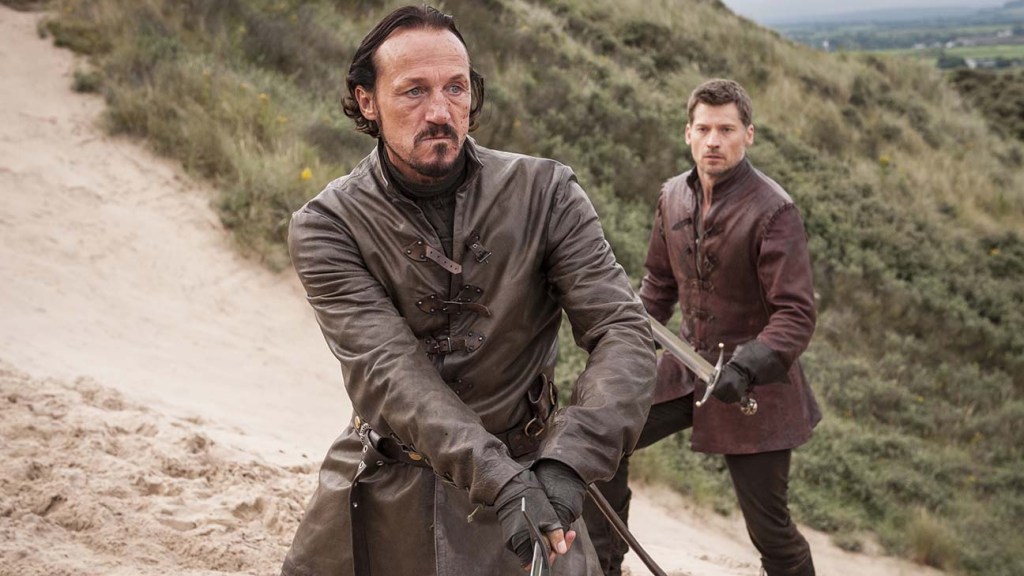 Final Predictions: Bronn’s trip over the Wall won’t matter too much in the final season, except that it might mean he has a connection or two with some of the Free Folk. Could he have paid a visit to Craster’s Keep in the past? Then perhaps Bronn will recognize Gilly (Hannah Murray) if he makes it up to Winterfell. What about Tormund Giantsbane (Kristofer Hivju), confirmed to have survived the fall of Eastwatch, thanks to the season eight trailer? The idea of Bronn and Tormund already having some established rapport is very exciting indeed.

More than anything, Bronn’s one-time mission beyond the Wall serves as groundwork for his future with the series — namely, that the man will ride north to Winterfell, either alongside Jaime Lannister or shortly afterward. There’s really no reason for him to linger behind in King’s Landing, except that the Cersei storyline lacks in the way of standout figures (with respect to Anton Lesser’s underrated Maester Qyburn). It’s fun to imagine Bronn becoming Cersei’s confidant in the way he became close with both Jaime and Tyrion, but also hard to imagine, since both of his preferred Lannister siblings are fighting the good fight against the White Walkers.

Why is there any reason to bet against Bronn joining back up with Tyrion and Jaime, anyway? From a mercenary perspective, he has to bank on the idea that the forces of the living will survive against the Army of the Dead, or else there’s no point in fighting at all. Better to keep Jaime alive, even in the face of impossible odds, much as he did during “The Spoils of War,” when he knocked Jaime off his horse in order to evade incineration by dragon fire. Bronn draws the line at dragons, as he says, but what if he’s on the dragons’ side? Still, he’ll have to answer for shooting a gigantic arrow into Drogon’s shoulder — but that’s an Areo Hotah punch to the face compared to the greater price of mankind’s destruction, should he opt out of the big battle.

So, no bold predictions, but here’s one you can set your clock to: expect Bronn at the Battle of Winterfell. This is a character who rarely misses out on the major war scenes, and the biggest fight of all Thrones lore should be no exception. Whether or not he’ll survive? He’s an expendable player on the board, given his lack of story weight — weight he could earn if he suddenly decides to step up and save one of the Lannister brothers, only to lose his life in the process. But sweet as the sentiment is, that’s not Bronn, is it? He’s a survivor, through and through; betting against his continued existence through the endgame feels like a mistake.

Last Hope: For Bronn to live through the series finale and earn the hefty payday and castle he’s been working toward all along — and for it to be the veritably haunted Harrenhal. If anyone can reverse the castle’s curse, it’s Mr. Of the Blackwater.