In his final hours, Varys the Spider (Conleth Hill) meets Jon Snow (Kit Harington) on the sandy shore of Dragonstone, offering words that prove prophetic for the very near future: “They say every time a Targaryen is born, the gods toss a coin and the world holds its breath.”

It’s not the first time these words are uttered on Game of Thrones, as they date as far back as season two’s “A Man Without Honor,” first spoken by Cersei Lannister (Lena Headey). In author George R.R. Martin’s A Song of Ice and Fire novels on which David Benioff and Dan Weiss’ Thrones is based, the veritable prophecy is first shared by Barristan the Bold, long since dead in the HBO adaptation. There’s always been clear truth to these words, just looking back into the House Targaryen history books: the dragon-blooded rulers of Westeros have wildly differed from one another in temperament, with some as wicked as the Mad King Aerys and others as kind as Jaeharys the Wise.

For so much of Game of Thrones, Daenerys Targaryen (Emilia Clarke) has straddled the line between fiery fury and righteous justice — but even the kindest of her titles, “Breaker of Chains,” comes with some measure of menace. The menace became fully unleashed and the gods’ tossed coin landed firmly on madness in director Miguel Sapochnik’s “The Bells,” the series’ destructive penultimate installment. In it, there’s little room left for ambiguity: Daenerys has conquered King’s Landing by virtually burning it to the ground, a move that puts her in the same company as her own mad father, who long ago tried and failed to do the same.

Benioff and Weiss’ vision of Daenerys has taken this “mad” plunge, but it remains to be seen how Martin plans to resolve her storyline when or if he finishes his novel series. As far as the creators of the Emmy-winning series, Daenerys’ turn toward the dark side was something they tried to seed as early on as the first season, based on their comments in HBO’s latest “Inside the Episode” feature.

“There is something chilling about the way Dany has responded to the death of her enemies,” says Benioff, who points to the death of her own brother Viserys (Harry Lloyd) as a specific example. “Even when you look back to season one when Khal Drogo (Jason Momoa) gives the golden crown to Viserys, and her reaction of watching her brother’s head melted off. He was a terrible brother, so I don’t think anyone was crying when Viserys died, but…” 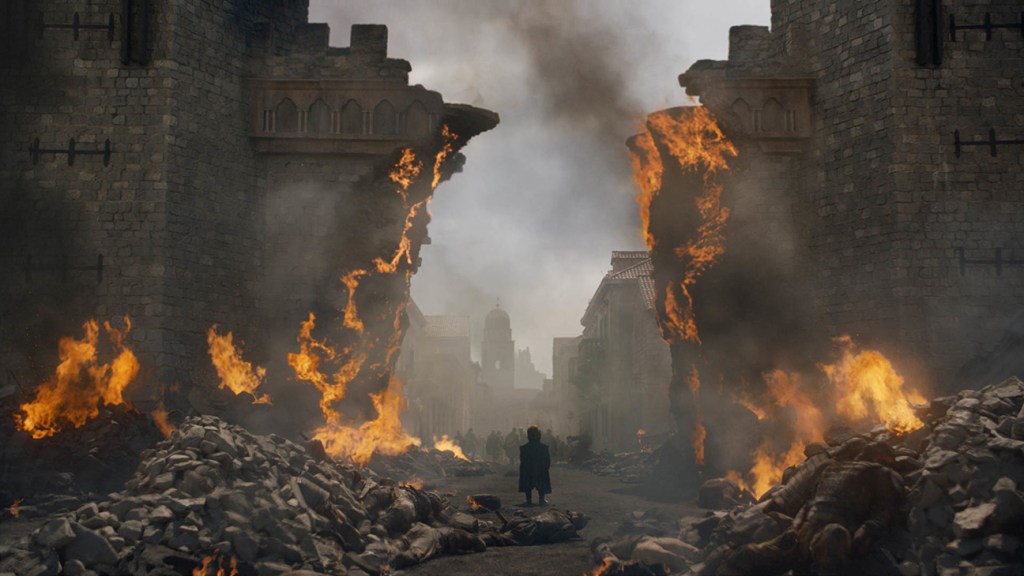 Daenerys did not kill Viserys, but she didn’t flinch when he died gruesomely before her very eyes. As for the people Dany did kill along the way, without so much as batting an eye, the list includes:

• Xaro Xhoan Daxos (Nonso Anozie) of Qarth, and Dothraki handmaiden Doreah (Roxanne McKee), both of whom Dany locks away in a vault without food, resources or any real hope of survival — only emptiness, and the certainty of a slow death.

• Kraznys mo Nakloz (Dan Hildebrand), betrayed and burnt alive by the Mother of Dragons in one of her earliest and cleverest acts of war. In Dany’s defense, the Astapor slavedriver absolutely earned his fiery fate, though she was clearly energized by the act of violence.

• Khal Moro (Joe Naufahu) and his fellow Dothraki warlords, all of whom Dany trapped inside a grass building and burned alive, after delivering an extensive monologue about her worthiness as a ruler.

• Varys the Spider (Conleth Hill), killed at the start of “The Bells,” executed by dragon-fire due to his treasonous choice to back Jon Snow. Again, in Dany’s defense, she did once warn Varys what would happen if she ever caught him in an act of betrayal; consider the threat fulfilled.

Daenerys’ deadly deeds are well-documented, then, as is her repeatedly stated desire to free the world from tyranny, to make sure all chains and wheels of power are well and fully broken forever. How do those attributes square up with Daenerys as a warrior queen who burns a city to the ground, roasting so many innocent lives in the conquest? It’s a hard question, one that will certainly tarnish the Mother of Dragons’ legacy in the eyes of many Thrones viewers. Here’s Weiss’ attempt at an answer, once again from the “Inside the Episode” feature: “I don’t think she decided ahead of time that she was going to do what she did. Then she sees the Red Keep, which is to her the home that her family built when they first came over to this country 300 years ago. It’s in this moment on the walls of King’s Landing where she’s looking at that symbol of everything that was taken from her, when she makes the decision to make this personal.”

Benioff offers some thoughts on the matter as well: “If circumstances had been different, I don’t think this side of Dany ever would have come out. If Cersei hadn’t betrayed her [in the agreement to fight the White Walkers], if Cersei hadn’t executed Missandei (Nathalie Emmanuel), if Jon hadn’t told her the truth… if any of these things happened in a different way, then I don’t think we’d be seeing this side of Daenerys Targaryen.”

Do these explanations satisfy? Varying mileages, and all that. For her part, Emilia Clarke spoke with The Hollywood Reporter before the final season and offered this glimpse into the future: “It’s the car crash of every emotion you can possibly imagine. It’s like a nuclear bomb. It’s just going to be fucking huge. Seriously!” At the very least, all Game of Thrones viewers can agree upon one thing: it was a lot like a nuclear bomb, indeed.

Watch Benioff and Weiss’ explanation of Dany’s above.

'Game of Thrones' Final Season: Who Will Win the Iron Throne?