The Lannisters infamously sent their regards to House Stark in “The Rains of Castamere,” better known far and wide to Game of Thrones viewers as the Red Wedding. The architect of those deadly killings? In the GOT television universe, most blame goes to Tywin Lannister (Charles Dance) and Walder Frey (David Bradley). Outside of it, author George R.R. Martin first concocted the brutal twist in his 2000 novel A Storm of Swords, and Thrones creators David Benioff and Dan Weiss adapted the horrible moment. Behind it all: director David Nutter — the same man responsible for the final season’s most uplifting and gutting moments through four episodes.

With the exception of Miguel Sapochnik’s “The Long Night,” every minute of the final season thus far has come from Nutter’s directorial eye — including the two most recent killings. The twin deaths of Rhaegal and Missandei (Nathalie Emmanuel) may not achieve the instantly iconic status of the Red Wedding, but they provide another critical impact: fueling the fury of Emilia Clarke’s Daenerys Targaryen, who enters the final two episodes of Thrones with vengeance against Cersei Lannister (Lena Headey) very much in her heart.

“In that last shot of Emilia, you can see why she’s such an amazing actress,” Nutter tells The Hollywood Reporter about the closing moments of “The Last of the Starks,” in which Daenerys’ face contorts upon watching her best friend, Missandei, lose her life. “You see how her face actually morphs based on how she’s feeling. It went from this aghast energy to her responses taking shape into anger and strength. There’s so much anger at the very end. It was so apparent, the anger she built into it, that I was actually afraid of what she was going to do next.”

According to Nutter, finding that moment and others like it was all about harnessing a secret ingredient — and no, it’s not coffee. (“I’ll let HBO respond to that,” is Nutter’s polite reply when asked about the now infamous modern beverage that found its way onto Thrones.) Instead, it’s something a bit more intangible: time.

“It was really important that we gave the actors all this time to rehearse before they got to set, because sometimes they get to set and so many things are going on — the crew is doing this, the crew is doing that — that the actors can lose their perspective,” says Nutter, whose episodes “Winterfell,” “A Knight of the Seven Kingdoms” and “The Last of the Starks” all involve dialogue-heavy, character-rich moments.

“Before all the actors got together and we read through the scripts, I went to the casting director and talked about the rehearsal schedule. I went back to my desk and typed up every sequence, every rehearsal, and for the next four days, we rehearsed the actors either in the sets they were shooting in or with a table and a chair — whatever we needed in order to establish the sequence. I took all the actors and all the sequences and blocked them all out. I invited David and Dan to come to all the rehearsals so they could see everything that was happening. They were happy with the blocking I’d suggested, and they made their suggestions where they needed to, and the cameraman, David Franco, was there as well. That way, when we got to the [day of the shoot], all the actors knew their blocking and we could get right down to business shooting.” 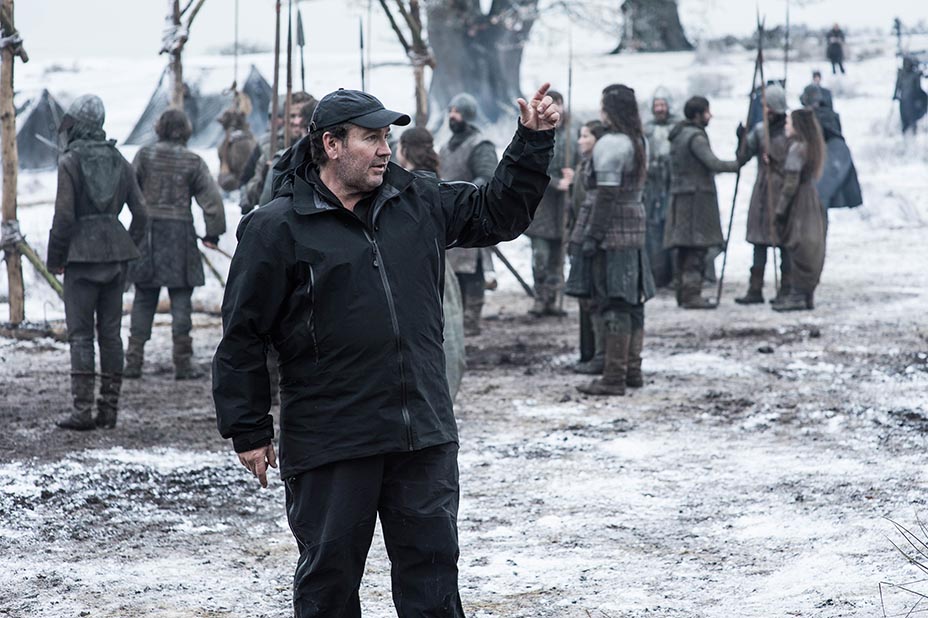 Nutter points to the scenes between Jaime Lannister (Nikolaj Coster-Waldau) and Brienne of Tarth (Gwendoline Christie) as having benefited from the time spent rehearsing ahead of the shoot — from the first encounters between the characters in “A Knight of the Seven Kingdoms” all the way through their first love scene in “The Last of the Starks.”

“It’s one of the first things we rehearsed,” Nutter says about Jaime and Brienne’s first kiss. “It was really special. It was so sweet and kind. It was almost like Jaime Lannister, who is supposed to be this Kingslayer, becomes this little boy. There’s a real sense of sweetness in him that I felt Brienne had always seen in Jaime.”

The time Nutter spent investing in the actors did not go unnoticed by the actors themselves. Several of the cast members who have spoken with THR throughout the final season have made it a point to sing the director’s praises without any prompting, including Tormund Giantsbane actor Kristofer Hivju: “Because [Nutter] had been on the show for such a long time, he really knows the characters, and it was a huge pleasure to work with him and to get to play with him.” Reflecting on the scene in which Jaime knights Brienne in the appropriately titled “A Knight of the Seven Kingdoms,” Christie tells THR that Nutter called upon the crew to uproariously cheer and applaud the actress, directly resulting in Brienne’s memorable smile: “It was the crew I’ve worked with for seven years. These are people who taught me how to act, who have supported me and have made me laugh and are my friends. It made the moment larger than just a scene.”

These kinds of stories about Nutter are spread far and wide throughout the Thrones cast, even among those who are no longer with the series. Following his season six exit from Thrones, actor Michael McElhatton spoke with THR about his character Roose Bolton’s demise and took the time to recall working with Nutter on the infamous Red Wedding.

“We rehearsed it like a play, which is very unusual,” McElhatton said in May 2016. “You normally direct in segments, and all of those things. As actors, from the very start with the camera panning up toward us, with me talking to Catelyn [Michele Fairley] smiling, and Walder Frey talking, right up to the death of Michele, we ran the whole scene. It was all blocked out. That took a day to work out. That was to show the actors and to show the crew what was going to happen. It was a very rare thing [to be] done on film, and a huge advantage. We knew where we were in the story and how it was going to unfold. Each day, David said, ‘We’re going to do it up to this point on Monday, Tuesday, Wednesday, Thursday and Friday.’ It was a tremendous advantage.”

The man who rigorously rehearsed the Red Wedding, which led to so many dead Starks, is responsible for yet another Stark death in the final season, albeit an existential one: Kit Harington’s Jon Snow, whose identity as Ned Stark’s son shatters on learning the truth about his Targaryen roots. Nutter said he spent time with Harington distilling the scene in which Jon finds out about his parents from John Bradley’s Samwell Tarly, all by boiling it down to a crucial question.

“Who’s telling him?” said Nutter. “Sam is the person on the planet Jon is closest with aside from his family. He’s someone he’s always trusted. It’s a situation where the phrase comes to mind: ‘Consider the source.’ As Jon, Kit had to realize the person telling him this information would never lie to him and would always be able to back up [what he’s saying]. But it was also important that no matter who told him, Kit as the character would be ready to drop him; he’d be ready to fight back. There’s a big moment when Sam tells Jon the information, then Jon walks right up to Sam, and Sam’s like, ‘Holy moly. What’s he going to do to me now?’ It was important that we sold the intent there.” 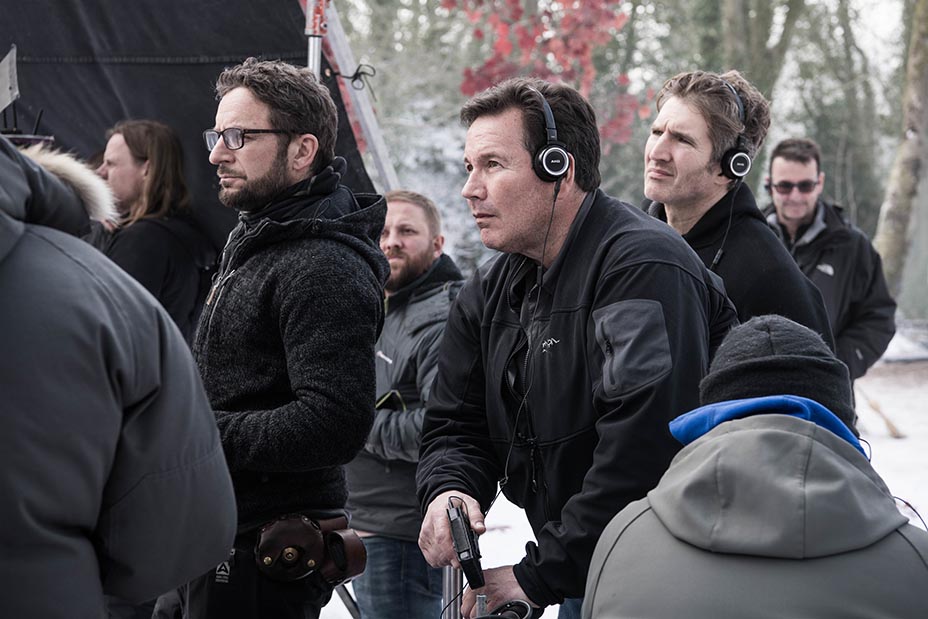 As a further example of selling deadly intent, we return to the Red Wedding director’s final beheading: Missandei, killed at the end of “The Last of the Starks.” The scene sees the Targaryen army at the gates of King’s Landing, with Cersei and her forces standing atop the walls, staring down from high above. The distance between the queens Daeenerys and Cersei creates much of the scene’s tension. Working with the actors on distilling their dread, however, required Nutter to bridge the gap.

“The Cersei contingent was somewhere in the area of 40 or 50 feet in the air and hundreds of yards away,” he says, “so we built a smaller rooftop set that was much closer to the ground, so the actors could react to the other players in a much closer vicinity, and you can actually have some eye contact. It was important to keep it so the top of the roof was only about eight feet up in the air. When we shot our heroes — Dany, Tyrion [Peter Dinklage], Varys [Conleth Hill] and Grey Worm [Jacob Anderson] — I made sure Cersei and Missandei were at a much lower height and were much closer [to the other actors]. It was really important that we got some eye contact and some sense of connection, so there wasn’t so much distance for what you saw in the episode itself.”

The result of closing the distance: a front-row view into yet another horrific act of violence in Westeros, one that’s set to ignite the series’ fiery final act. When the last remaining dragon takes flight and the scorpion bolts soar after him, keep in mind the other special effects in play: the actors, pushed to their final season breaking point in no small part thanks to Nutter’s last three rounds in the Game of Thrones director’s chair.

“He was patient, kind and gentle,” Christie says about Nutter. “He took the time to coax performances out of people. I’m really hugely grateful. I had a wonderful time working with him. He really moved me on as an actor. I couldn’t be more delighted to have had that experience on the final season of this amazing show.”