Welcome to Final Path, a regular feature leading up to the final season of HBO’s Game of Thrones. In every Final Path, The Hollywood Reporter‘s resident Westeros expert, Josh Wigler, will offer a character-by-character deep dive of their journey through seven seasons, as well as what can be expected in the upcoming eighth and final season. Up next: the dragons — Drogon, Rhaegal and Viserion.

Before it was Game of Thrones it was A Song of Ice and Fire, author George R.R. Martin’s name for the epic novel series about Westeros. Jon Snow (Kit Harington) and his side of the story in the North brings the ice. The fire? We know where that comes from, too.

Daenerys Targaryen (Emilia Clarke) and her dragon-riding conquest through Essos was the major parallel storyline throughout the first six seasons of Thrones, until the day came that she and her fire-breathing children finally arrived in Westeros proper. The winged creatures have soared high above the Seven Kingdoms ever since — and one of them now flies for a new master.

Among the single most iconic aspects of Game of Thrones, the dragons are bound to have as massive an impact on the endgame as any of the human characters — more so, in many cases. It’s only fair to give them a final look back and forward, then, as we enter the last remaining days before Game of Thrones’ return. With that said, fly with us on the Final Path for Drogon, Rhaegal and Viserion. 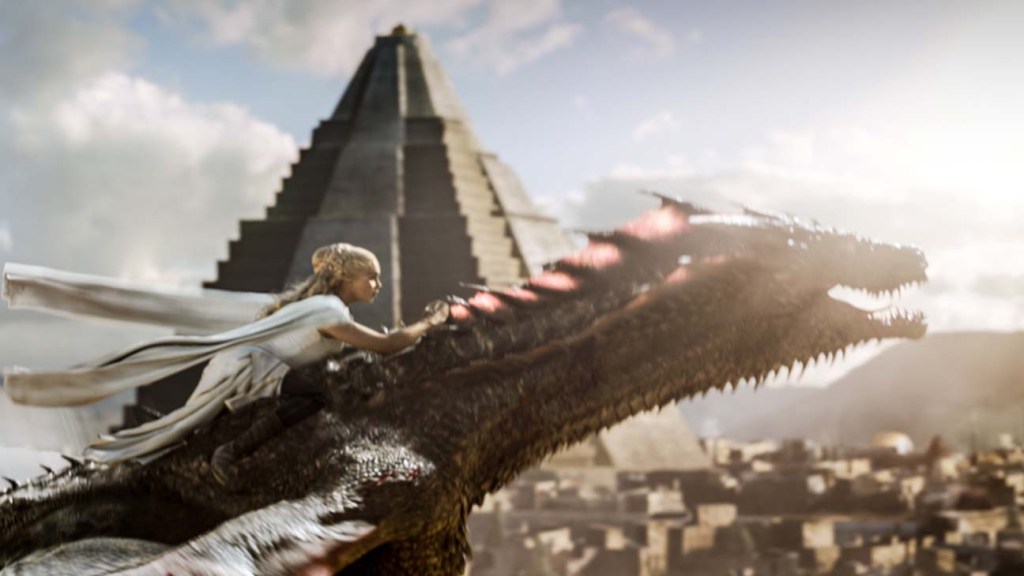 Names and Titles: Drogon, Rhaegal and Viserion, the final three dragons in the world of ice and fire, two of whom are alive, and one of whom is currently enjoying an afterlife as an ice dragon.

First Appearance: “Fire and Blood,” the season one finale. Daenerys Targaryen walks into her late husband Khal Drogo’s (Jason Momoa) funeral pyre, spends the night inside the flaming husk and emerges in the morning completely naked and unscathed with three infant dragons at her side, belching fire. These babies would go on to change the world — some for better, one very much for worse.

Last Appearance: “The Dragon and the Wolf,” the season seven finale. In the spirit of “very much for worse,” enter: Viserion, killed one episode earlier, reborn as the undead steed of the cold-blooded Night King. As the chariot of the White Walker commander, Viserion breathes unholy blue fire upon the great Wall of Westeros, knocking down a significant portion and allowing the Army of the Dead to finally pass through into the realms of men.

Best Friends: Each other, obviously! At least, that’s how it used to be, before they became divided on opposite sides of the great war. For Viserion, the only friend right now is the Night King and his minions. For Drogon and Rhaegal, they are unflinchingly loyal to Daenerys, and therefore to almost anyone of whom she approves. The two people at the top of the list, beyond Dany: Jon Snow (Kit Harington), which should come as little surprise given his secret Targaryen heritage, and Tyrion (Peter Dinklage), who shared a tender moment with Rhaegal and the then-alive Viserion during season six. It’s led some to wonder about Tyrion’s true connection to the beasts… we’ll get into that later.

Worst Enemies: As Cersei Lannister (Lena Headey) might say: “Anyone who isn’t us is our enemy.” Except take that philosophy and plug it onto the side of House Targaryen. For Drogon and Rhaegal, Cersei and her loyalists are second only to the Night King’s forces. For Viserion, anyone with a pulse is in big trouble. 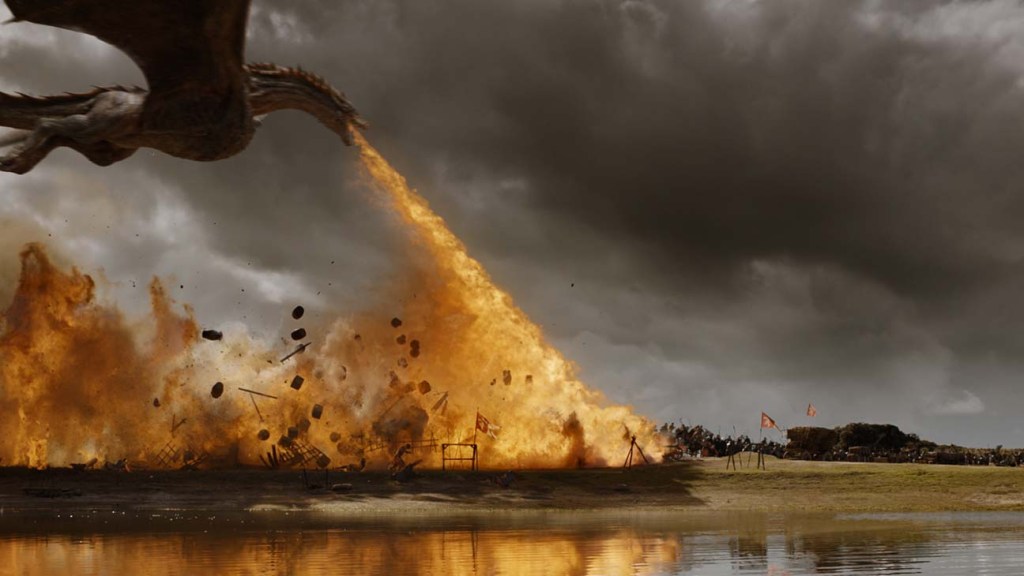 Best Kill: The dragons have enjoyed their fair share of death and destruction, so it’s hard to pick just one moment. Perhaps it’s their first major kill at the House of the Undying, destroying the warlocks and putting an end to their blue raspberry-mouthed reign of terror. Maybe it’s the dragons’ last time fighting together on the same side, crushing wights north of the Wall in season seven. For my money, it’s the season three execution of Unsullied owner and slaver Kraznys mo Nakloz (Dan Hildebrand) in Astapor, burned alive by Drogon with a single command from Daenerys: “Dracarys.”

Worst Wound: Drogon has sustained some abuse over the years, from some javelin wounds in Meereen to a crossbow bolt in the Reach. With that said, the most obvious wound is the one that felled Viserion from the sky: an ice lance through the heart, extinguishing his fire and setting the stage for his undead return.

Critical Moments: Their birth, for one. Daenerys entering the pyre and emerging with dragons at her side was and still is one of the most magical moments in all of Thrones, shifting the series from its gritty drama into a more fantastic bent. As they continued to evolve across the series, so too did Dany’s own priorities, inching her ever closer to Westeros. Now, the dragons are as wrapped up in the final conflict as anyone else, with loyalties divided on both sides of the war — and with at least one of the dragons still waiting for a rider. Speaking of which…

Unresolved Mystery: Who will ride the dragons? Drogon has Daenerys and Viserion has the Night King, but is that the end of the story? Jon Snow seems primed and ready for a trip through the skies, given his growing closeness with the winged beasts in season seven, not to mention his own connection to the Targaryen line. Is that the end of the story, or is there another? 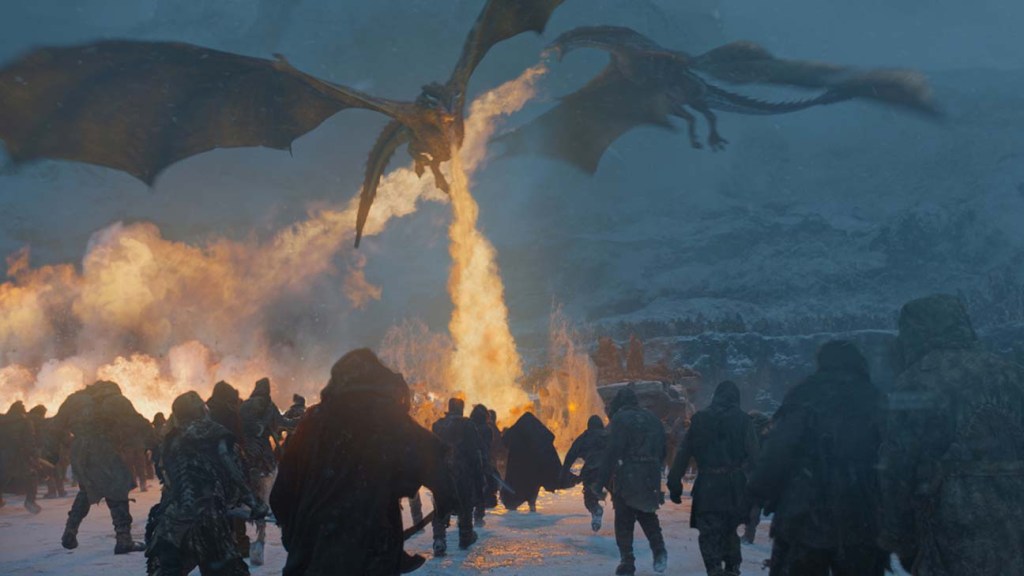 Final Predictions: Let’s stick with the dragon-riders for a moment. First of all, Jon Snow will ride a dragon. That’s easy enough to predict. He’s the new Aegon Targaryen in town, after all, the true heir to the Iron Throne. With fire in his blood, the King in the North’s future flight plans is right up there among the easiest shots to call heading into the final season — and given his father is the late Rhaegar Targaryen, you can bet that Jon and Rhaegal the dragon are going to have a lot to bond over.

How about some other dragon-riders… like Tyrion, for instance? Certain theories suggest he’s also a son of House Targaryen, though the odds of such a development occurring on Game of Thrones feel much lower than they are in the George R.R. Martin novel series on which the show is based. (For anyone who needs a refresher on the theory, look no further.) With six episodes still standing, there’s plenty of room for surprises — but Tyrion emerging in these final 432 minutes as a late-stage member of House Targaryen feels like one surprise too many. Scratch it from the predictions list, but keep it in mind just in case.

Daenerys Targaryen, Jon Snow and the Night King. Feels like enough riders for Drogon, Rhaegal and Viserion, right? Wrong. There is another, as Yoda would say: Bran Stark (Isaac Hempstead Wright). In his first meeting with the Three-Eyed Raven, the mystical tree wizard informed Bran: “You will never walk again … but you will fly.” Technically, Bran has already fulfilled that promise, thanks to his ability to warg into ravens and spy on the Night King’s army. His power to sift through time and glimpse visions of the past could qualify as “flight,” under certain interpretations. If that’s the extent of it? To quote another presently popular television character: “Lame.”

If Jon Snow flying Rhaegal is one of the most bankable predictions heading into the final season, then Bran warging into a dragon is right up there. The scenario in which he transfers his consciousness into the undead Viserion, crashes the creature into the ground and derails the Night King’s plans is easy enough to imagine. Does it have to be so destructive? Maybe not; maybe Bran, who is more magic than man these days, will end up fully inhabiting Viserion’s form post-warging, giving him yet another form of continued life. There’s an old Thrones prophecy still to consider: “The dragon has three heads.” Three lives — one on his own, one under the Night King’s rule and a final one as Bran — would fit the bill, albeit oddly.

Ultimately, we’ll call it for Viserion not surviving Game of Thrones, due to the larger prediction that all of the dragons will die. The dragons were gone for a long, long time before Daenerys all but willed them back into existence. Why did they return at this moment, at this time? For their greater purpose in the great war against the Night King, most likely — and once that purpose is served, and once Dany is able to unify the Seven Kingdoms under a more peaceful reign than has been glimpsed in some time, the age of the dragons may once again draw to a close. Enjoy them while they’re here, folks, because the dragons, once thought extinct, will go back to sleep before long.

Last Hope: For a series-ending flash-forward into the future of Westeros, in which a descendent of Daenerys Targaryen and Jon Snow uncovers a new set of dragon eggs, offering the promise of magic’s eventual return to the realm.