[This story contains spoilers for the final season premiere of HBO’s Game of Thrones, “Winterfell.”]

We’re a long way from Game of Thrones‘ frozen beginnings, if it wasn’t already clear from the many callbacks between “Winterfell” and “Winter Is Coming.” But there’s no better way to track the HBO drama’s evolution than peering past the White Walkers and looking right into the eyes of the fire.

Daenerys Targaryen (Emilia Clarke) and her dragons have been a central fixture in Game of Thrones since the first season, when the winged creatures first burst to life in the season one finale, burped fire as toddlers in season two, roasted guilty and innocent men, women and children in the subsequent seasons, and even incinerated an entire army of slavers in season six. In season seven, the series even parted ways with one of the dragons, at least in a manner of speaking: Viserion, killed by The Night King, only to return as a resurrected ice dragon. The dragons’ latest act: shepherding Daenerys and Jon Snow (Kit Harington) on the hottest date the North has ever seen. It’s a rare moment of bliss for the two Targaryens, and one that’s not likely to last, given what’s at stake in this final season.

Who is responsible for maintaining the dragons? Depends on who you ask. In the context of the story, Daenerys and the Night King are the masters of their respective beasts. Far away from Westeros, in the greater realm of people tasked with crafting Game of Thrones, several parties have had a hand in the dragons and their evolution across the series. Among those parties: VFX supervisors Joe Bauer, Steve Kullback and the various vendors under their supervision — including VFX house Pixomondo, a key cog in the Game of Thrones machine since season two.

The Hollywood Reporter spoke with Pixomondo’s VFX supervisor Sven Martin about the joys and challenges involved in bringing the most fantastic beasts in Westeros to stunning life. 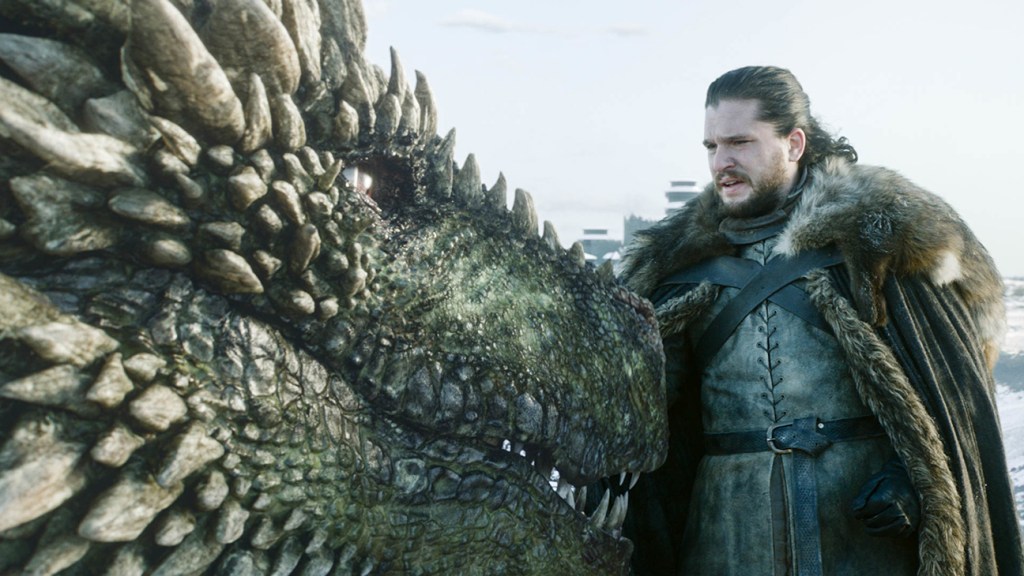 What would surprise the audience most about your work on Game of Thrones, and how the dragons are brought to life?

I think what most people can’t imagine is, how many different living animals influenced the dragons. Birds and bats were used as flying reference and for anatomy studies, multiple types of lizards and crocodiles were used as models for skin structure and details, and even cheetahs were used as texture patterns. HBO production VFX supervisor Joe Bauer, for example, came up with the idea to add unfolding frills to the dragon design as threatening posture — a feature also existing in nature on the so called “frilled lizards.”

What has been the biggest obstacle in creating the dragons and charting their evolution from babies in season two to full-grown creatures in the final seasons?

No real obstacles, but challenges. Going back to season two, I’d say it was continuing a baby creature without really knowing how it will look like as grown up. With every new season, Joe explained to us the new main focus of the dragon evolution, particular their behavior. Technically, the main challenge was to add all the extra detail which increased drastically with their every year’s growth. For example, one single chest scale of the adult dragon is roughly the size of the full baby dragon in season two.

Do you have a favorite era of the dragons?

Not really. It’s like answering which is the favorite age of your kid; even when they are teens and start to rebel and turn against you, they still have their lovely moments! I like them as cute babies and am proud of their majestic and gritty, but still beautiful, appearance as adults.

What kind of coordination is involved between Pixomondo and the filmmakers on set in order to bring the dragons to life?

Joe Bauer is a big fan of shooting as much as possible for real, and I totally support this approach. The dragon fire, swirling dust or splashing water — everything [like that] is shot by a fantastic special effects team. To get a perfect blend between digital and practical elements, motion control systems were used to drive flame throwers or a motion buck replicating pre-animated dragon movements. Even if we had to change or augment these elements afterwards, a 100 percent realistic base is set.

Every season, the dragons grow more and more, as does the audience’s attachment to the creatures. How do you explain the fans’ investment in the dragons? For example, it’s hard to imagine a moment from recent Game of Thrones history more moving than Viserion’s death in “Beyond the Wall.” What’s your theory for why the viewers have become so attached to these creatures?

I was totally surprised to see how the dragons became fan-favorites after season two. They had so little screen time but had a huge impact, nevertheless. It’s great to see that all the effort pays off in the way we wanted the dragons to be recognized: as living, breathing animals right beside the cast.

How about your own emotional investment in the dragons?

Maybe it was good that another VFX house had to kill Viserion in the frozen lake sequence, because our hearts did bleed a bit seeing his death in early previs. I think every artist has his own very special connection with the dragons. The sculptors, for example, know every inch of them, detailing every little wrinkle and are familiar with areas we might all have never seen on screen. The animators had to go with them through all kinds of different adventures and situations and had to get into their character while animating — up to the point where we did act out difficult scenes by ourselves and recorded this on video as reference. Lighting and compositing artists spent a lot of time setting the dragons in the right mood, revealing them from the dark and making them look majestic and gorgeous. Personally, this whole journey will be an everlasting experience for me, and I’m more than grateful that Steve Kullback and Joe Bauer let us contribute to this epic series for these seven years.

The final five episodes are still waiting off in the distance. Is it safe to say the fans have not yet seen your most complicated work on the series?

Nice try. (Laughs.) I’m sure we’ll all get the breathtaking conclusion this series deserves.