Mankind’s last stand against the Army of the Dead is on its way — and based on photos from the highly anticipated Game of Thrones episode, it doesn’t look likely to end well for the forces of the living.

HBO has released six new photos from the upcoming episode, directed by “Hardhome” and “Battle of the Bastards” helmer Miguel Sapochnik, which promises to be the most action-packed installment in the series’ history. Clocking in at 82 minutes, Game of Thrones‘ newest battle-heavy outing is said to rival Lord of the Rings: The Two Towers‘ Helm’s Deep sequence — high praise, and even higher stakes as we start forecasting what’s ahead for Jon Snow (Kit Harington) and his allies’ chances against the Night King.

With that said, Lord Snow himself looks well and thoroughly exhausted in the run-up to the big fight, his hair a mess, cloak withdrawn, blood and muck scrawled on his face with the glow of fire behind him. It’s a far cry from how he appears in another of the photos, in which he stands next to Daenerys Targaryen (Emilia Clarke), fully cloaked and watching Winterfell from a fairly comfortable distance. It jives with his plan, as laid out in “A Knight of the Seven Kingdoms.”

In that episode, the heroes come up with a plan for Bran (Isaac Hempstead Wright) to lure out the Night King, with Theon Greyjoy (Alfie Allen) and the dragons nearby as back-up. No sign of Theon, nor of the dragons, but Jon and Daenerys both look like they’re in place to make their move on the White Walkers’ leader when the time arrives. The fact that Jon is pictured in this relatively comfortable space, while looking completely exhausted and in the thick of the battle in another photo, is as strong a sign as any that the carefully laid plan is about to go south, and fast. 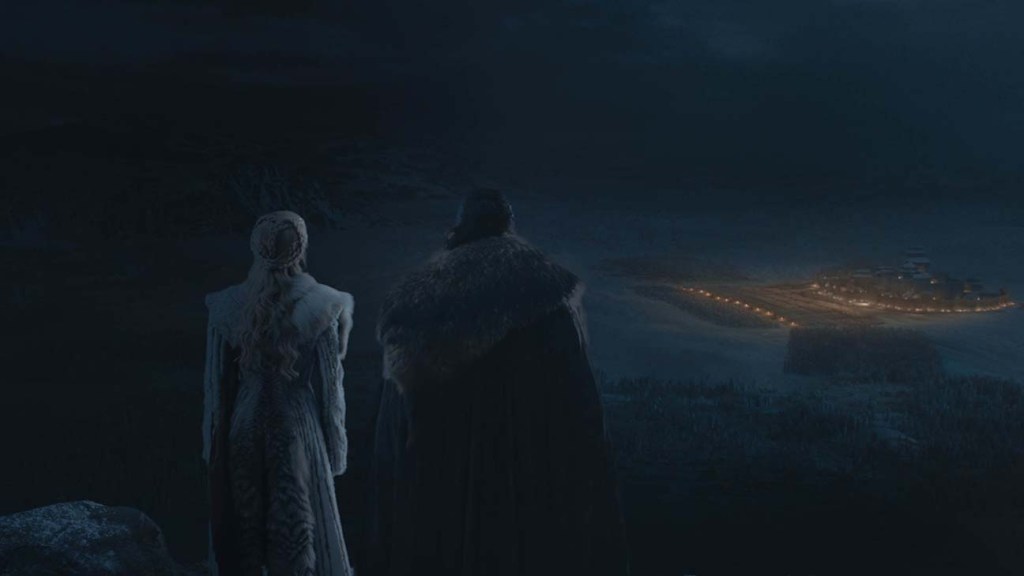 The working theory: Jon Snow starts the battle in position to help Bran, but something happens back at Winterfell that forces him away from the plan. (Wouldn’t be the first time Jon’s veered off course in the thick of battle. Heck, not even the first time it’s happened in a battle set at Winterfell!) What’s the nature of the disaster, you ask? Perhaps it comes down to the current whereabouts of two other fan-favorite characters … 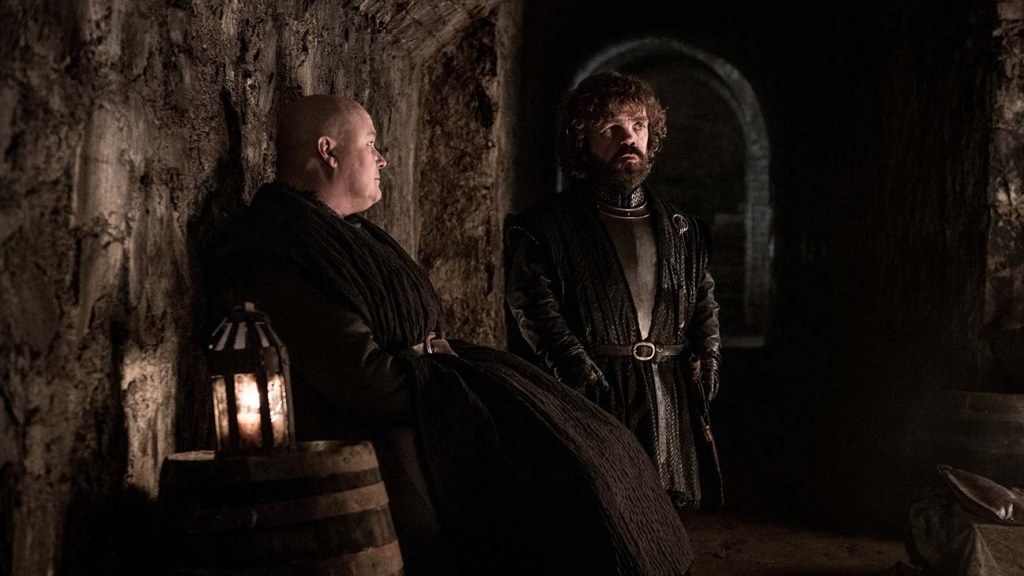 Varys (Conleth Hill) and Tyrion (Peter Dinklage), together in the crypts, supposedly the safest place in Winterfell. That reputation stands to be put to a major test in the episode ahead; it’s speculated that the bones of old Stark lords will rise at the Night King’s command, wiping out the innocents doing their best to protect themselves from the fight. At the very least, we have predicted that this is the place where we’ll lose Varys for good; we would be more than happy to be proven wrong.

Check out the rest of the Winterfell war’s photos, featuring Ser Brienne of Tarth (Gwendoline Christie) leading her army alongside Jaime Lannister (Nikolaj Coster-Waldau), as well as the Stark sisters in the thick of the fight for the soul of their home. 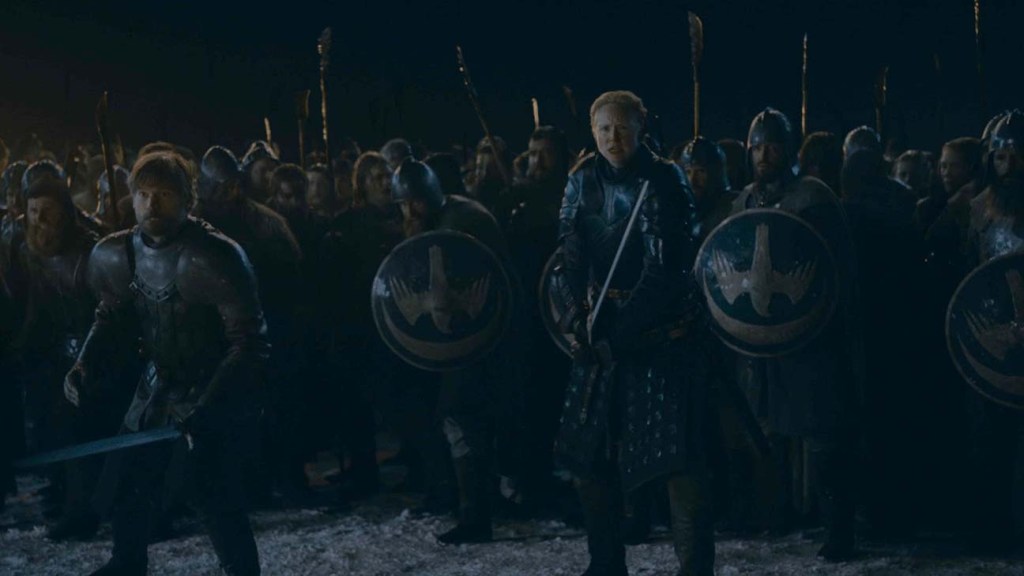 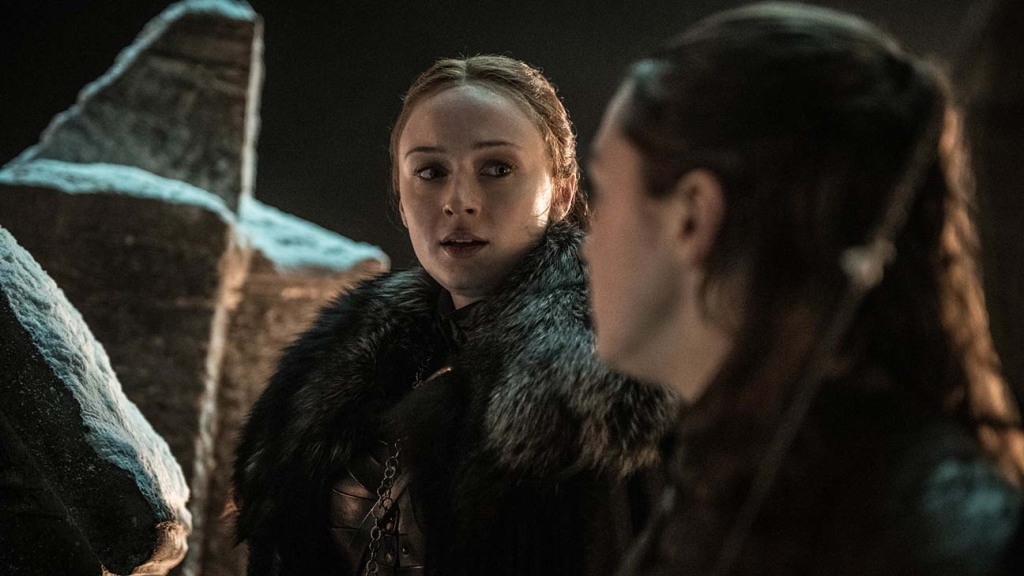 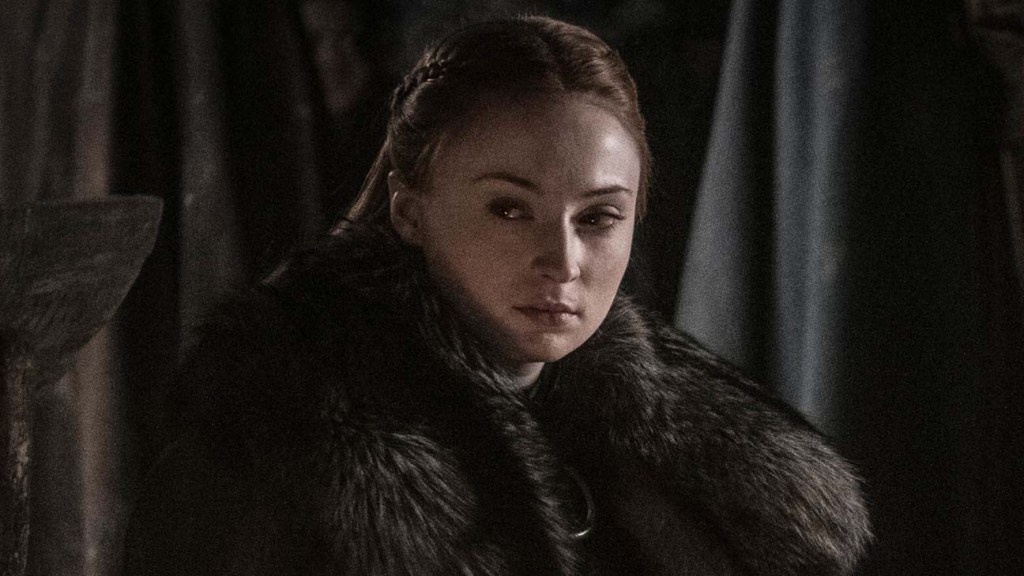