Welcome to Final Path, a regular feature leading up to the final season of HBO’s Game of Thrones. In every Final Path, The Hollywood Reporter‘s resident Westeros expert Josh Wigler will offer a character-by-character deep dive of their journey through seven seasons, as well as what can be expected in the upcoming eighth and final season. Up next: Sandor Clegane, the Hound.

“You know who’s coming for you. You’ve always known.”

So speaks Sandor Clegane, better known as the Hound, one of the most enduring characters in Game of Thrones lore. First appearing in the series premiere, Rory McCann’s hulking antihero has enjoyed one of the most transformative arcs of any character — if enjoy is the right word for it. From killing a child in cold blood to protecting a different child at all costs, the Hound only needed to almost die for him to walk away from his warrior life. Thanks to Brother Ray (Ian McShane) and his flock, Sandor was able to put the Hound away… but not forever.

Following the slaughter of Ray’s flock, the Hound picked up his sword again (or his axe, as it were) and joined a new battle: the one against the Army of the Dead, fighting alongside the Brotherhood Without Banners. Now, with six episodes remaining, the Hound is one of the best-equipped fighters to take on the White Walker threat — assuming he doesn’t get squashed beneath a Mountain first.

Read on for the official Final Path predictions for the Hound’s final season storyline, as well as a look back on all his deeds, dark and heroic alike. 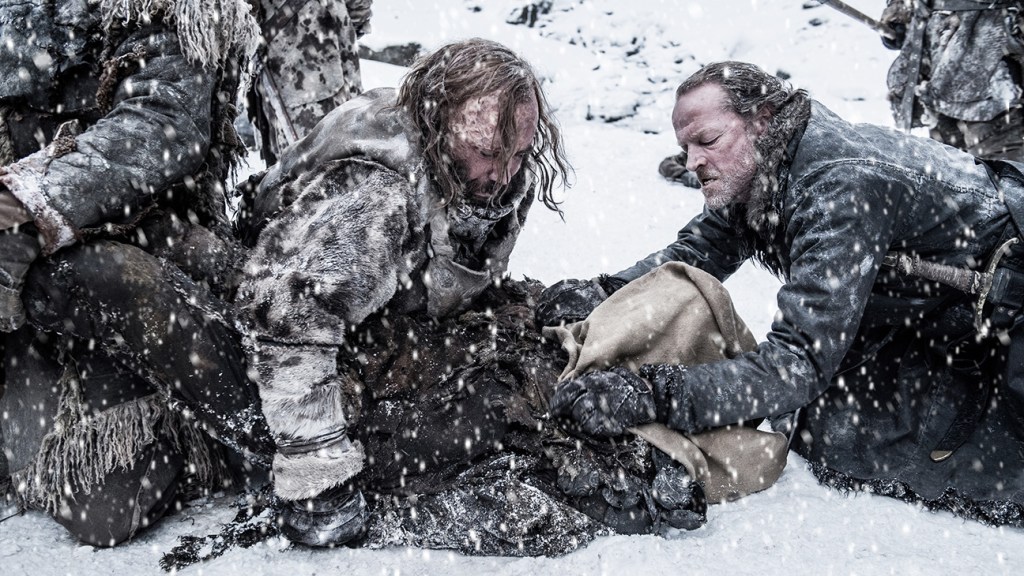 Names and Titles: Sandor Clegane, best known as “The Hound,” former bodyguard to Joffrey Baratheon (Jack Gleeson), briefly a part of the Brother Ray congregation, currently a wandering warrior reluctantly affiliated with the Brotherhood Without Banners.

First Appearance: “Winter is Coming,” the series premiere. The Hound arrives at Winterfell along with King Robert (Mark Addy) and his crew, charged with protecting the wicked prince Joffrey (Jack Gleeson). The Hound doesn’t truly emerge from his shell until the second episode, when he stands by as Tyrion (Peter Dinklage) smacks Joffrey around. (For those who have not seen the loop of this scene, do yourselves a favor and change that. Very satisfying.) He doesn’t do much in the way of retaliation then, but the Hound makes his deadly bite known by the end of the episode, after he’s run down and killed an innocent butcher’s boy on Joffrey’s behalf. He shows no remorse for the act, only offering these horrible words: “He ran… not very fast.”

Last Appearance: “The Dragon and the Wolf,” the season seven finale. The Hound is an unlikely key player in the meeting between the Daenerys (Emilia Clarke), Jon (Kit Harington) and Cersei (Lena Headey) armies at the Dragonpit, presenting the imprisoned wight as proof of the Army of the Dead. First, he stares down a different dead man: his own brother, Gregor Clegane (Hafþór Júlíus Björnsson), dead-eyed and zombified.

Best Friends: Really, he doesn’t have any. I know it’s a thing I say here often on Final Path, but for the Hound, it’s true. There are people he tolerates more than others, but that’s as close as it gets. Cases in point: Beric Dondarrion (Richard Dormer) and Thoros of Myr (Paul Kaye), though one of them is definitely dead these days, and the other one’s fate is currently unknown. Based on the season seven finale, it looks like the Hound and Brienne of Tarth (Gwendoline Christie) may be able to settle their previous grievances, though a friendship? Hard to see. The Hound may have a soft spot for the Stark sisters Arya (Maisie Williams) and Sansa (Sophie Turner), despite their own differences in the past. What will their reunions look like? Some thoughts ahead in the final predictions.

Worst Enemies: The Mountain is number one with a bullet. Nobody else matters. 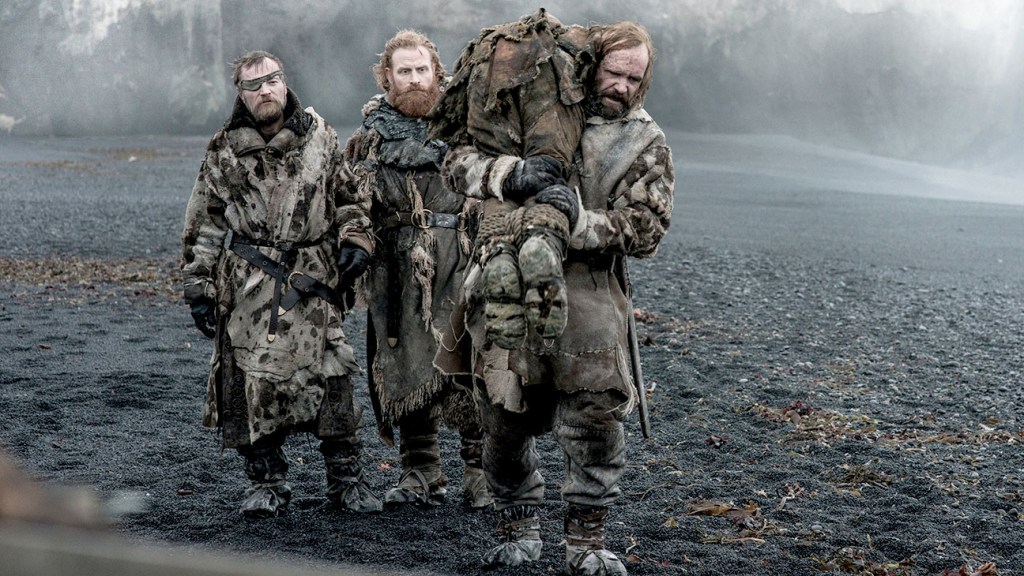 Best Kill: It’s a long list — which is another thing that’s often said here on Final Path, but, again, it’s true! The Hound disemboweling someone in order to save Sansa back in season two stands out as one of the character’s earliest and most noteworthy murders. His trial by combat against Beric Dondarrion is another standout, even if Beric returned from the dead moments later. Above all else, may we never forget about all the chickens he fought so hard for back in the season four premiere.

Worst Wound: If there was a category for “best fight scene,” the Hound’s battle against Brienne of Tarth would be at the top of his list. Luckily for us though unluckily for Clegane, that battle doubles as the Hound’s worst wound, as he was thrown off a cliffside and left for dead. His injuries were severe enough that he was missing for an entire season, presumed dead, until his return via Brother Ray (Ian McShane) in season six.

Critical Moment: The course of the Hound’s life was forever altered thanks to an event from long before Game of Thrones began: his brush with fire at the hands of his brother. It’s not just his face that ended up scarred, but his heart, too. After losing so much inner and outer peace, Sandor Clegane was destined for darkness — both weathering it and creating it. There’s nothing he can ever do to atone for killing the butcher’s boy, for instance, but the deep trauma rooted in Sandor’s past at least helps to explain how he was capable of such monstrousness.

Unresolved Mystery: We know the Hound and the Mountain are going to battle each other to the death. There’s no question about that. But is it the sole reason why the Hound is still alive? There has to be a greater purpose to his return to Thrones, otherwise why not let him drift off into the unknown, left for dead by Arya back in season four? “The gods aren’t done with you yet,” as Sandor has been told. But why? What’s his purpose in the Game of Thrones endgame? 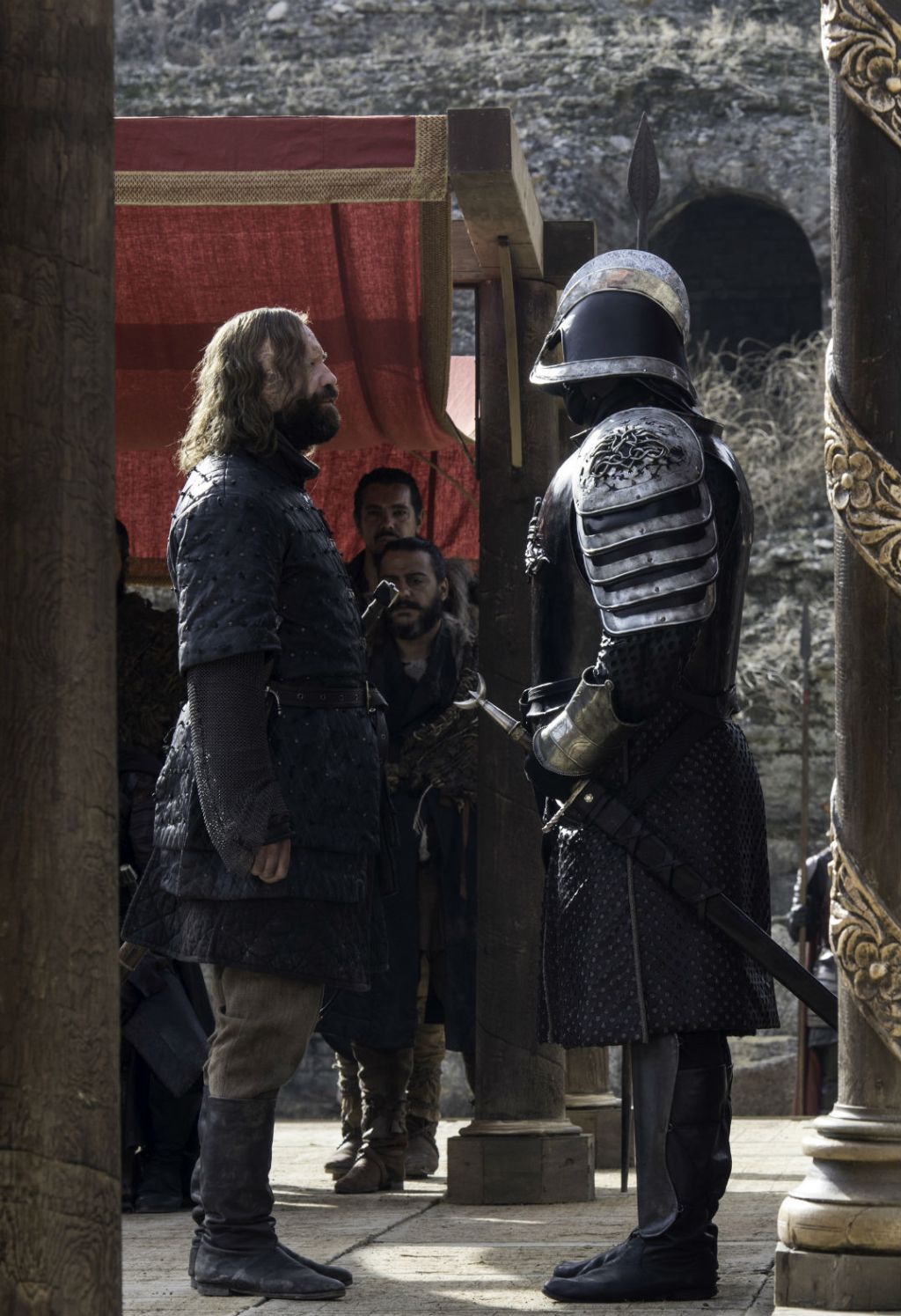 Final Predictions: We could sit here all day wondering about the Hound’s various final season interactions. Will he get to see Arya and Sansa again? Certainly. Will he have an awkward moment with Jaime (Nikolaj Coster-Waldau) in which he lewdly reminisces about Joffrey? One can hope so. Another scene with Tyrion in which the two of them laugh about the time the Imp smacked Joffrey around like a rag doll? Please, yes.

For those who have somehow missed the boat on the much-hyped event, the Cleganebowl is the fan-dubbed term for the final battle between Sandor and Gregor. No such battle exists in George R.R. Martin’s books, and indeed, may never exist even if the author finishes his series; it’s suggested that the Hound is still alive, albeit unconfirmed, and he’s left in such a way that his reentry to the story is a little hard to see. For the show, however, the Hound is well and fully back in action, as is the Mountain in the form of Robert Strong. The two brothers finally reunited, albeit briefly, and threw down verbally. If looks could kill, both men would be extraordinarily deceased.

If Cersei (Lena Headey) was sincere in her desire to help the armies of the living fight against the dead, then perhaps Sandor and Gregor would be able to find some brotherly love — though even then, not likely. The fact that Cersei outright plans to betray Jon Snow (Kit Harington) and Daenerys (Emilia Clarke) means the Mountain will be marching against the folks the Hound supports.

In other words, get hyped, as the children like to say — because the Cleganebowl is real. It’s happening.

We aren’t going to see some sort of organized trial by combat between the brothers. But the series will not end without them meeting each other on the battlefield. Perhaps it will be in the thick of the White Walker war, or perhaps it will happen if Cersei strikes once the Night King has already been defeated. In any event, it’s fair to expect Cersei’s schemes will railroad the alliance of the living at the worst time imaginable, with the Mountain serving as a one-man wrecking ball. The one person who can stop him: Sandor Clegane.

Who will win the Cleganebowl? There’s reason to bet on the Mountain, given his track record in the series. (Rest in pieces, Red Viper.) But with six episodes remaining, it’s time for the bad guys to start falling by the wayside. With that said, the Hound is our pick to win the fight. He’ll do most of the damage, and it will almost certainly require some measure of facing his fear of fire. The Hound will triumph, but not without a much-needed assist from an old friend: Arya Stark, who still has the Mountain on her list and will be there to cross him off. Arya stepping in to kill off the Mountain and save the Hound from certain death would be a wonderful way to cap off that whole story arc, especially after she left him for dead back in season four.

What happens from there? Well, if you’ve read our predictions for Arya, then you already know we think her victory dance will be cut short. But her death after helping the Hound will only galvanize the man further as he continues his road of atonement. Will he ever find true redemption? It simply might not be possible for someone with his amount of baggage. But the Hound is one of the show’s best examples of the idea that a lifetime of bad deeds doesn’t close off the possibility of doing good in the now and continuing to do good in the future. With that said, we predict the Hound will survive the series, serving out the rest of his life in service of Sansa Stark in the North. It won’t make up for all of his bad deeds… but it’s a start.

Last Hope: For the Hound to eat every damn chicken in Westeros.